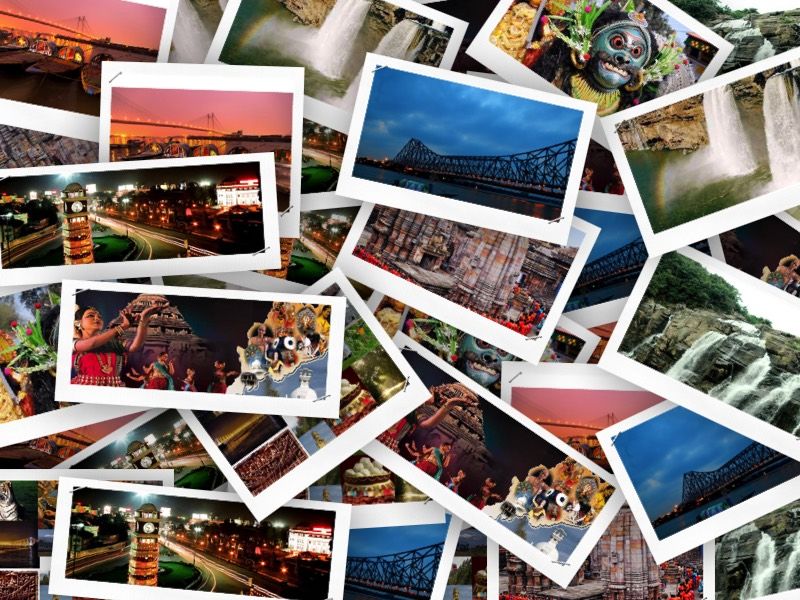 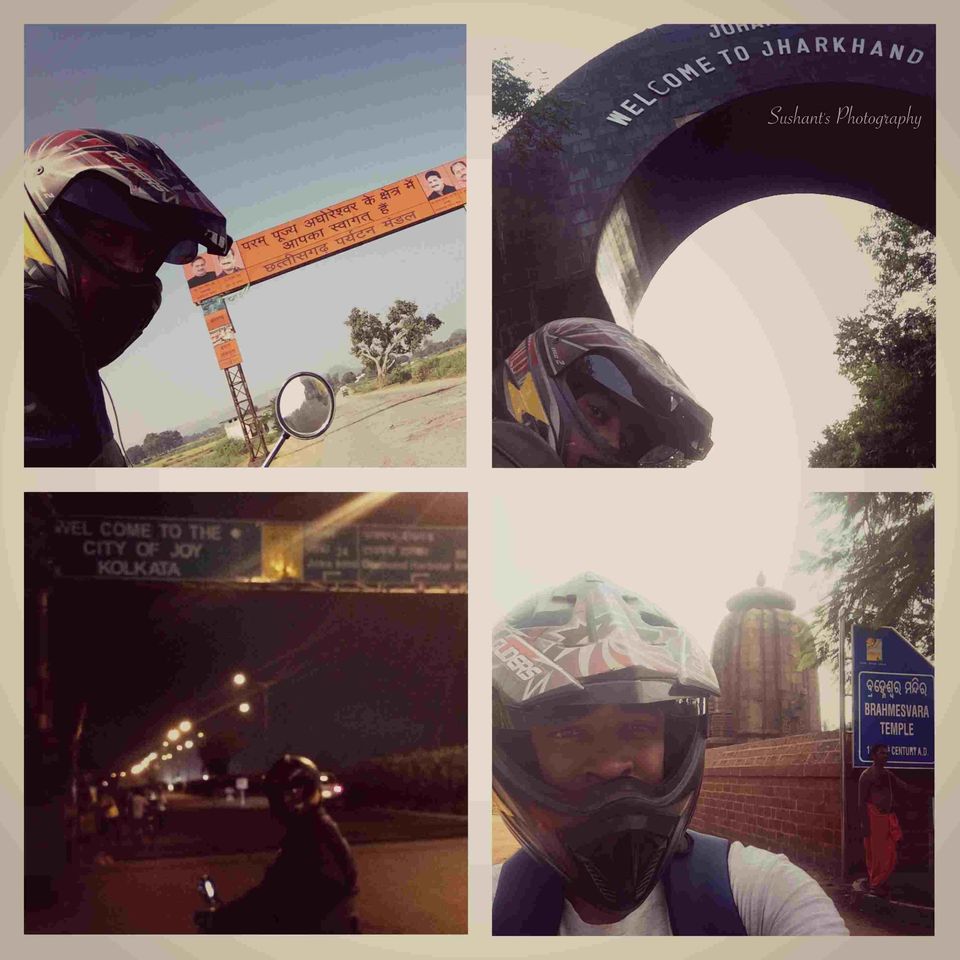 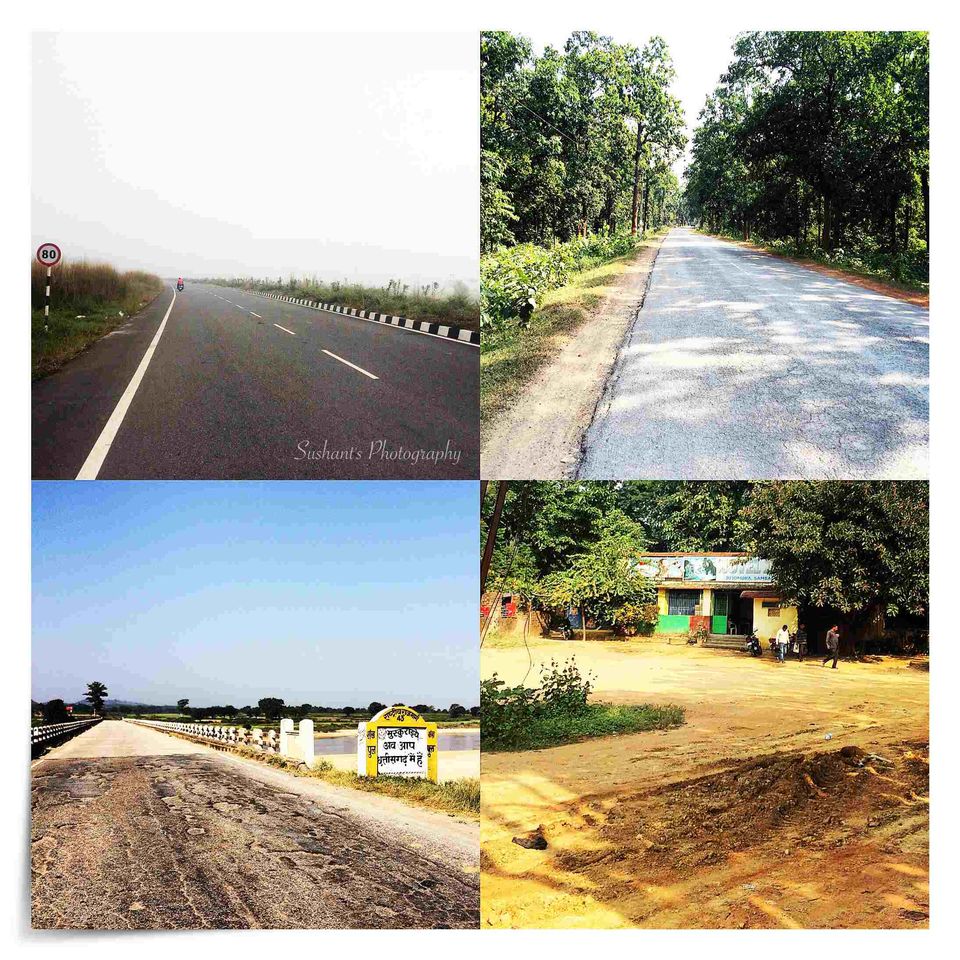 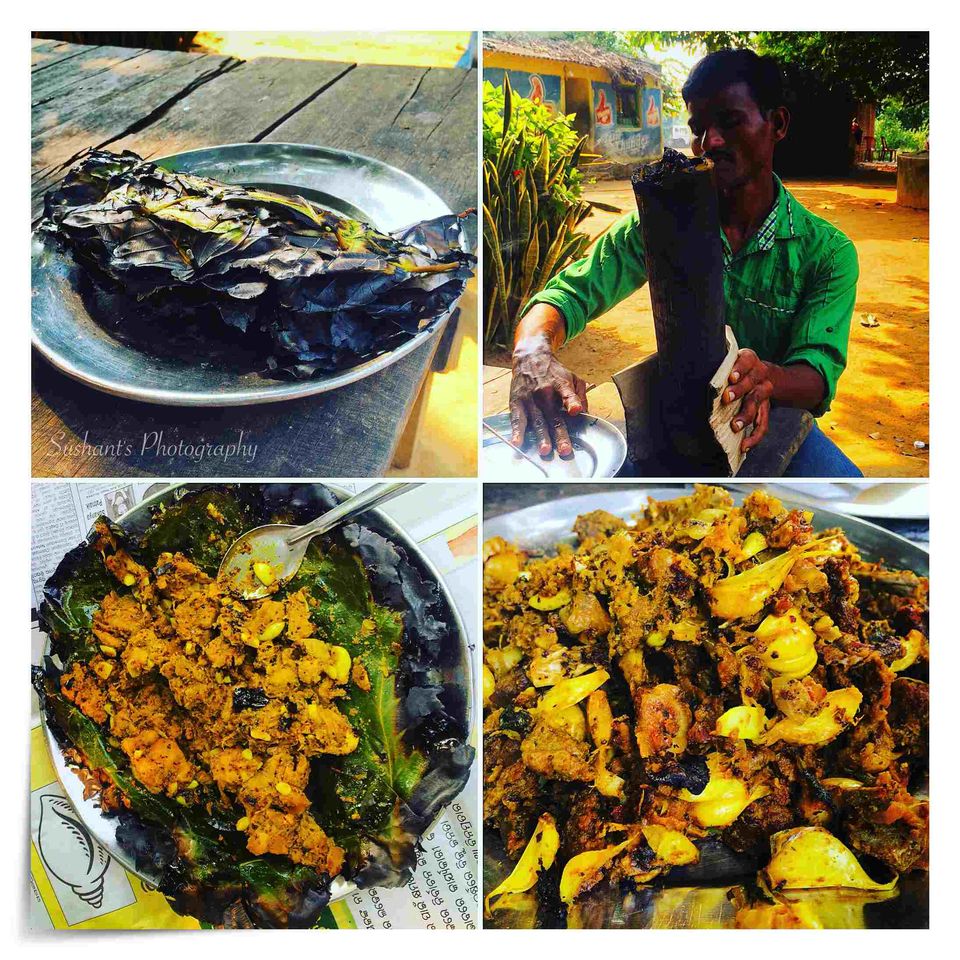 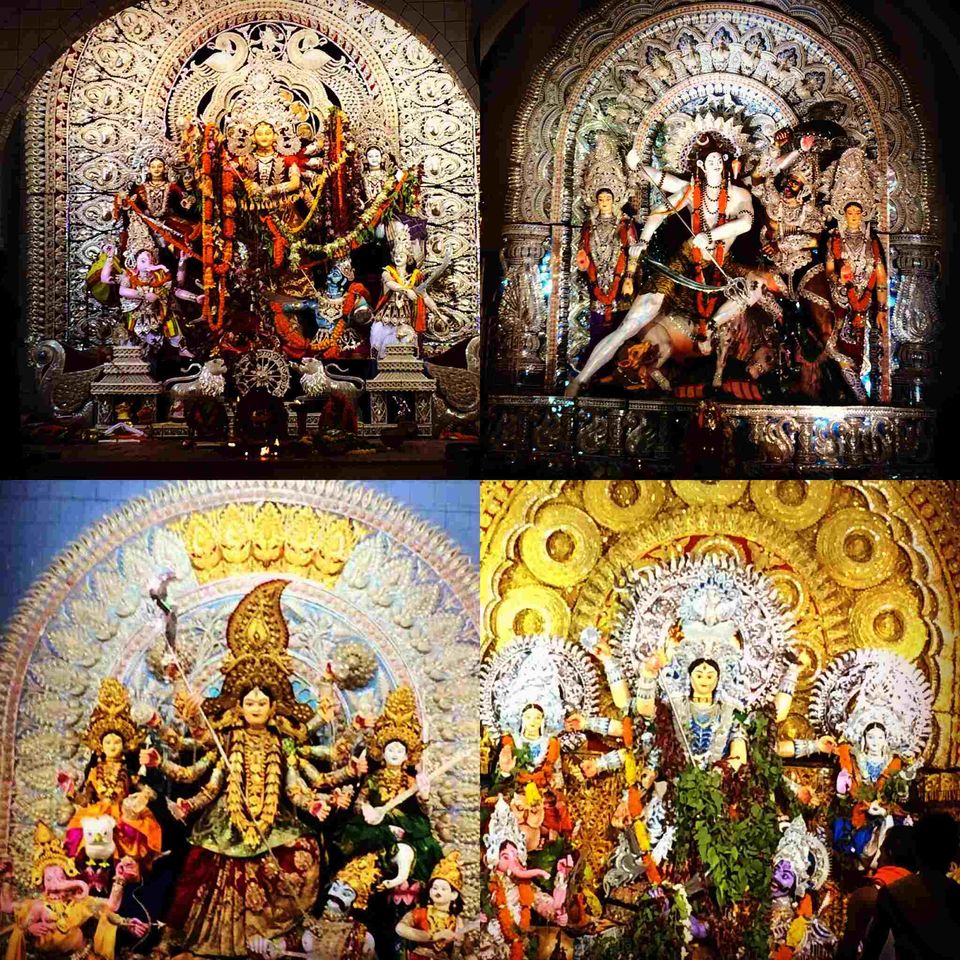 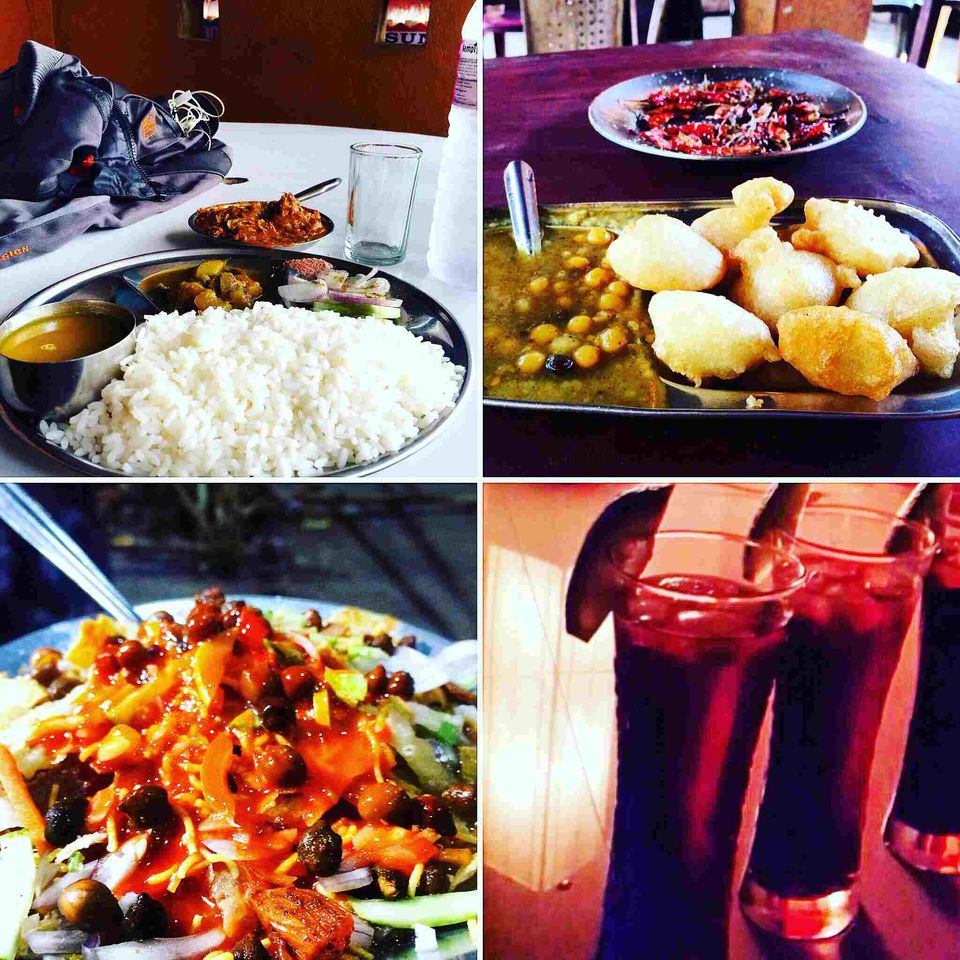 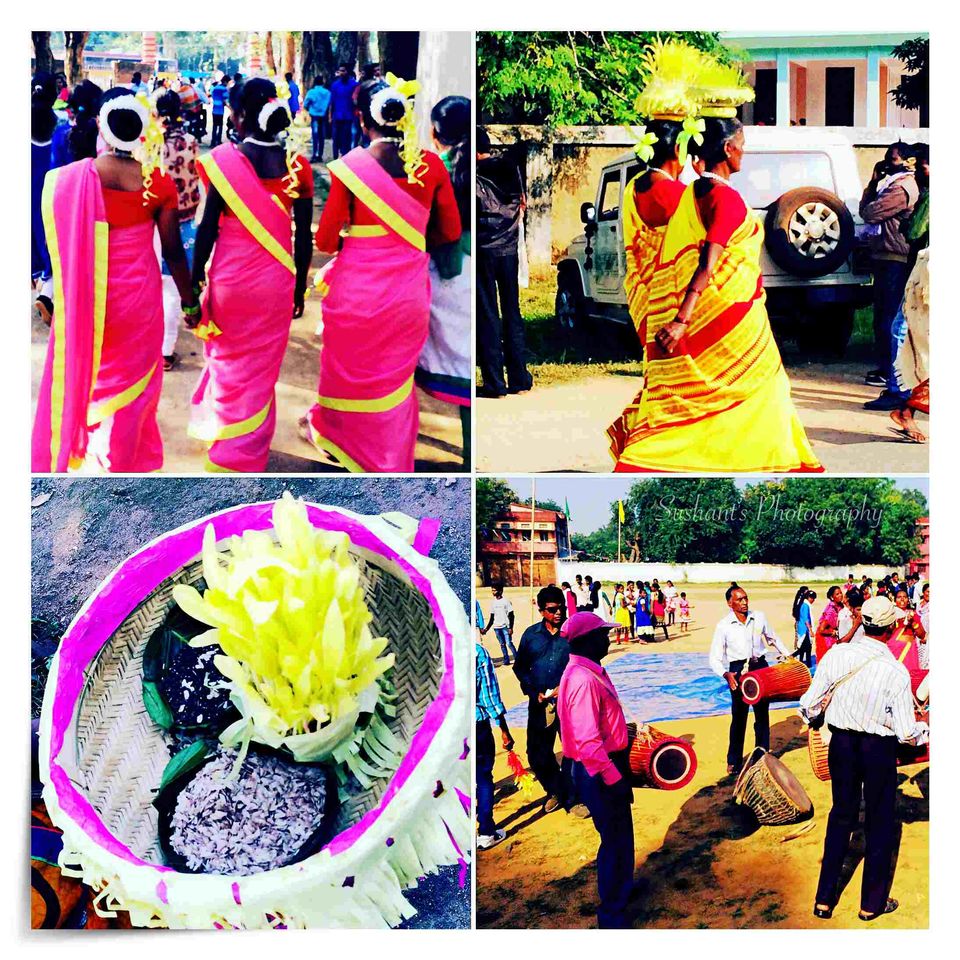 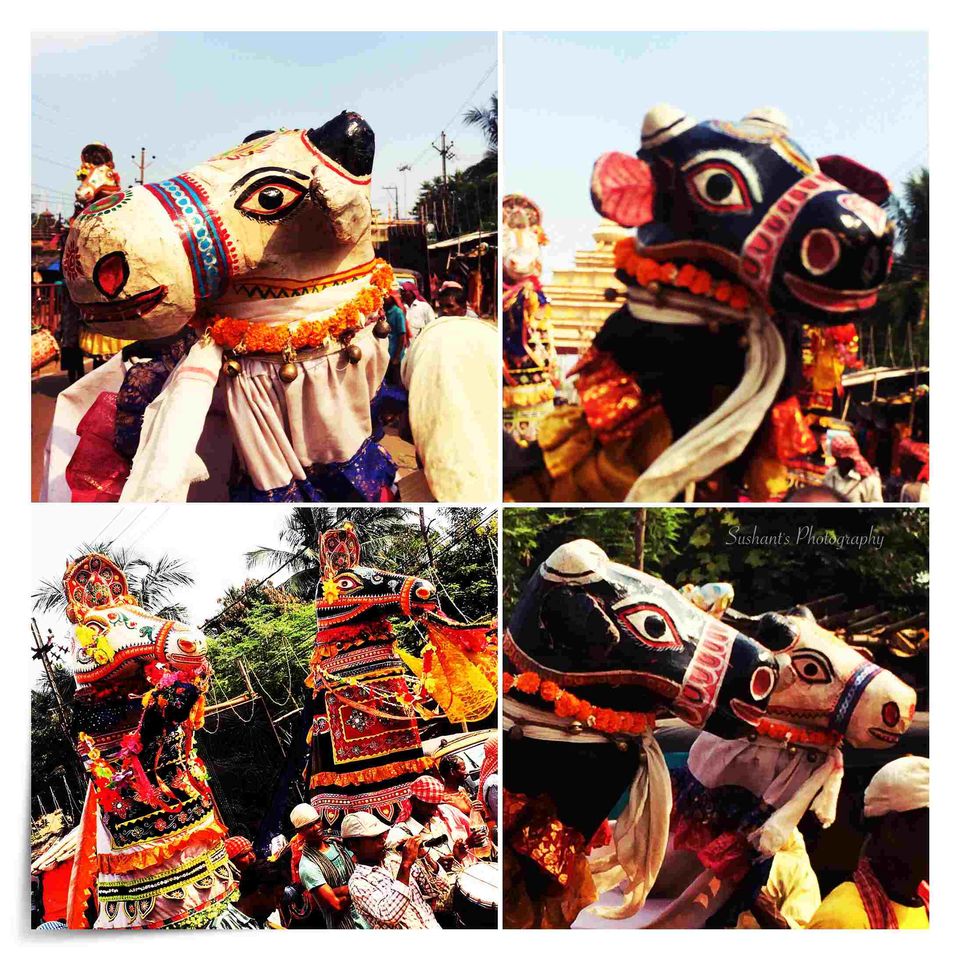 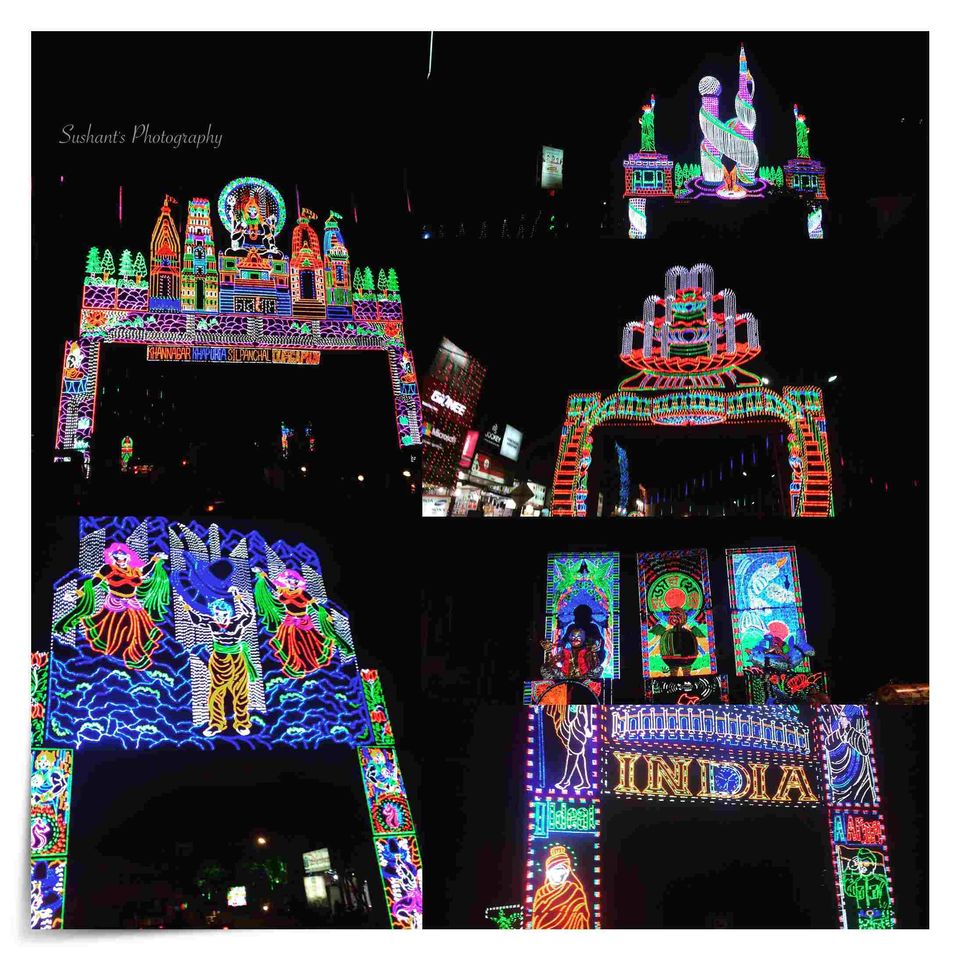 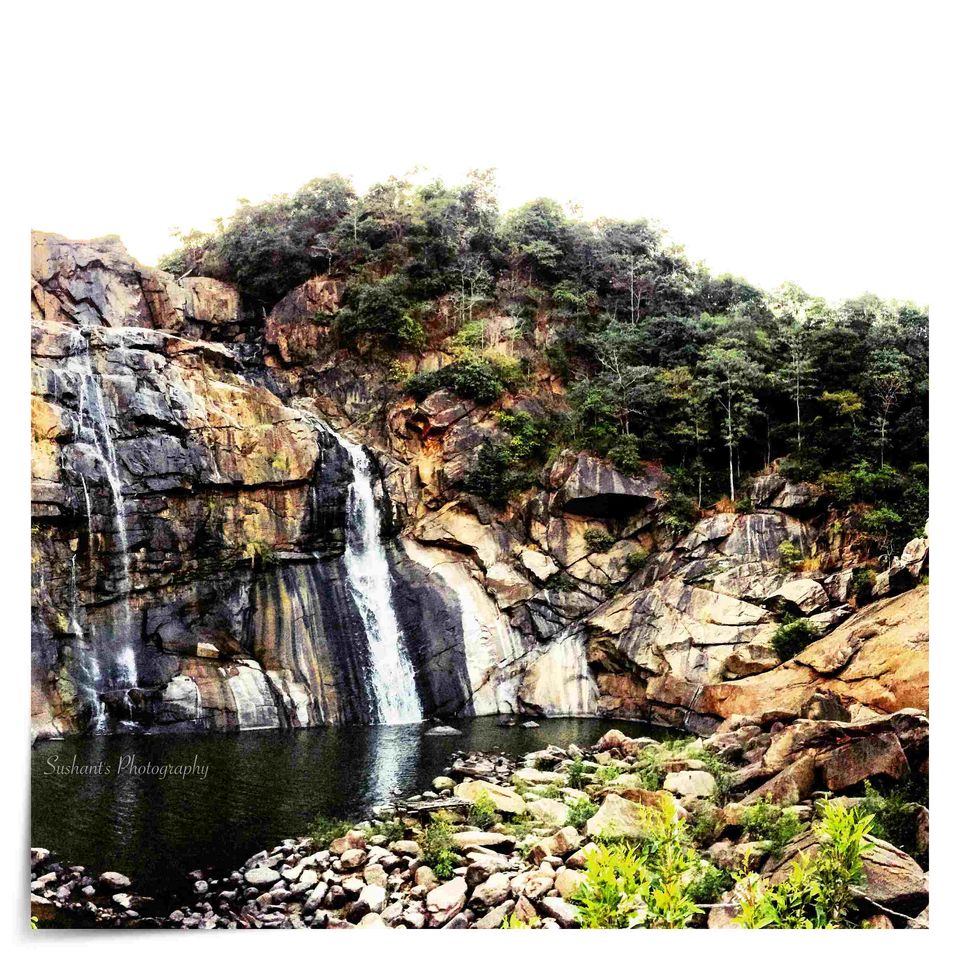 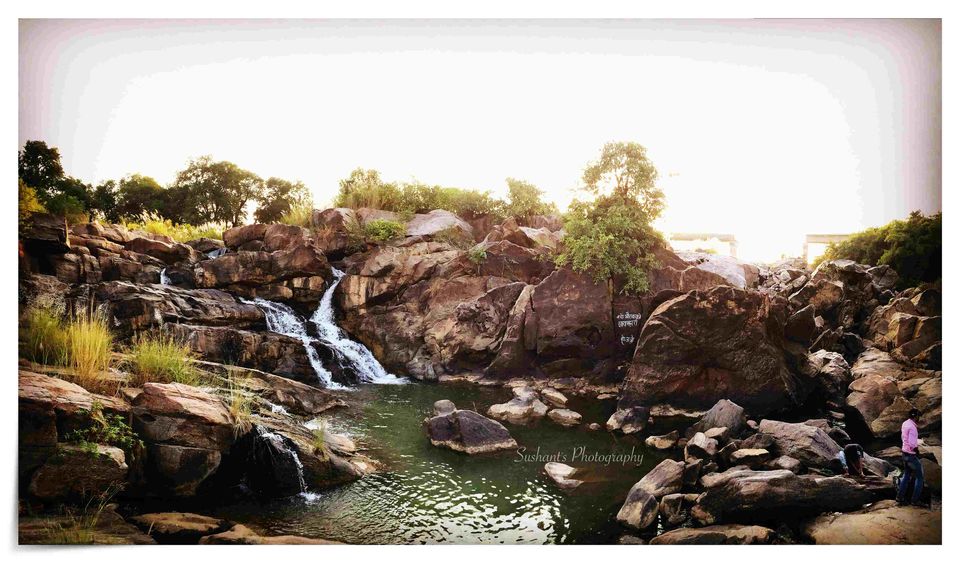 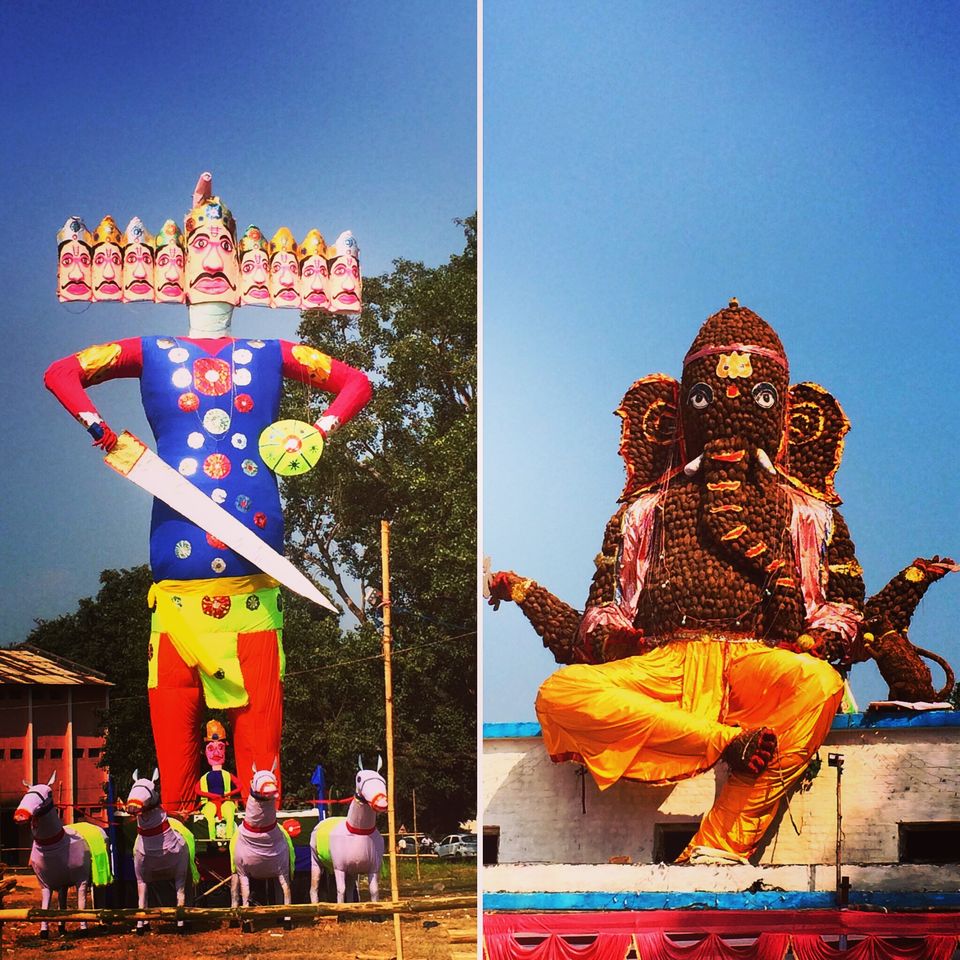 The month of October ushered the season of festivities and grand Pujo celebrations in West Bengal again. Around this time of the year, when it is the occasion to worship the great Goddess and seek her blessings at numerous and illuminated and pompously decorated Pandals and exchange of Vijaya Greetings for the rest of the folks; for me, it is that time of the year when I get 2 working days as holidays from my otherwise maddening busy schedule. Just taking 03 days of leave you get to enjoy 09 Days of holidays. Imagine the kind of blessing it is for working professionals such as me.
The holiday season stirred the rider in me and soon I was looking at places where I could ride to, for some peaceful time away from Kolkata. Alas! After completing Sikkim & Bhutan from Kolkata there was nothing much left around Kolkata to explore. When all the usual options were struck off, that’s when the idea popped: why not try something not-so-conventional....why only hills or the famous riding routes. Why not create an itinerary of the road less taken!

Hence the ride of 04 Capitals in 04 days was chalked out.

What was most important in this unique idea was I could meet all my family members & friends along the way and make them a part of my riding experience. So when I shared the idea with my sister who stays at Raipur she was ecstatic and so were my friends at Ranchi where I had done a short stint of 08 months during launching Bigbazaar in year 2008. The news spread across to all my family members like wildfire. It was, afterall, the first time that my parents and most of my siblings were getting to know about my ride plan and wanted to hear more about it.
While planning I decided to ride in such a way that I don’t end up repeating a route on my ride. So the route was decided.

Since this ride was something my family members were really excited about, everyone would call me to know what my route plans are...which road I am taking...what am I carrying...when will I start...and when will I reach one destination.
The first memorable call came from my Bhabi... Here’s how it went!

Bhabi: So how are you feeling....excited?
Me: Kinda yes.
Bhabi: Arre… I thought you should be really happy by now.
Me: I only feel it when I hit the Tar....so till that time...it’s like any other day...or any other planning.
Bhabi: Best of Luck.

October 17, 2015
Day 1: Kolkata to Ranchi:
So I saddled up my Zeus ....and hit the road for my stop Durgapur. I took a small break for snacks at Shaktigarh.
(Shaktigarh-->don’t forget the famous Lancha Sweets and Kachori Sabzi)
Durgapur is like any other Industrial Town with chimneys asking you to move on till you find some peace ahead. And that’s when you leave for Bankura through a loooong barrage. Bankura is a small town near Dwarkeswar River. Riding ahead through small villages which were getting ready for the upcoming Durga Puja, I reached the big Town Purulia...and from there I hit the highways and entered Jharkhand near Kokarna, crossing the Subarnarekha River. High points were: Stopping in a small village for breakfast...and lunch at a dhaba just before Kokarna and taking quick nap of 30mins.

There were many off the route explorations that happened...like an old Jain Temple before Purulia, where the milestone was "Jain Temple-5kms"...but it was nowhere visible till I crossed 10kms. And the temple was one abandoned place. Hence I decided not to go for any such misguiding tourist places without confirming from locals. The next off the route ride of 60 kms was to Hundru Falls. A picturesque place with a water fall of 322ft; one of the highest in Jharkhand. You have to take the painful climb of 762 stairs down to get the full view of the fall....but trust me! It’s worth the efforts.
Reaching Ranchi was delayed by an hour due to increasing traffic of Puja Pandal hoppers at the outskirts of Ranchi. The traffic in town proved to be more tiring than the entire ride, but the evening outing with some old & new friends was refreshing and watching "How to Train your Dragon-2" on a laptop with a friend was reposing.

October 18, 2015
Day 2: Ranchi to Raipur:
After the evening get together at Ranchi and a night stopover at my friends place I got up at 6am with the religious songs of Jai Mata di. I quickly got done with the freshening-up and started my longest ride of the trip.It was a ride of more than 620 kms. The road to Gumla which was close to 100 kms from Ranchi was a welcome start. And at Gumla I came across tribal folks all dressed up in Bright Yellow Sari and carrying a bouquet of Rice Paddy crops. A quick enquiry got me to know that it was the celebrations of KARMA at the nearest church. It’s to celebrate the new Harvesting season. People were dancing to the local folk songs and the atmosphere was all charged up with few traditional & modern musical instruments being played in absolute sync.

After Gumla I took NH-78 and entered Chhattisgarh after Rupsera Town crossing "Sankha River". Then comes the stark difference on roads between Jharkhand and Chattisgarh. Roads started getting bad. To think of it now...it was more of a ride on less roads and more on damages. So there will be patch of 20-30 kms good road followed by another 40 kms of moderately good road....followed by 5-10kms of bad roads. And it continued like this till Gharghoda. From Gharghoda there are two routes to reach Raipur. One route which goes through Hati —Urga - Bilaspur - Raipur. But the locals suggested that I take the route Via Raigarh, so I followed the same. Roads were full of trucks carrying coal from the 5-6 big coal mines. And the tragedy didn’t seem to end even after reaching Raigarh. The roads from Raigarh to Saraipali, a stretch of 100kms was under repair and it drained all the energy I had. But what can stop a rider on mission??

From Saraipali, the roads were much better and the quadrangle road (NH-6) was getting ready. Apart from few patches it was an easy ride of 80kms per hour. Since it was all dark and roads were not marked properly I rode steady and reached Raipur at 9pm.
It was real test for me to ride more than 620kms in a day...without much of exploration...it was just pure riders’ Ride. It was a surprise to my 15yr old Nephew to see me on bike at his place. And the biggest surprise he got was to ride with me from Raipur to Bhubaneswar. His maiden ride on bike. Something he always dreamt of. So more than my ride it was his ride now on... :) And it made me sleep at peace because I knew that the next day's ride is dedicated to test someone else's endurance.

October 19, 2015
Day 3: Raipur to Bhubaneswar
It was morning 5 a.m. when I woke up and got ready to ride along with my pillion-rider. We hit the highways in flat 15 mins and ride to Saraipali was smoother than the previous day because of the morning light. We covered 160kms in 2 hours straight. We rewarded ourselves with awesome AlooParatha, Gobi Paratha and perfectly curdled Curd. Then we got to Odisha Border through Luhurachati Border and entred Sohela. The roads started getting better thanks to VajpayeeJee's dream project; and after taking small bio breaks we reached Burla. We followed an out-of-the-blue idea of taking a small detour to see Independent India's Longest Dam "Hirakud Dam" which is 25.8 Kms long. It was a proud moment for my nephew to witness such a milestone on his ride.

The next stopover was for lunch and I wanted him to explore the delicacies of Odiya Cuisine. So we stooped at the most famous JituDhaba. There, after knowing our ride the waiter made us park our bike at the Backyard of his Dhaba and made us really comfortable. Then came the Jungle Delicacy "Leaf Burnt Chicken" and "Bamboo Burnt Mutton". And it was so awesome that we finished 3/4th of the meal which is ideal for 5 people. Without wasting further time we glided through Bamur Jungle Range of Sambalpur to Anugul. And kept riding till we reached Odapada where we halted for snacks. I knew it was getting dark and it was time for trucks to hit the roads. And that’s what exactly happened; we ended up riding 90 kms on that two-way road with no marks on roads or on speed-breakers...people driving on high beams...crazy traffic of Highway villages.
Finally we reached Bhubaneswar at 7:30 pm. It was time to unload all the bags and give Zeus some long rest. It was the almost the same distance that I covered in Day-2 but since the roads were good I hardly had any regrets.
It was time to spend the rest of days of Vacation with Family...friends and enjoying home cooked delicacies.

Bhubaneswar to Kolkata:
It was, at last, time to ride from one home to the other; from the place where I get pampered to the place where I like pampering people. But no ride is complete without its hiccups. The ride started as early as 7a.m. in the morning...taking the blessing of my parents just before the ride was my first too. The roads were any cruisers dream road. NH-5 with 6 lanes....good bridges & bypass to avoid city traffic. What more can you as for when you are ending your ride! It was one of the most comfortable rides till Balasore. I was some 20 kms from Balasore and I realised my engine has started heating up with red Signal showing continuously on my ignition. I entered Balasore and was lucky to have found Bullet Dada...

One Bengoli 56yrs old Mechanic. The moment he looked at the bike...like a professional doctor he switched the ignition and found what all problems my Zeus had. Engine oil had dried due to a fault in Valve Oil Seal & Piston ring had to be changed. And the silencer ring had burnt. So he changed the Engine oil. Imagine! From 3 ltr of engine oil I was left with only 250ml. I was lucky that my engine didn’t seize.The rear shock absorber had problem because off excessive driving on bad roads. All these got repaired in 2.5 hours and I was on the roads again.
Entered the City of Joy at 7.30....I could see people taking Maa Durga Idols for immersion in Ganges. And the sound of Dhak and Bell was like the city of was welcoming me back into its warm bosom.

Expenses vs. Experience--:
Road trip accommodation: Rs.2500
Food while on Road: Rs. 5000
Petrol for riding: Rs. 5500&Bike Repair: Rs.6000
The ride was full of firsts. First time that I rode along a family member, first time that I had the good fortune of being blessed by my Parents before a ride ....but all this was nothing compared to

The best moment of the ride!
When you reach home at 10:45pm and are getting ready for an early morning ride, your father tries to find a bolt which was missing from the bike. After 15 mins of effort he fixes it on your bike so you have a comfortable ride is PRICELESS!