An Escape Through Travel

An escape through travel

An escape through travel worked.
Almost from the moment we boarded our bus,
By the time the bus hit the mountains,
we've forgotten the lands even existed.
Gradually the magic of the mountains settled all over us,
as gently and clingingly as pollen.
Each day had a tranquillity, a timelessness, about it,
and we wished it would never have ended.
But then the dark skin of night would peel off,
wishing there would be fresh days waiting for us.

On the benignant evening of September 09, 2016 i left for a beautiful place called Kanatal with a group of around 60-70 completely unknown people (who later become friends :p).

I chose to go all alone on this trip, you can guess the reason... yess, a greed for 'an escape' from the wearisome and monotonous life. After talking to few of my co-travelers at the boarding point, i found that i am not the only one looking for 'an escape'.

After been introduced to these wonderful peripatetic and few chit-chats, we started our journey. We hit the mountains at around 5:00 AM on Saturday, September 10, 2016. As the bus started ascending, i got completely lost in the magnificence of mountains.

The weather uphill was tottering.

Kanatal is a small village situated in the state of Uttrakhand at an average elevation of 2950 ft. This place is not very much infested with tourists and is calm and unexplored.

We reached at our destination The Himalayan Roots in Kanatal at around 9:00 AM. We were welcomed with a welcome drink and then were allotted bamboo cottages.  Living in these bamboo cottages was another delectation.

I was lured by the pleasing environs, the salubrious weather and quietude of Kanatal. I wonder mother nature has bestowed innumerable gifts to us.

The organizers has also organized some activities like bridge crossing, zipline, rope walk, etc. which acted as an add-on to the trip. We did these activities in fog, on the mountains and that was much fun and adventure (untill you fell off :p)

In the evening, we went to the fest organized by the organizers.

As i was lured by the eclat of mountains, i found it unfaithful, if i get distracted by any embellishment, other than that of mountains. And i parted away from the fest, wishing my friends to enjoy at fullest. 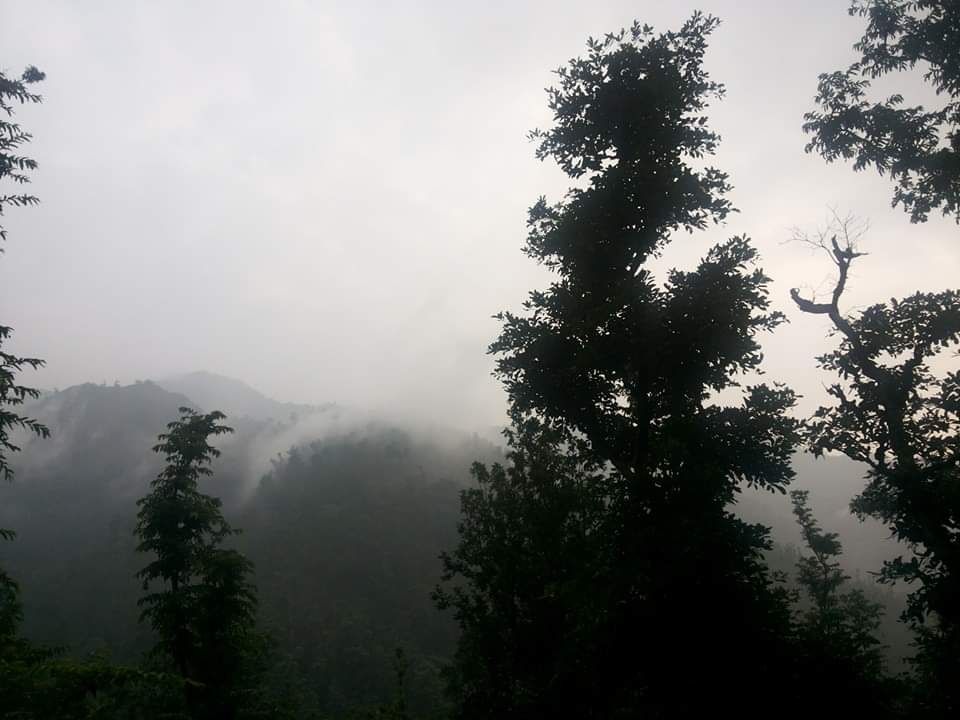