Coonoor: That little slice of paradise 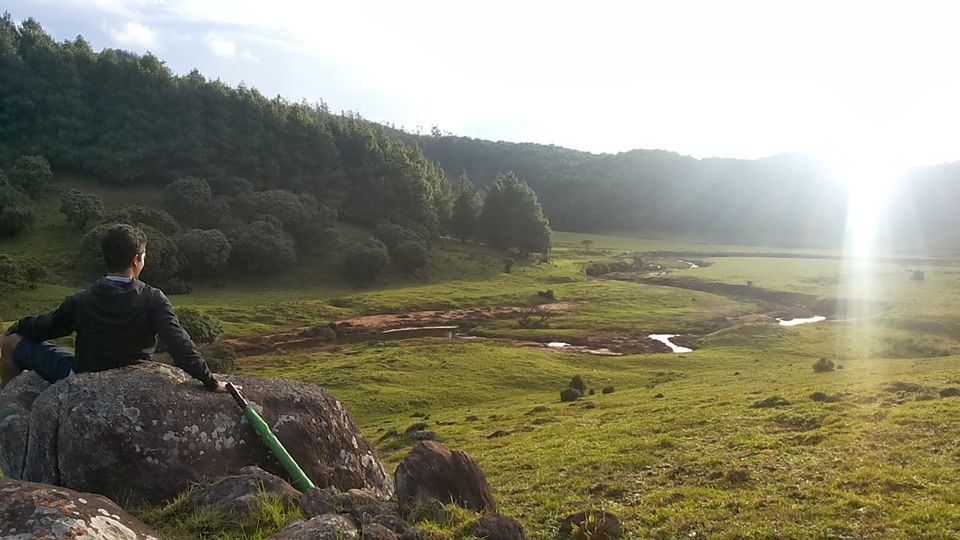 Zooming in as far as my camera phone would allow, I pressed down to capture the scene. The click shattered the silence, in unison the wild buffalo snapped their heads towards me, eyes full of confusion.

Of course I wasn’t the dreaded majestic tiger that roamed the Nilgiris, or the cunning panther that stalked them in the underbrush. I was a stupid weak human who would shit bricks if they took three steps towards me. The big male at the head of the herd looked at me threateningly. I wanted to somehow melt into the wet grass under my feet.

Dorai was unflustered. He stood with his hands behind his back, his lungi loosely knotted to allow the chilly air to whip around his sinewy calves and looked at the scene before him. If the short elderly guide was laughing in his head, his face did not show it. Perhaps this had happened before.

We quietly moved on, me hoping we could get as far away from the herd as possible. The big male watched us until we were out of sight. At that moment, I felt adventurous, even a little brave for facing off a herd of two dozen buffalo like that. In truth, there was nothing brave or adventurous about it. I wasn’t chased by bison, startled by a leopard, harassed by a band of rambunctious monkeys or even attacked by a swallow and lived to tell the tale.

I was simply getting a lesson, just the basics, in being one with the wild.

It was my first time staying in a national park, hopefully not the last. Parsons Valley is part of a cluster of valleys, reservoirs, and wildlife sanctuaries that make up the Nilgiris. Spanning 2,479 square kilometres, the Nilgiri Hills are huddled in the westernmost part of Tamil Nadu, near the borders of Karnataka and Kerala in south India.

They are home to a wide range of flora and fauna, including large pockets of eucalyptus trees that give them the name ‘Nilgiris’ or ‘The Blue Hills’, and the largest concentration of tigers in the wild. Sambar deer are much larger in real life than one would have thought, even at 200 metres away. And they are very nervous. Flinch, and they scamper off to hide.
Rows upon rows of pine trees seemed to have the only man-made affectation. The government could have planted them randomly to give the hill-side a natural effect, but this is just nitpicking.

Here the grass gave way to a soft carpet of dead pine needles. On my left, a few foxes ran up the hill and then paused to observe us. We ducked under a low branch to enter an archway of sorts made by another species of tree.

The path was obviously used, but there was no one in sight. How in the world did a wild cat pick its way through the twigs without snapping one? Here I was announcing my arrival to all and sundry with an orchestra at every step. I gave up trying and hurried along, keeping my eyes on Dorai. He had a peculiar sense of fashion – white lungi and white shirt, a suit coat (yes, you heard me right) and gumboots. Every so often he would unhitch the second knot of his lungi and retie it to maintain the knee-length that is so common with working south Indian men.

A panther had made a kill only a couple of days ago, he said. Perhaps the carcass was still there. It was close by. Images of Animal Planet flashed by – the stench, buzzing bluebottles and swarming flies, coagulated blood. I sniffed the air, bracing myself for the onslaught. Nothing.

Dorai pointed but I couldn’t see a thing. Suddenly we were almost standing on top of it. I had never felt so stupid before, having watched endless hours of television shows on the subject. I could make out the spine, but that’s something a baby would do. There was a mass I thought could have been the head, and some stringy stuff that was presumably a few entrails left behind.

The panther had done a fair job of cleaning up. You could smell the carcass, now that you were so close, but the rain had probably subdued it. The cat could have still been in the vicinity – the pickings of wild boar, sambar, buffalo and rabbits seemed great.

We climbed up an embankment and suddenly it looked like one of the views I had travelled from Goa to see. It didn’t look like the pictures, simply because the image online was of Avalanche Lake and I was on the banks of the Mukurthi reservoir. But it was breathtaking all the same.

I zipped up my jacket against the chilly wind and we sat there, soaking in silence and the greenery. Not a honk, not a wail, not even the tinkle of a cow’s bell. This was perfect.

How I got there:
From Goa to Coonoor: Via bus (KSRTC) from Goa to Mysore to Ooty and a local to Coonoor
From Coonoor to Parsons Valley: Four-wheel drive (they send you one if required at extra cost)

Where I stayed:
Parsons Valley Retreat (Rs 1800 per person per night including breakfast, lunch, tea + snacks, dinner). They made a bonfire and put some logs in the cabin so we wouldn’t freeze to death.

What I ate:
In Parsons Valley: delicious array of south Indian food
In Ooty: Chocolates from Modern Stores