The Rann of Kutch! 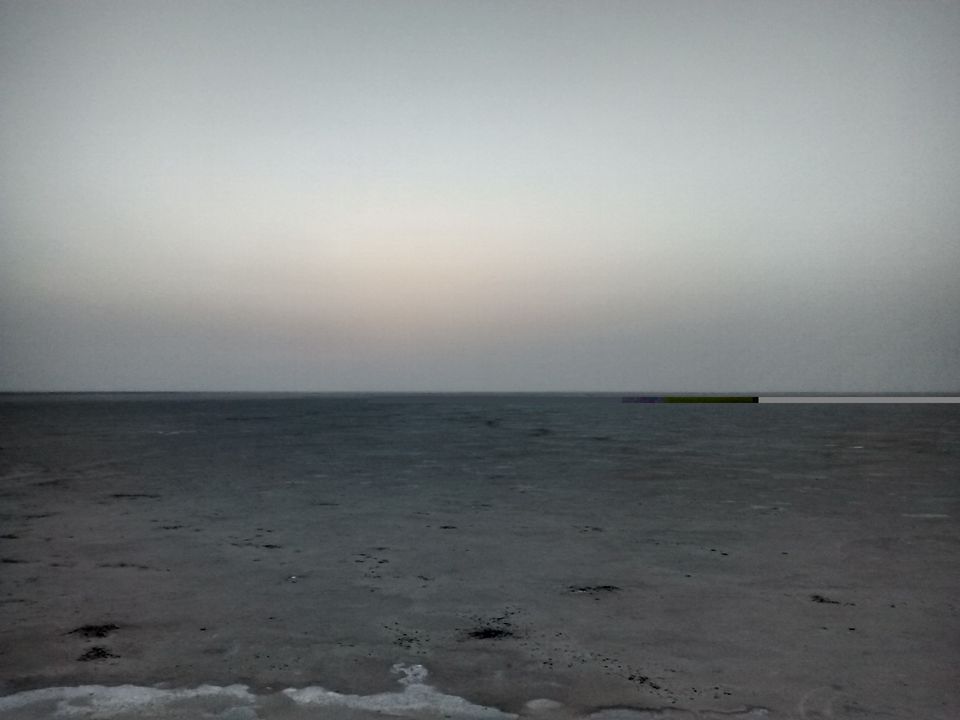 Finally!!! After longest planning of 4 years, finally I landed up in “Rann” The journey began post Holi (RangPanchmi – 24th March afternoon) by the most comfortable mode of Transport (Railway).

Yes it was 24th March & I was warned by each & everyone who knew I was taking risk of travelling to Rann in March ending. The temperature is supposed to shift its gear & go above 40 degrees. And I was there with no precautions (whatsoever)... No Full sleeves T-shirts, No Denims, No Sunscreen lotions & blah blah blah... I was in my most comfortable clothes – Shorts Tees & Glares!!

It was 7:00 am & we were at BHUJ” Station before time by 20 mins. Travelling by “Toofan” (14 seater car by Force Motors) was fantastic experience to reach Nagalpur @ my Friend’s Home (native). Though it was One & half hour journey (60 kms) but it was super fun. The lonely roads, no traffic, no signal nothing... We had lot of discussion in train whether to directly hit Rann of Kutch or go to Nagalpur (a small village in Mandvi) & explore Mandvi. And Finally with lot of if’s & but’s we unanimously decided to explore Mandvi first.

The exploration began with having one of the best & cheapest (Rs. 5 for Full) Tea by a roadside vendor (commonly known as tapir). Obviously one glass was not enough to give a kick, so we had 2 rounds of Tea. As it’s a small village, there were no Restaurants. So we decided to taste simple Guajarati Thali @ Bhoojnalay. The decision proved right to taste simple food as it was its best!!

After Lunch we started our Journey to explore Mandvi by hiring a Tam-Tam (Auto) of ‘Bitto Cha-cha’ for Full day. I had the list of places to visit (obviously got from Internet). There were around 10 places to visit.

It’s hard to believe as the watch was showing time 2:30 & still the weather was so pleasant. That was the best Moment for me as I am a Beach bum. I thanked our Auto rider (Bitto Cha-cha) as this was not part of our - To-do-List.’

Though it was a beach, it didn’t give me satisfaction. It was super crowded considering Friday evening. There was some meeting / forum (‘Strisamelan’ as we used to call in our college days :-P) was going on in between the Beach of 100+ women’s & to make it more worse I got a call from one of prospective customer who was suppose to give Order of worth Rs. 25 lacs. I was in no mood to discuss Business on Beach (not even in my wildest dreams) but can’t help it; I had to oblige by answering the call as Finally it was customer & ‘Customer is always King’ for Salesmen. {Actually no Salesmen would dare to go on vacation during March end, but I have the balls to do it & I think I took the right decision to take the benefit of long (Holiday) weekend :-P }

Let me come to the Beach, yeah  the Beach was overcrowded & the Windmills were not working which added more fire to piss me off.

It takes 2 years of sweat, hardships & pain to build one ‘SHIP’ which costs in 2-3 cr & still are in demand even in this generation. Most of these Ships are exported to Dubai.

That’s how our long day was ended & waiting for the most adventurous day to come, the place where I was only thinking to go from last 4 years.....

After the long discussions finally we decided to visit “Rann of Kutch” on 2 wheeler. It was 140 kms one way from Nagalpur to Rann & another 70 kms (return) was a place called KALA Dongar (Black mountain).

It was one of the best experience & right decision to skip cab & ride all the way. It took more time than expected as the route was unknown & you will hardly find someone on the road whom you can ask the route... Actually the route was pretty simple but still we wanted to double check we are on the right track.

As ridding to Rann was not in the plan, we didn’t have any gears to ride almost 300 kms a day, but still we managed with whatever we could use to cover our Face.

Shockingly not even once we felt like we are riding in Gujrat in March end, the weather was so pleasant... It seems we were luck...

The first landmark in our ride – ‘TROPIC OF CANCER’

It seems Gujarat Government is in the process of making money from Tourism. You have to pay Entry fee to visit Rann of Kutch. Thought the Rann Festival was over long back but the authorities still wanted to make money.... Strange...

After doing formalities of Toll we decided to have a break & grab some tea & have some bite. We visited one kind of Dhaba but Food was not served there (only tea & snack). We found local guys playing carom there & what we witnessed was “Unreal Engineering”. To make their carom board smooth they have put customised acrylic sheet to fit the carom. No need of powder or lamp to make your carom smooth.

Also got the chance to ride “Diesel Engine BULLET”

In the end you will enjoy what is there to witness. You get the cohesive view of complete Black Mountains, India Bridge (Indo-Pak border) & dry river of Rann of Kutch (which gets filled during monsoons).

From this location you will be in doubt & ask whether it is sand or water – “Beach or Dessert” (Sab mirage hai... Hoti ret hai, lagta paani. )