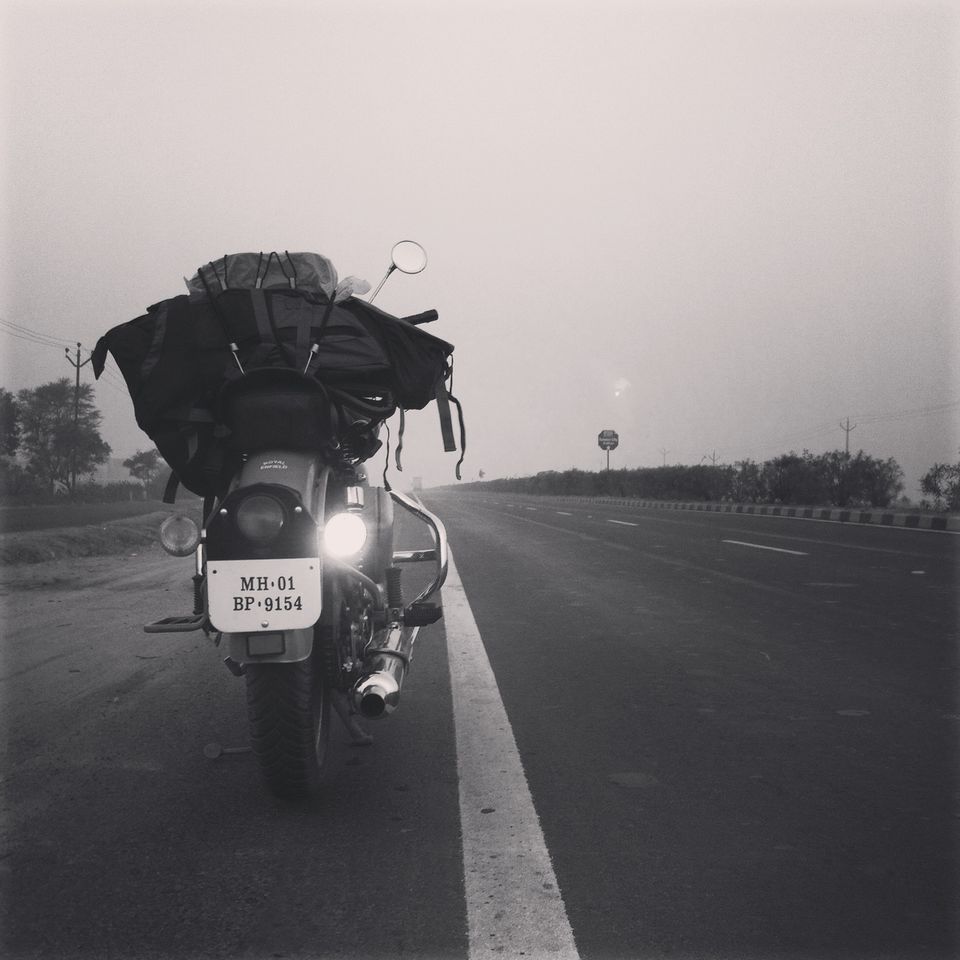 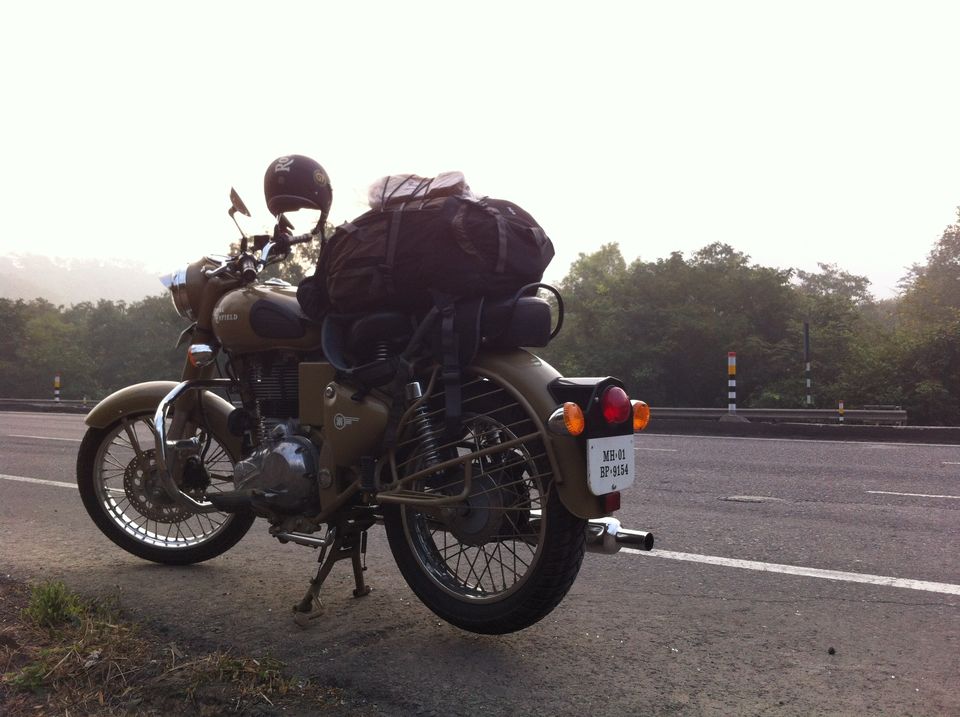 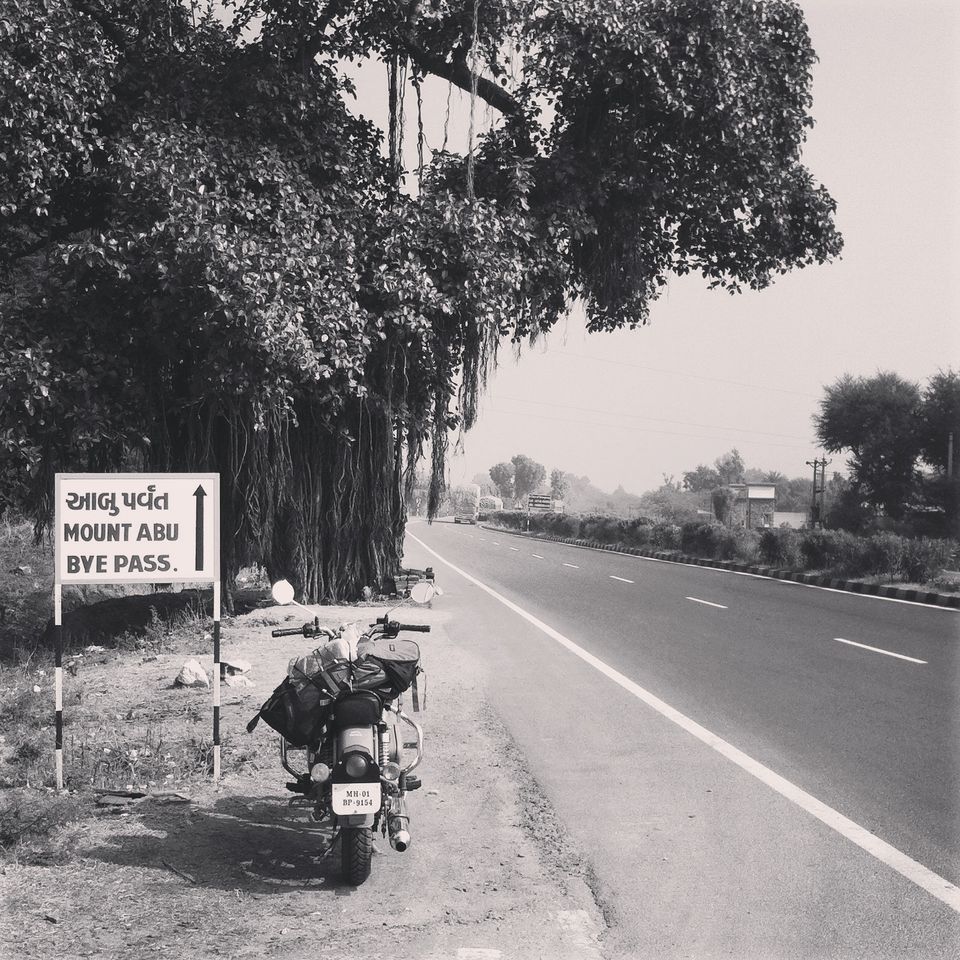 As US president Barack Obama got ready to reach India Gate in New Delhi as the chief guest on the occasion of India’s 66th Republic day, my motorcycle was racing towards Delhi on NH14 leaving Gandhi Nagar, Gujarat. This was my first rendezvous with the chill of a winter morning of West-North India after four years and 21 days.  It was an experience as invigorating and awesome as watching the MIGs fly just over your head during the Republic day parade.

The chill in the air pierced through three layers of clothing causing pain in my chest – pain that was compensated by an amazing view of a lonely highway clouded by fog. I had to stop to pull out a warm inner from my rucksack tied to the pillion seat. I quickly wore it and wrapped a woolen muffler to shield myself from piercing cold. A car zoomed past me and the passengers were quite amused to see a man changing clothes besides the national highway on a foggy winter morning. The cattle rearing next to me did not care a bit. I prayed to the sun god to show some mercy and shine away the painful cold as I kick-started my bike again and moved ahead slowly.

This was the second day of my road trip from Mumbai to Delhi on my Royal Enfield Classic 500. Mumbai to Delhi is over 1400 kilometres and the intent was to close the gap within three days – not bad for a rookie biker. The first day of exit ride from Mumbai was beautiful and made me cringe a little on the thought of leaving the city forever as I shifted my base to the national capital of the country.

The national highway leaving Mumbai offers a smooth ride minus the short breaks one needs to straighten the back and get some blood flow in the rear. While travelling solo by a motorcycle across Indian states, you can smell the difference. Every state has its own characteristics; it also has its own aroma, sometimes stench. If you do not understand this, travel via Unjha – a town in Mehsana district of the Indian state of Gujarat also referred to as the spices capital of India. Get out from a flight just landed in Mumbai, travel via local transport in almost any part of the country, venture out at night when there is less smoke on the streets and you can differentiate a city by its aroma.

There is a park as well with an option to savour food at a local dhaba as you see one. A Kathyawadi thali at a roadside dhaba at Bharuch in Gujarat by the name of ‘Nyay Mandir’, made it crystal clear that Gujjus either eat sweet food or way too spicy, nothing in between.

Road congestions are customary in India as well, whether it is a narrow street, a traffic signal, a 16 wheeler break-down, an accident or just cattle standing in the middle of the six lane national highway, spotting steel of different shapes and sizes standing bumper to bumper with their drivers honking aimlessly is a common sight. The romance between me and my motorcycle touched new heights as we bypassed over 2 km long traffic jam through the narrow dusty terrain alongside the national highway, while every onlooker on more than two wheels gazed helplessly. The cotton buff played a lead actor’s role in keeping the dust make-up off my face. As I closed in on Ahmedabad, the sunlight was replaced by street lights and I zoomed past the famous Gandhi ashram to my right in a hurry to find a place to sleep at the night.

While checking into the hotel “Decent” at a Gujju locality, it was evident that the venue was a heavenly copulating abode for the young souls as each room was occupied by couples mostly under the marriageable age. Wondering if there will be a police raid at night, I checked into my room and requested the attendant to fix me a couple of drinks in the dry state of India.  Advocating the need for my pain killer to the attendant, I was obviously ready to pay few extra bucks to fulfil my desire. He could not be happier and I slept through the night like a baby.

The Gujarat state highway 41 that leads to Jaipur from Gandhi Nagar, Gujarat via Mehsana and Abu road is amazing and completely merits the pain of sitting on a bike throughout the day. Each view is replaced by prettier scenery which made the photographer in me desiring to stop and click pictures everywhere. But the biker in me was on a mission and could not give in. I only stopped at the Mount Abu bye pass on the Abu road and went nostalgic about a childhood picnic and faint memory of the hill station over 2 decades old. Mount Abu is a beautiful hill station in the Aravalli Range in Sirohi district of Rajasthan state in western India, near the border with Gujarat. No, I could not go there, had over 500 kilometers to cover before it was dark.

Whatever is said about the road less taken, one must never stop taking chances and after all, that’s what life is about. I did so and was awarded with a solitary ride and awe-inspiring views of national highway 14. I had it all for me and it did not let the smile leave my face even for a second.  I fell for the beauty of road trips in India, especially on a motorcycle.

Soon the perils of road less taken dawned on me, the blinking light on my speedometer drew my attention towards an urgent refueling.  Then began the toughest half an hour of my journey where I believed it will be physically impossible dragging the 200 kg weighing piece of Iron if petrol pump did not surface soon enough. That was also when I realized that contrary to the gas stations in the advanced nations, which offer everything for the road, Indian fuel station are specialized – diesel only, petrol and diesel, CNG (Compressed Natural Gas) only and then those which accept cards or only cash or both and so on and so forth. I have to thank my luck as after what looked like eternity, surfaced a fuel pump bringing back the smile.

The pink city, Jaipur greeted me somewhere around 10 pm and the ride through the lanes of Jaipur refreshed me completely. My friend suggested that I should spend the night at Hotel “Paradise”. Decent, paradise, they are all the same, I thought and dialed the manager to check if there was any room available for the night. The manager obliged and offered a discount as well. I was in for a shock as I walked into the property; the entry into the room was enough to make you believe that you entered into a five star at 1/5th the tariff. After a shower, it was time to update my near and dear ones that I had survived the second day’s ride as well.

I woke up to a beautiful view from the seventh floor of hotel paradise and was fascinated to see a bit of the city. Jaipur to Delhi is not more that 270 kms i.e. not more than a 4-5 hours drive. Deciding to take it a little slow, I walked around the city in the morning and then treated myself to a great breakfast which was covered under room tariff.

Enroute NH8 towards Delhi, a sports bike zipped past me through the traffic. It got me thinking that there is definitely something that separates a Royal Enfield Classic from a sports-bike and men from boys. Fifty meters ahead, the same biker had bumped into a cycle rickshaw and was on ground lying flat on his back. He had enough onlookers to help him and I had a long road to cover. Delhi NCR greeted me with a never ending queue of vehicles and it seemed like they had all come to escort me, just looking in the opposite direction. For my friends and family members on social media, it was time to make the end look interesting and I decided to click a picture of my motorcycle with India Gate as the back ground.

If you are familiar with the abbreviation ‘VIP’ and you know what ‘movement’ means, you have either had a past with Delhi or were probably raised being told (much like AAP convenors) that VIPs are a pain to everybody. Yeah so, there was some VIP on the move which left the main roads blocked and the unimportant ones choked. And hey, remember Obama was here yesterday for the Republic Day parade. It generally takes a few days for the organisers to get the barricades off. Yup, that made reaching India Gate merely impossible. I had to remind myself of the pain I dared while leaving Mumbai, cold I braved on the Gujarat highway, the aches I fought on my back, shoulder, butt and any possible body part alongside other experiences an urban professional is not privy to and decided to make it possible. It probably took me as much time to reach India Gate from Gurgaon as it took to reach Gurgaon from Jaipur, but I finally did manage to find a little road leading me to India Gate and clicked the victory picture with Amar Jawan jyoti in the background.