I can't wait call this the second day as we did the climbing post midnight, so it was technically the same day. Anyway, the trail back was more beautiful, because we could see the lush fields and wildflowers and blue skies, with white fluffy clouds floating across. We stopped the neighbouring mountains and the great lake. It had stopped raining by the time we reached the plain.
We headed into Kasara town, had a robust breakfast of misal pav, dosa and garam chai. We gorged, basically. And then it was time to bid everyone adieu. We said our goodbyes and hopped on the Kasara-CSMT local to go back to our daily mundane lives.

This was my first solo trek. My first ever trek, really. I was pumped. But also a little tense as I wasn't quite sure if I'd be able to make it all the way. Well, we all gotta start something. Atleast I would've had tried, is what I told myself. I got down at Kasara local station, I was early by more than an hour, I made friends with a dog and watched some random YouTube videos to kill time.
When the group arrived, we got into two jeeps that could carry 10 people each and headed towards the base village of Ratanwadi.
After a hearty meal of Maharashtrian thali, the guide told us we could catch two hours of sleep, as it had started to rain.
We started out at 2am. As we left the village behind and walked out onto the vast plainland, I could see the mighty Sahayadris looming up against the sky like a dark, majestic beast. We reached the base of the mountain, our climbing point,I already panting. "Maybe this was a bad decision," I thought to myself. We hadn't even started climbing and here I was huffing and puffing and turning all red. Unfit pro ultra max.

We started out. It was tough. Ratangarh is not an easy trek. It's a medium endurance trek, and I had zero. The company I had kept motivating me throughout. Some people who had been on treks earlier helped me cover the rough patches. I took short breaks in the middle. I would see a tree up front and tell myself that's where I had to go, and I kept doing this over and over again. There were some first time trekkers, who were having some trouble as well, which was some consolation for me. We kind of bundled together, laughing, sharing out troubles and cracking jokes along the way.

But what really motivated me were two girls, who were on their first and second day of period respectively. I wouldn't have dared leave my bed if I was in their place, and here they were, these brave superwomen, trying to climb this hill at midnight whilst bleeding. They couldn't keep up with the group but they hustled on. The second trek guide stayed with them. I was somewhere in the middle of the trail.

We climbed some rocks, really rough patches, where you had to pull up a fellow trekker and use a rope. It hadn't stopped raining this whole time. The weather forecast had not warned me. I was in my tshirt and yoga pants which were soaked. I prayed I wouldn't catch a fever the next day

We made it to the top at around 4:30 am. It was beautiful. But we couldn't see much because of the rain and fog. I could see the millions of tiny yellow flowers, though. They covered our paths and the entire mountain. I think that's where Ratangarh gets its name as the Fort of Jewels. We rested at the ruins of the fort for a while, some clicked pictures, I did too, worried that my phone would die in the rain but wanting to capture this moment of personal victory.

It was a wonderful feeling. I have always been a sick kid right from childhood, always suffering, always on medication for something or the other. This, was a great feat for me. I honestly hadn't thought I'd be able to make it. I thanked this one fellow trekker who had helped me a lot on the way, giving me his bottle too when I ran out of water.

It's true what they say, trekking changes you. It makes you push your physical and mental limits. It gives you a sense of achievement. It makes you humble. You see you are only a tiny part of this world. It makes you aware of your insignificance,  at the same time of your strength. Standing in the rain, shivering in cold, with my soaked shoes and clothes and hair sticking to my face, I'd never felt more free. It was liberating.

There's a ridge at the summit. I stood at the opening. A strong wind blew, almost knocking me off my feet. I spead my arms and took it all in. Ah.

We rested for a while in the cave, drank tea and ate hot steaming maggi prepared by our local guide, Lahu bhaiya and his wife. We tried to fight for a place near the fire to ward off the cold.  We rested for about an hour and then headed down, after expressing our reverence at a small temple on the way.

Climbing down. What a stunning view. 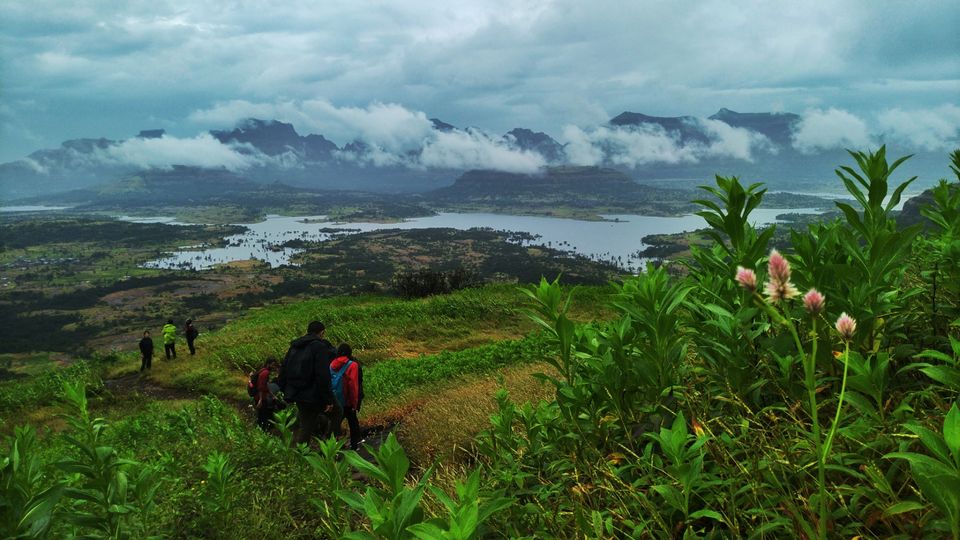 The prettiest wildflowers. Our trail was covered with them. 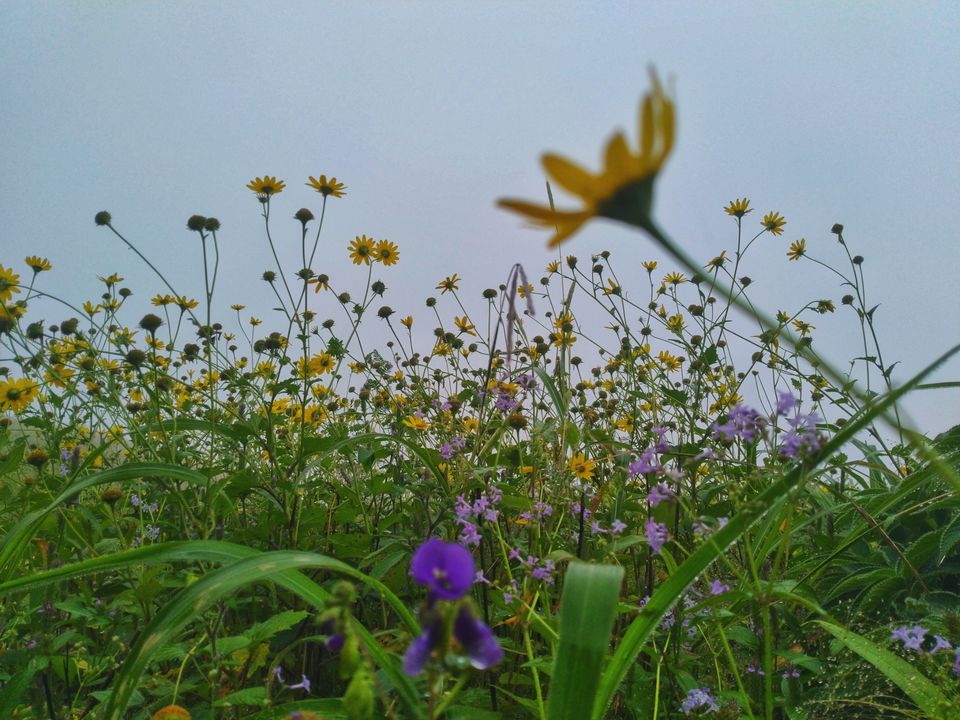 Slippery patches. The rain made it more difficult, but also thrilling. 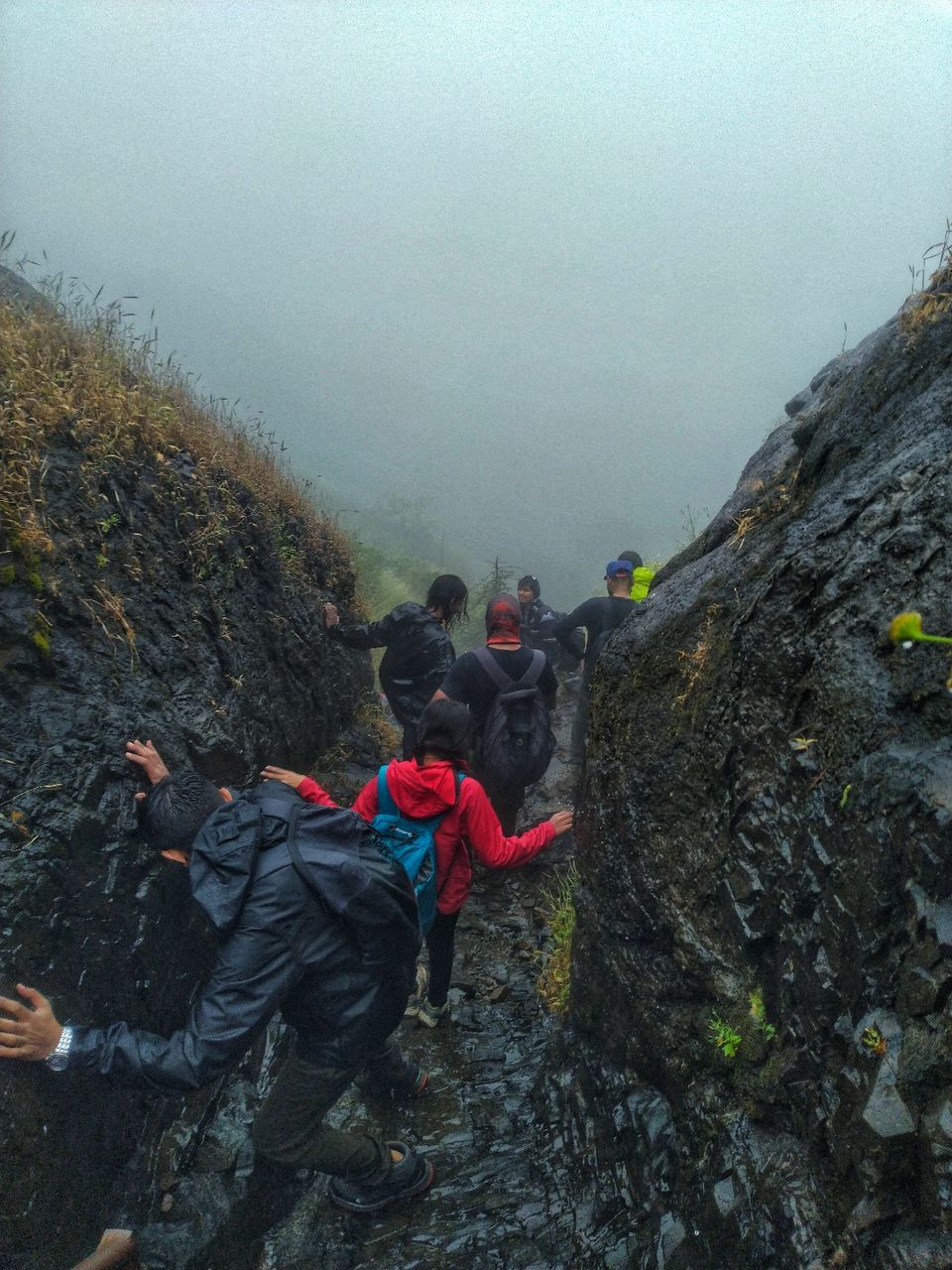