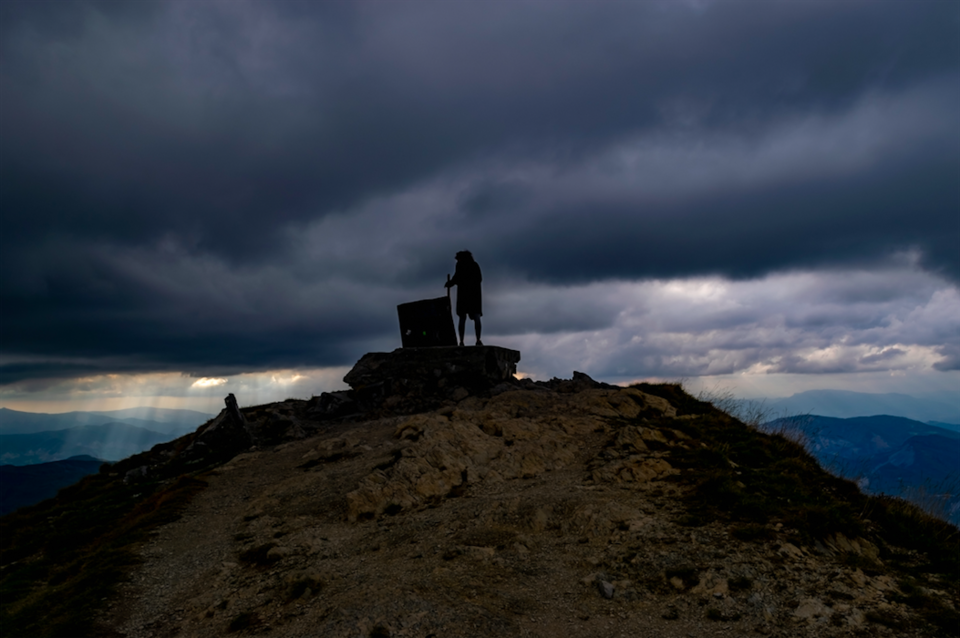 When you live in the mountains, two of the hot topics always discussed with the locals are freak accidents and miracles. This is one such story.

It was a slightly windy day when we decided to climb up to the summit, but nothing worrisome. It was sunny, but cold enough for me to realise that a thin cotton sweater was probably not the most appropriate clothing. We started our hike a little late in the day so while we were on our way up most people were already climbing down, but that didn't bother me because I don't like crowds much. One family told us to hurry up because it was supposed to rain but it wasn’t that cloudy and it wasn’t foreseen on the weather forecast so we thought nothing of it.

It seemed like a fun, though slightly steep hike. It wasn't unsettling until we reached the peak and the dark clouds started rushing in. We were the only people up there, we had no phones and no one knew we had gone hiking. Just before we reached the orientation table at the peak ( which by the way, has been struck in half by lightning!), my friend thought it'd be a good idea to let me know that a woman once came to hike up to this peak and she must have fallen down while descending because no one ever found her again. As you can see in the two pictures, the view from the peak was beautifully sinister and we realised that we needed to rush down. While climbing down, there was a very steep path that we had to cross when it started raining. , it started raining as we were climbing down a very steep path. And guess what? If you look down, you stare right into the dark pits of this valley that I'd like to call death. Things started to get slippery. We might have struggled to cross for about 15 minutes but god, it felt like an eternity. I kept imagining the worst scenarios in my head - me falling down and Remi having to go back alone, Remi falling down and me not being able to find my way back down, both of us falling down and no one ever finding our bodies. You name it and I probably thought it. When that part was over, Remi came and hugged me and assured me that we were both alright. I knew he was quite scared too because he had told me on multiple occasions that rock climbing scared him and the rain was just a cherry on top of the very horrifying cake.

So, when he hugged me I realised I was crying. However, as soon as I pulled myself together, he gave me some very disappointing news - there was no path and we were most certainly lost. Before reading further, I'd like you to know something about me, I'm not a daring or fearless person and I genuinely enjoy hiking, but I do not have a lot of stamina. I usually take my own sweet time to get to the top and it's usually at a leisurely pace because I tire easily. Climbing up to this peak was quite hectic for me and after climbing down for 30 minutes, out of which 15 minutes were straight out of hell, I had to agree to climb right back up. Remi knew exactly what my pace was and usually never rushed me. He was really encouraging this whole time and I made it a point not to say " I can't do this" out loud because I knew that once those words left my mouth I would give up and that wasn't fair to me or Remi. We reached the peak and we started going back down the way we came up. We started rushing. No time for breathers. No time for water breaks.

When we reached the trail of the meadow, we looked up and saw that the clouds had completely swallowed up the top half of the mountain. Precisely when we sighed a breath of relief and thought that we were out of danger, we saw the lightning. In an open meadow. Remi and I looked at each other and started to run for our lives (to this day, this is still a debate between us- he said we were fast walking and I say we were running, that’s only because what was fast walking from him was running for me I guess). I “ran” to the chants of " Allez, Nupur! Allez! Vite vite vite!" which is come on! Faster! Faster! There were moments where I couldn’t keep up and he just held my hand and dragged me along. If you know me even a bit, you know that I never run. NEVER. I never wanted to race with anyone when I was a kid, never ran track and physical training in school meant jack to me. But, when you're trying to escape from the grip of the Grim Reaper, you'd be surprised at the amount of sheer adrenaline that takes over your body. You cannot process thoughts anymore and your muscles react way before the message reaches your brain. We “ran” for a good 20 minutes ( I beat my own personal running record of 10 seconds) before we reached the forest trail. We were finally safe. The hike down from there was pleasant and we just walked down in silence. We got into the car, ate some sandwiches and listened to the radio. It was pouring and the lightning storm and thunder seemed distant and quiet from the safety of our car. I hadn't realised how frightful the day had been until we got home and sat down.

To this day, I blame myself a little for stopping at the orientation table to take pictures despite Remi saying we needed to get moving and for walking at a snail’s pace. Remi still blames himself because we took the wrong path. But in the end, I suppose we’re both just glad be alive.

If you’re still motivated to go on this amazing hike in the French Alps, learn from my mistakes and check the weather forecast ahead of time. I’m certain that you will enjoy walking through the beautiful meadow, climbing up to the peak and marvelling at the orientation table… I’ll always thank my lucky stars that the table was the only thing struck in half by lightning.

If you're a beginner, click on this link for some hiking tips https://gettingontravel.com/tips-for-hiking-the-french-alps/