The royal city of Hyderabad in 3 days 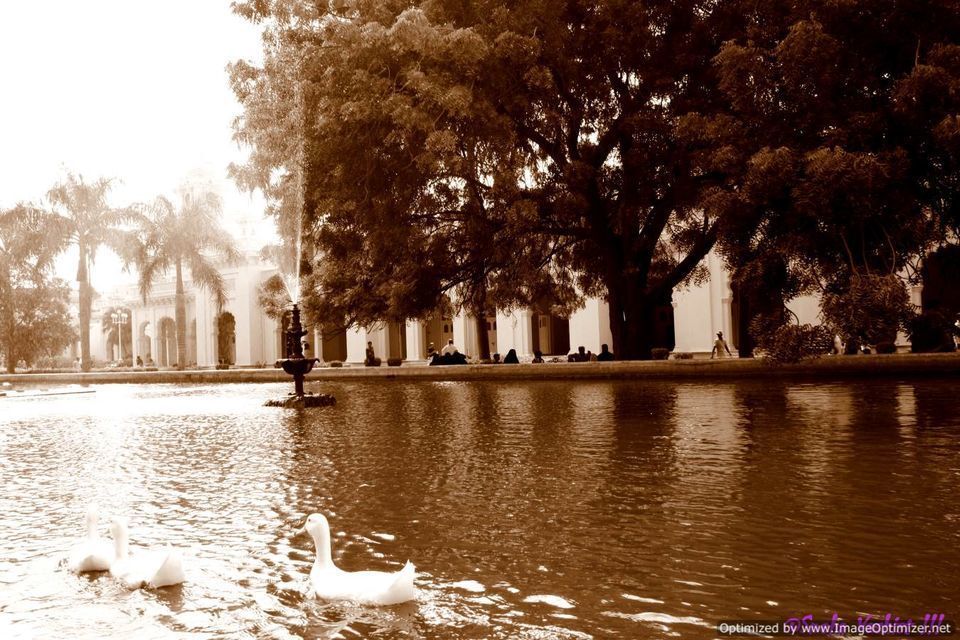 There are times when I wonder...Why does my mind always wander to travel?

Travel to do crazy shopping trips..

Travel to make the unknown known..

Travel to meet someone I haven't seen for long...

Travel not in search of peace but to be surrounded by noise...

Travel for those interesting unplanned conversations with the unacquainted...

Words fall less to describe this kind of love. The eternal one !

The charming city of pearls, Hyderabad, has something about it, something very royal. This city of Nizams and the hub of information technology is one of those places which is crowned with glory for its rich history and splendid culture. And I indeed felt extremely royal with the warm welcome this city offered.

Telugu, the ABCD of this language is unknown to me. What came as a pleasant surprise and gave me laughter attacks as soon as I stepped out of the station and grabbed a rickshaw to head to my friend's house was the gibberish words pumping out loud in the auto. It is very difficult to explain how it feels when everything you read around cannot be read. Unknown language, bizarre words. It's kind of funny to feel alien in your own country just with the change in the geographical zones.

So, the first day in Hyderabad was a bag full of surprises with all the royal fantasies coming true. 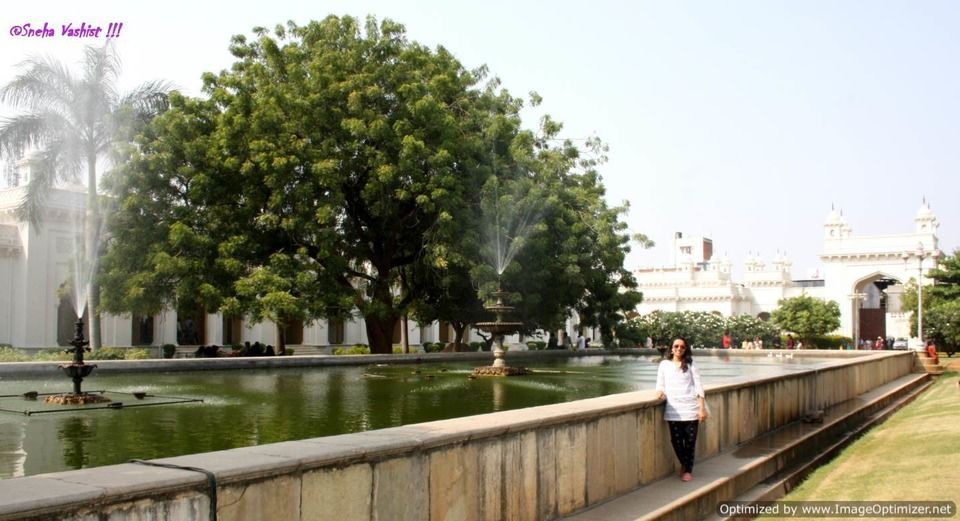 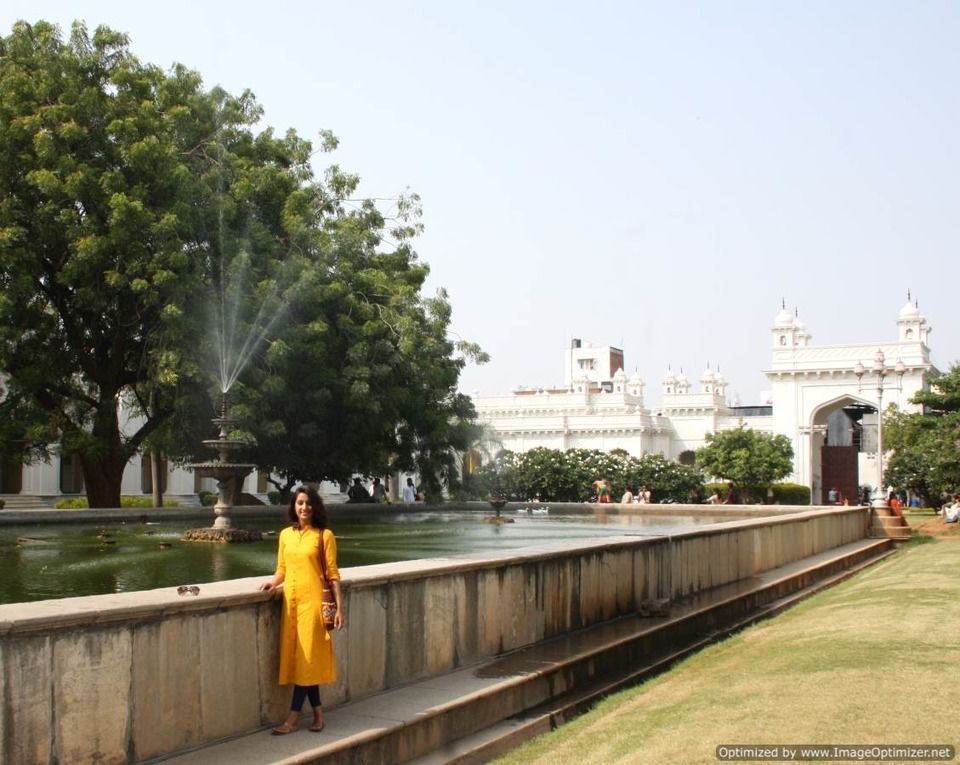 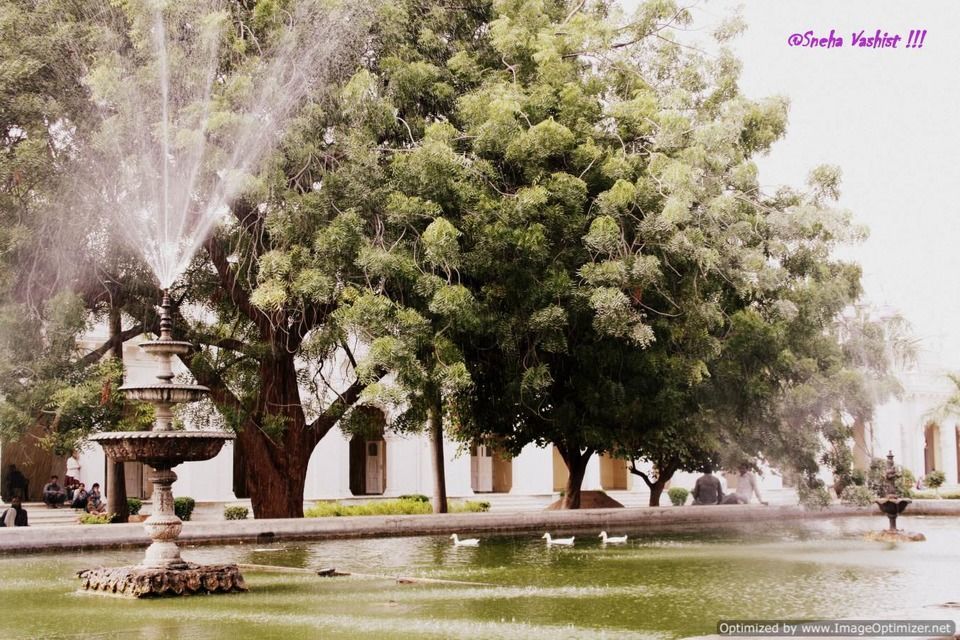 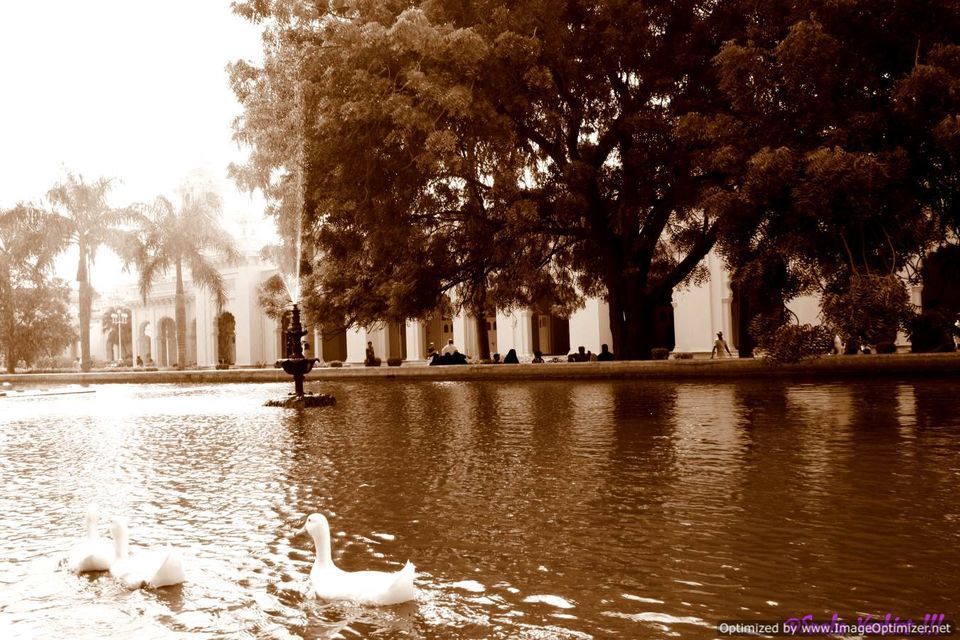 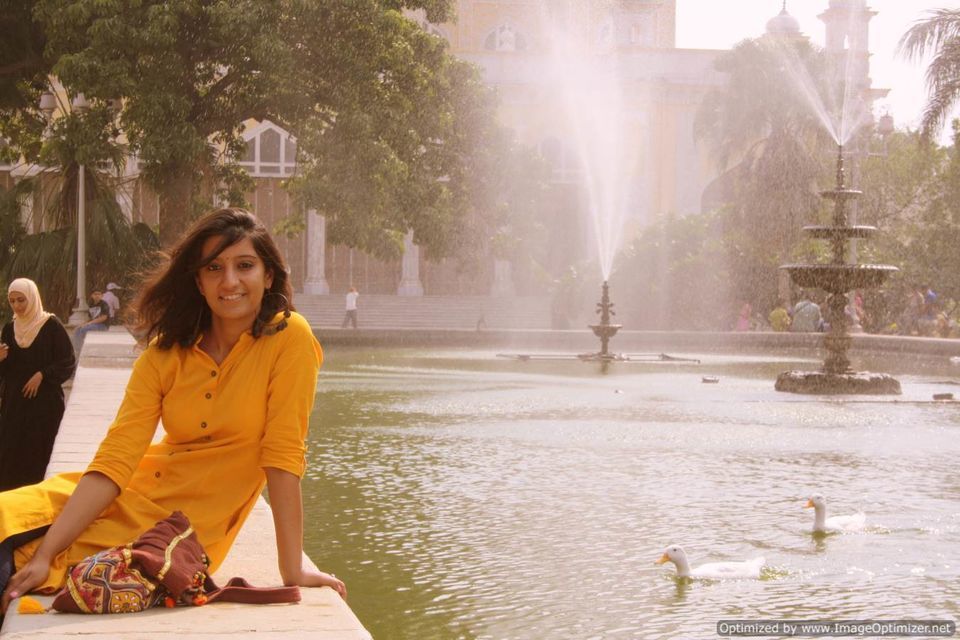 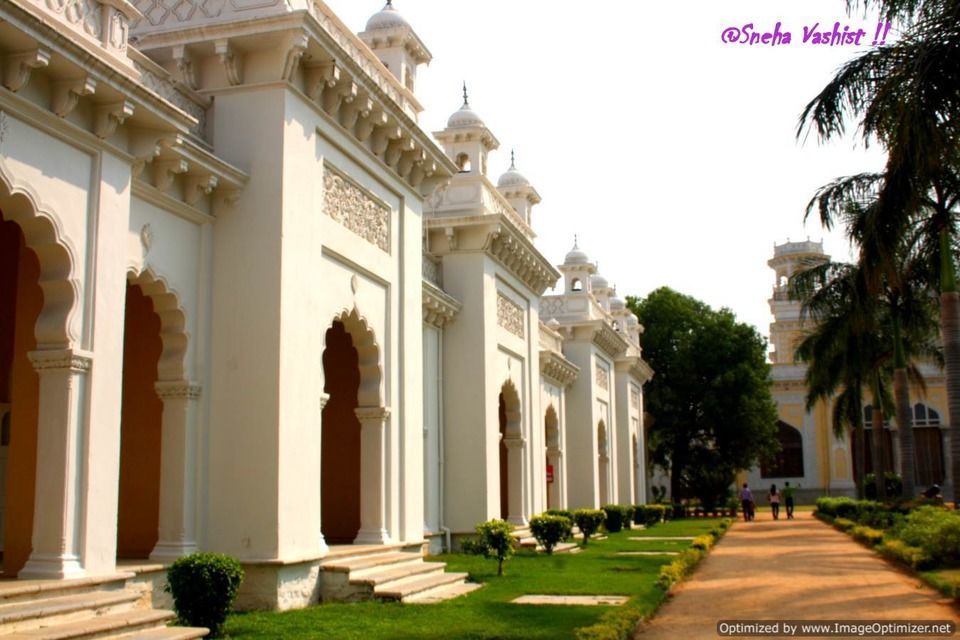 I began my day by visiting Chowmahalla Palace. This palace makes you feel like a queen or maybe it did that to me. The palace has majestic courtyards, lush green gardens, mesmerizing fountains and prestigious collection of vintage cars. This highly maintained palace of Nizams defines what luxurious living would have been! I entered the Khilwat Durbar, the chandelier court of the Nizams and it made my heart skip a beat. Everything around me happened in slow motion for next few minutes. Felt like I was time travelling to a different era. It's difficult to take your eyes off the beauty of this durbar. These chandeliers are only lighted when parties are held there. Believe it or not. This durbar can be hired for parties. Are you planning one lately ? Why not add royalty to it by hiring this place ? Ooops, I meant palace. 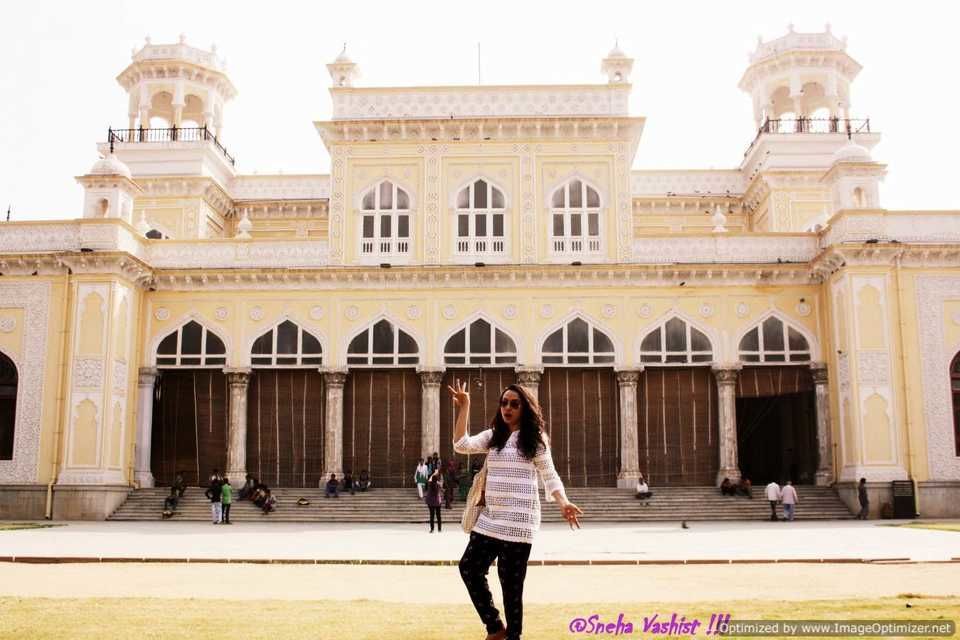 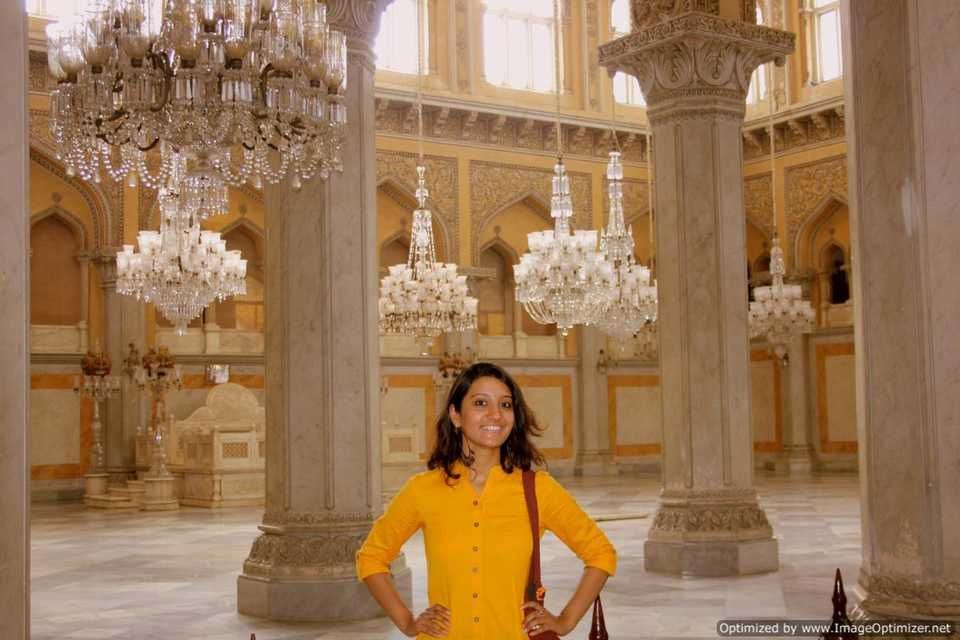 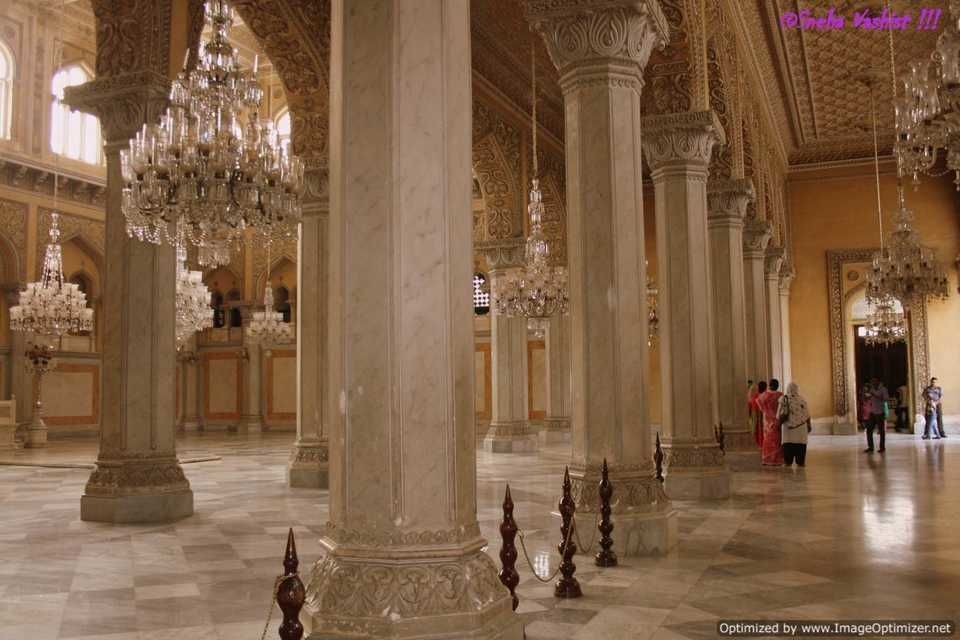 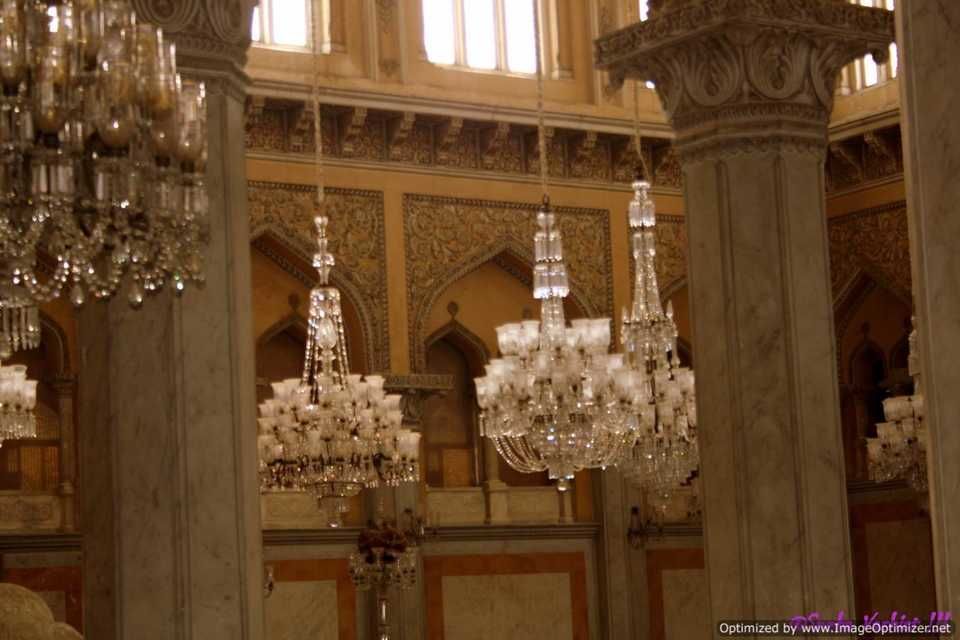 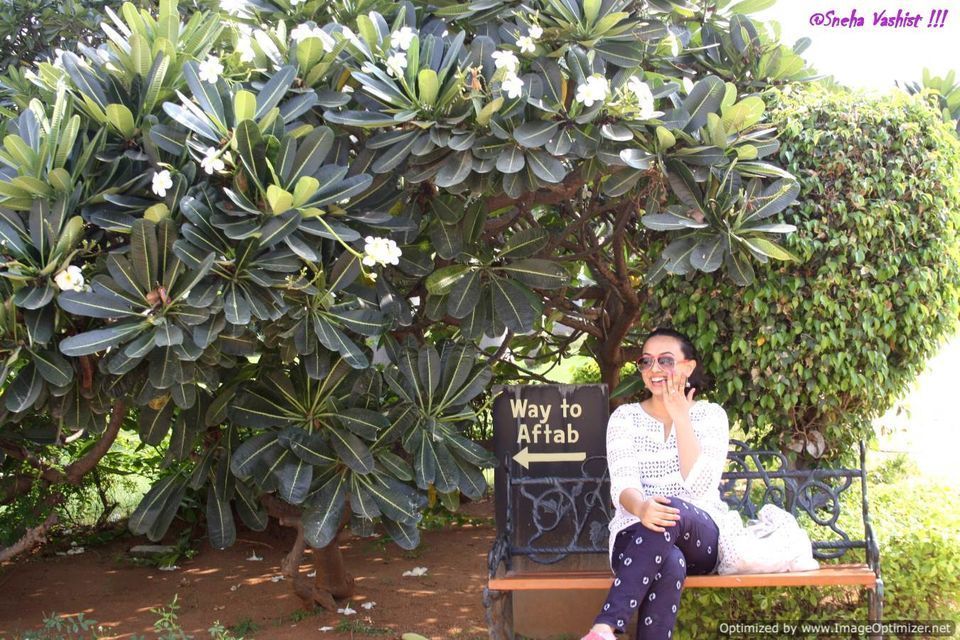 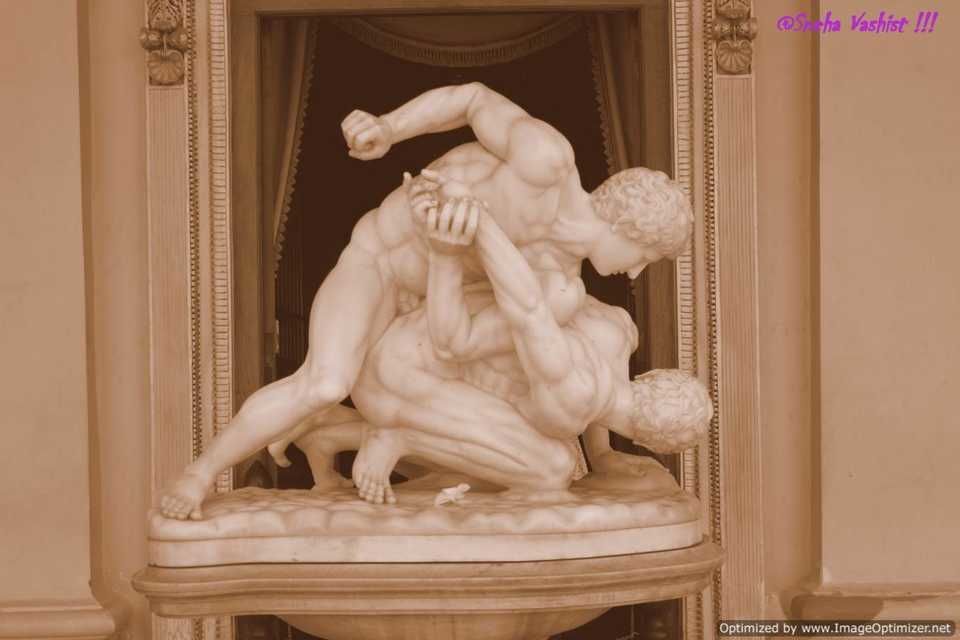 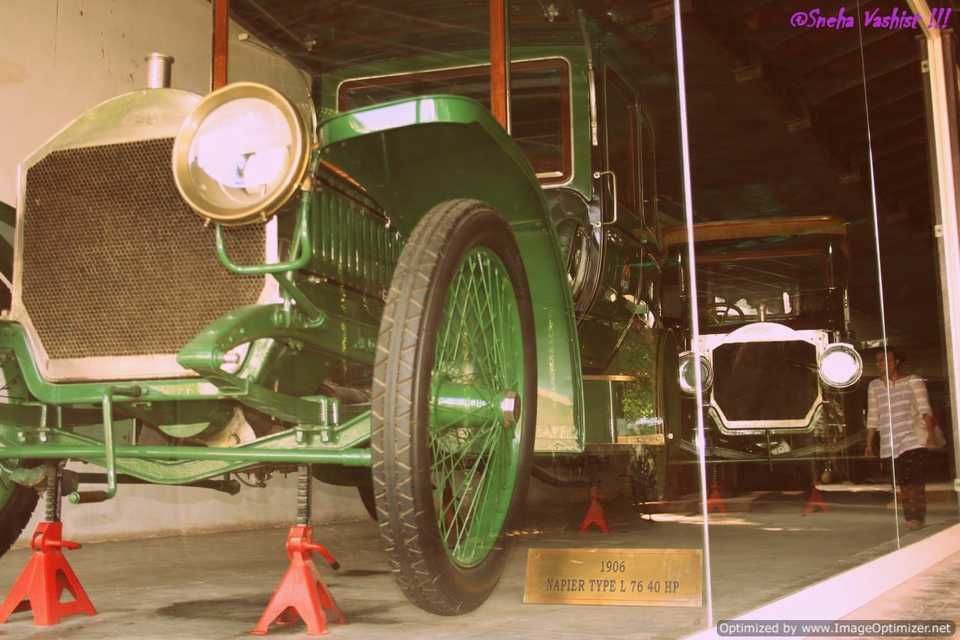 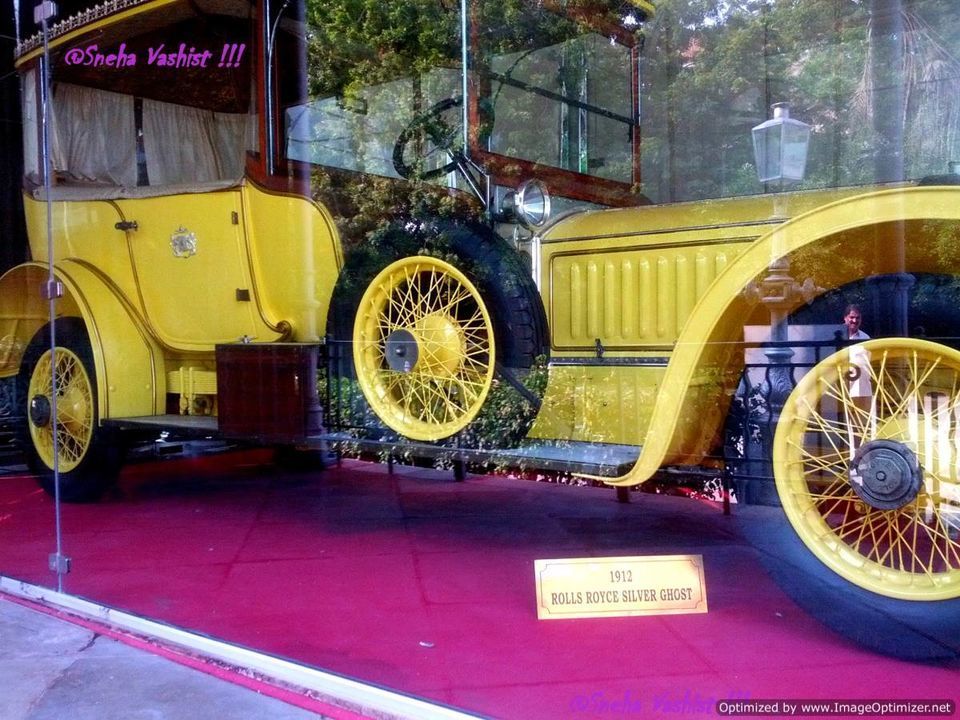 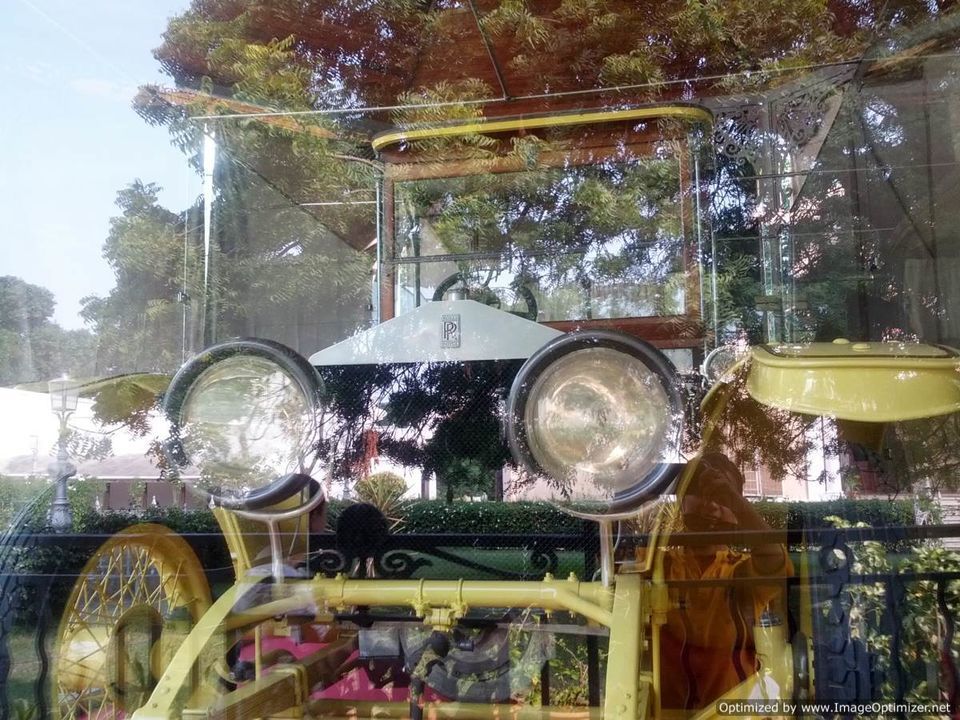 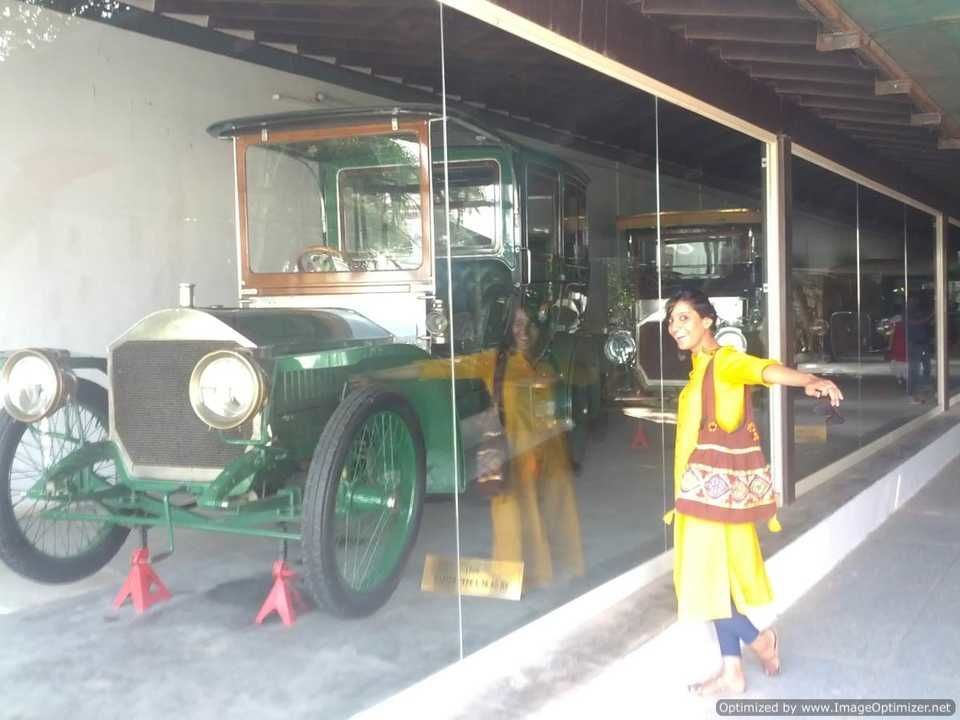 My personal favourite in this palace was the vintage car section. Royalty gets defined not only when it runs in your blood or through your clothes and jewellery. It is also defined when you travel grand. On royal wheels. I wanted to believe somehow that this palace belonged to me. Everything here was connected to me. May be in my past life. Let me quote myself, "This palace gives you dreams.

It was then time to say adios to this uniquely elegant 200 year old palace and head to some Biryani place nearby. When in Hyderabad, all you eat is Biryani ! Atleast, I wanted to follow that mantra. When asked around, locals suggested that we should try Shah Ghouse restaurant in the area for varieties of Biryani. Being a vegetarian, all biryanis taste similar to me. So, this was also one of the not so extraordinary veg biryanis for me but it definitely filled up my empty stomach. Do not hold on any high expectations in terms of ambiance and hospitality. Go for the food. Non vegetarians might get good options. But I would still suggest. Try it out and make your own opinion. 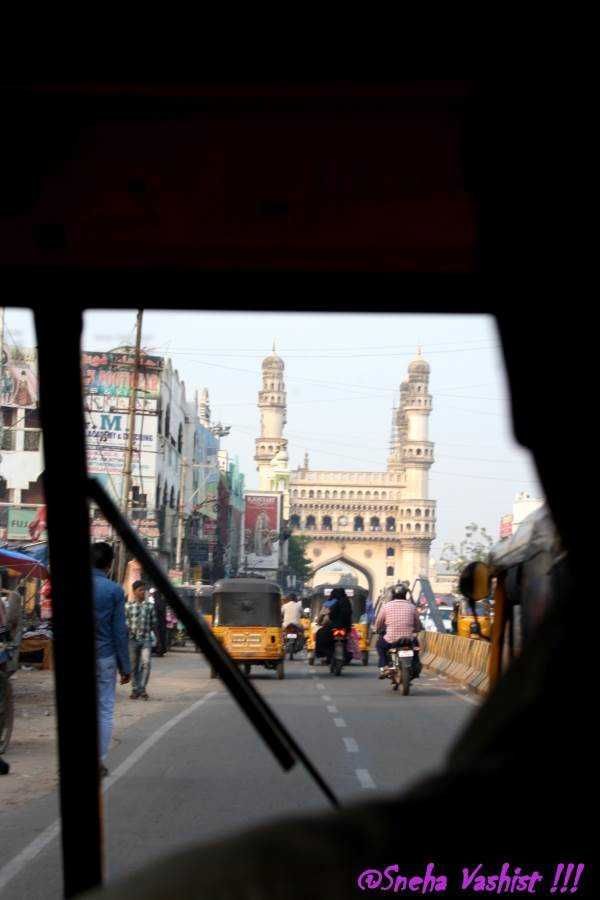 It was then time to explore the very famous minaret that symbolizes Hyderabad, the Char Minar and the buzzing market places around it. Situated in the heart of the old city, this monument is defines Hyderabad. Your trip to Hyderabad is incomplete if you do not take out time to visit this magnificent minaret. You say the word shopping and I am all lit up. I suppose all girls hold similar traits. 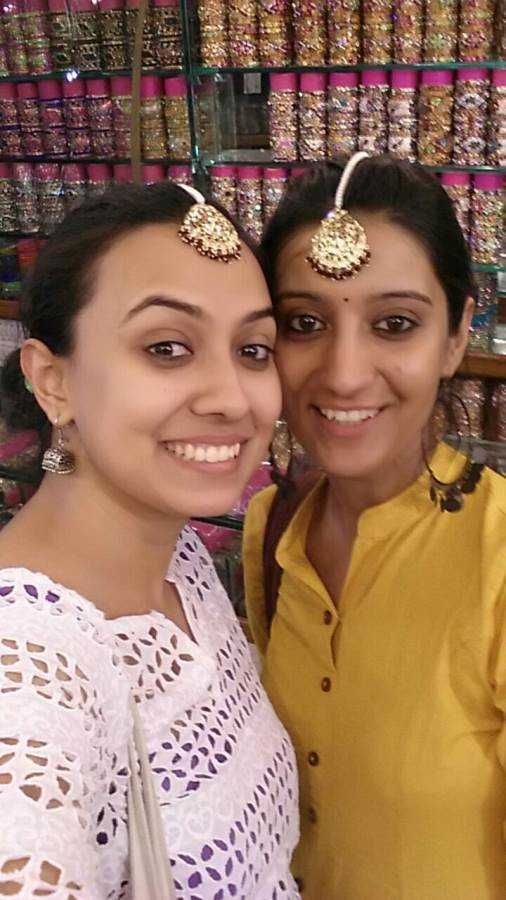 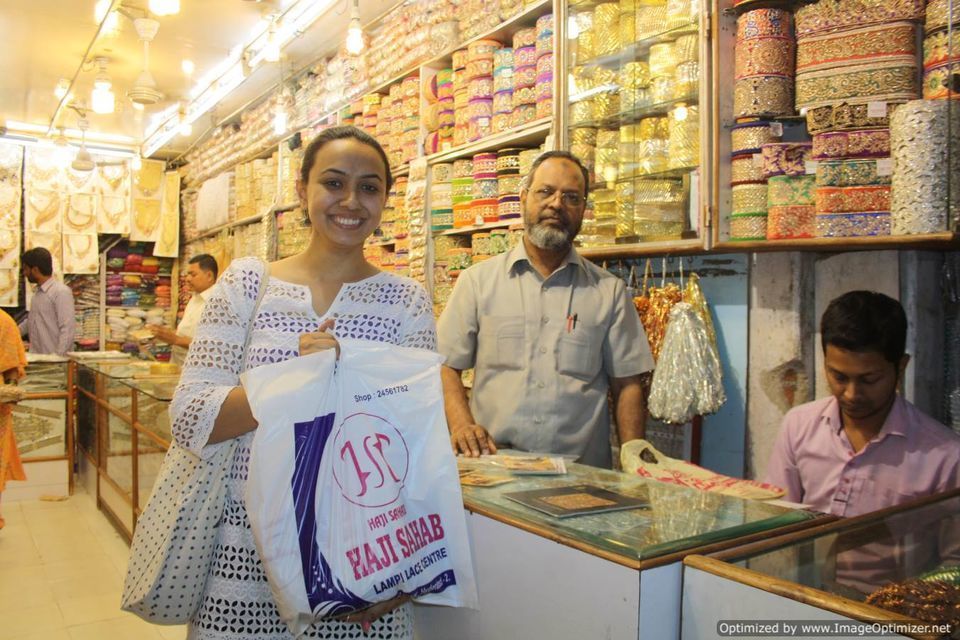 Laad Bazaar near Char Minar serves as a blingy paradise for shopaholics. It is a bustling market housing more than 100 shops that sell stone studded lac bangles. Mainly famous for bangles, this place is full of glitter. From varieties of bangles in thousands of designs, one can go mad about what to pick and what to leave. And not just bangles, laces, imitation pearl jewellery and what not.

I shopped like crazy and it was so many bags full of Hyderabadi shopping that compelled me to carry a statement Hyderabadi look for my best friend's wedding in Bhopal. Remember to bargain as much as possible. Bangles, maang tikas and chokers are definitely a must buy. Sorry for the cheesy lines but have to say, "Hyderabad me ho to motiyon mein khelna to banta hai boss."

After crazy shopping, it was time to head to Mozzam Jahi Market to relish handmade fruit ice creams at one of the oldest ice cream parlours in Hyderabad, the Famous Ice Cream. Around 60 years old, nothing fancy, table chairs laid out in open, one can relax in between the hustle bustle of the city and taste from varieties of available flavours like musk melon, chikoo, papaya, custard apple etc. Close by to this ice cream place is the very renowned Karachi bakery. I love bakery biscuits and this place is a must visit and a must buy kind. More than half the weight of by baggage was credited to Karachi bakery items. 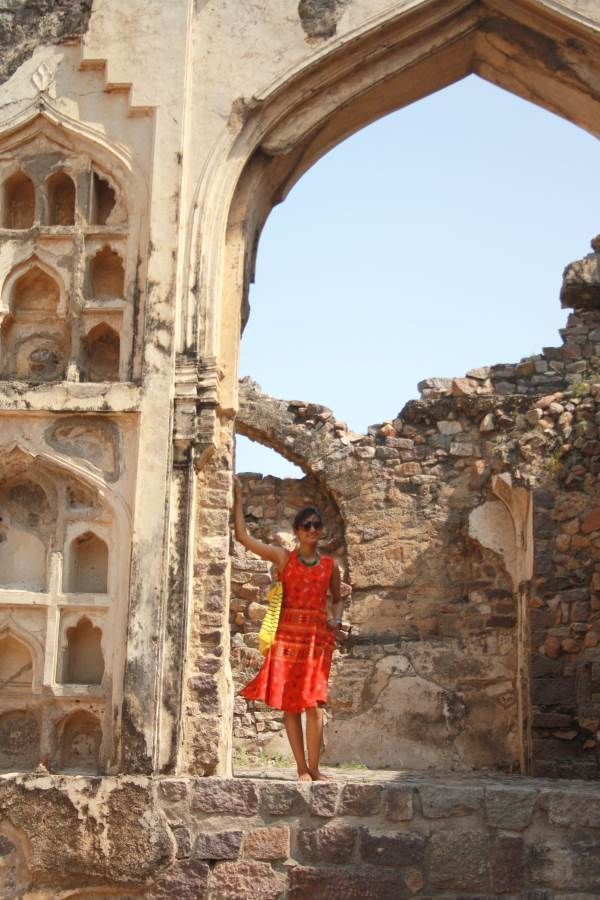 I started my 2nd day in Hyderabad by visiting Golconda fort. If you are a history buff or a photo fanatic or a selfie king/queen. This place is a must visit. This fort takes takes you back in time when the battles were fought and when the kings ruled. Beautiful architecture keeps you stunned. If someone plans to visit in the evening, light and sound show should not be missed. It is supposed to mesmerizing.

The next on my list was a tree, Hathiyan Ka Jhad. Does that sound funny ? So, actually while I was doing my research bit before making a trip to Hyderabad, I stumbled upon some random article online which mentioned about this 400 year old tree. I found it extremely fascinating and due to the proximity of this place to Golconda fort, I managed to plan out the visit perfectly in my head and even in reality.

I was a little skeptical initially if anyone would even know about this place but surprisingly an auto driver took me and my friend to this historical tree and even narrated us the known rumors about it. The point I am trying to make here is, it was more famous than I thought it would be. Hathiyan ka Jhad has got its name because of its humongous sized trunk which resembles like the feet of an elephant. It is located in the sprawling lawns of the Naya Quila premises of Golconda fort which is now a golf course.

One of the famous stories that the local residents believe is that this Baobab tree was once a shelter to the famous thief of the our childhood stories, Ali baba and the 40 thieves. Who knows if there is any reality to it but it can be true because the massive trunks encircle to form a hollow cave in between which can be used as a perfect hiding place as experienced by us and its perfectly dark inside. 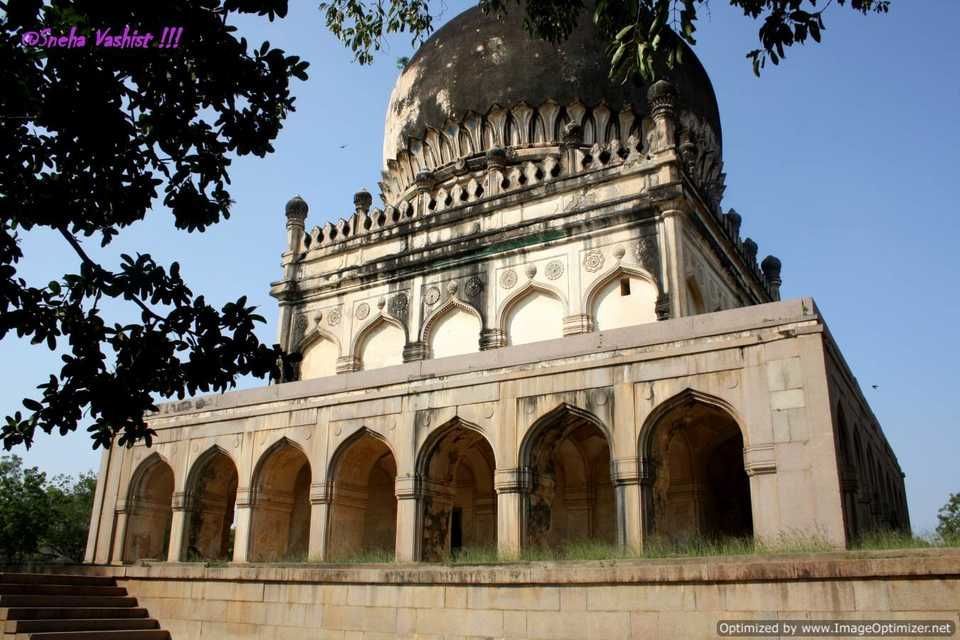 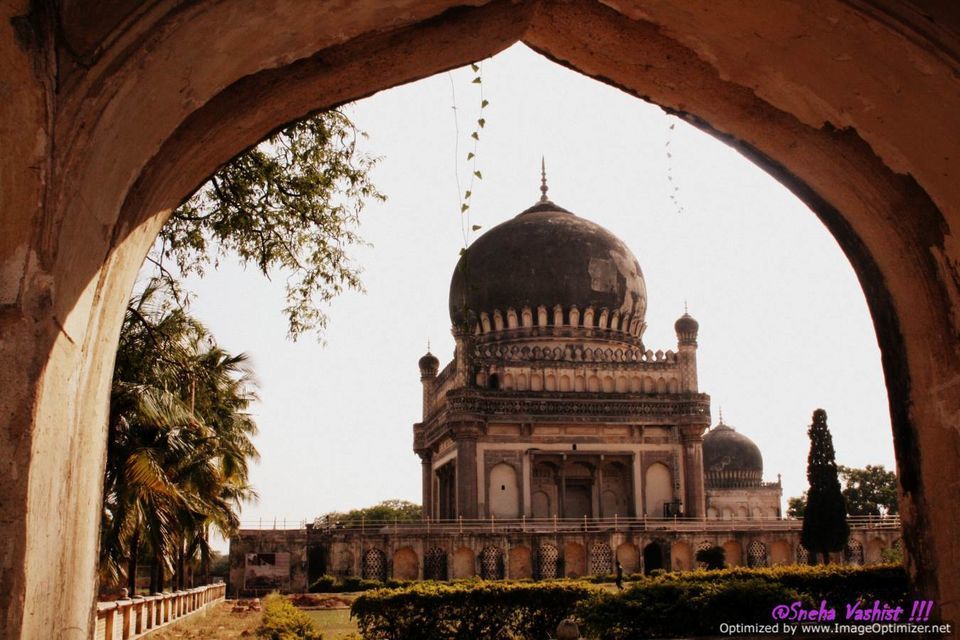 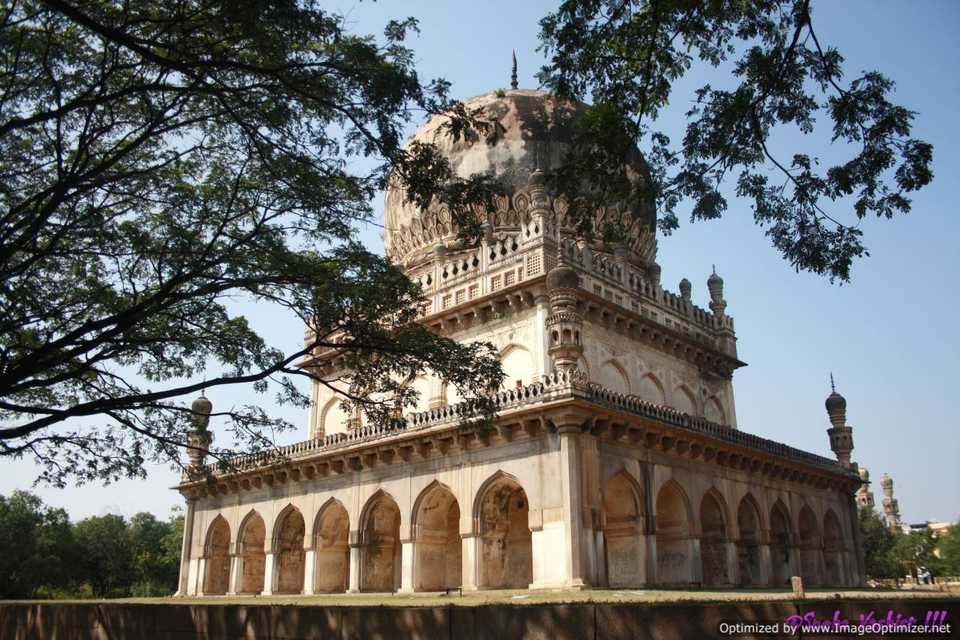 The archways at Qutub Shahi Tombs 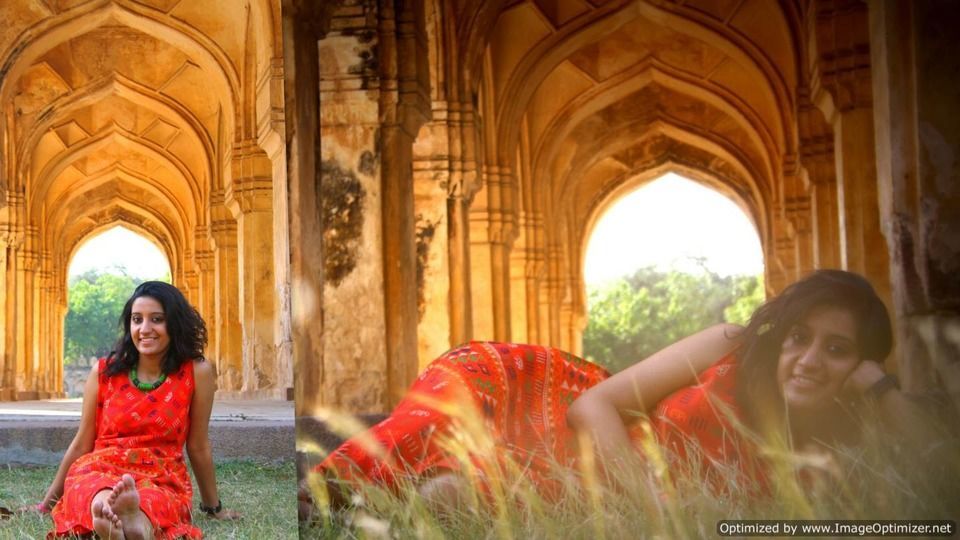 Qutub Shahi tombs was the next destination on the list. Closely situated to Golconda fort, it would not cost you more than 50 Rs from the fort in a rickshaw. Nowhere one would find so many tombs together at one place. These grandiose monuments have been erected in the memory of departed royal rulers of Golconda fort. The archways of the tombs are exquisite and compel you to get few stunning profile pictures for social networking sites. Magnificently splendid architecture of these tombs made me think, royals are even buried with royal elegance.

After the historical tour for the day, it was time to add some fuel to our engines. Following the biryani food mantra, I decided to try on Biryani at the very famous Paradise Biryani centre. Why this place ? Because it was suggested by all, like a must visit shrine for foodoholics. My reviews on veg Biryani, it was kind of good but not orgasmic. But again I would suggest, your taste buds and mine are different. 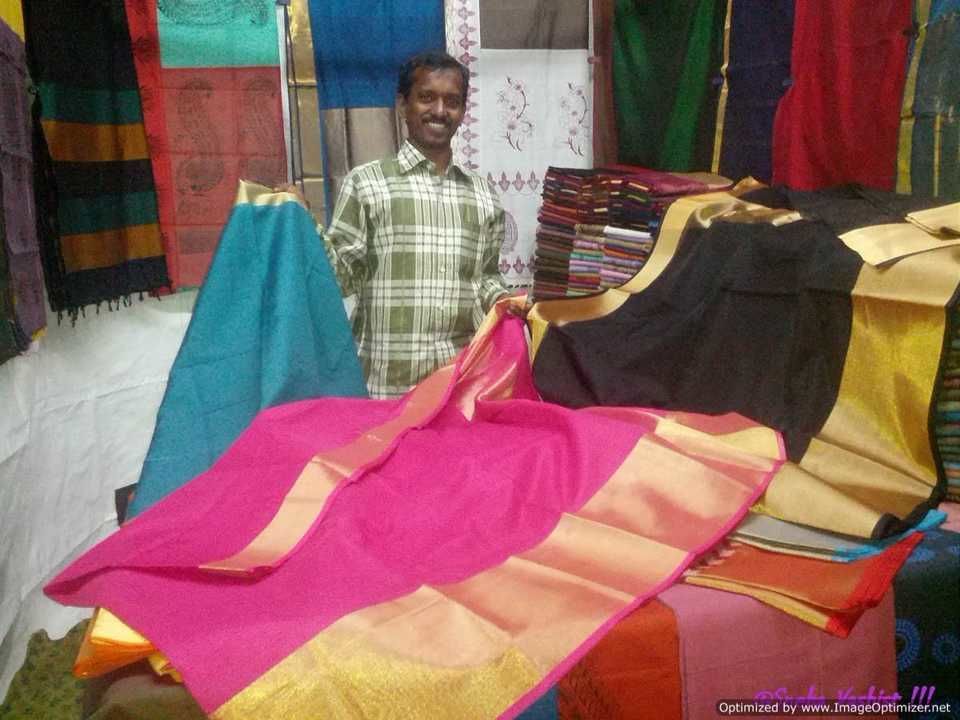 By evening, I just wanted to relax and do anything else other than dwelling into any kind or form of history. The plan was to make a visit to Shilparamam, a craft village with art forms and handicrafts. To put it in simple words, a bigger version of Delhi hatt with additional places to visit inside the village like rural museum, sculpture park and art gallery.

Relaxes your mind and some shopping boosts up your spirit. Make a visit if you have time in hand and you are staying at this side of the city.

A late night dinner with best friends at the open terrace of Coco's bar and grill with beer bottles in hand and music in the air felt like the best time ever. All is well that ends well. It was a perfect ending to a delightful eventful day.

The last day in Hyderabad was dedicated to one of the best known art museums of the world, the Salarjung Museum. 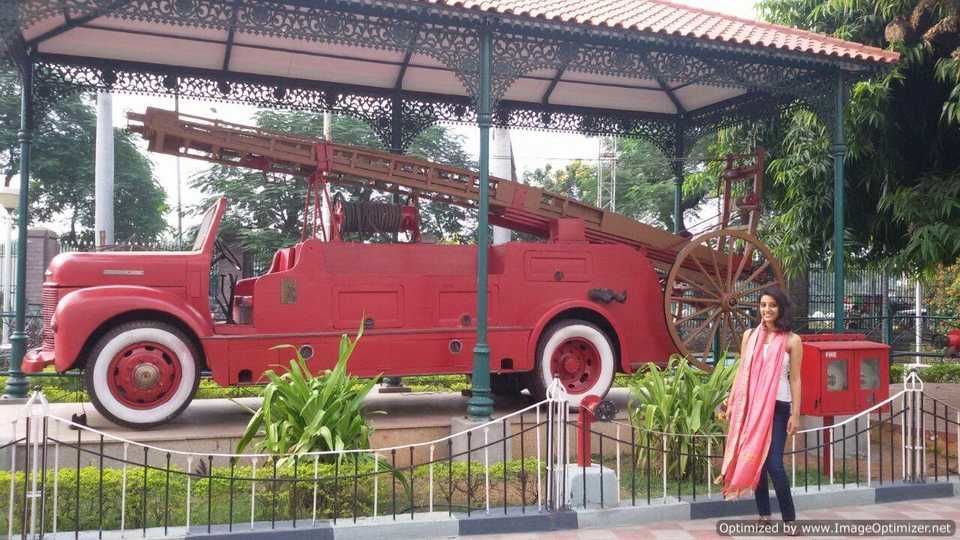 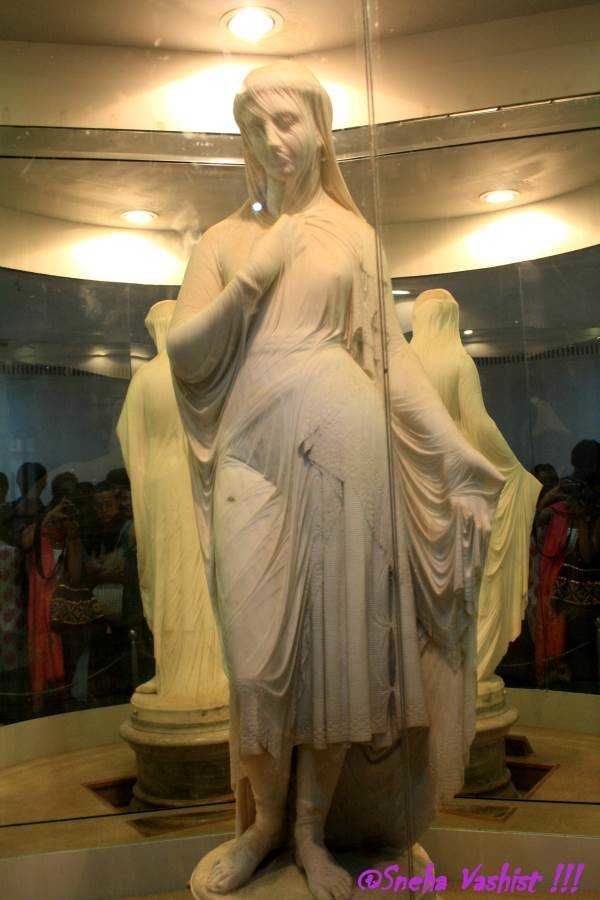 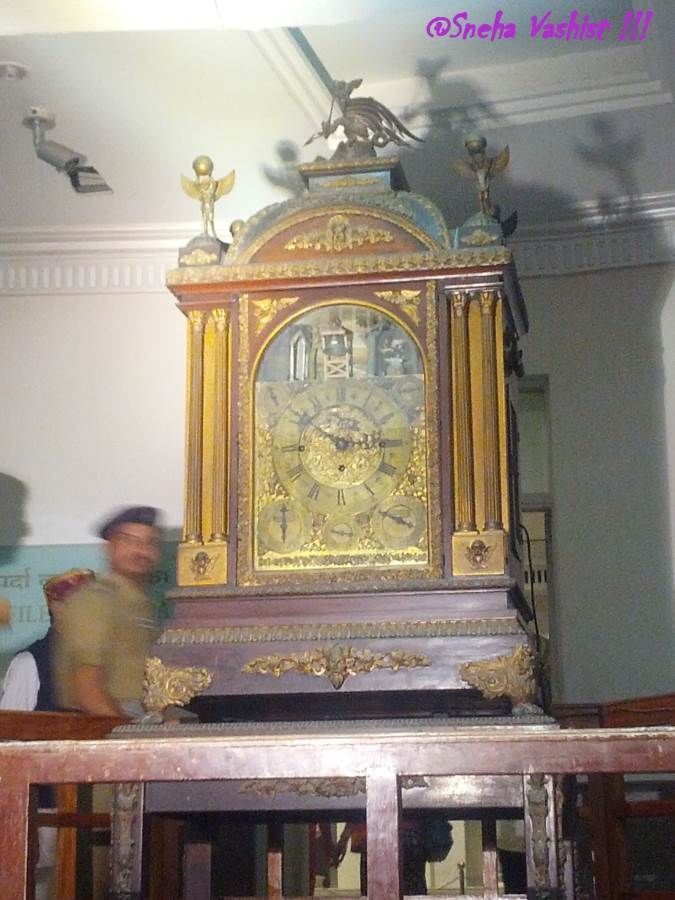 Having heard a lot about it from friends, parents and everyone around, it was a different kind of excitement to visit this place. We were warned that this museum is too big to be covered in a day and we will get tired and we might have to go for a foot massage later on. But who cared. Turning a deaf ear to everyone, I was all set to hang out to Salarjung museum for the day.

Doesn't matter if you are an art patron or not, this place stuns you with all that it has. The art objects collected by the art connoisseur, Salar Jung III are placed in this museum after this museum came into existence and was opened to public in 1951 by Jawahar Lal Nehru. One can spend hours in admiring various forms of art at this place. Though my personal favorites were Veiled Rebecca, Musical Clock and the double statue. The veiled Rebecca is said to be a melody in white marble and is considered as the most stunning art object in the world. It is surely a gem of Salar Jung Museum.

The double statue of Mephistopheles and Margaretta is another delight for visitors. Carved out of a single block of wood, this statue showcases opposite characters from a very famous German drama. It gets difficult to get your eyes off this beauty.

The clock room at the museum houses more than 300 clocks but the one that stands out and takes away all the attention is the Musical clock. This clock is a mechanical wonder, a toy figure of a watchman who pushes open the door, emerges hour after hour in a great hurry to beat the melodious gong that indicates time. It is placed in a corridor with chairs laid out for visitors so that you can sit back and enjoy the musical sound of gong.

Being a single man's collection, this museum feels like a wonder. It ended being a fantastic afternoon at the museum and I highly recommend it.

With the end of the day's trip, it was also time to say goodbyes to the queenly grandiose city of Hyderabad. I was ecstatic to take back with me an enamored experience.