The Stairway To Heaven - Hawaii 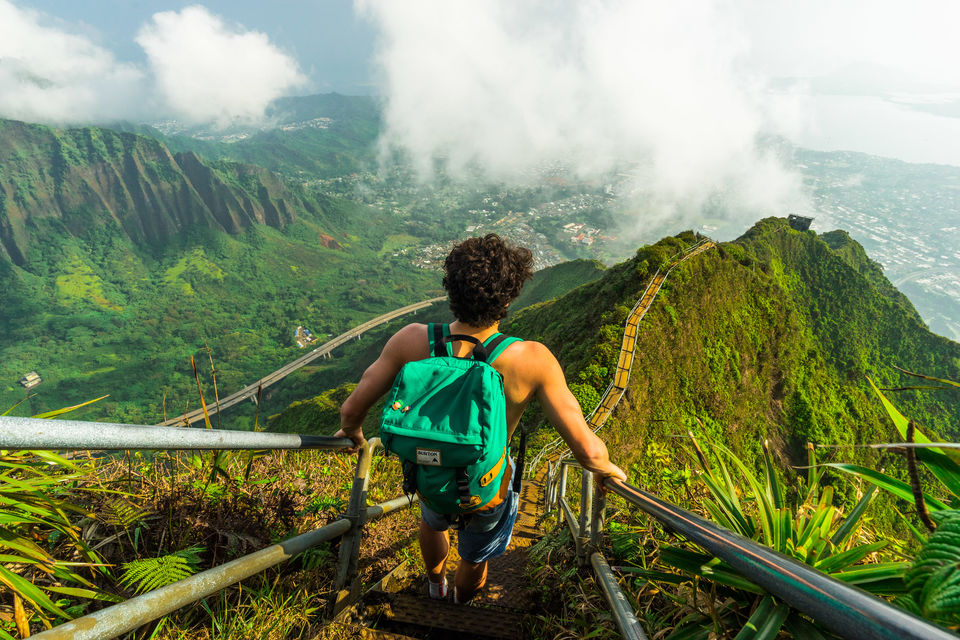 This post was originally published on my blog JourneyEra.com

The Stairway to Heaven also known as the Ha’iku Stairs on Oahu, Hawaii, is possibly the greatest attraction on the entire island. 3,922 stairs lead up the imposing mountain ridge, often at a vertical incline, with only a hand-rail to catch you from falling into the valley below.

Originally the stairs were built in 1942 by the U.S. Navy as a top secret facility for transmitting radio signals to ships that were sailing in the Pacific Ocean. The stairs were then opened to the public until 1987 when they were deemed unsafe because of disrepair.

The city of Honolulu spent almost a million dollars repairing the stairs and was considering re-opening the stairs in 2002 but resident complaints and safety concerns halted the re-opening and the stairs have been closed ever since. That hasn’t stopped hikers and tourists sneaking past a guard who is posted at the bottom of the stairs to experience the thrilling 4000ft long hike along an 18-inch wide staircase reaching heights of above 2000ft. 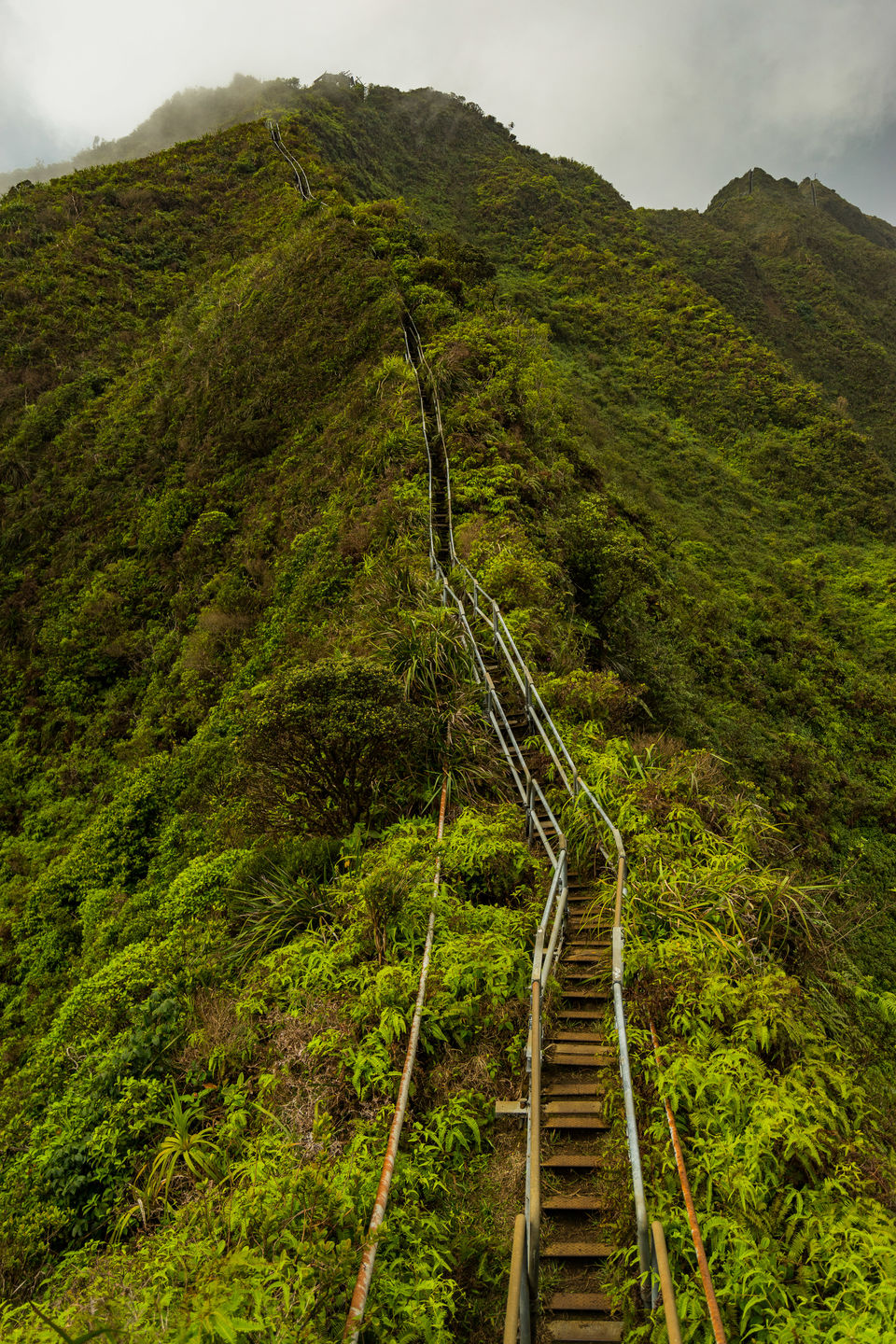 I had been on Oahu for over a year and despite contemplating the hike many times, the rumor of a $600 possible fine had scared me off. I am a college student trying to pay rent and that kind of fine could incur real financial trouble for me. I listened time after time as my friends would recount their experience of an amazing sunrise experience or about how they managed to sneak past the guard through the bamboo forest. I was also enticed by the many photos I had seen highlighting this extraordinary climb and views.I didn’t want to miss the unique opportunity of taking my own photos of this unbelievably scenic hike before I left Hawaii.

As time passed, the instances of the $600 fines being handed out seemed to have become more commonplace and many people began meeting the police at the bottom of the hike after they had descended back down the stairs. My nervousness about being caught kept my desire to attempt the hike at bay.

I had two friends visit and had promised them if the opportunity arose we would try and do the craziest hike they could imagine. One fateful night, the weather seemed perfect and we made a last minute decision to go for it.

OUR JOURNEY ALONG THE STAIRWAY TO HEAVEN

We were dropped off in the neighborhood at 2am in the morning on a very clear night, only a few light clouds hovered over the mountains looming above. As soon as we stepped out of the car a neighbour came rushing out of his front yard yelling at us with his phone pressed angrily to his ear. Startled by the old man walking towards us we quickly shuffled away to the “main entrance” only to find someone jumping out beaming a flashlight at us.

Well that was an interesting start! We crept off in the opposite direction towards an alternate entry point, well aware that the old man had been on the phone to the guard and quite possibly the police, warning them of our arrival. This heightened our sense of adventure considerably.

Walking through the neighborhood with our crew of six, as quietly as possible, our presence soon became blatantly obvious as a chain reaction of dogs blew our cover. With no other choice we hurried down the street to a small lane that led up a hill. We had to clamber over a barbed wire fence one by one that was very close to a neighboring home. I can definitely understand why people jumping this fence every night would be very annoying. I did feel some remorse for the neighbor trying to get a good night's sleep but unfortunately our mission was going ahead despite the barbed wire fence.

From here we had to sneak our way through knee-high undergrowth as quietly as six tired and anxious people in the dark can. A silhouetted figure appeared in the foliage twenty yards behind us and began yelling but we quickly scuttled towards the path and out of the shrubbery. We were now approaching the guard and we could make out a car in the distance. Already on private property and having passed multiple no trespassing signs we were understandably quite nervous.

No one was at the car so we walked straight past it and towards the stairs. I felt a huge relief as we began our ascent up the stairs as it is commonly known that the guards and police don’t usually climb the stairs to confront people. It felt like we were safe and could now enjoy our 3am hike to heaven.

In 2015 a huge storm damaged several sections of the stairs to the point where they were severely mangled. It isn’t incredibly dangerous but it definitely makes things interesting. A number of the stairs are loose and each step had to be taken with that in mind. 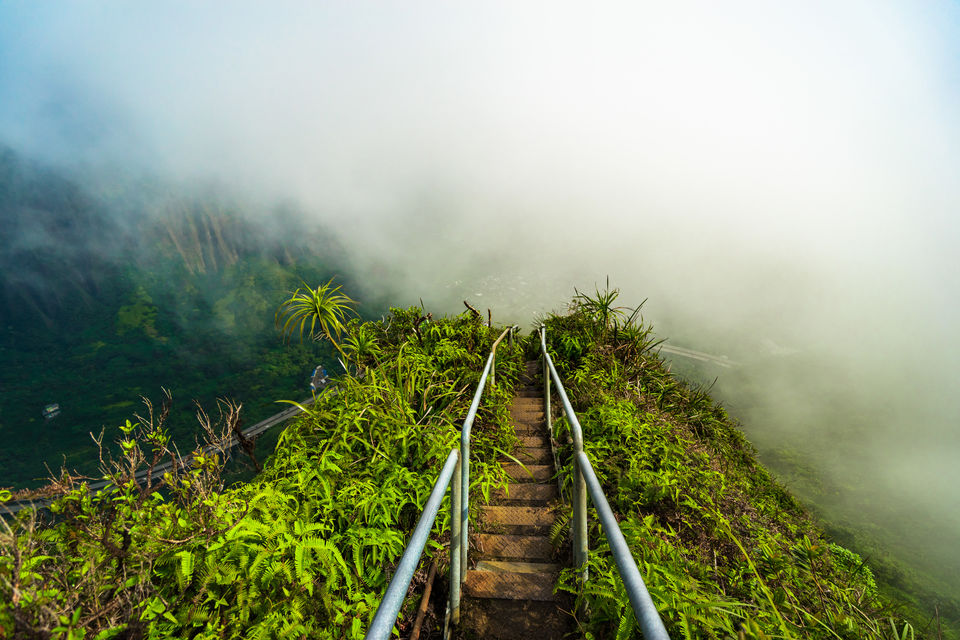 We hiked without headlamps and the full moon guided us up the narrow, damp staircase. I stopped frequently to peer down at the Highway that continually got smaller and smaller as we climbed towards platform one.

The full moon illuminated the stairs ahead of us and the smell of damp metal covered our hands as we made sure to always have a good grasp on the slippery railing. We continued to make our way carefully up towards platform two, where we found an abandoned cabin with old machinery lying inside. It felt as if we were on a post-apocalyptic movie, the last survivors searching for any other signs of life.

After almost two hours we were moments from reaching the summit. The final section of the hike has boards rather than stairs, which create a catwalk 2000 ft in the air on top of a sharp ridge. 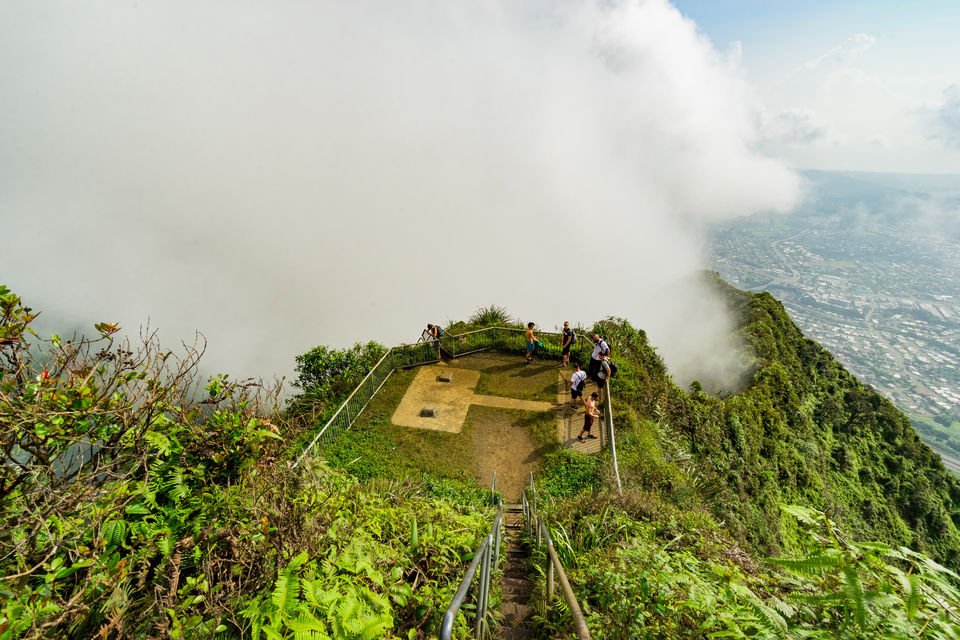 WE MADE IT TO THE TOP!

At the summit we found another old cabin with a huge antennae on top. We wandered around for a little investigating our playground in the clouds before we returned to the warmth of the bunker to wait for the sun to rise. Packing a spare change of clothes was a game changer. Being able to put on a dry shirt and jacket made a huge difference in combatting the wind at the summit.

After a short wait the sky began to glow a pale blue, then a purple and all of a sudden the sun attempted to break through the haze. It wasn’t the sunrise of the year but it shone yellows and oranges throughout Haiku Valley and lit up the stairway we had just climbed. 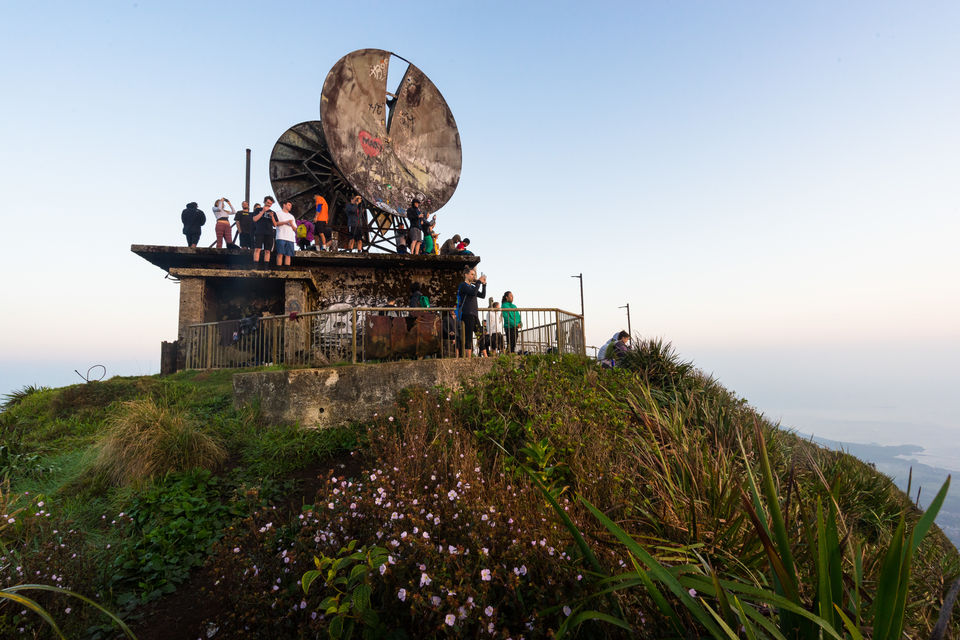 More than thirty people witnessed the sunrise with us and we watched them begin the descent down group by group. We began to contemplate when we should head down and which way we should go. The Moanalua Trail, is a 6 mile route down that would help you avoid the guards but you would also miss the views of the stairway on the way down and it would take 3-4 times as long. 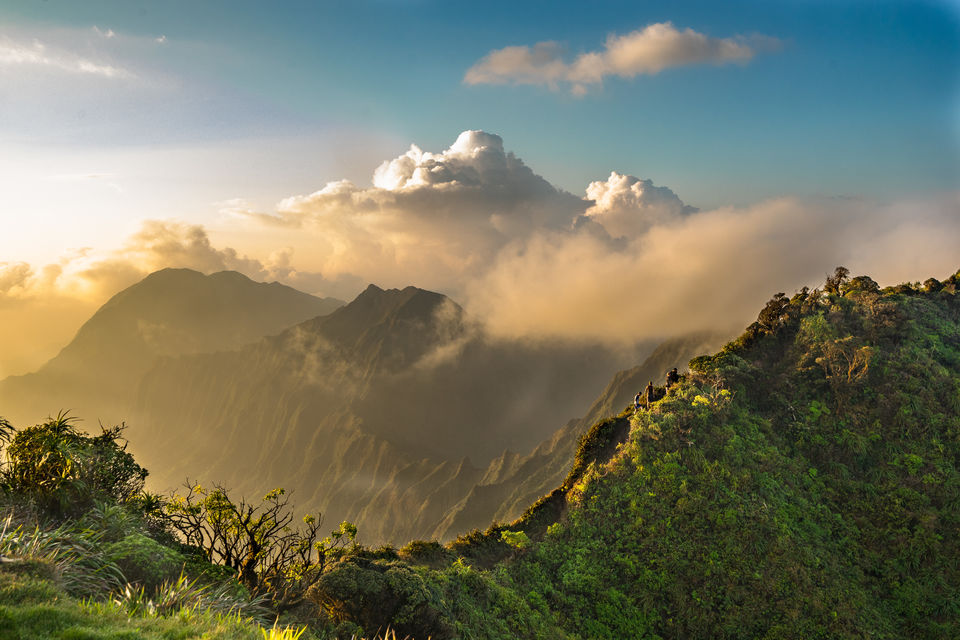 We decided to follow the crowd and headed down the stairs, only one old man remained at the summit when we left. The hike down was a photographer’s dream with hundreds of prime photo opportunities. We weren’t in a rush so I decided to hike most of the descent by myself so I could enjoy composing and setting up different shots. 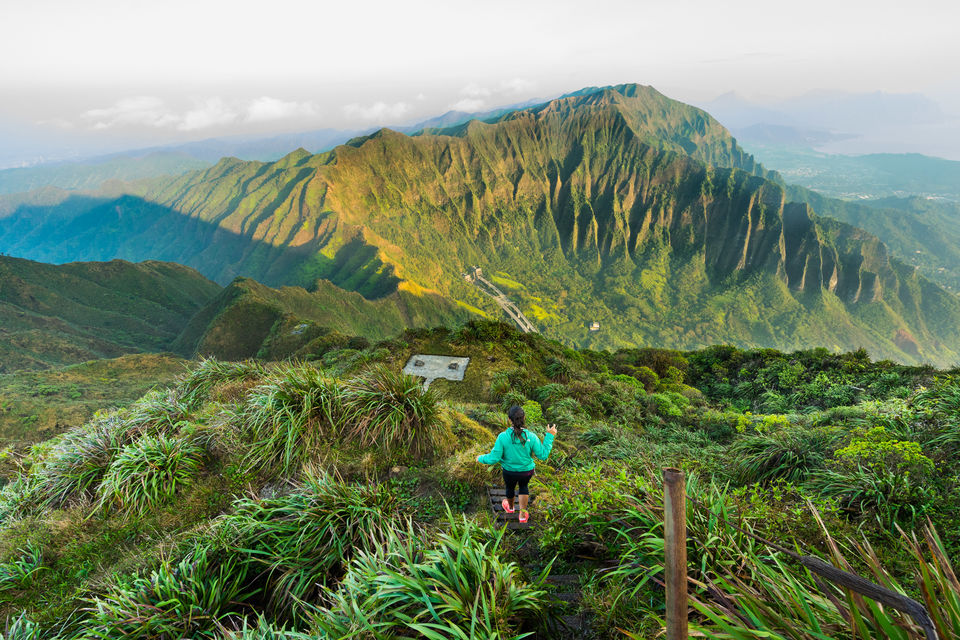 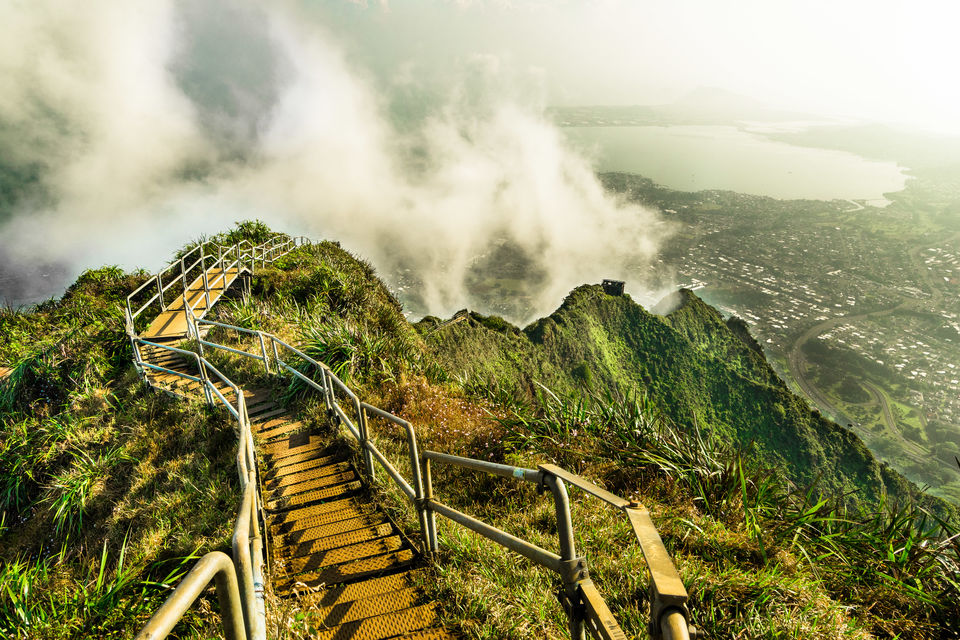 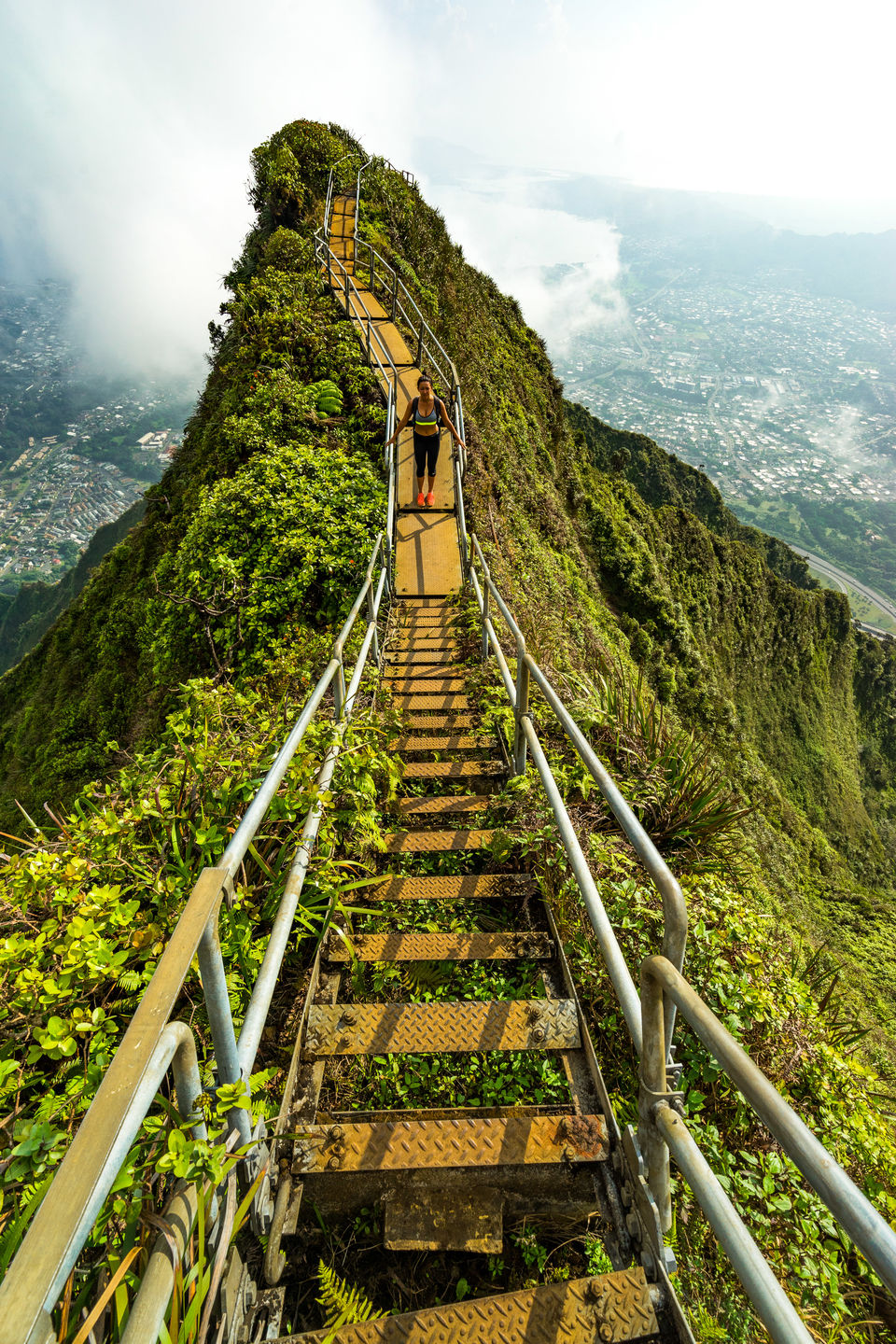 It is amazing to walk up in the dark and then see where you hiked as you descend down in the daylight. It took us less than two hours to make it to the beginning of the stairs. We could see the guard’s red truck parked at the foot of the stairs where it was in the morning but we decided to take the risk. In the end we didn’t clamber through the bamboo forest as many others do, we took a deep breath and walked straight up to the guard. He smiled, exhaled his cigarette smoke as he beamed, “I’ve called the cops, they must not have come,” as he began laughing to himself. Not sure if he was joking or not, we nervously chuckled, thanked him and went on our way.

Winding our way in and out of bamboo shoots we emerged from the forest inside an elementary school to the dismay of a worker. We apologized and put our heads down and followed his orders to take the gate out. We were almost free.

Making our way towards the final gate, we spilled into the neighborhood and saw no signs of any police or angry neighbors. I couldn’t believe we had just hiked the Stairway to Heaven.

This is truly one of the wonders of the world and makes you feel incredibly small, almost like an ant climbing a hill. The atmosphere of the hike is dreamy, eerie and post apocalyptic.

We recommend that if you do this hike, try as hard as possible to attempt it with someone who has been before. My friend led the way and I would have been lost without him. Having said that, show respect for the neighbors as much as possible and know that you are trespassing and breaking the law, something which we do not condone. 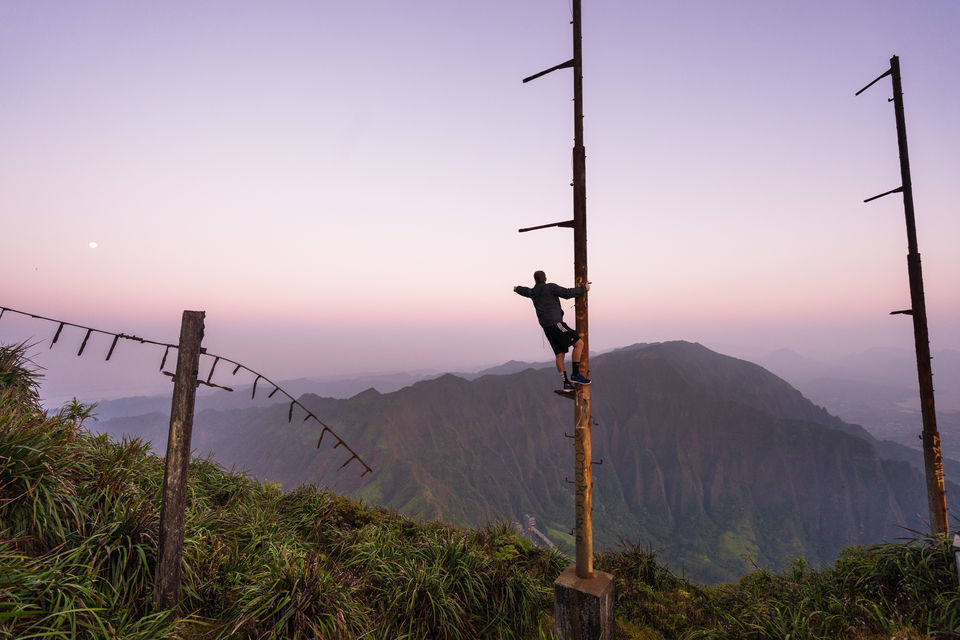 SHOULD THE STAIRWAY TO HEAVEN BE PULLED DOWN?

There have been several possible solutions thrown around about the future of Stairway to Heaven . How could it be possible to make the hike open to the public and also respect the neighbors right to privacy and safety in their own yard. Here are the options that have been discussed so far in the media, forums and by the state.

1. Charge tourists/out of state visitors $50-100 to hike the stairs while the hike remains free for residents of Hawaii. The money can be spent creating a small parking lot, maintaining the trail and creating safe entrance and exit points.

2. Require all people to purchase a permit for $10 from the Parks and Recreation Department. This paper would need to be shown at the entrance to the stairs or checked at any time during the hike. This would take the liability away from the state and is similar to the rules and regulations for camping grounds.

3. Paid tours with guides could remove the liability from the state and put the responsibility on tour companies who would need to act responsibly and safely with their clients. This isn’t a great option for residents who don’t necessarily want a guide.

4. Close the hike, pull down the stairs and the liability is then gone. Unfortunately this won’t ever work because people will still hike up to the summit and without the stairs there may be a higher risk of injuries or fatalities for hikers.

5. Use a lottery system similar to other national parks, which allow only a small number of lucky lottery winners into the park each month.

What do you think the best solution could be? We would love to hear your thoughts in the comments below.

I wrote another article you may like about The Best Sunrise Hike On Oahu http://www.journeyera.com/the-best-sunrise-hike-on-oahu/