Mauritius. It’s all about lounging by the pool sipping cocktails, fine dining, glamour,… and honeymoons, right?

Well, actually- the island, in the Indian ocean just 2,000 kilometres off the southeast coast of Africa is looking to reinvent itself as an island for the adventurous too…..

I’ve just spent a week at the LUX Le Morne hotel on the South West side of the island, where the UNESCO World Heritage site,, Le Morne Brabant stands over 550m tall behind the resort, hinting at the adventures that lie beyond the beach, and reminding us of the islands associations with slavery.

The peninsula was notorious in the early 19th century as a refuge for runaway slaves. The story goes that after the abolition of slavery on Mauritius, on 1 February 1835 a police expedition travelled there to inform the slaves that they had been freed. However, the purpose of the expedition was misunderstood and the slaves leapt to their deaths from the rock.

Nowadays there is only one man that is allowed to guide walks on Le Morne Brabant;Yan De Maroussem. The mountain trekking and trail running guide has been working for several years to set up an association to promote trail running on Mauritius and now they organise 12 races during the year, including the Dodo trail.

There is an interview with Yan on mysoundcloud page, with more about trail running on the island, his cheese diet, and why women are better trail runners!

It’s little wonder he is involved in the new LUX* ME Wellness Adventure Programme in conjunction with London’s SP&Co. The programme is aimed at enabling guests to get fit amongst the natural beauty of Mauritius.

This means activities such as hiking, stand up paddle boarding, kite surfing, scuba diving and sea kayaking along with a tailored programme of spa, nutrition and yoga -depending on your level of fitness. – this was a big change of scene for me and I was really looking forward to it. Some of the activities the island has to offer can be read about here.

On my first day at LUX, I’m met by Stephen Price, who set up SP&Co, after a retiring from playing cricket professionally. Stephen takes just 10 minutes to carry out a ‘ body balance analysis’ or ‘functional movement screen’ – a set of exercises, such as lunges, core work, linking hands behind my back etc, to determine any weak links and prescribe corrective exercise to ʻiron outʼ these weaknesses.

I already knew that I had very tight calves and Achilles which restrict things like flattening my foot as I walk uphill and I had been wondering if this was affecting my uphill trail running, Stephen said that, indeed I was taking the strain of the hills through my quads and not really engaging the gluts and hips- so the front of my legs gets fatigued quickly.

Later in the week, I’m given a range of exercises to do, which included using a foam roller to “roll out” my stiff muscles, (no stretching prior to exercise, just rolling) and other movements which really trained bursts of power, such as bear crawls, crab crawls and jumping like a frog across the floor, deep lunges, sumo squats hurdle steps etc, and were really exhausting. I initially thought there would be no way I’d want to go to a gym on an exotic island, but you really do just need 45 minutes for a whole training programme and in fact I ended up having three sessions in 5 days I enjoyed them so much.

Next I’m off to see nutritionist, Eve Kalinik, who has been working with the hotel’s chef to tweak their menus, making them nutritious as well as very tasty- (you don’t feel deprived after a three course dinner with brownies and cashew nut cheesecake to finish.) This was something I was really looking forward to as- although I do know how to eat healthily- I’ve found it really hard since moving to Chamonix for various reasons- including the fact that there is less variety in the supermarkets, there is always an excuse to go out drinking and food is more expensive – I can certainly forget trying to buy ‘almond milk’ ( you have a hard job to even find skimmed milk) cashew nut and coconut butter etc, and I can just imagine the look on my flatmates face if he sees me trying to make own, straining nuts through a “nut milk bag”. However, it has given me the shake-up I needed. Eve is passionate about eating well- and it’s not at all about cutting out fats- I gawked when she suggested cooking with ghee as it’s a more stable fat!

After a chat about my diet (during university I was told I was yeast intolerant- which I ignored as it meant giving up booze ) I am given a programme with advice on supplements which I can have delivered to France, gluten and lactose free menus- with a leaning toward vegetarianism- and advise on lifestyle; I basically do not get enough sleep as I prefer to work late into the night- then can’t switch off. I’m given a shopping list with store cupboard basics and a handful of recipes, all devised by Eve and I’m fired up to get healthy again.

The rest of the week consisted of kite surfing, paddle boarding, gym sessions and sea kayaking. So whilst you are in a resort- which I assumed wouldn’t be my thing – you actually get to really enjoy what the island has to offer, have some unique experiences and learn some new skills, without feeling like you are training. And you are given the tools to continue the good work when you go home….. the perfect kind of retreat in my opinion…

How to book a Fitness Weeks at LUX The prices for the wellness adventure week start from:

After a ‘jet lag massage’ ( we are allowed a massage as day as part of the programme) we had dinner devised by the hotels chef and tweaked by Eve; pan fried scallops with noodles and greens, green papaya salad with peanut and dry shrimp, various stir fry and curry dishes followed by banana ice cream- made from just banana…and I head of for my first early night in what feels like years- wanting to be fresh for our hike to a beautiful secluded waterfall in the Black River National Park. 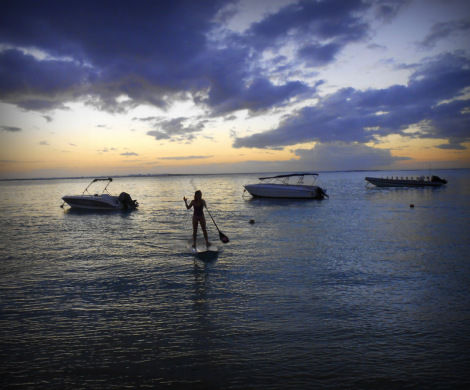 After breakfast we head up along a 4×4 track to the first stop at 130m, in the distance we see the kites lagoon and right across the island from the beautiful, mountainous south west side to the flatter north, with the national park in the distance.‘Don’t stretch your muscles beforehand… ‘says Yan, echoing the advice of Stephen Price. ‘ This damages muscle fibres.’ Yan is about to run the Ultra Marathon the ‘Grand Raid’ on the nearby island of La Reunion, with 162 km to cover and 9643m of elevation gain, so I listened…‘You can only digest so much carbohydrate, so I no longer eat sweet stuff – I have 160g of cheese in the morning, with a little bread and oil, then drink for the following hour. During a race I only have protein bars, in small quantities, and soup during the race for salt. The night before, its fish and vegetables- I don’t believe in carb loading….and I only run on water, all sports drinks are too sweet.’I believe day to day the body is designed to digest fat in the morning and there are only two hours in the afternoon it can digest sweet stuff, then at night fish, and sea food, no red meat in the evening, only at lunch time when I have 200g of red meat, 500g of carbs in afternoon or 300g if I’m not training. Then twice a week you can have a ‘gala meal’- anything you want plus booze, but no frequent drinking.’Trail running is popular on Mauritius and Yan is trying to promote it. There is a calendar of events, including the Dodo trail in July, the – Royal Raid 35-80Kms Mauritius Mountain Run on the 11 May and the Mauritius Marathon 14 July 2013 and the terrain of the island here certainly lends itself to trail running.At 335m we get to the single track and can see the Black River peak which the Dodo trail goes through. Yan tells to us about the flora and fauna; there are rare species here such as the Trochetia here: the traditional flower of Mauritius. There are also stags, which are hunted 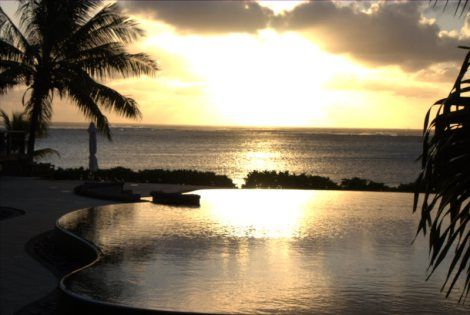 The offshore reef that surrounds almost the whole island is the main factor in creating this paradise of beaches and lagoons (and keeps the sharks out!)So a wellness week wouldn’t be complete without watersports and this morning I was up early for a very special kind – swimming with Dolphins- in their natural environment of the open water- not a pool.We met at 7am at the hotels boathouse and headed off to Black River Bay. Not long after we arrived, schools of dolphins glided past, some jumping and spinning in the air around us, not worried about the attention they were generating. Popping on our snorkels, we jumped in the water, waiting for a flash of silver to pass…We are told to just ‘swim, swim, swim’ to keep up with them, me trying to remember my best open water swimming technique ….and at one point I was completely surrounded by dolphins!I’ve done quite a bit of scuba diving in the past and am an advanced open water PADI diver. But it’s been a few years since I last dived, so once we returned from the dolphin swim and had breakfast, I took a quick refresher session in the pool, under the instruction of Emanuele Senatore from the hotel’s dive school.We then headed back out to a dive sight called ‘Aquarium’ and spent 35 minutes spotting Carpe, Halfmoon Butterfly fish, Yellowfin Goldfish, Black Spotted Puffers, and Vagabond butterfly’s, swimming amongst coral.In the afternoon, we have a session with leading aromatherapist, Shirley Page who designs the LUX Spa products, which are all geared towards purity; high grade, organic ingredients, so no pesticides that can penetrate the seed and cause skin irritation. Shirley gives us a demonstration of her products. ‘Oils can affect our mental state,’ she says, ‘ as well as our body and skin. Essential oils are the only substance that can pass down the hair shaft to the blood stream, so we can use them as mood enhancers, to help us decide how we feel. 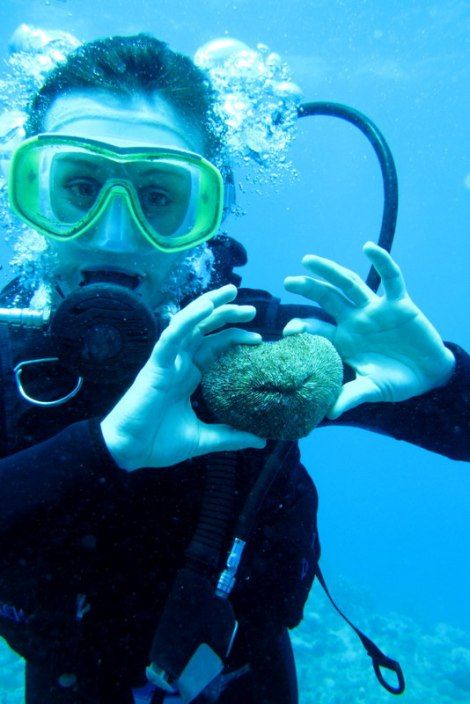