This was my first solo trek and it was better and much more than I had expected it to be.

More on: The Raw Traveller

Trekking solo in India unlike west, remains unknown, untried and un-thought of and hence looked at with raised eyebrows, weird faces emitting amusement and skepticism; and also sometimes with an acknowledgement for some kind of an accomplishment.

To me, it is a necessity and seems absolutely normal. 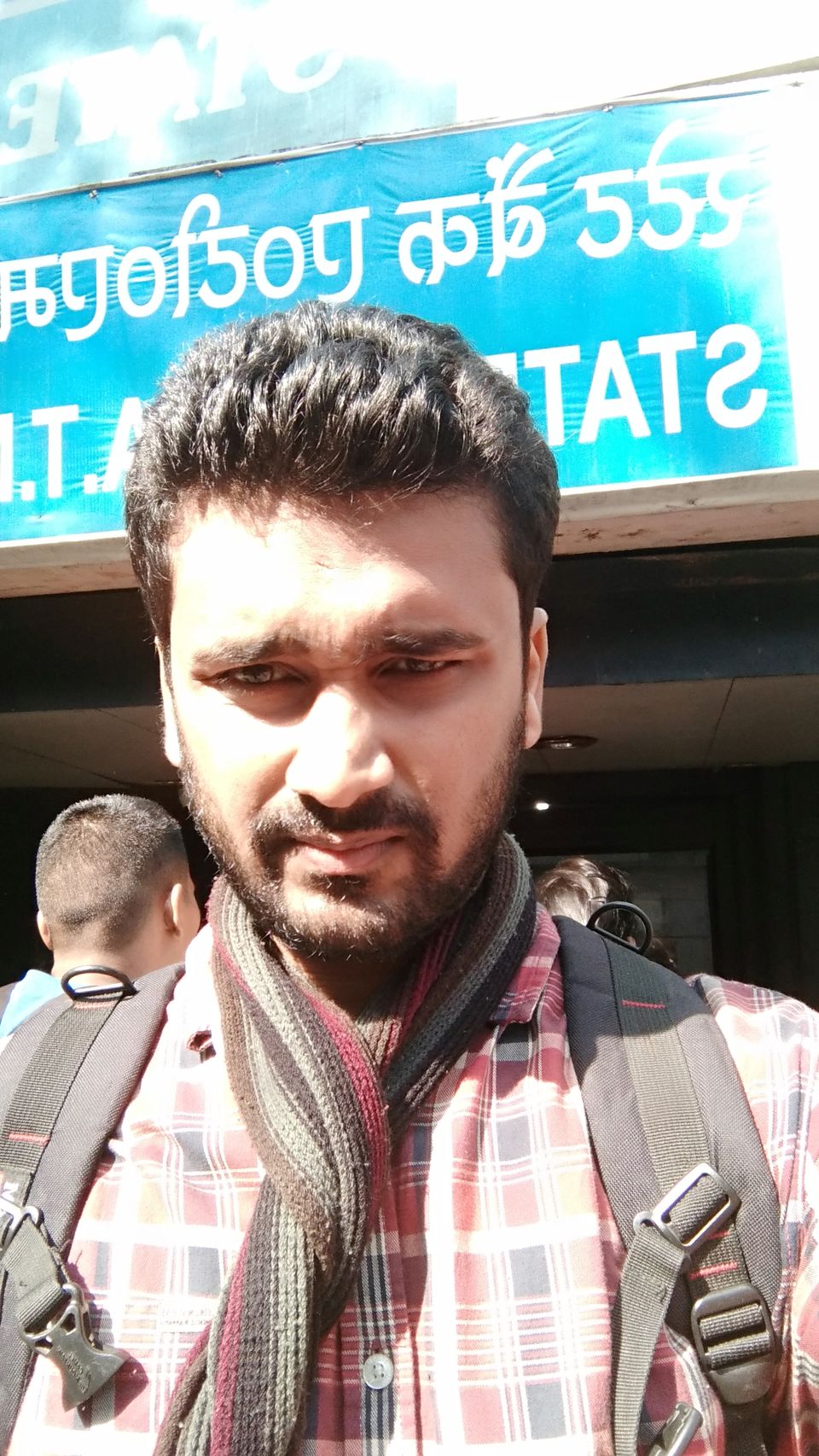 After going through a lot of treks on the web, I had finally narrowed it down to Deorital-Chandrashila. Lake, forests, meadows, snow capped mountains, the feeling of the summit; all were on offer in this exciting trek.

An overnight bus from Delhi took me to Haridwar in about 5-6 hours. The early you reach, the better, so that you can take the bus to Rudrapayag and reach by noon. Buses from Haridwar start as early as 04.30 in the morning since none ply during the night. The route throughout runs alongside the aqua blue Ganges and you can feel fresh air around.

(Note: The journey is long and may not be most comforting in the crowded local buses, but that is the essence of it all.)

Halt on the way to Rudrapayag for a quick tea and some snacks. 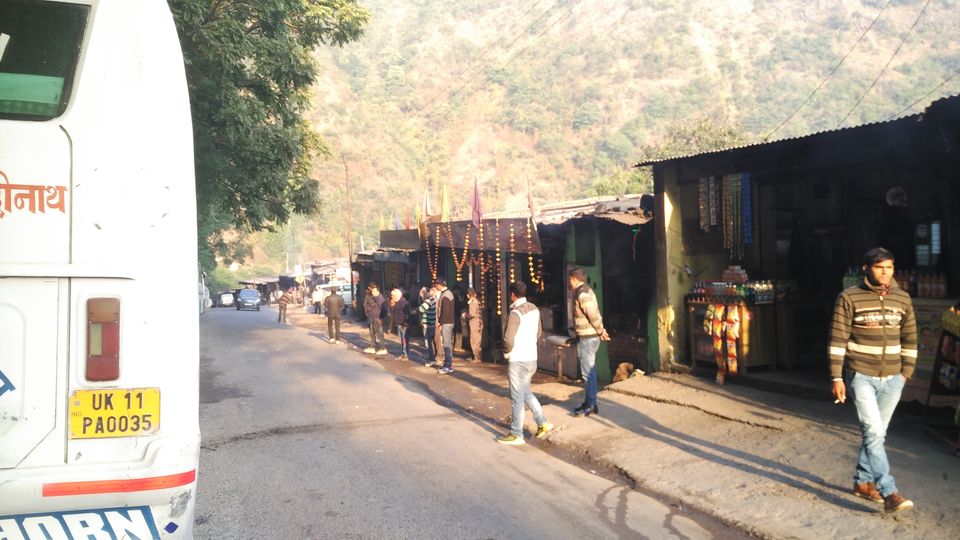 The bus dropped me at Rudrapayag at around 11.30 am and I was in need of a break after the long journey. Had my breakfast and went about for a walk in the small town.

After speaking to a few locals, I visited the Narad temple and took a dip in the cold flowing water at Sangam.

One can spend some time here and enjoy the sangam (the point of confluence) of the Alaknanda and Mandakini river and immerse in the vibes of the holiness of the city. 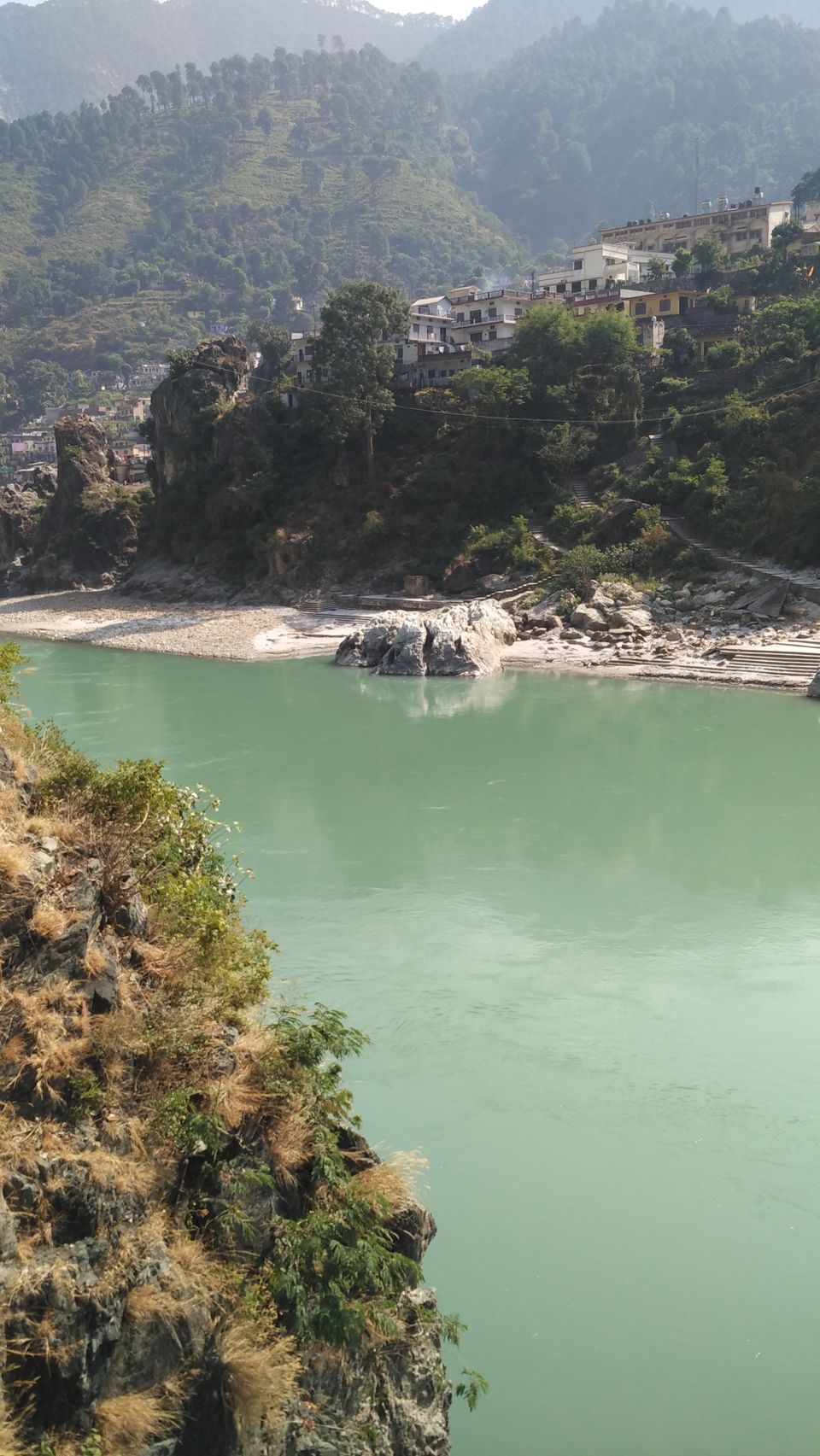 How to reach Sari ?

Sari is where the trek to Deorital lake starts.

Alternatively, one can hire a shared jeep from Rudraprayag to Agastyamuni and then to Ukhimath in the same mode. Since there are few buses from Rudraprayag, you may have to wait quite a bit.

On the bus to Ukhimath, I found company in a group from France who were also on their way to the lake. Travel stories and plans were discussed. There is this thing about travellers; they bond in no time and have lots to talk about, though everything directly or indirectly comes down to the same thing i.e travel.

It had started to drizzle and none of us were sure if the trek should be undertaken that evening. We reached at around 4 in the evening and the weather was still gloomy. The French stayed at Ukhimath and I decided otherwise. I immediately took a cab to Sari who charged me 500 bucks for the drive which otherwise would have been a mere 20.

(The next bus to Sari would leave in another half an hour and I couldn’t afford to wait; courtesy- the uncertain weather.) 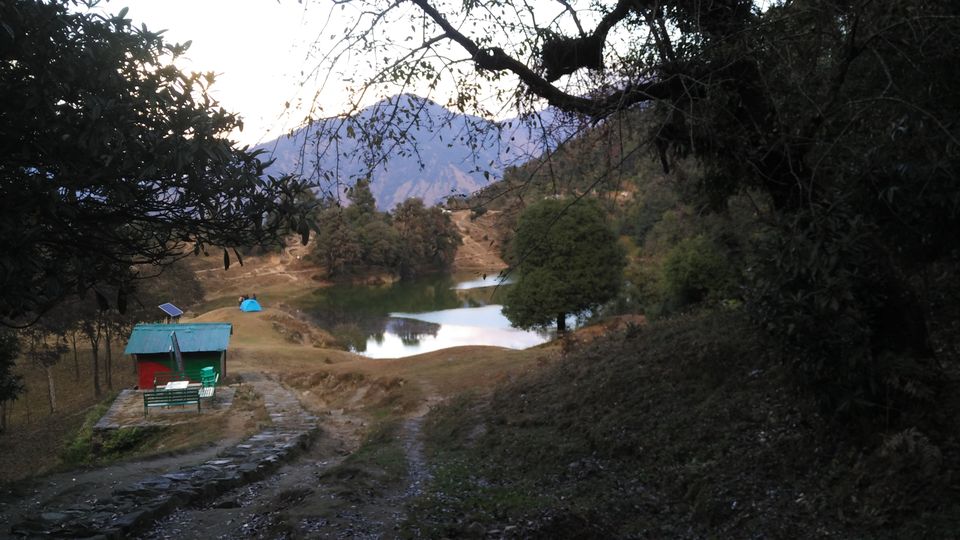 The trek to Deorital lake starts from the village Sari. Though it is only a 3km trek, it is an uphill and well defined trail and will take around 1-1.5 hours. Since I was here on the eve of Diwali, I hardly found anyone on the trek until I reached the lake and found a tent being fixed. I was relieved.

The lake reflected the mountains and was looking magnificent. It was about sunset and mountains changed from impeccable white to red, orange and pink.

My tent was fixed by a local and I found company in a guy group from Dehradun. A young couple from Hyderabad also joined us later that evening. It was great to see that out of all the places, this couple had chosen to be here at this lesser known serene lake in this festive season- far from the madding crowd, from thousands of miles away. (Wish more travellers like them.)

It was getting cold; we had our dinner and the night was spent at the campfire under a zillion stars visible through the naked eye.

Must visit: Trek to Valley of flowers and Enchantment

From the trek to Chopta. 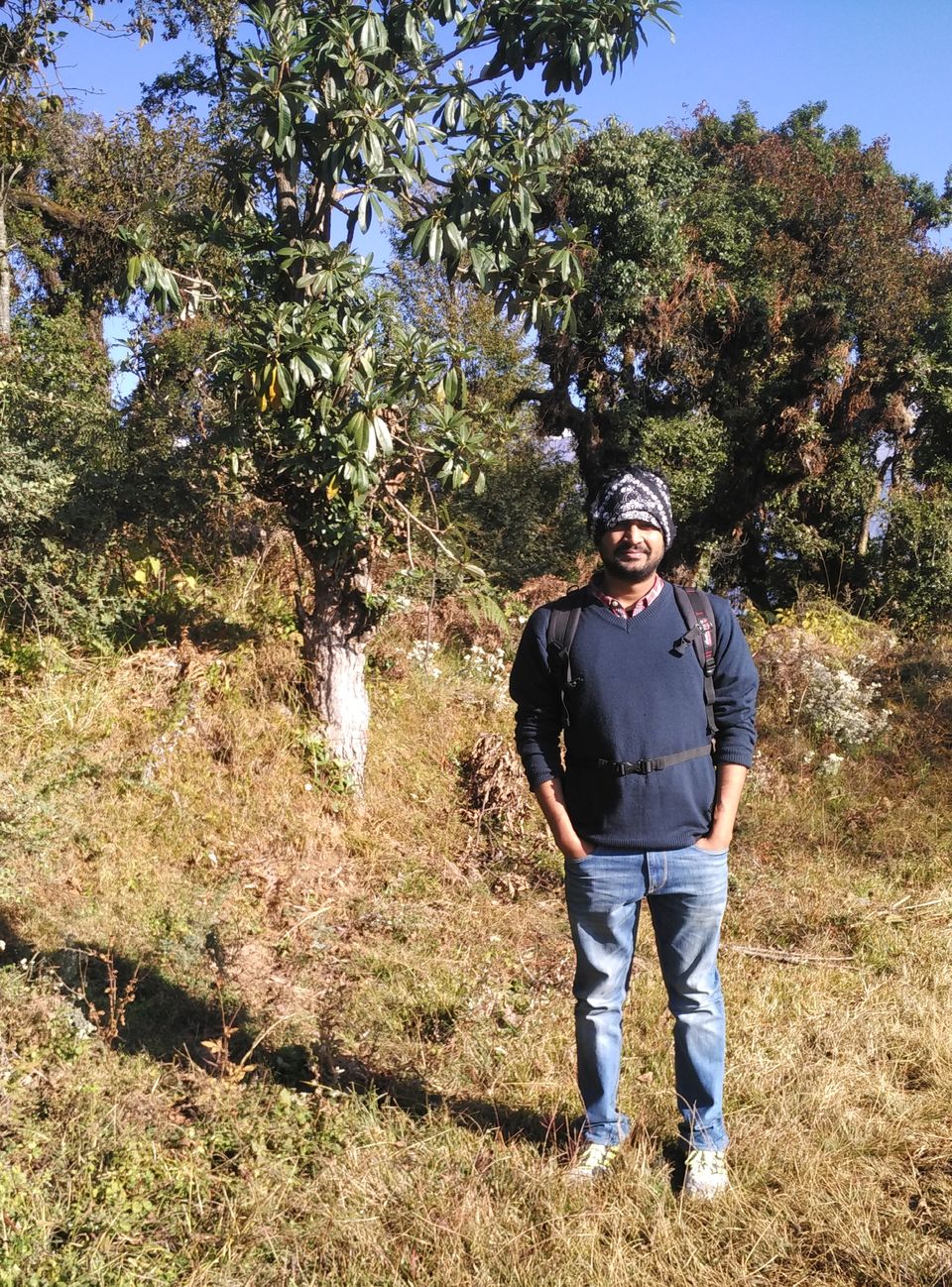 After breakfast, we left the for the 14km trek to Chopta with a guide.

(Note: I would advise for a guide since the trek is complicated with a lot of confusing trails. The guide can be hired at the lake itself.)

Some members of the guy group decided to leave late and we were to mark the way for them with tissue paper. The trail was long but kept shifting from rocky terrain to dense forests, meadows and downhill towards a stream.

It took us about 5 hours to reach Chopta which was but a very small and beautiful town covered with glorious mountains on one side.

It was evening and the rest of the trekkers had not yet reached. (Our tissue rolls were limited and had finished just before the last hour of the trek.)

Due to unavailability of any network, no contact could be made. The sky was getting darker when we decided to go back and search them with the help of a local, calling out names and signalling with torches in the dense quiet forest.'

We finally found them taking rest in an abandoned hut which was a big relief and the end of an adventurous and tiring day.

It was Diwali and no better way to have celebrated it in the absolute noise and pollution free town of Chopta with a handful of people. 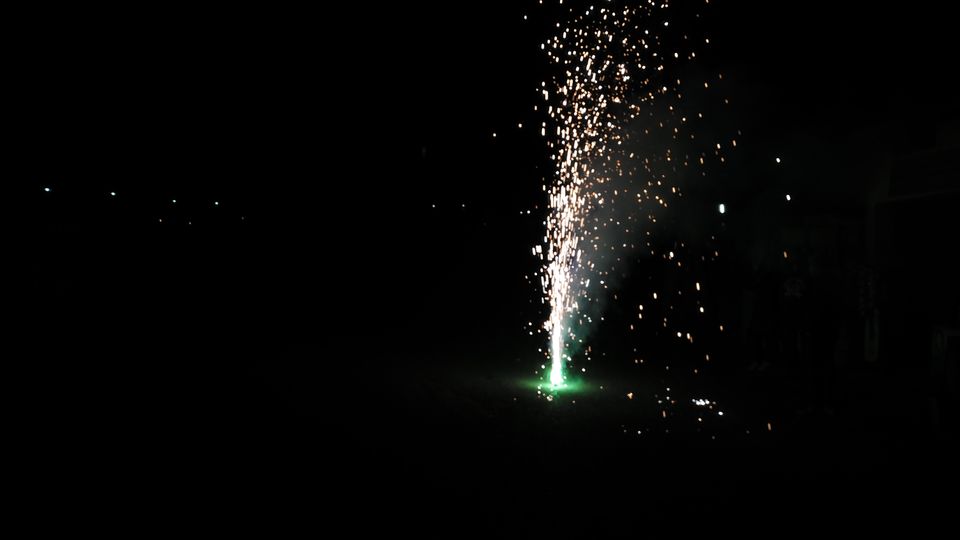 If you want the charming and surreal views of the mountains, the best time to reach the top is either at sunrise or sunset. I slept by 9 to start the trek early in the morning. It was dark with temperature below 0 degree Celsius. There was absolute stillness on the way and the sky looked bright filled with stars.

Although I started the trek alone, it was agreed with the others (the Dehradun group and the couple from Hyderabad) to start the trek early and reach the summit by dawn. So although i was trekking alone, I knew that there were others on the trek with me. That gave me some kind of comfort.

Tungnath (the highest Shiva temple) is 2 kms from Chopta and the trail is steep throughout. A 1.5 km trek from Tungnath would take you to Chandrashila peak where you would get a 360 degree view of the mountains of lower Himalayas.

Grand mountains all around with clear skies at about 4,000m(13,000 ft.) is a delight for a traveller. The view is one to savour for the rest of your life.

It will stay with you forever. 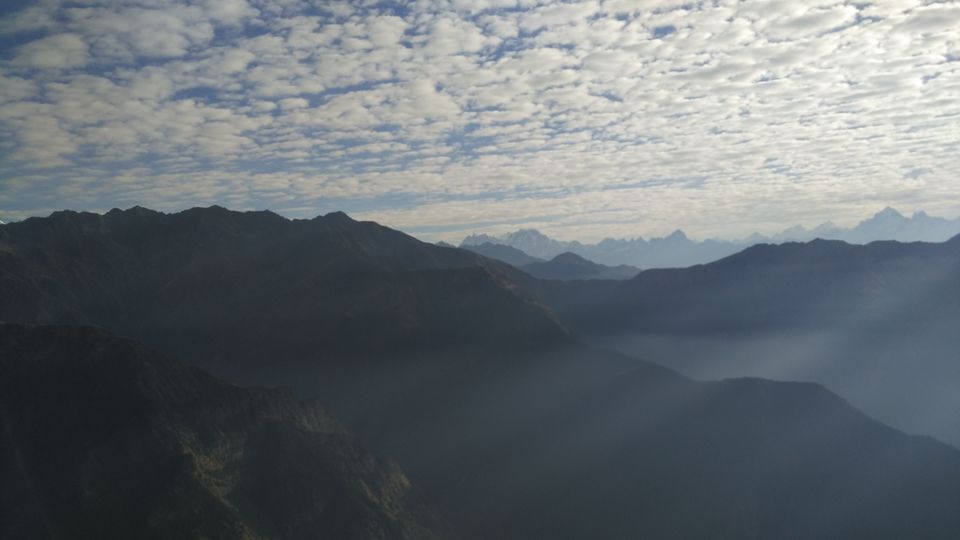 Know more about my solo treks and myself. Connect with me :