One who gets ready every morning- trip to East Sikkim

Eyes opened with a knock from Sangi bhai on the door, who was a guide for the day. 3.40 in the morning we started our day 2 with a cup of hot Darjeeling tea. Well,having Darjeeling tea in Sikkim is pretty exciting.

Rain had stopped but it was pitch dark outside, we were just hoping that we will be able to see everything clear as we ascend.

The route which we travelled in that cloudy dark hour, is called the hair pin loops. 305 loops in the route to travel up from Phadamchen to Zuluk. A very scary ride of 52 km which we crossed in around 1.5 hours or little more. The roads were very broken and the darkness and clouds were completely blindening. Still as we climbed around 30 kilometre, cloud was cleared from the road and it was dawn already. In that faint bluish light of the hour, when the sun meets the night, I first saw the ocean of clouds beside me. The same kind of clouds we see from the aeroplane window,was right beside the window of my car.

We kept driving and the sky was clearing up,and the beauty started approaching… As it rained heavily the previous night, it snowed in the top of the mountain. Snowflakes were decorated on the leaves,the trees and grasses all over and it was looking like a piece of art by mother nature.

Soon we reached to the top of the mountain and got down from the car, I could not stop tears rolling down from my eyes. The sight that was waiting at the end of that bumpy, dark,scary road felt like literally heaven.  Probably that is how every bad thing every struggle awaits with a beautiful ending, an award that is given to only those who take up the challenge.

We were standing at the top of the mountain at Zuluk, there was a bed of clouds, a carpet of fine cotton balls and in the end of the carpet the sun was approaching with all his glory and in the exact opposite side, it was the mighty Kanchenjunga standing tall like a guardian. A massive being, to whom all ego collapses, a stable friend you can surrender yourself to.

The arrangements of the peaks look like a sleeping Buddha.

And one by one peaks were getting lightened up, as the reddish rays of the sun was colouring them up. The temperature there was -2°c and it was extremely windy. But it was not the cold that stoned me, it was the beauty which cannot be compared to anything I have ever seen or felt in my life.

In sometime the entire range of Kanchenjunga turned bright golden yellow. It is like a celebration nature does every morning, without any attention of anyone, without letting anyone know…

As we filled our hearts with the beauty of one of the best sunrises I have ever experienced, we ascended to the Thambi viewpoint, 7 km down from the sunrise point of Zuluk. And by 8a.m. it was a bright sunny morning. Clouds started disappearing and from the viewpoint we were able to see the routes of hair pin loops. Somethings look really beautiful only when they are far away. the roads which were so scary in the darkness of night, looked like a portrait in the bright sunny morning.

The next hop was Baba Harbhajan ji mandir. It was the actual bunker of the Indian soldier who served the nation even after death. At 13500 ft from sea level temperature was 3°c.

With a drive of 25 km we came down to the Tsomgo lake, temperature was growing and it was less windy. The crystal clear still water of the lake calms down the soul, after long drives through ups and downs of the mountains. First we witnessed the elephant shaped lake and then the Tsomgo lake.

A beautiful arrangement of the sun, the mountains, clouds and blue water is such a comforter for the eyes.

As we drove down to Gangtok and reached the beautifully man-made MG marg, which happened to be one of the most favourite places of mine for years, this time the busyness of that road, the giggles and noise of even footsteps were taking me back to the night where even the raindrops were been heard, where the wind did the talking.

As we will return to our usual lives tomorrow and keep ourselves caged infront of the 16 inch screen, The mighty Kanchenjunga will still deck up every morning, the sun will still glow at its best, and the clouds will equally do the madness of running from here and there. And I believe that is enough motivation to feel happy every morning, to start every morning with our best selves and do it all only for ourselves without any need of being noticed. 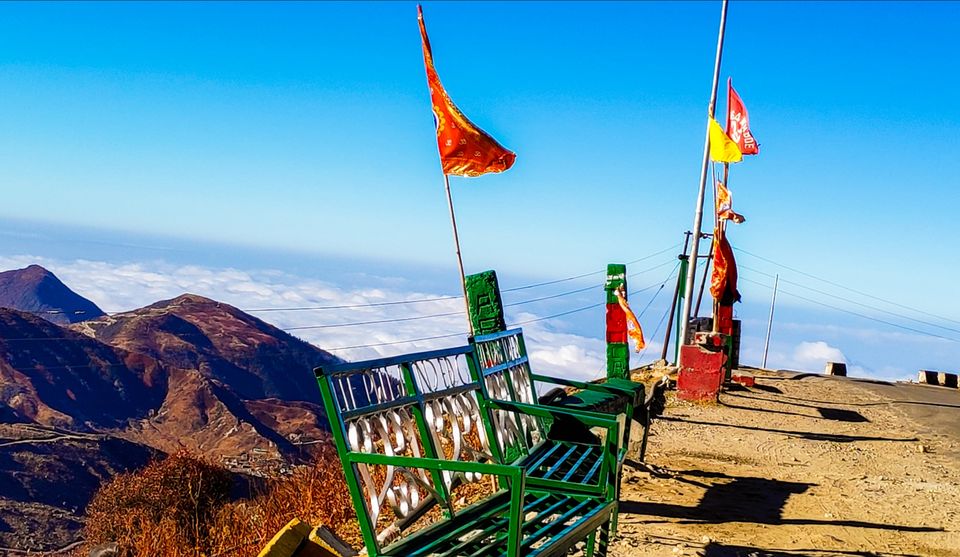 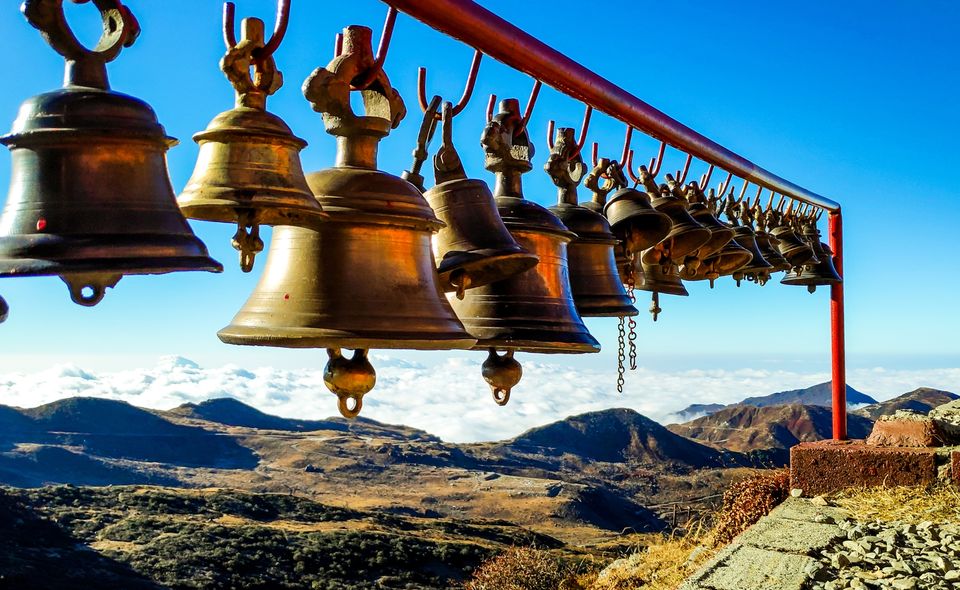 A selfie with the mighty kanchanjangha 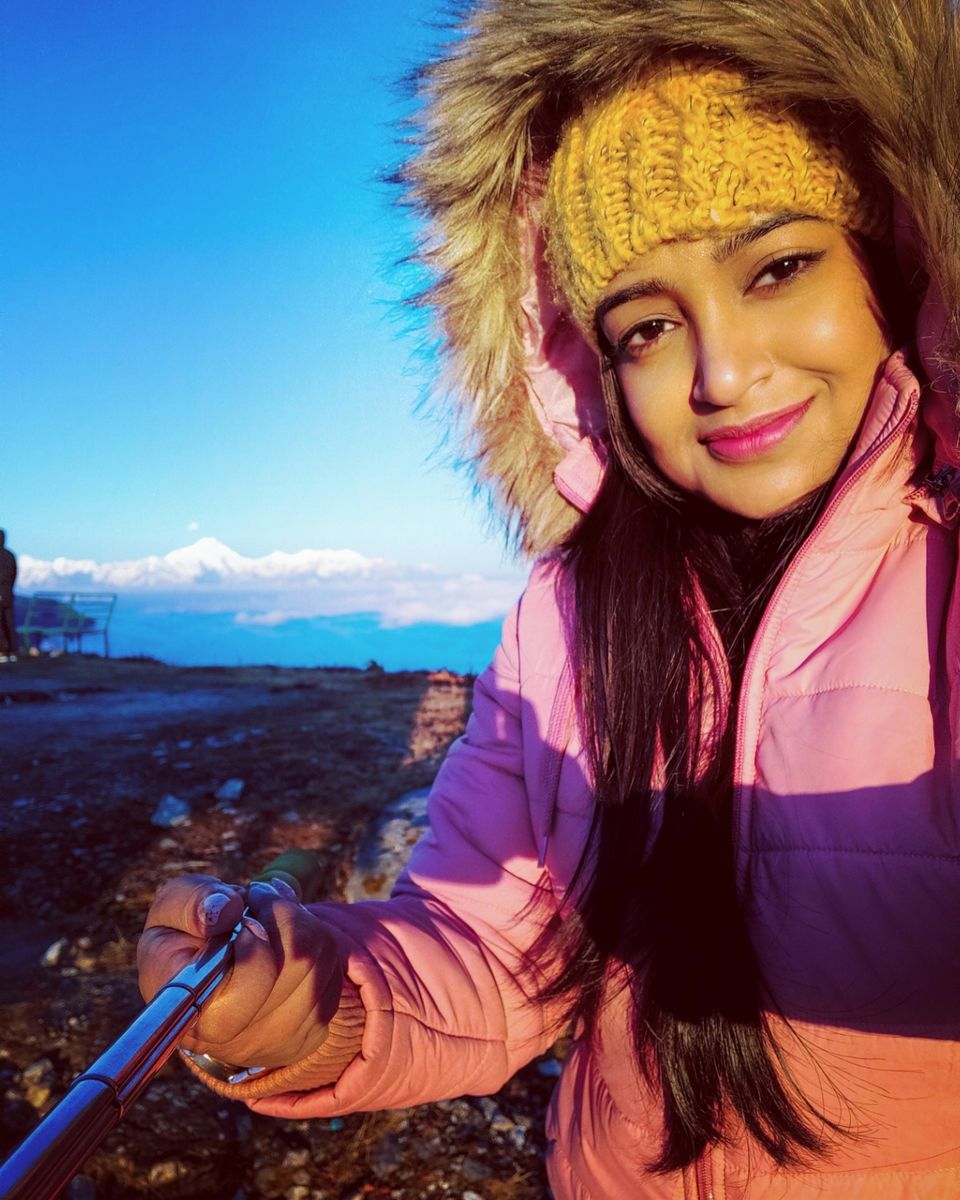 How the range starts getting the colour 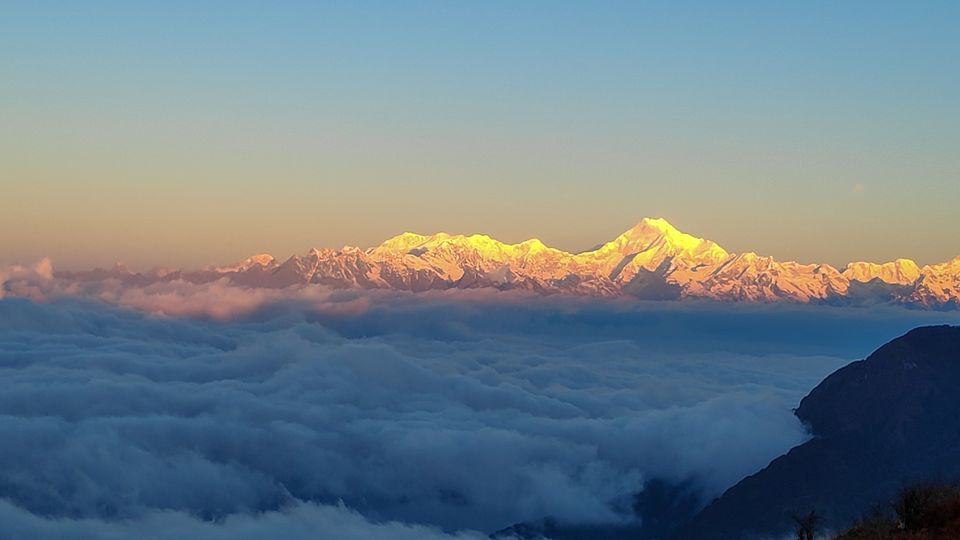 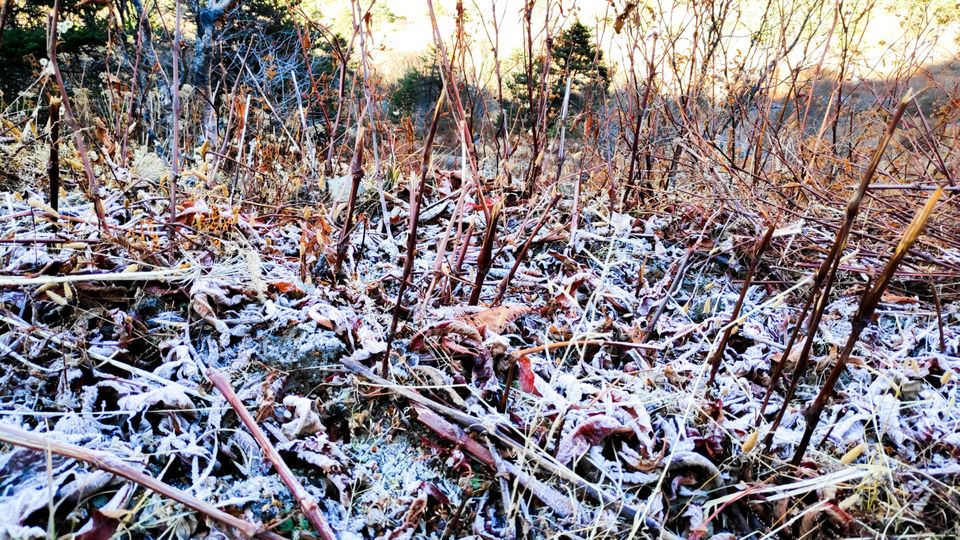 When the first beam of the sun touches the peaks 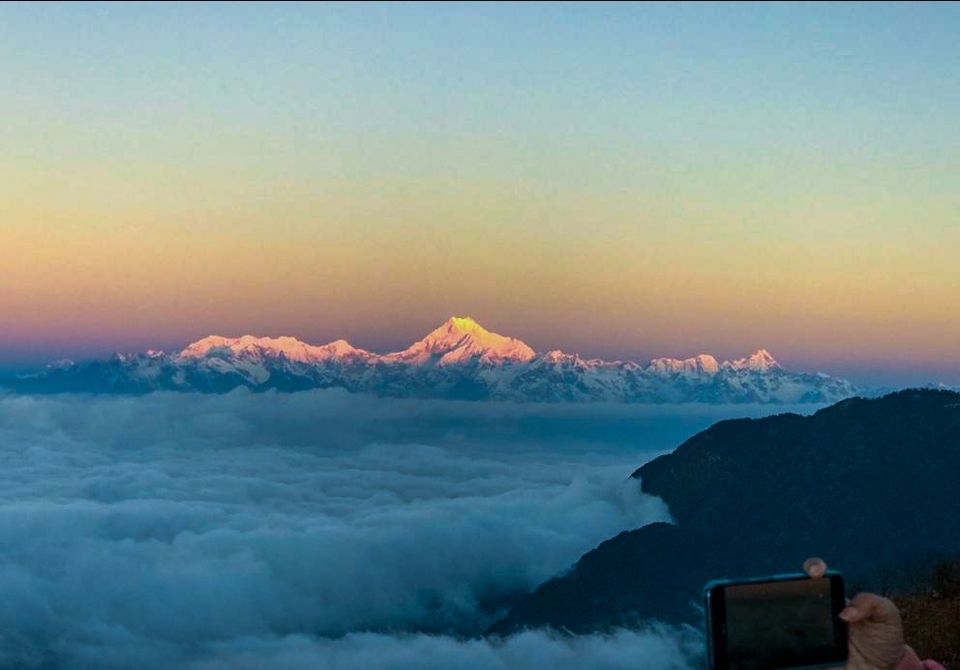 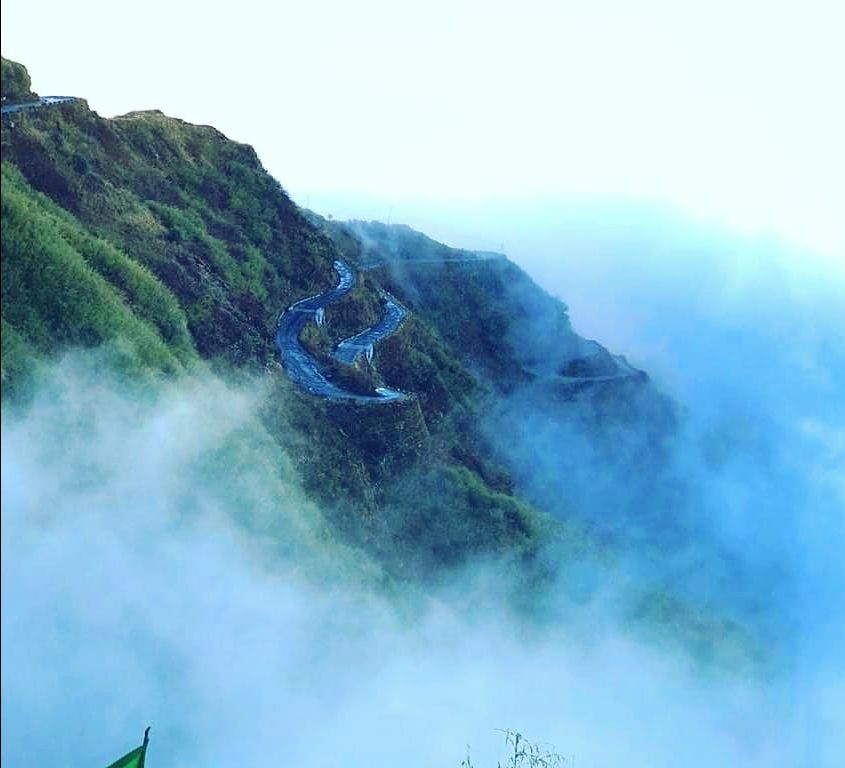 The ocean of clouds 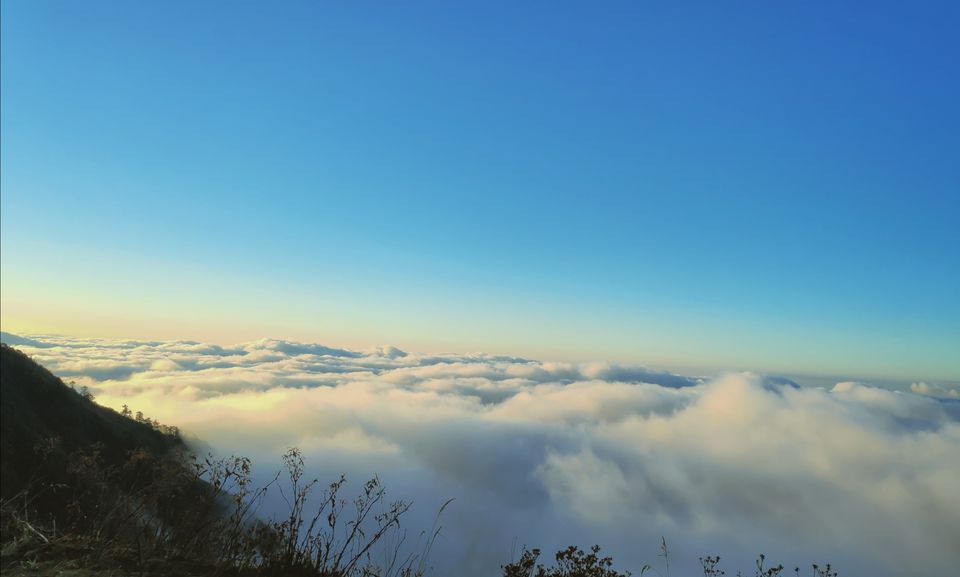 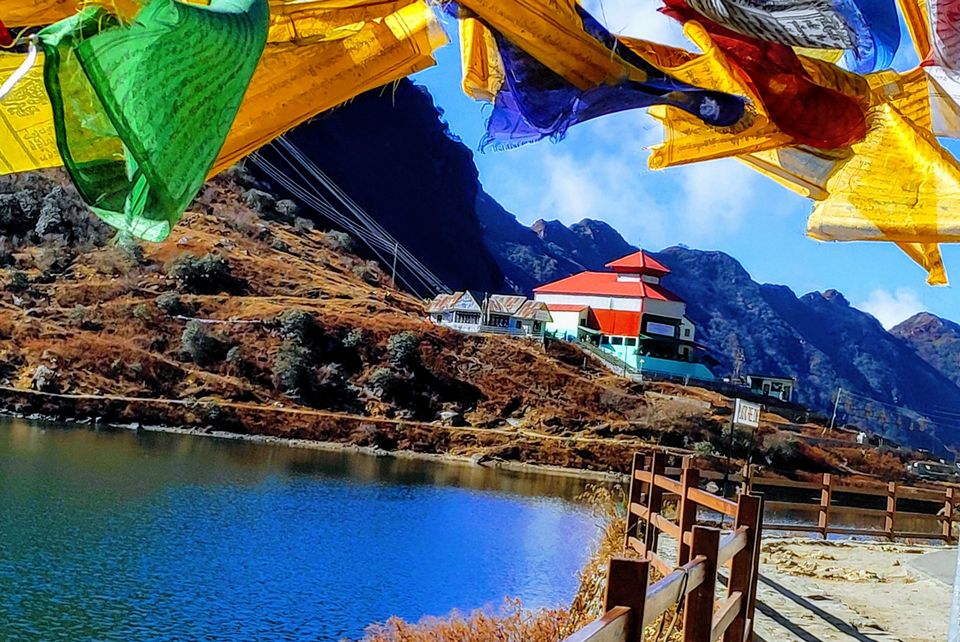 I was born in a small town near Darjeeling. Till some years, when mansions were not built, Kanchanjungha was visible from our little porch on clear mornings. It wasn’t very near, but that faint outline of the peaks on blue firmament used to fill my young heart with absolute bliss.

This time I didn’t have much time in hand, yet chose to go for a small trip to the mountains. Days were limited but the plan was very ambitious. The idea was to cover the silk route of East Sikkim.

The silk route is a historic trade route used from the second century BC 14th century AD that went from China to the Mediterranean. The silk route is so named because of the popularity of trading silk during that period. The valuable fabric originated in China, which initially had a Monopoly on its silk production until the secrets of its creation spread. The silk route traversed China, India, Persia, Arabia, Greece and Italy. In addition to silk the route facilitate the trade of other fabrics, spices, grains, fruits and vegetables, animal hides, woods and other items of value.

As we chose to drive through this area, we decided to reach till Zuluk and Thambi view point and return through Gangtok. The idea was to start early as evening comes faster in mountains, so we started 8 in the morning and drove till Rongli basepoint.

Rongli is a small village of Sikkim, which is also a military base camp area where you need to reach within 10 a.m. to 4 p.m. post that permissions to proceed further in Sikkim can not be granted.

After submitting voter ID proof and one copy picture of each traveller we were given the permissions to cross the checkpoints. Necessary to mention here that، the vehicle should be driven either by the owner or at least the owner has to be present in the car.

We had our lunch at Rongpo, simple vegetarian food and started our journey toward the mountain again. Generally the roads to mountains are beautiful, accompanied by rivers or small streamlines throughout, but this was not anything like that. The roads were damaged due to landslides, new roads were in progress, thus it was all dusty and bumpy.

The first place we decided to halt at was Phadamchin. We reached the place around 4:00 in the evening and it already started getting dark. By 5:00 p.m. it was pitch dark and all foggy. sorry, that was not fog, those were the clouds.

Even though driving through clouds was difficult but that feel of mystery was very thrilling. We randomly searched for a homestay out of many in that area, a small cozy one, cost for a night was 800/person along with food and snacks. What a steal deal !!

It started raining soon after we got into the homestay. Rain in the mountains are different. It is like a teenager whimsical lover, whose love doesn’t follow any rule, scattered and irregular.

The place was absolutely out of network area, so we were sent to an enforced isolation. As we live in a very fast paced society, into a lot of noise, dead silence away from all this hustle-bustle, felt very unusual initially. Silence like you can feel deep into the sea or in the deepest of your meditations.. there every breath counts, every moment feels longer than it is…or probably that is how long moments are and that is how they are supposed to be valued… we’re just used to wasting them for long!

Arranging food is difficult there,so of course you cannot expect any luxury but like any other hill area, sikkimese were also very cordial. They cooked fresh chicken curry, potato fry and rice for us in dinner and that steaming hot food was probably the best meal I have tasted in long. By the time we were having dinner it started drizzling outside again, pitter patter of rain joined us for the dinner.

We went to bed early, around 9:00 p.m. which is considered as kinda late night in mountains and by that time it was raining cats and dogs already. Cold was increasing exponentially and when it rains at night in the mountains and you have a full satisfied stomach, trust me, going to sleep is the best choice to make.

The beauty that brings us here again and again 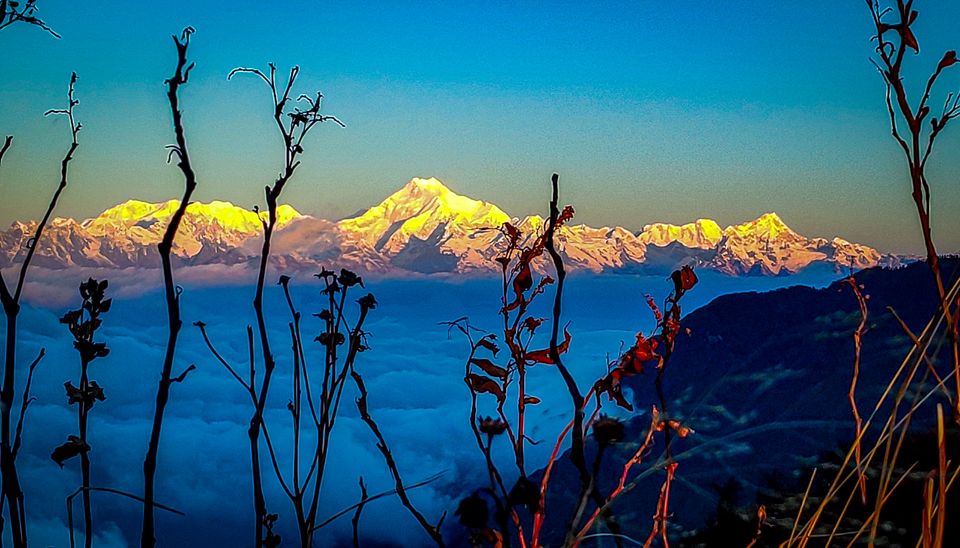 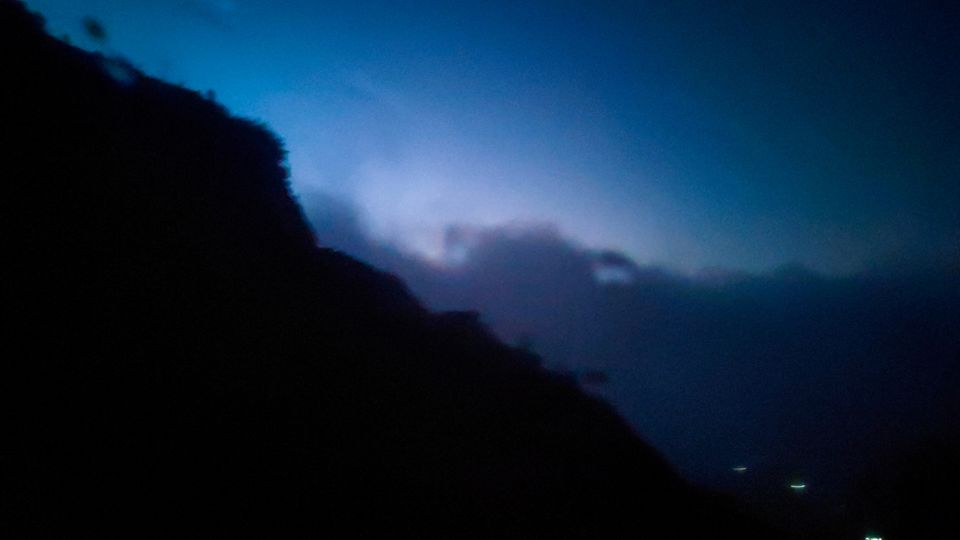 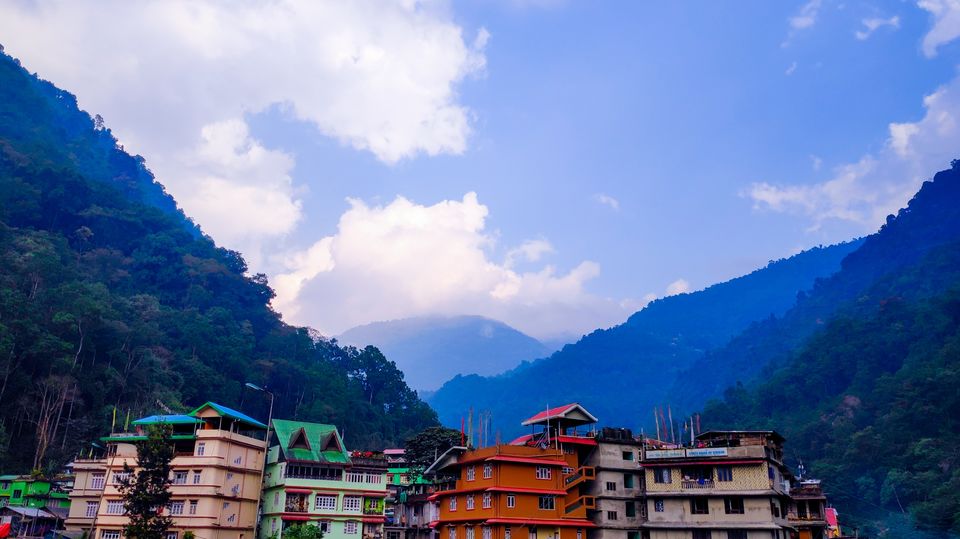