Big America With Boca and Arlo

On October 14, 2011, I set out on a one-week, cross-country road trip from Monterey, California to New Mexico, with my lifelong friend Boca, taking in and reporting on America along the way. It’s a journey that’s been made many times before, perhaps even by you. But we digitally documented the journey in real time so that we could share this experience with you. We invite you to come with us, from the breathtaking Pacific coast to the white sand resort of New Mexico. Journey with us through deserts, canyons, cities, random oddities of Americana and the natural beauty of the North American interior. Follow us, every step of the way.

The first day of our cross-country road trip started with high hopes and enthusiasm along Monterey’s verdant Pacific coast. It ended in fatigue in the Mojave’s brown and bone-dry desert expanses. Boca, who’s doing all the driving on the trip, didn’t make it onto the Monterey Peninsula until around 3am. Although his flight from Florida landed on time – just before 10pm in San Jose – a fatal highway accident kept his shuttle transfer in gridlock for hours on end. I waited up for him, catching up on writing and trip planning, and we both ended up with less than desired sleep before our first full day of driving.

Today was also focused on energy because of what the California landscape had to offer us. Driving along back-country roads through California’s central valleys, we passed through a town called Lost Hills, which seemed to be nothing other than one large oil field. Oil rigs littered the landscape as far as the eye could see, north and south across the pancake-flat valley floor. It was a harsh and uninviting landscape, but what seemed most odd about was its proximity to rich agricultural lands. The oil fields were surrounded by almond groves and dairy farms, which gave way in each direction to other crops such as cotton, leafy greens and vineyards full of wine grapes. In some areas, mounds of freshly harvested almonds seemed literally piled up alongside oil wells – something to think about next time you bite into a plate of almond-crusted halibut.

As dramatic as the oil fields were, so was California’s next big display of energy. Just east of Bakersfield, on the mountain pass into the Mojave Desert, lies hills littered in wind turbines. Thousands of them dot the landscape, twirling away in the breeze while providing a hopefully cleaner alternative to the State’s energy needs. We were joined on Twitter at the time by Tom Gray, who informed us that the two distinct types of wind turbine we were seeing represented varying stages of technology. The smaller, meshed looking turbines have been in place since the 80′s, while the larger, more cost effective jumbo-size turbines are the industry standard today. Somewhat ironically, the contrast between these two forms of energy was reflected in the environmental health of the State’s ecosystems we passed through. Whereas the clear and sunny day on the Monterey Bay revealed forest-covered hills, rich marine life and unpolluted skies, the air above and around Bakersfield was the exact opposite. A thick smog hung over that city like an evil gloom, and the entire ride through smelled of fumes and toxins. And then in the end we escaped that foul air, into the crisp, dry and mystically beautiful wilderness expanses of the Mojave, where we sleep tonight. Resting peacefully, looking forward to more of Big America tomorrow.

Today was a day of crossing deserts and state lines. Parched, dry landscapes and obscure Americana dominated our voyage east on this leg of our cross-country journey. Escaping California offered little relief in terms of change of barren landscapes, although the appearance of giant solar farms was a welcome first. From the Mojave to the Hoover Dam, and finally the Grand Canyon, some of the south-westernmost stretches of the United States are as filled with historic iconography as they are beautiful expanses of desert wilderness.

We awoke before dawn in Barstow, California. I was restless with the presence of the Mojave wilderness all around us and needed to set out early and fast into her dry expanses. Boca and I choose Historic Route 66 as our path, and journeyed through space and time with near constant reminders of both American and planetary history all around us. We passed through ghost towns of the 1800s, abandoned highways, boom towns that went bust, and through geologic features that pre-date the dinosaurs. We witnessed fields of black lava rubble, ancient Joshua trees within high altitude deserts, scattered cacti, and a watery oasis by the name of Lake Mead, of which our own kind has caused to flood the lower end of the ever Grand Canyon.

Moving on to Arizona, we stopped in Kingman, yet another former Route 66 town that has seen better days.

It was dark when we arrived at the Grand Canyon, but that did not inhibit the joy and giddiness of winding down along the rim of such a magnificent hole in the Earth. A mule deer wished us goodnight, as we now wish to you.

Sure-footed, graceful and family-oriented, the bighorn mountain sheep (Ovis canadensisis) is an iconic image of the American west. Associated with durability and ruggedness, the sheep are nonetheless not always easy to observe in the wild. Regular residents of the Grand Canyon, the sheep are only infrequently seen by park staff and seldom so by visitors. So, when I walked out of the Kachina Lodge on the Canyon’s South Rim Sunday morning and saw a large sheep, I was elated. The animal was not just in plain sight, but was actually standing on the Rim Trail’s stone wall, basking in the morning sunlight.

Boca and I had stayed at this rim lodge the night before and were thus able to spend a good deal of time with the sheep and her family that morning. A herd of roughly a dozen or more made there way from east to west just below the Rim Trail. They would stop to sun, feed, rest and socialize along the way, always precariously balanced between solid rock and a harrowing drop to the Canyon floor. One large ram led the herd and showed nearly constant interest in the hind quarters of a particular, but seemingly unintrested ewe. The other females led the young, consisting of four or five mid-sized juveniles and one small kid that seemed newborn, exhausted and bewildered with life on the edge of the Canyon. It was a beautiful fall morning well spent in the company of the Canyon wall’s wild masters.

This is what happened to me. I first visited White Sands in 2006 with my father on the drive west that brought me to California in the first place. I have wanted to return ever since. To walk barefoot on these cotton dunes, and to take the time of day there to simply breath. To be. And also, as a naturalist, to hopefully observe some it’s unique and cryptic desert fauna. But even the best laid plans can falter.

Boca and I had intended to camp at White Sands National Monument, and actually sleep on the dunes themselves beneath a starry desert sky. The night prior we explored a prehistoric forest where dinosaurs once roamed, the rocky remains of the Petrified Forest National Park strewn haphazardly across the Painted Desert.

After overnighting in a small town called Eagar in Arizona’s White Mountains, we decided to drive south through Gila National Forest. And this was our mistake. The roads were narrow, winding, and poorly marked. We took a wrong turn and ended up on a half day detour, lost amongst the high altitude pine lands of Apache National Forest.

We didn’t make it to White Sands until just before sunset. We were refused a camping permit. We were too late. But we were also right on time. In time for what nature had intended all along. A spectacular light show for our benefit. Alone and desperately tiny on the mammoth dunescape, we witnessed our solar system’s fiery center dip beneath jagged dry hills, casting a Santa Fe water color mural across the sky and dunes.

We hope you enjoy reading about what we saw. But what we felt can only be experienced firsthand.

I love everything about Monterey except the fog and freezing cold water. Why can't upwelling bring up warm, tropical waters and create a SoCal climate here? Otherwise, this is the perfect little historic seaside town. 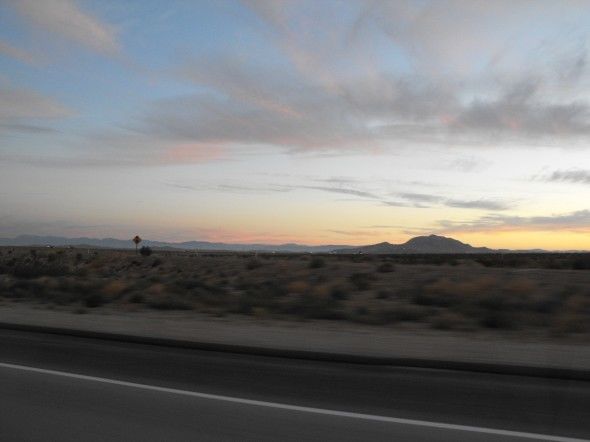 Great little desert town, although I don't know that there's a lot to do here other than sleep before getting up to explore the Mojave! 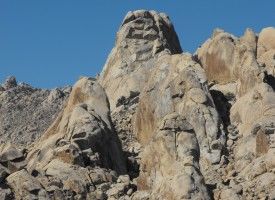 Moving on to Arizona, we stopped in Kingman, yet another former Route 66 town that has seen better days. The people there are into their muscle cars, their military and their American flags. We walked through the old town amidst classic cars and their aging enthusiasts. We stopped in for dinner at the Redneck BBQ, where a live country musician serenaded us to a basket of brisket and the only place I’ve ever witnessed to actually replace “french fries” with “freedom fries” on their menu. It was dark when we arrived at the Grand Canyon, but that did not inhibit the joy and giddiness of winding down along the rim of such a magnificent hole in the Earth. 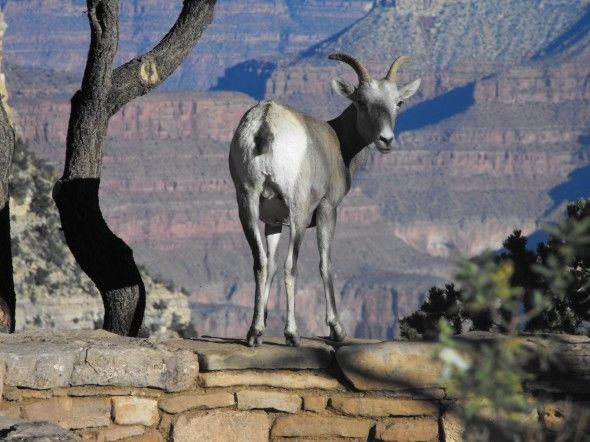 This is one of the most remarkable geophysical phenomena I've ever laid eyes on, in any country of the world. The sand is soft, cool, whiter than snow and rolls on as far as the eye can see. Corralled in a ring of ragged desert mountains, there is something distinctly spiritual about watching the sunset over the San Andres Mountains, the last rays of which cast a pink hue to the silky rolling dunes spread out in all directions. 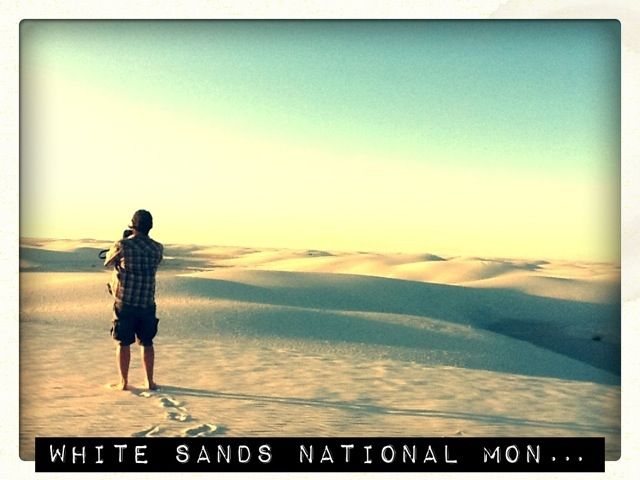