Why Indonesia Pissed Me Off

I recently came back from a brief but totally awesome vacation from Ko Samui, and in the coming weeks I will be sure to give you all the dope on it. While i had an absolutely fantastic time there, my near perfect vacation was almost ruined by Indonesia. At this point you are probably thinking what does Indonesia have to do with my Ko Samui trip anyway, it's not like Ko Samui is a part of Indonesia. Well, Indonesia pissed me off, a lot and here's why.

I had had 2 fantastic days at Ko Samui and was eagerly looking forward to my flight to Bangkok because I had planned to do some hardcore shopping and was looking forward to it before I flew back to India in another 2 days time. All packed up, I checked out of the hotel and reached the airport to be informed that the flight was rescheduled to 5 pm instead of 10 am. A little upset I decided to while away some more time at Ko Samui and made a beeline for the airport check in at 4.30 pm again only to be told that all flights were cancelled for the day due to poor visibility caused by a haze, courtesy Indonesia. To be honest the whole city was kind of covered in a haze and we couldn't even see the clouds nor the sea very clearly, so I knew there was some valid reason for the cancellation, but that didn't stop me from being pissed off. Even during the previous 2 days, the sky did seem to have some sort of haziness to it and I remember that before I had left for Samui, back home I had read a little about something to do with forest fires in Indonesia that had caused haze conditions in its neighbouring countries. Obviously I hadn’t thought that it was a big deal and that I would somehow be directly affected by it.

So I was extremely pissed off that I had to miss my flight and lose an entire day that I would have otherwise spent at Platinum Fashion Mall in Bangkok shopping to my heart’s content. I was really really angry. I mean it wasn’t like I was going to go back to Bangkok anytime soon again was I?!

So as I was coping with this unforeseen "disaster" that almost ruined my near perfect vacation, that's when it hit me…if missing my flight by a day and not being able to shop for clothes that I would probably wear a couple of times pissed me off so much, imagine how angry should the innocent people and animals who were the direct recipients of this irresponsible action be? How their lives were altering for the worse for no fault of theirs, and how the world was just silently observing. And this is why Indonesia pissed me off.

You probably still have no idea what I am talking about because how could you? No major news outlets are covering what is possibly one of the biggest hazards of our time, and no prizes for guessing who has caused it! Sometimes I feel being the most superior species we humans have caused more harm with our actions than anything else.

Slash and burn farming is something that has been given a condemned status once mankind understood how hazardous it is, but despite this there are many cases of this still happening and the latest one has now cleared more forest and peat land than the size of New Jersey. Yes, 21,000 square kilometers of land in Indonesia has been deliberately “cleared” to make way for palm oil and pulp and paper industries. This is not something that just happened yesterday, this has been on since over a few months now and what started as slash and burn has now turned into an uncontrollable fire resulting in loss of habitat for wildlife, over 19 human deaths in Indonesia due to the toxic atmosphere and affecting millions of others in it’s neighbouring countries of Singapore, Thailand, Malaysia and Philippines. I probably wouldn’t even know all this if I hadn’t been affected by this personally. Thankfully all that happened with me was my flight being cancelled.

What about the endangered Orangutans in Borneo who have lost their homes and are now suffering from respiratory ailments and dying? (Read). 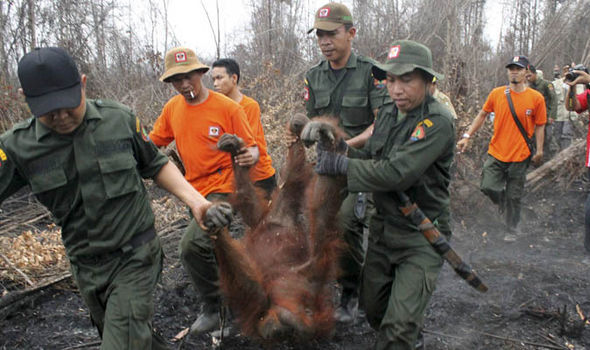 What about the greenhouse gases this fire has released in just 2 months that exceeds the amount of fossil fuels burnt by Germany annually? (Read) 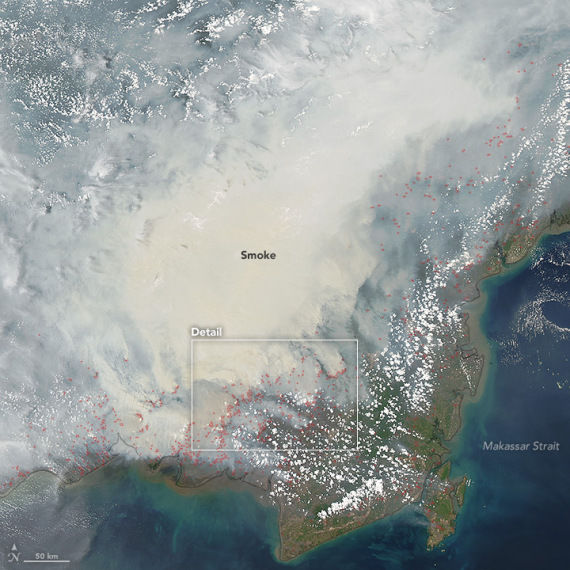 What about the impending animal-human conflict that will arise due to this? (Read)

And what about a lot of other inconvenience the fires have inflicted on the planet.

Amidst all of this, what surprises me is that why is the rest of the world quiet? World leaders are always talking of climate change and sustainable development, so what happened now? Why are we quiet when this is the time for the world to come together and realize that things happening in another country can directly affect them as well. Why haven’t we shrugged off our man-made boundaries and tried to control these fires? And the most surprising off all, why has media been so shy of covering it? This article by Huffington Post states that these fires have been raging since August, so why is it that only on the 2nd of November we are seeing a full fledged coverage? Maybe Huffington Post and other outlets did carry a coverage as early as August as well, and if they did, then sadly it hasn’t reached me, and I am guessing it hasn’t reached a lot of other people either.

I know I can’t directly do anything to better the situation that has ravaged most of South East Asia by now, but I am hoping to spread some awareness about the situation through this post, get more people to read and know the magnitude of this crisis.

This isn’t something that I usually write about, but when you travel you experience things; good and bad, and sometimes you have to write about the bad which goes much more beyond a flight delay or a meal at a restaurant not being upto the mark.

So I am hoping if more people are aware all over the world, if more mainstream media outlets start giving this crisis attention, maybe then we as countries can be pressurized into coming together to salvage this and ensure that such incidents don’t ever get repeated again.