So, What's Happening In Antarctica?

There are lots of crazy cool vehicles being driven around McMurdo and parts of Antarctica at large. Pisten Bulleys, Deltas, snowmobiles, Haglunds, big vans jacked up a huge tires… It’s pretty much a little boys dream. I never dreamed of driving such big and interesting vehicles as a kid, but this year I’ve gotten to a bit and the fun is not wasted on me. I’m a back-up shuttle driver this season and sometimes I get to drive onto the sea ice and out to the airfeild where planes land and people are getting their work on. I pick up said workers and take them to and from town. Or sometimes I pick them up from happy camper school - things like that. It’s nice to get out of the office and literally off the island too. For some people driving this stuff is NBD and they do it every day, but for me it’s still kind of exciting. 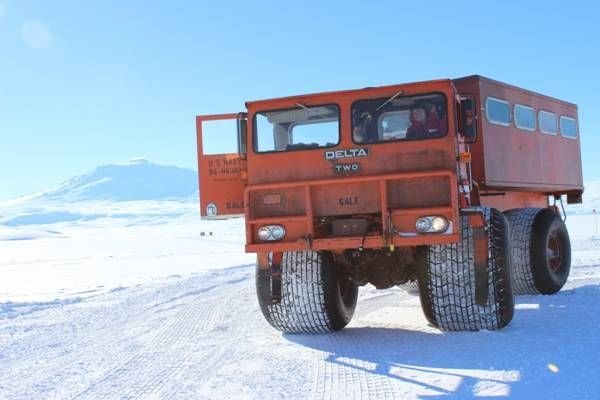 I wonder if they’ll ever find it. Ha. Here’s a glimpse of what some of the divers in Antarctica see under the frozen surfaces we walk, work, drive and play on top of. These people are expert divers and often also grantees, who have been awarded grants from the National Science Foundation for specific scientific endeavours. It’s a magical and alien world under the ice; I can’t even imagine what it would be like to dive in those conditions, but I’m pretty sure I’ll stick to the warmer waters of SE Asia and the like. 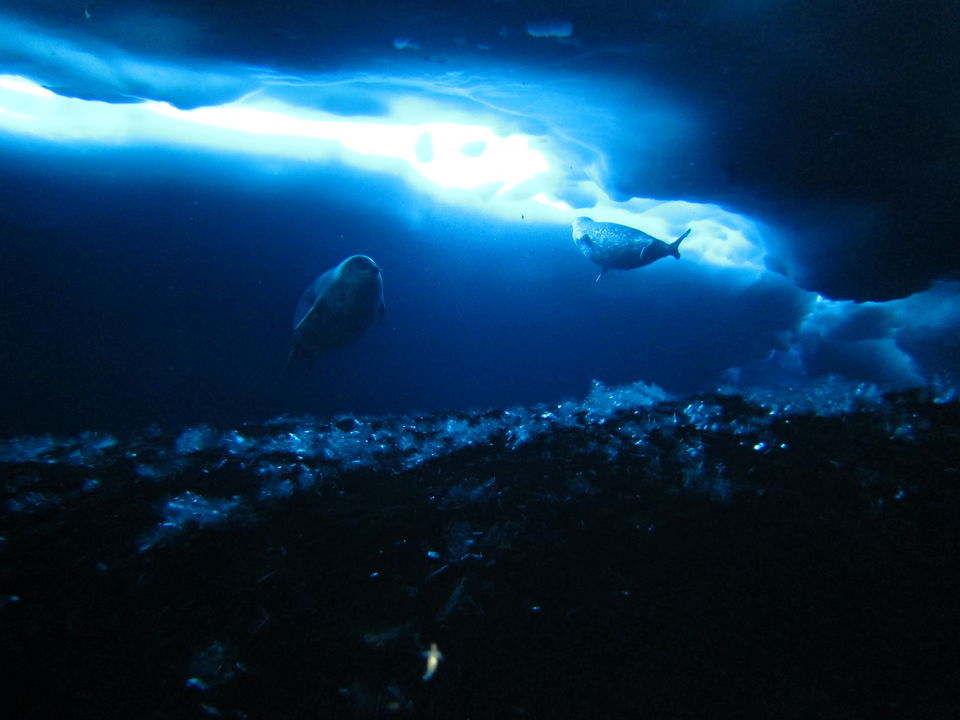 Polar Bears Do Not Live In Antarctica. Someone put this together for MAAG (McMurdo Alternative Art Gallery), which is an annual event where residents are encouraged to enter art of projects of all kinds. Some were quite impressive. This one was particularly funny and silly, because as you may or may not know – there are NO POLAR BEARS IN ANTARCTICA. Never have been. But you’d be surprised how often we all get asked about them outside of this place. This projects was one woman’s interpretation of what her friends and family back home think it’s like here. 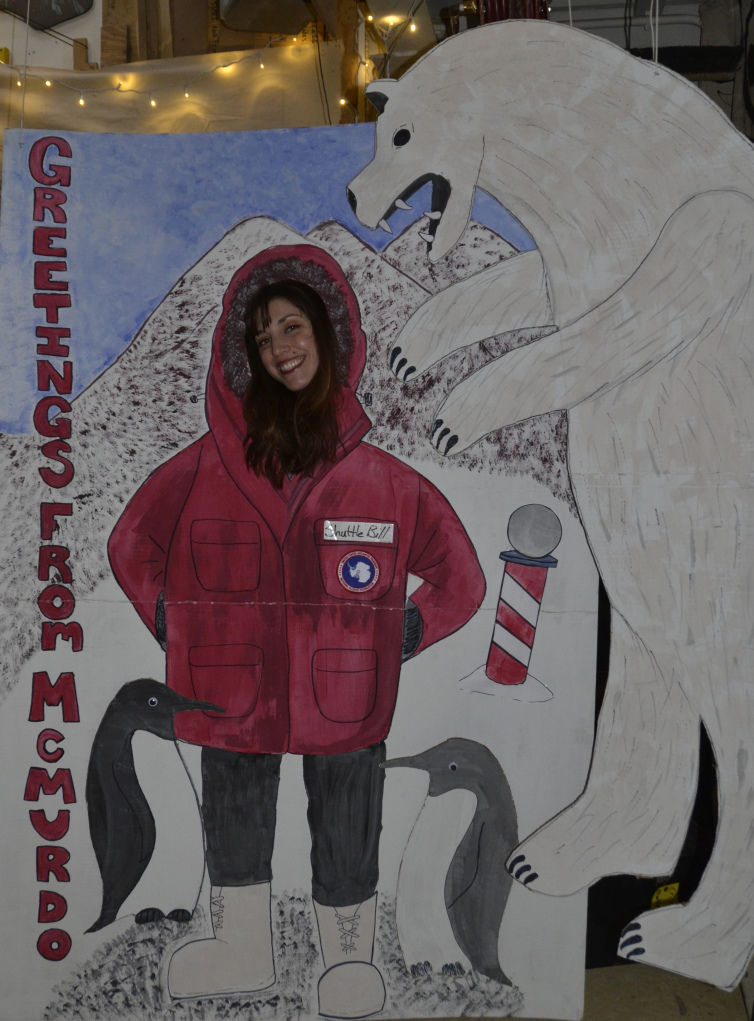 When you work the night shift in a place that has 24 hours of sunlight, you find yourself doing some activities that would otherwise be considered odd for what time of day it is. Like going for a hike at 2:00 in the morning. Recently, on our night off, Jeff and I hiked to Castle Rock. It was a mostly sunny and warm night; the trail conditions ranged from icy, to slushy, to the kind of lacy ice that collapses under foot and drops you down a foot to volcanic permafrost. Along the trail there are a couple small round structures called apples that are placed there should hikers find themselves in an unfortunate situation and need shelter – you’ll be able to see them in the slideshow below. They are filled with supplies such as sleeping bags and pads, water, snacks, romance novels and a funny trail log. The rock itself is along a mountain ridge and is surrounded by miles of rolling, white hills that glide down seamlessly to frozen ocean – both as smooth as frozen frosting whipped to perfection by years of icy winds. Sitting up on the rock clouds hovered and rolled through us and off toward the ice shelf. The landscape is surreal, ethereal and impossible to catch in a photograph. 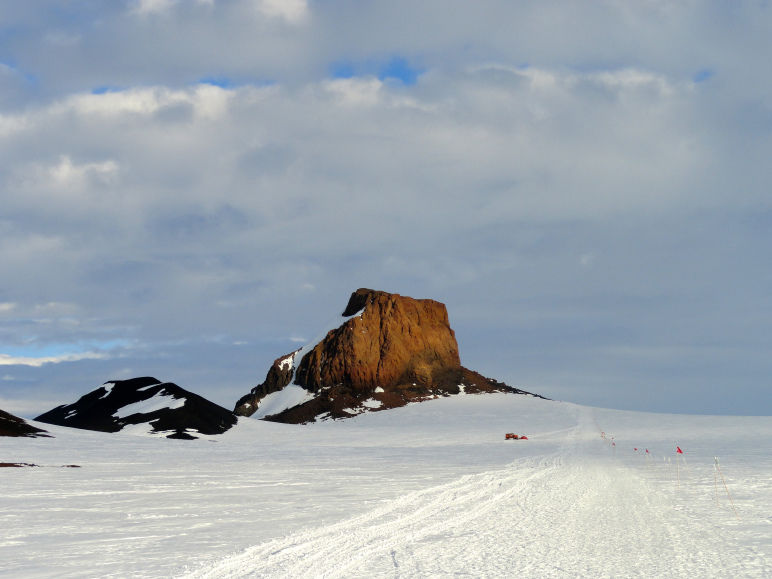 I thought I’d also take this opportunity to tell you about a little treat called “Day-bar.” At any given point in the season there are probably about 100-200 people working the night shift and thankfully the recreation department tries to make sure we still get to have a little fun. A couple of mornings each week they open one of the bars for us and call it Day-bar (morning is like our night). The nighttime bar scene here gets a little crazy and Day-bar just gets, well, weird. If you go to day-bar and then manage to stay up until noon you can go to the galley while they day workers are taking their lunch break and your ending your “night” of fun. It’s quite amusing – for all parties involved. Last month, my department (ATO represent!) decided to have a gym theme for day-bar – we all dressed up in whacky gym-inspired outfits and did karaoke. Our night-shift supervisor walked around with a whistle and ordered us to do push-ups and jumping jacks periodically throughout the night, well actually the morning, but you know what I mean. You just can’t make this stuff up.

Everyday there are planes coming to and going from McMurdo – both inter-continental and intra-continental. These planes land and take off at Pegasus airfield which is 14 miles from town. Pegasus is on permanent ice shelf and it’s what we use once the ice runway (which is much closer to town) is too unstable. The 14 miles of road out to Pegasus is an ice or a snow road as some call it. We have an entire department of heavy equipment operators dedicated to maintaining the road. It’s a 24/7 job and there are also operations going on 24/7 that depend on the road. We’ve had a particularly warm season here (climate change is so obvious on a continent made of ice!) and the road has suffered greatly, so have all of us who have to drive on the road or rely on the road to get cargo and people to and from planes (which is sort of my job). The road is soft, it’s got huge holes in it, it’s bumpy, it’s CRAP. Starting at about mile 10 it’s so bad that most vehicles can’t make it any further. What’s the answer? MAGIC CARPET! No, but seriously, the magic carpet is a real thing. The magic carpet is a large sheet of HDM (high-molecular-density??) plastic that is hooked up to a Caterpillar Challenger with special tracks (not wheels). Vehicles drive onto the carpet and the challenger drags them on the carpet those last four miles to the airfield. It’s a logistical nightmare. We simply don’t have the staff to support all the extra work this creates, but we have to make it work in order to make things move. I work in the Movement Control Center and we listen to the radio transmissions going on in relation to the airfield – all day we hear people hailing the Magic Carpet over the radio. People don’t mess around too much with radio chatter here either – they keep it professional, so it’s super funny to hear transmissions about getting Magic Carpet Rides. Speaking of Scott Base, my team was invited over for dinner the other night for a second time this season. I can’t remember if I’ve written about that before, but it’s kind of a treat. They’re known for their good food. They only have about 80 people during summer and 15 during the winter. When we went the other night they were down to 20. Every time I go there, I drag my heels coming back to McMurdo. Their set-up is so much newer, nicer, more coherent, more manageable, prettier, tidier, what else? Oh yeah, Kiwis live there and it’s entirely painted in the color “Chelsea Cucumber” on the outside.