As soon as the plane touched down and we were out on the tarmac, there was a certain sense of calmness and peace in the air. Geneva (or Genève as it often referred to) is the second most populated city in Switzerland and has the presence of numerous international organisations including the UN headquarters. Having relished on a fresh chocolate brioche, coffee and a swiss chocolate on the plane, the husband was keen to use his red book gifted by Her Majesty, The Queen to beat me at the immigration queue. Fortunately for me (and unfortunately for him) there weren't too many non-EU people in my plane, and I was soon greeted by a very warm & friendly 'Bonjour' at the immigration desk. The official language in the city and the canton of Geneva is French as its in the French speaking part of Switzerland. The immigration officer asked some questions on how many days I was visiting, which places etc. and thud - he stamped the passport. 'Au Revoir', he said. I had no clue what that meant but I gathered from his actions that I could leave and since I had no objection to that - 'Thanks and Bye' I said.

In most of the cities that I have travelled in Europe, the airports have always been extremely well connected to the city via extremely good and convenient public transport. Geneva airport, offcourse, was super well connected and all we needed to do was come out of the airport, lookup the train timings, and climb down the escalator where the train would be waiting for us. The husband and I did not plan to stay in Geneva, so we ran towards the next train for Montreux which was due to start in five minutes (Like I said before, we are always running). 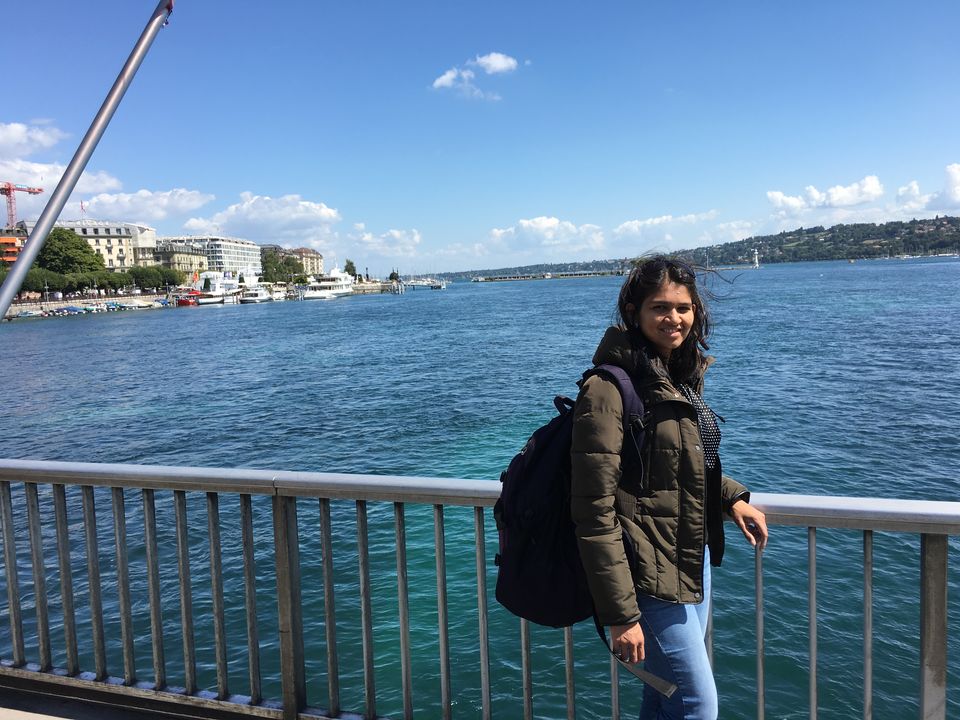 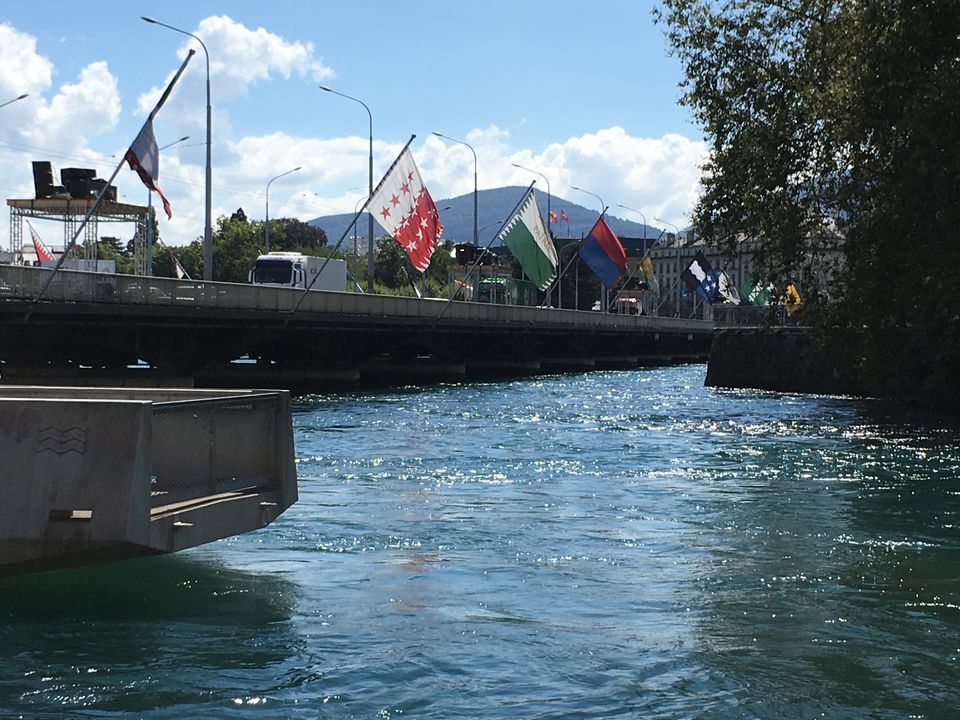 At the Geneva airport 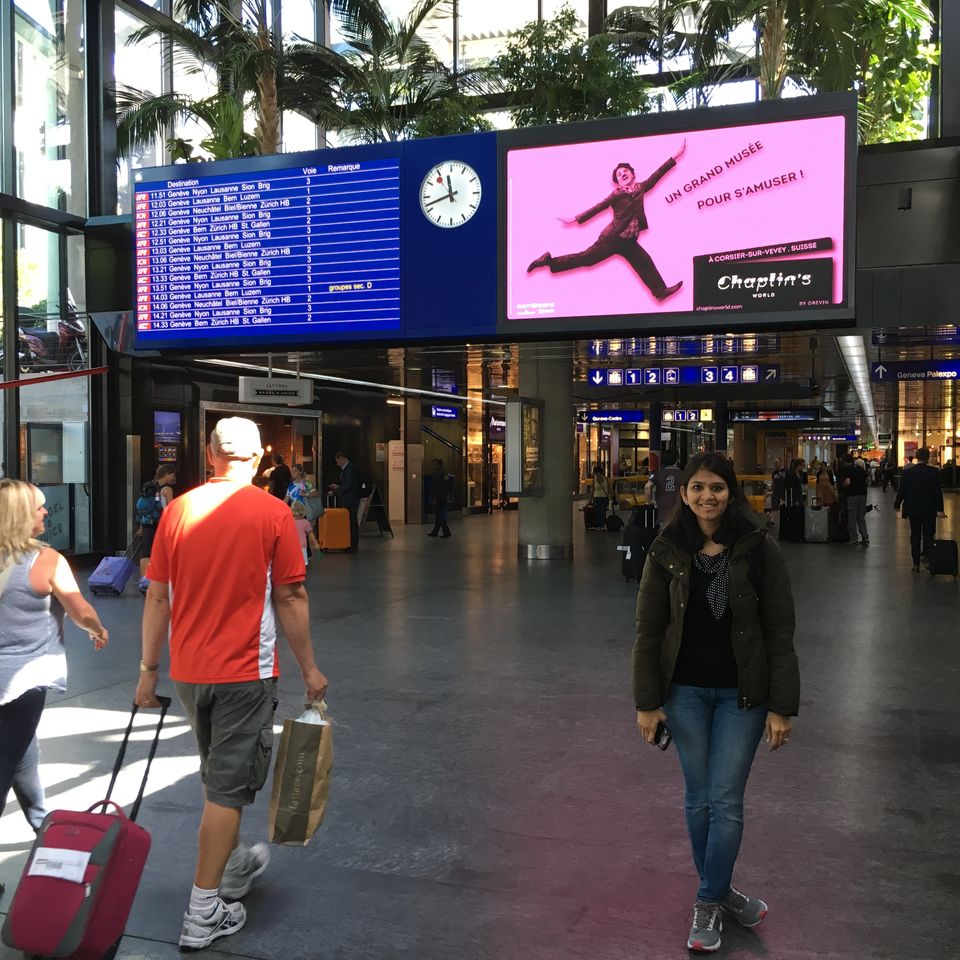 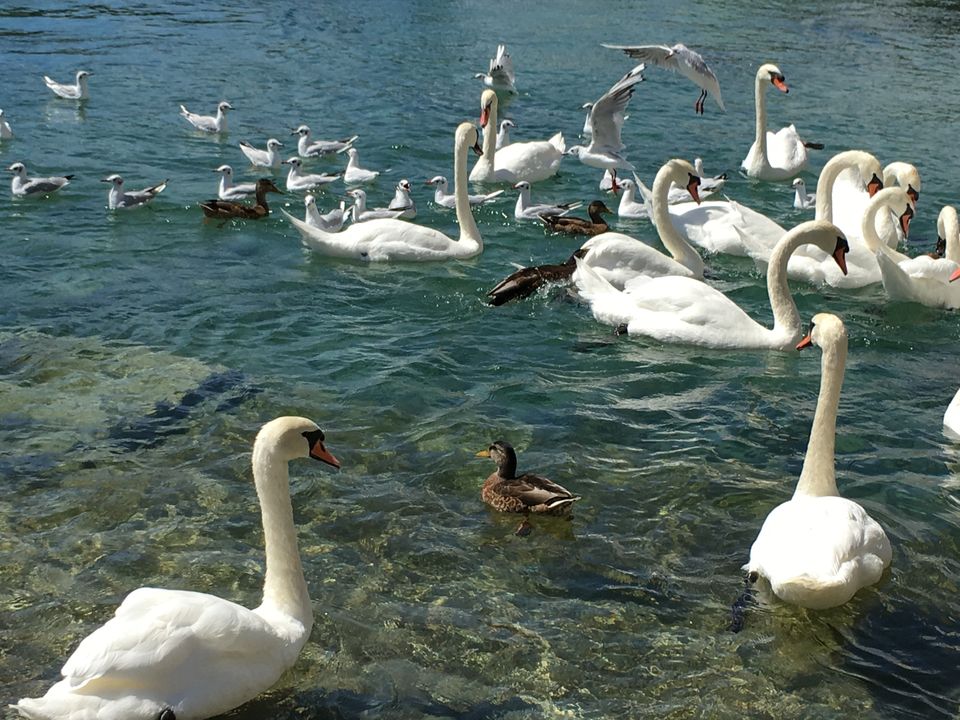 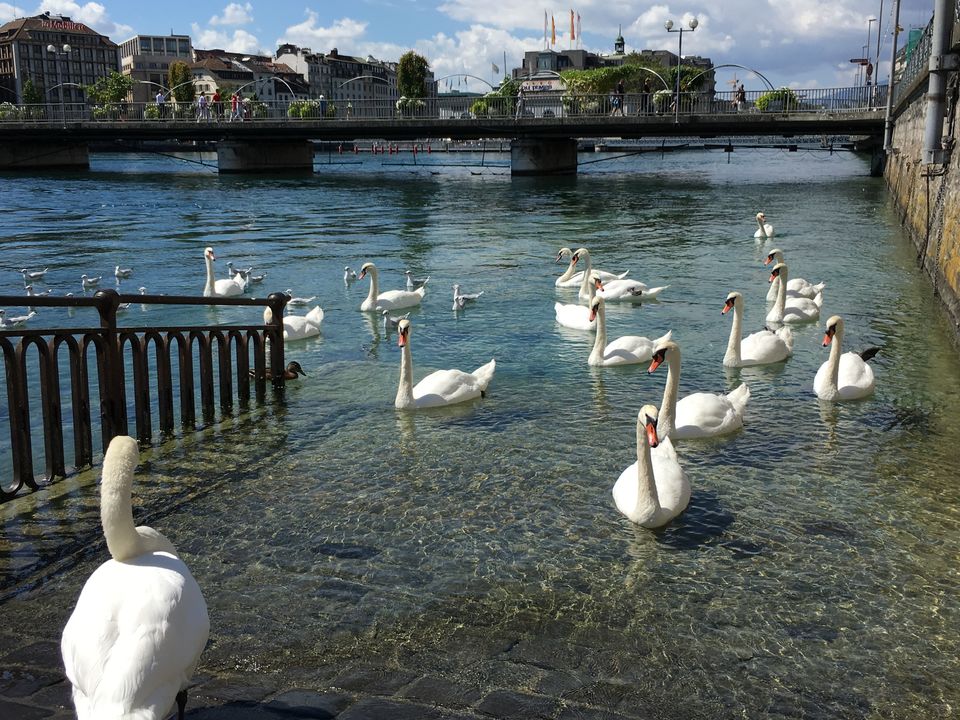 As soon as the train started, there was an announcement that the next station is 'Geneva'. The husband and I were confused & worried both - confused as we had already just landed in Geneva sometime ago and worried if we were in the right train. Whilst we were thinking this in our mind in a very low volume unaware if there was any decibel limit put on the thought volume in this country, the couple sitting next to us shouted at the top of their voice 'But aren't we already in Geneva. Is this train going in circles!'. As the train was coming to a halt, the husband made an impromptu plan to get down at Geneva (meaning the main station) and go around the town for a while. Now normally it would be impossible to make me get up from a window seat in a train but I am always up for walking around a new city so we pulled our backpacks from the racks above and ran to the door lest it shut on our face before we could get down.

Geneva has a vibrant feel - its sleek and cosmopolitan yet quaint and cultural. As soon as you step out of the main train station, its amazing to see the trams and the cycles both going side by side making way for each other. Numerous watch shops of you-name-it brands line both sides of the road. In between, the time machines are interrupted by the aroma of the dark chocolates reminding you that you are in Switzerland. The husband was fascinated by neither - he stopped and stared at a glass shelf filled with Swiss knives. The criminal psychologist will view this husband's enchantment differently but I am just a software engineer so I remind him that our austerity measures mean that we can only have a hand bag so we cannot carry back the swiss knife home in the cabin baggage, so we move on. While walking to the Lake Geneva, the husband stopped and pointed at numerous hotels where he had stayed on his multiple business trips to Geneva during the good times of the bank. I had no way to verify so I nodded my head and trudged along.

After about a good fifteen minutes walk with our heavy backpacks, we finally reached the Lake and it was totally worth it. The lake is so big that you can only see a vast expanse of clean blue water as far as your sight can travel. About 60% of the lake is in Switzerland and 40% is in France. Multiple ferries traverse the water each day and are often used by commuters. We stood over the Mont Blanc bridge - whilst there is nothing extra ordinary about this bridge, we got amazing views of the lake and its situated over the river Rhone at the point where it meets Lake Geneva. The name of this bridge is given to honour the mountain that overlooks the city from afar. You can also see the famous fountain from the bridge. Unfortunately for us, the fountain wasn't on that day so we satisfied ourselves by enjoying the views of the lake. The bridge is well decorated with the flags for all the twenty six cantons of Switzerland which adds colour to the pristine blue water of the lake below. There are several options for cruises and even paddle boats to get around the lake if one wants. There is so much more to do and see in Geneva but our tryst with Geneva was limited today as we started to make our way back to the train station to catch the next train to Montreux. There is always a next time..