I and my friend Harshit planned to visit Velas beach for the weekend. Velas is a small village near popular beach Harihareshwar in Maharashtra. Here we would witness the famous Turtle festival in India. The festival is only second after Orissa. At first it sounds like there would be different species of turtles to taste but believe me its the absolute opposite. It is about conservation of sea turtles. Very few people know they are on the verge of extinction. Also there are numerous myths surrounding them. So I would like to give some light on it first.

There are seven different species of turtles in the world and five among them are found in the Indian Ocean. With the Leather back being the largest and most rare to Olive Ridleys which are the smallest and about which this festival is all about. These turtles live in the sea but they have to lay their eggs in beaches. This is necessary for them to provide a warm environment for the embryo’s development. Only once a year they gather in mass congregation ashore to fulfill this purpose. This becomes a spectacular event called "Arribadas". The biggest event on Earth occur on the coast of Mexico and Costa Rica where lakhs of turtles accumulate. Followed by Orissa, where about ten thousand female turtles come ashore to dig a hole and hide their eggs in them. This happens mostly at night. People from all over the globe cover distances to witness this grand event. The same Arribadas occurs in a small scale at velas and the whole of Maharashtra coastline. And it is the hatching of these eggs after 50-60 days when the Festival commences.

Although these turtles have a life span of 80-100 years, and their eggs laying capacity being upto 120 at a time, a sharp decline is found in their population in the last decade. It is hard to believe that they are killed because of high sea pollution, ocean liners traffic, fishing nets etc. Young hatchlings become prey for bigger fishes. Even the eggs are smuggled for food or eaten by other predators. It is estimated that only 1 in a thousand survives!!

It therefore became need of the hour for their protection against these acts. So in year 2003 Local NGOs joined hands with government and Forrest department and came with a strategy to safeguard the species.

In Maharastra, Sahayadri Nisarg Mitra plays the key role in conservation of these species. They are not only engaged themselves but also train local villagers for a more combined effort. These people work everyday right after the Arribadas. They collect the eggs and conserve them in artificial hatching nets. Their morning starts with an examination on the nets and evenings are no different. On the day when hatchlings hatch out, they carefully discharge the babies in the ocean. Large number of tourists gather every year to these villages to witness this event. But nobody is allowed to touch or pick the babies. The hatchlings are discharged in the sea in the morning. In the evening there are awareness programs by the NGO which everyone must attend to clear all myths surrounding sea turtles.

Rest of the time in Velas was spend in fun by the sea. The waves at this beach are very strong. And Rocky Mountains surround them all along the coastline. One needs to be very careful while going inside them. But sitting on sand at some distance and quietly listening to the waves is very soothing. Cool breeze gives you an “air bath”. One also gets very nice view of sunrise and sunset there. Surely we would return there for Arribadas. During which NGOs train the tourist for patrolling at night for safety of turtles.

Hatchlings start towards the sea 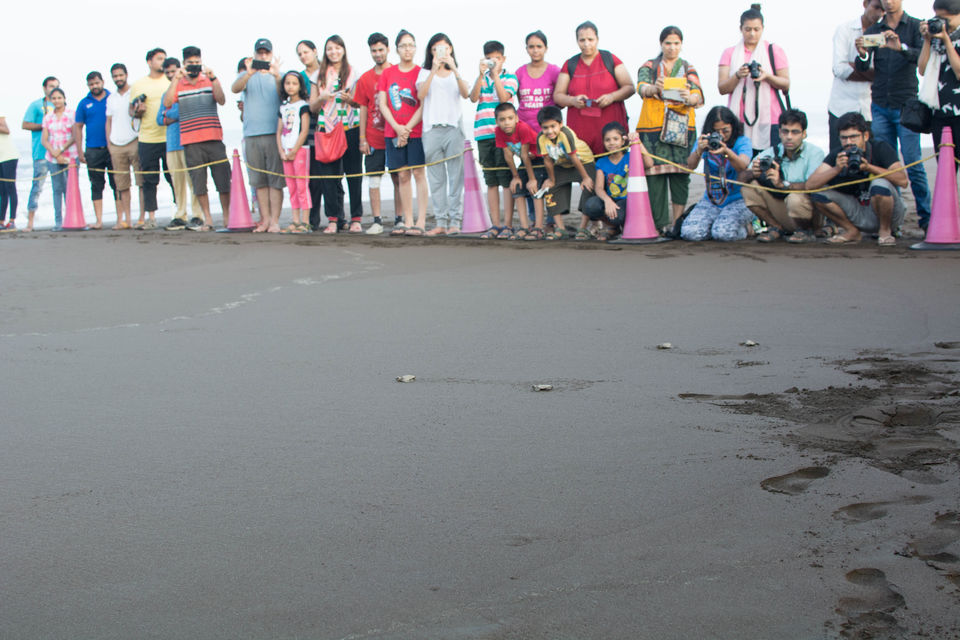 Sahayadri Mitra taking care of turtles till they reach the sea 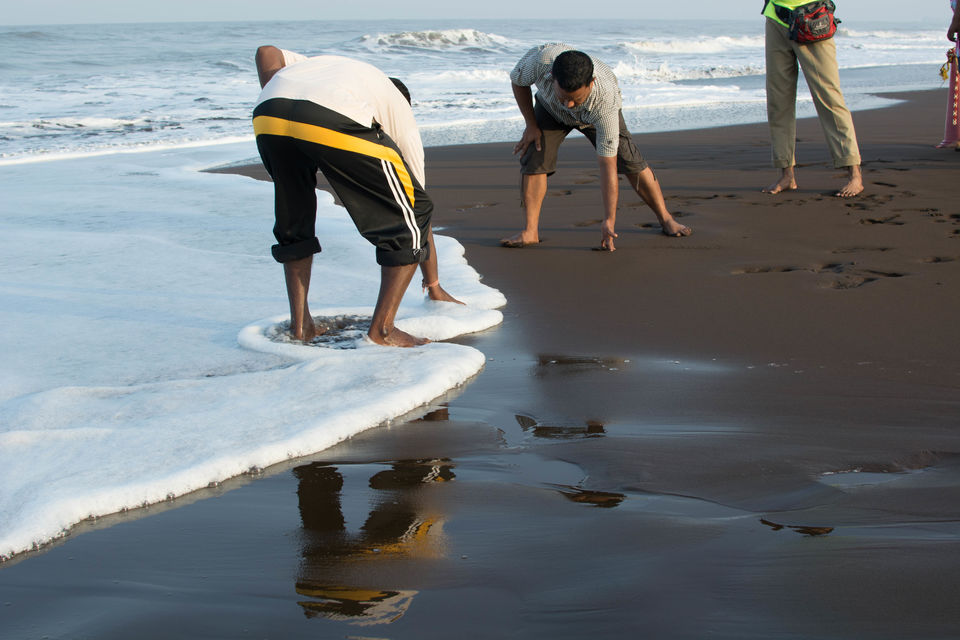 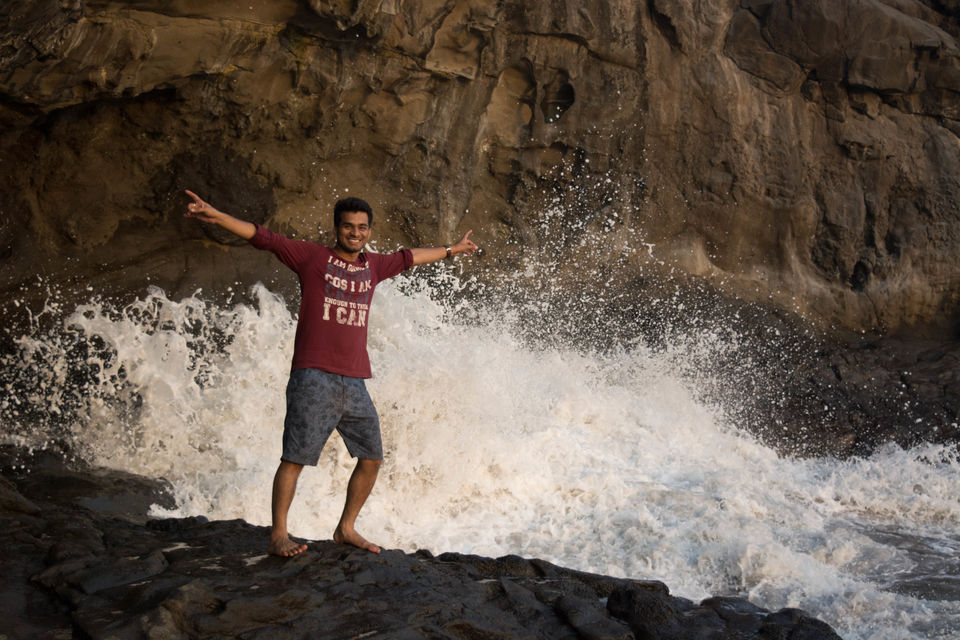 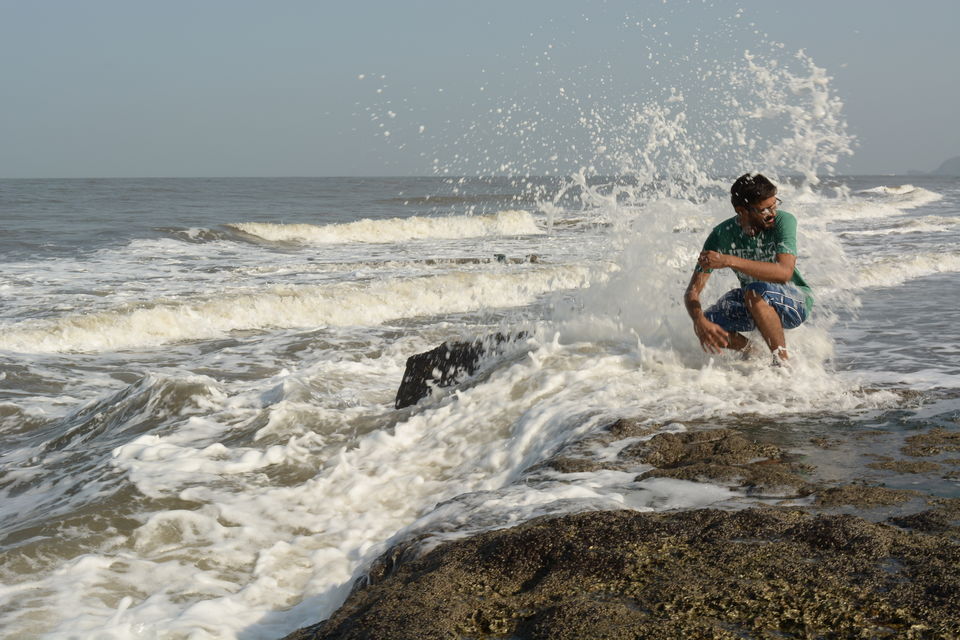