India Travel GuideIndia TripsAnecdotes: How Paite Tribes In Manipur Kept Us Safe In A Land Without Technology | India 360

Anecdotes: How Paite tribes in Manipur kept us safe in a land without technology | India 360

During our trip around India, we spent two days riding our motorbike in some of the most remote regions of Manipur. The hills in the south-west of Manipur is home to Paite tribes. We drove through Paite territory as part of our ride from Imphal (Manipur's capital) to Aizawl (Mizoram's capital). The drive goes through a 'highway' that has no layer of tar for several kilometres. Electronic communication is of little use since there is very little mobile phone signal and absolutely no 2G/3G/4G signal at all. Yet, the Paite tribes maintain a communication channel mainly through word-of-mouth and through their limited BSNL mobile phones. You'll be surprised how fast word spreads from one village to another. Here is one such intriguing story.

At Imphal, we stayed with a friend, Yaiphaba Rajkumar, a Meitei native born and brought up in the city. Yai works for NABARD or National Bank for Agricultural and Rural Development. It is a government organisation which seeks and funds agriculture, cottage industries and infrastructure projects in the remote villages of India, where commercial banking from private banks has no reach. So Yai has his share of contacts in remote villages, whose names are not known to most people. In our case, this unheard of village was Changlei.

When we discussed our route map from Imphal to Aizawl with Yai, he quickly made some modifications since he knew that certain routes were still under construction or were severely damaged. The months between March to June is monsoon for north-east India and it can rain anytime and can do so for several hours a day. Roads which are not in good condition are nearly unusable unless you have a powerful four-wheel drive SUV. If you are a city slicker from Mumbai or New Delhi on a well-intentioned, but ill-informed road trip in north-east India, then you'll have no idea what to expect. Heck, we found out two days later that nor do city slickers from Imphal. Yai's estimation on when we'd reach Aizawl was off by several hours 😀.

Our best route, i.e. exiting to Assam's Silchar and then entering Mizoram via a good highway were dashed when we found that roads to Silchar were closed due to damage to a bridge over a river. So Yai called up a colleague to ask for alternatives. The colleague suggested a route via Sinzawl, a village near the border of Manipur and Mizoram. The two colleagues had been on the route during an official visit by car, when they were surveying the area for funding some projects. Yai told us that while it should be possible to reach Sinzawl before the end of the day, the only place along the way with options for staying overnight was Changlei if our plans were to change. So we took note.

Yai also told us about PK Lun, the principal of a school at Sinzawl, with whom NABARD was working to build an English medium school. After a series of calls, Yai had PK Lun arrange for our stay at Sinzawl for the night at his home.

The ride didn't go as smoothly as Yai had estimated. Since he had been on those roads only by SUV which was driven by another NABARD employee, he had no idea what to expect for a motorbike ride. The roads were much worse than any of us thought they'd be. It had rained all of the previous night and also early in the morning on the day we left Imphal. The road from Imphal to Moirang to Churachandpur was no problem, since these were urban areas. But 10 km beyond Churachandpur, once we crossed the Khuga dam, it was desolate. The road was stripped of tar at several places due to weather and lack of maintenance. We ended up riding on wet and slippery slush for most of the ride. The ride was much slower than expected. When we tried to communicate with natives in the remote villages, they understood neither English nor Hindi.

This is among the better roads in the remoteness of north-east India. Otherwise they were so bad that photography was not on our minds. Rather our priority was to hold onto our motorbike for our dear lives as the motorbike skidded, bounced and slid around. 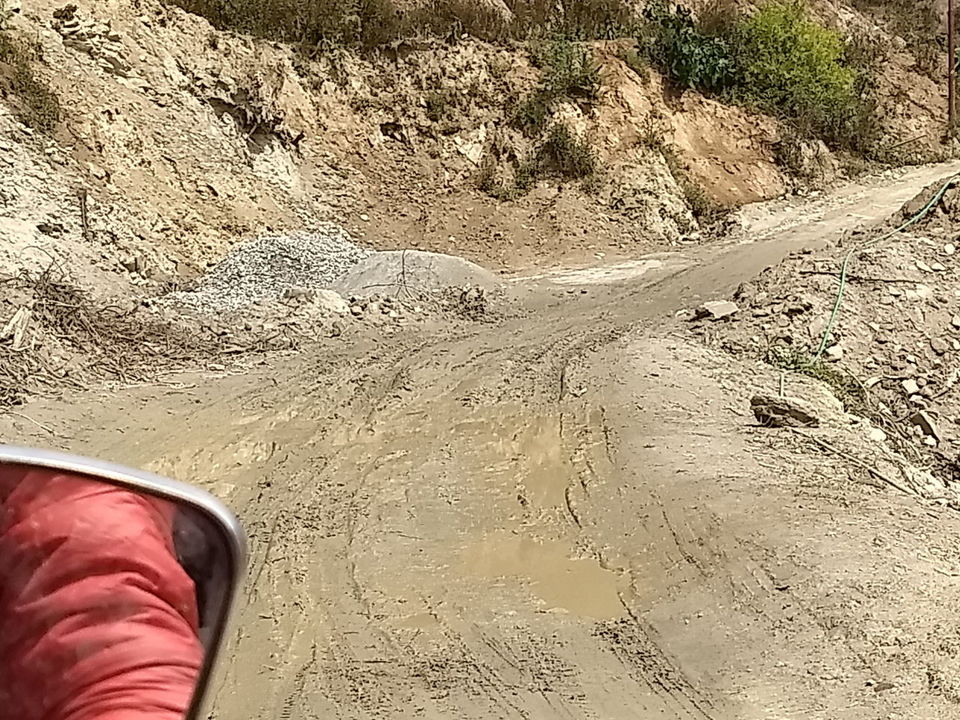 By sunset, we could somehow limp our motorbike to Changlei, where we found a dormitory for overnight stay. Just as Yai had informed us. Thank you so much Yai. We tried to call Yai to tell him that we hadn't made it to Sinzawl and had to stay put at Changlei. But neither of our mobile phones could get a signal and we gave up. On our way into the dormitory, we noticed a pickup truck with a license plate starting with MZ (Mizoram). This was assuring, since we felt that we were closer to Sinzawl and Mizoram border than the road and our seemingly endless ride had made it appear. Later we found that the distance was 28 km.

In the morning, we resumed our ride from Changlei and estimated that we'd reach Sinzawl in two hours. This time, we made progress on time, to meet our realistic expectation. But the ride had some unexpected events on the way.

The man with the map

With about 10 km left for Sinzawl, when we were passing through a certain village, a man who was waiting at the shoulder of the road, waved to us to stop. "You are going to meet the principal PK Lun at Sinzawl, right?". Huh? How could he possibly know? Well, he did and was prepared for it. He had expected us the previous day since our original schedule was to reach Sinzawl by the end of day. He handed us a map hand-drawn by pencil showing the highway to Aizawl, the smaller roads of Sinzawl and how to find the principal's home. He had even drawn small details such as a tree by a hairpin bend on the road. He also handed us an envelope that we were to give to the principal.

The hand-drawn map of Sinzawl and the way to PK Lun’s quarters. 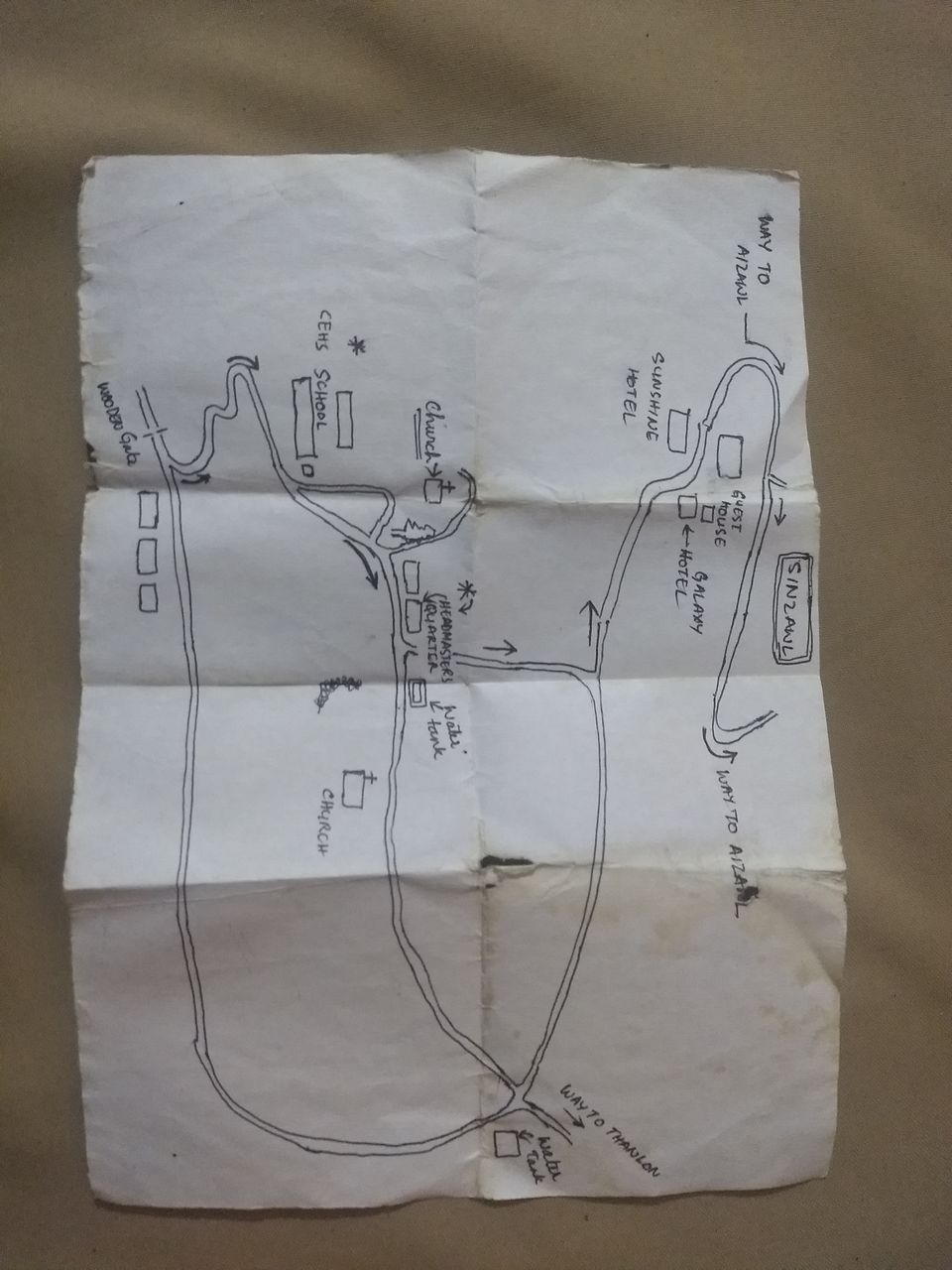 How did he know how to find us? We agree that it is easier to find a bright red-coloured motorbike marked with an MH license plate (Maharashtra) in Manipur. But still, had he been standing all afternoon and evening the previous day and then all morning until we reached him?

The two of us with Mr PK Lun and his wife at Sinzawl. 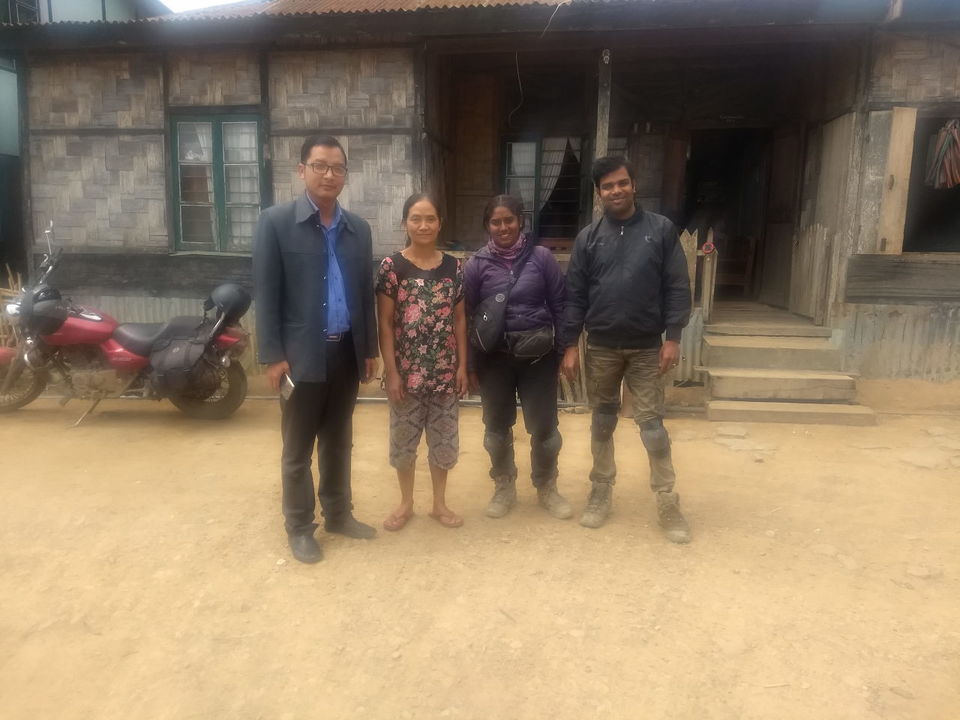 With the map, we didn't have any problem finding the principal. It was near the village's Presbytarian Church. He had egg buns and warm tea ready for us for breakfast. We talked to him about his school and about Paite tribes. We also apologised to him about our delay and handed him the envelope, which he accepted gratefully. He mentioned that he already knew about our delay. Huh? How? We hadn't informed him. Our attempts to reach Yai had been futile. Who told him and how?

Since the roads out of Sinzawl are confusing, PK Lun himself rode ahead of us on his Enfield to escort us to Tuivai river bridge, a bridge over Tuivai river that runs north to south. The river seperates Manipur from Mizoram. PK Lun was way too experienced on the dirt roads of Sinzawl due to years of practice. We had a hard time keeping up with him and he had to wait in corners to see if we weren't lost.

Mr PK Lun with his Enfield at Tuivai river bridge. 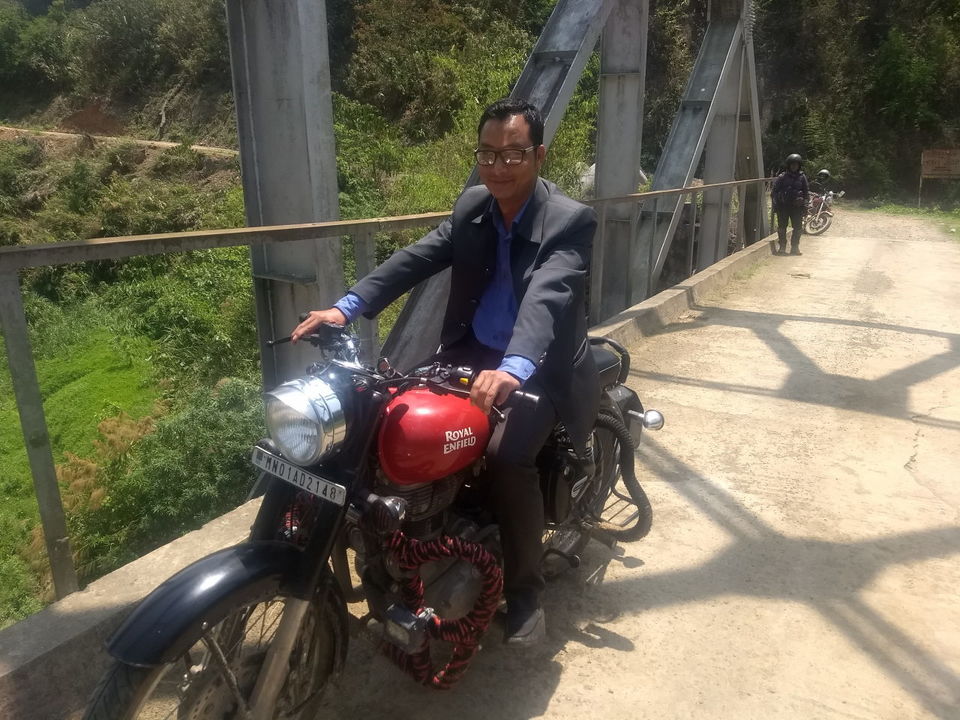 During one such wait, we saw him talking to the driver of a pickup truck with an MZ registration. It was the same truck we had seen the previous evening at Changlei. After talking to the the driver in what we are guessing is Paite tongue or Mizo, PK Lun turned to us as we caught up him and told us that the driver was the one who had informed him about our delay, because he saw us pulling into the dormitory. Huh? Had he driven past sunset to Sinzawl? Unimaginable for us, but for those living in the mountains, such things are reality and routine. And how did he knew who we were? How did he decide to make it his lookout to inform PK Lun about our delay? How many more people were communicating amongst themselves in creative ways to see us through the tough route? It was touching to know that in the desolate route filled with so many challenges, people were watching out for us.

In our city life, where we conclude that we can't reach someone because our mobile phone battery is dead, it was inspiring to see an entire community spread out in isolated villages all coming together to ensure the well-being of two persons who were just out for a joy motorcycle ride.

This story originally appears on India 360 blog, a blog where we, a couple from Mumbai, India, write about India 360, one year of self-planned travel around the country.