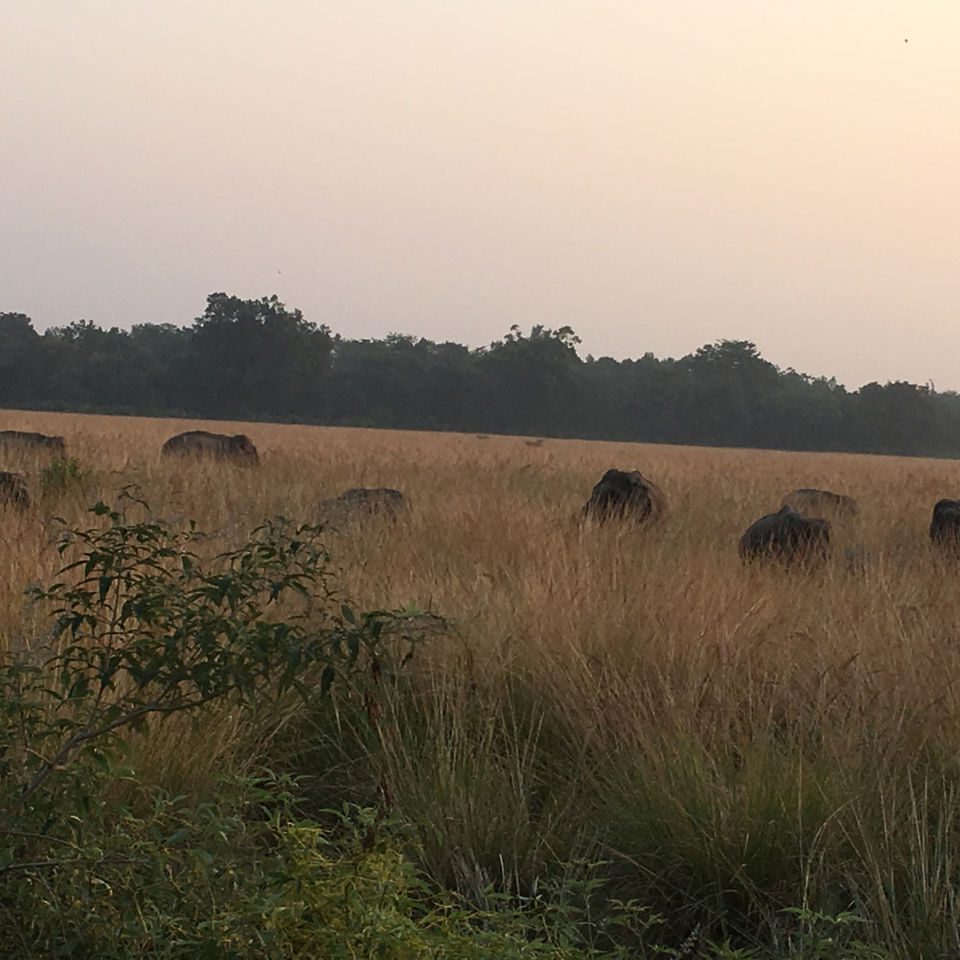 There used to be a a time when a single vacation every year was considered enough.The vacation interval eventually came down to 6 months which has now further reduced to a travel once every quarter.To make sure that these frequent trips don't prove too heavy on pocket, filling the vacation calendar with some domestic hang outs in the near vicinity becomes a must .

As for the domestic outings , we had by far visited hills, backwaters, beaches, forts but Jungle safari was still untouched. And that’s how Jim Corbett happened.

We left for the adventure early morning which is around 9:30 a.m. from NTPC Dadri , a thermal plant’s township ,about 25 km from Ghaziabad . (For those wondering how exactly can I dare to call 9:30 am as early morning , well your honour , I was with some of the most beloved people a night before and just little hi hello types conversations ended around 2 a.m. So I plead not guilty.) 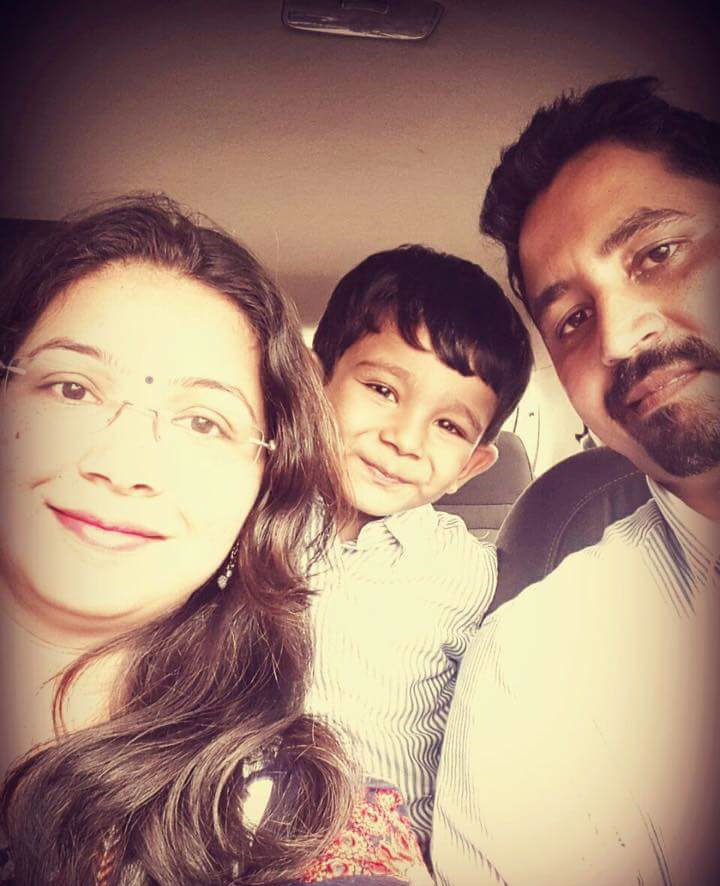 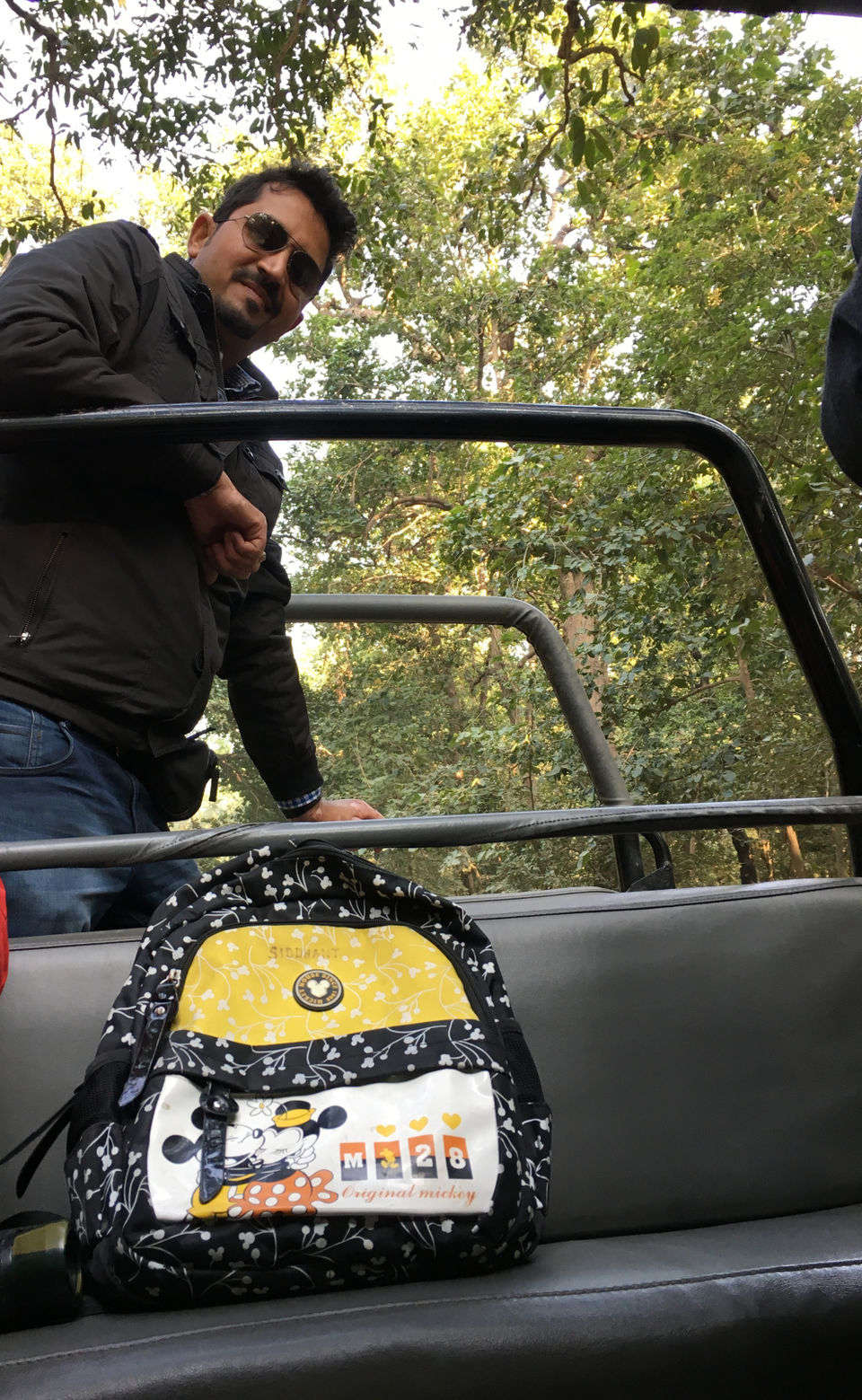 Coming back to journey, the route that we chose was the standard Delhi – Jim Corbett way via NH 24:

While driving,both sides of NH 24 looked rather unfamiliar but the destination awaited was cool enough to keep us excited all through the journey.

Everything was going smooth with wonderful roads throughout and so we thought we would reach our resort- Namah at Dhikuli way in time and will pounce on the super delicious lunch as mentioned repeatedly on various online portals but it took almost 1.5 hours to cover a stretch of around 45 km from Moradabad bypass to Kashipur, thanks to the butter crisp road (read sarcasm). I was really fed up of driving at snail’s pace for more than an hour , with my 4 year old son Yuvi doing his best to irritate me by repeatedly screaming while having his chips in the rear seat - “Lagta hai papa car chlana bhool gye hain”(Looks like dad has forgotten how to drive).But eventually, the ordeal ended and a well laid road welcomed us again .Finally we reached our resort just in time to be able to enjoy the super luscious lunch.

With starters of the tour done, it was time for the main event – The Jungle Safari at Jim Corbett. Down came the Maruti Suzuki Gypsy to carry us from resort to the zone gate.Gypsy by the way used to be a style statement when I was a growing up and I was really happy to be on board.

Since the vacation plan formulated at the last moment and I didn’t book any safari in advance, so the all-time favorite Dhikala & Bijrani zone were all sold out and we had no option but to settle for the only zone available – The Dhela Zone. Going by the reviews, we weren’t really hopeful of seeing a tiger or any other exotic animal and were rather expecting a pretty average outing. But the moment driver cum guide, Javed , pressed the race pedal, the adrenalin got pumped in and we got all very excited with our first open jeep family outing, with cold winds drifting past from all ends. The fun continued for next 25-30 minutes till we reached the entrance gate of Dhela zone. 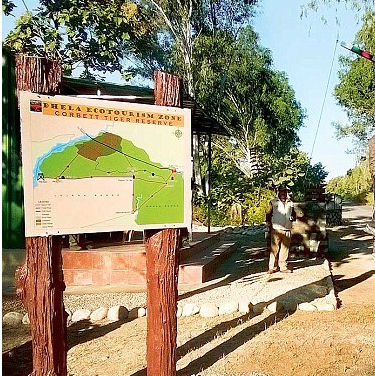 We equipped ourselves with the soft weapons - binoculars, goggles,camera and the forest expedition started.As our gypsy crept along the path, within first 5 minutes, we were clear that this is going to be an altogether different and really unforgettable experience with nature in so much abundance all around . You feel oodles of energy as you go past thick jungle with so many mystic sounds of birds/animals coming from all directions. As the feeling of safari was sinking in , Javed the driver/guide, suddenly stopped the car and pointed towards a particular direction where we saw two spotted deers . 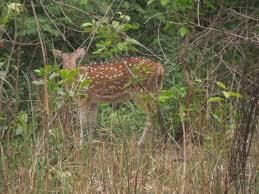 It felt so good to see their innocent acts. That’s when I realized that there is huge difference between a zoo and a jungle as in the latter, its you who has to follow the rules as you are not supposed to get out of gypsy at all while the animals roam around freely like the boss.

As we moved further, a cute little mongoose ,who looked extremely naughty going by his restless acts, crossed us so swiftly that I could not even click him unlike the wild boars who did gave me some time . 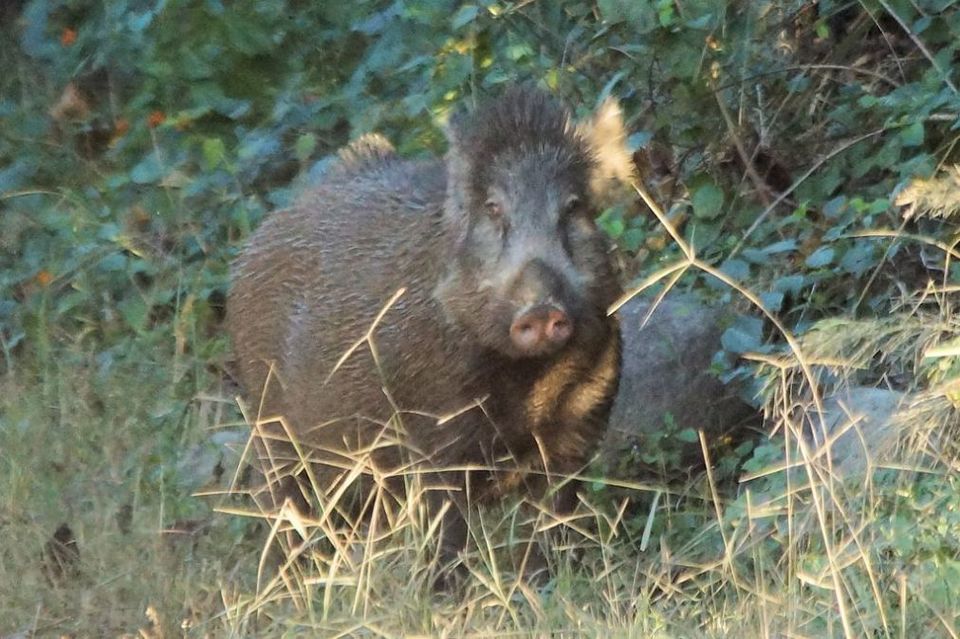 It is really difficult to put into words how wonderful one feels in the middle of the jungle where nobody knows what you are about to witness next.

“Ssssshhhhh” , said Javed , “Tiger is nearby, he is going to cross the road right in front of you , 100 % guaranteed Sir ,just be quiet” he continued. The whole family including Yuvi,the kiddo, obliged by being quiet, even though out of excitement , my eyes grew wide enough to convey my question very loudly to the driver -“How do you now ?” He then gestured to be quiet and to listen strange sounds carefully. We noticed that monkeys were indeed making a certain kind of whistling sound repeatedly. It meant that Tiger was on prowl, as told by Javed. We all froze there only with our eyes looking all over with shear excitement to have an up close & personal meeting with Mr. Tiger in his own abode.

15 minutes passed, nothing happened. “Missed call tha shayad” (Monkeys probably gave the missed call) said Javed and I gave him a piece of my mind,again through eyes, this time even wider with multiple folds between my eyes while Yuvi too got really pissed off. The adventure however continued till Javed stopped the car once again after about 5 minutes or so at a watch tower, . He again said , a little submissively this time , “Sir, believe me, he is here”. Javed obviously meant the Tiger.

Not willing to take another heart break, Yuvi showed his clear disbelief over Javed by crying as loudly as he could when he was supposed to be rather quiet and hence, we just clicked few photographs and then left towards grasslands near the exit gate. 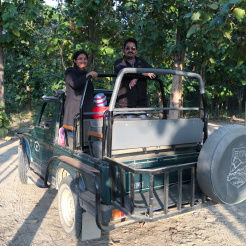 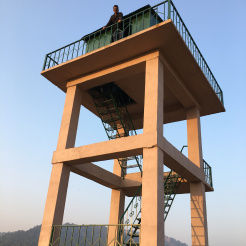 A beautiful sight awaited us there as a big group of wild elephants were having time of their life ,playing and feeding on herbs.Not that we haven't seen elephants before,but believe me,watching them enjoying in their group, in the middle of a forest, is a different sight all together.

Just then, another gypsy crossed us with tourists yelling that tiger crossed the watch tower area just 5 minutes after we left.It was now Javed’s turn to give a look , “See, I was telling you Sir” he said with such wide smile as if he had just won an Oscar.I smiled back & saluted Javed -The Tarzan and then we left for the exit gate ,on our way back to resort.

NAMAH, the resort we stayed at, definitely deserves a special mention here – no, neither I am their brand ambassador nor have I been offered any freebies but the extra ordinary hospitality and the courtesy of the staff there is what actually bold us over.

Yes, the staff of luxury resorts like Namah is supposed to behave nicely, no big deal but what made the difference here were the natural mannerisms instead of the forced smiles . From reception staff to the chefs, from housekeeping guys to the attendants, each one of them made sure that we enjoyed every single moment spent there.

It was our marriage anniversary that day and the resort staff did everything to make the day even more special. 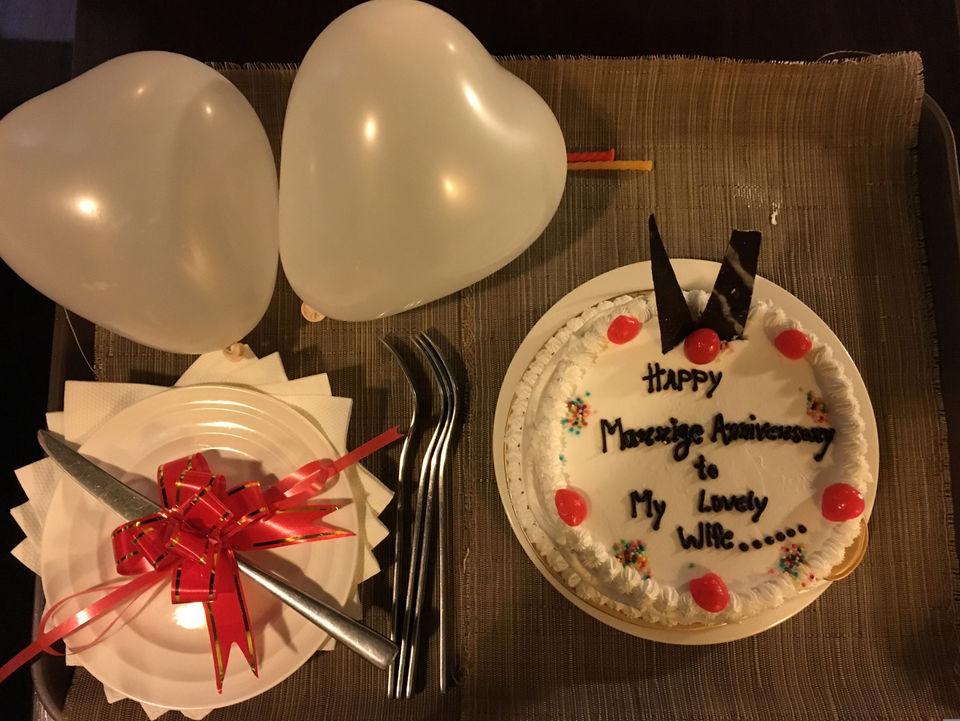 Of all the good things, we really enjoyed our family cricket session at the resort with delicious dishes being served at whatever location we desired. 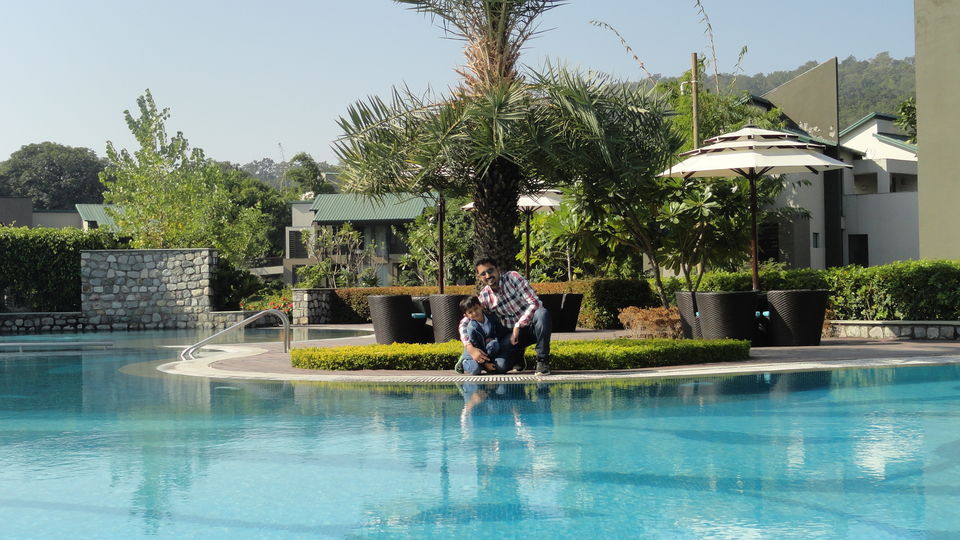 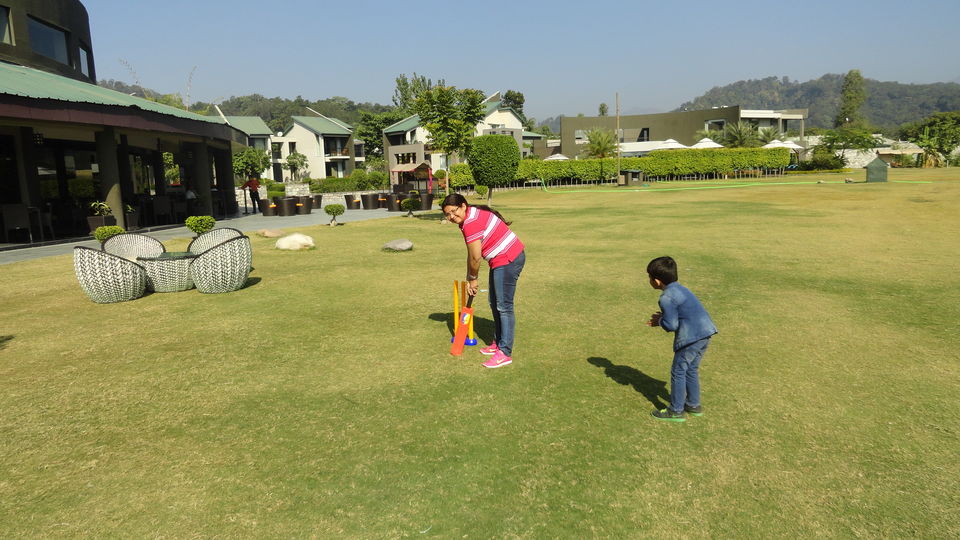 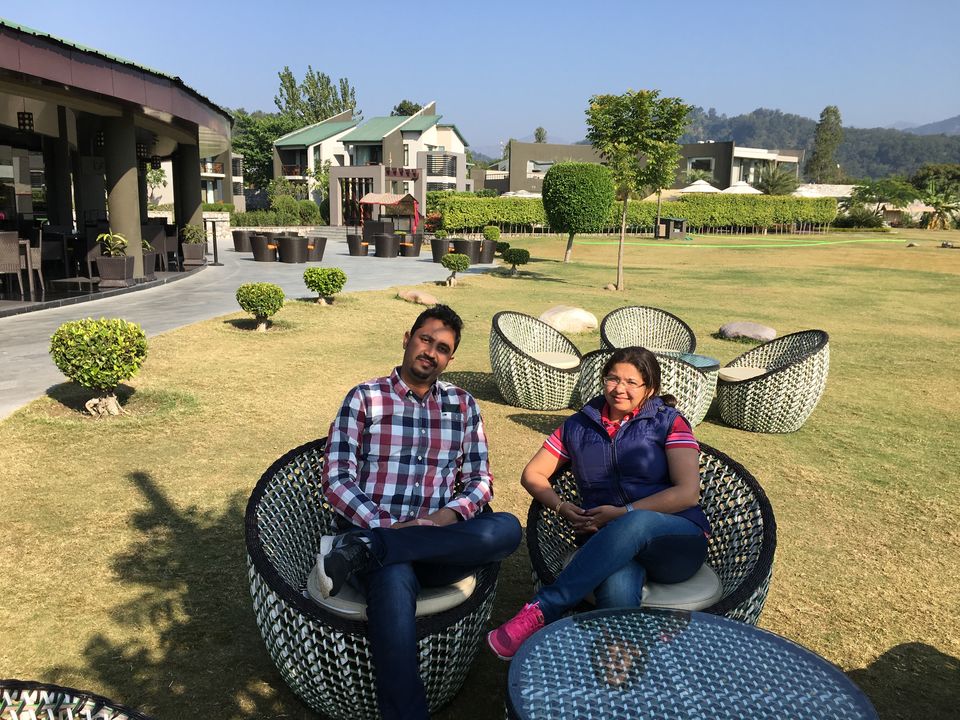 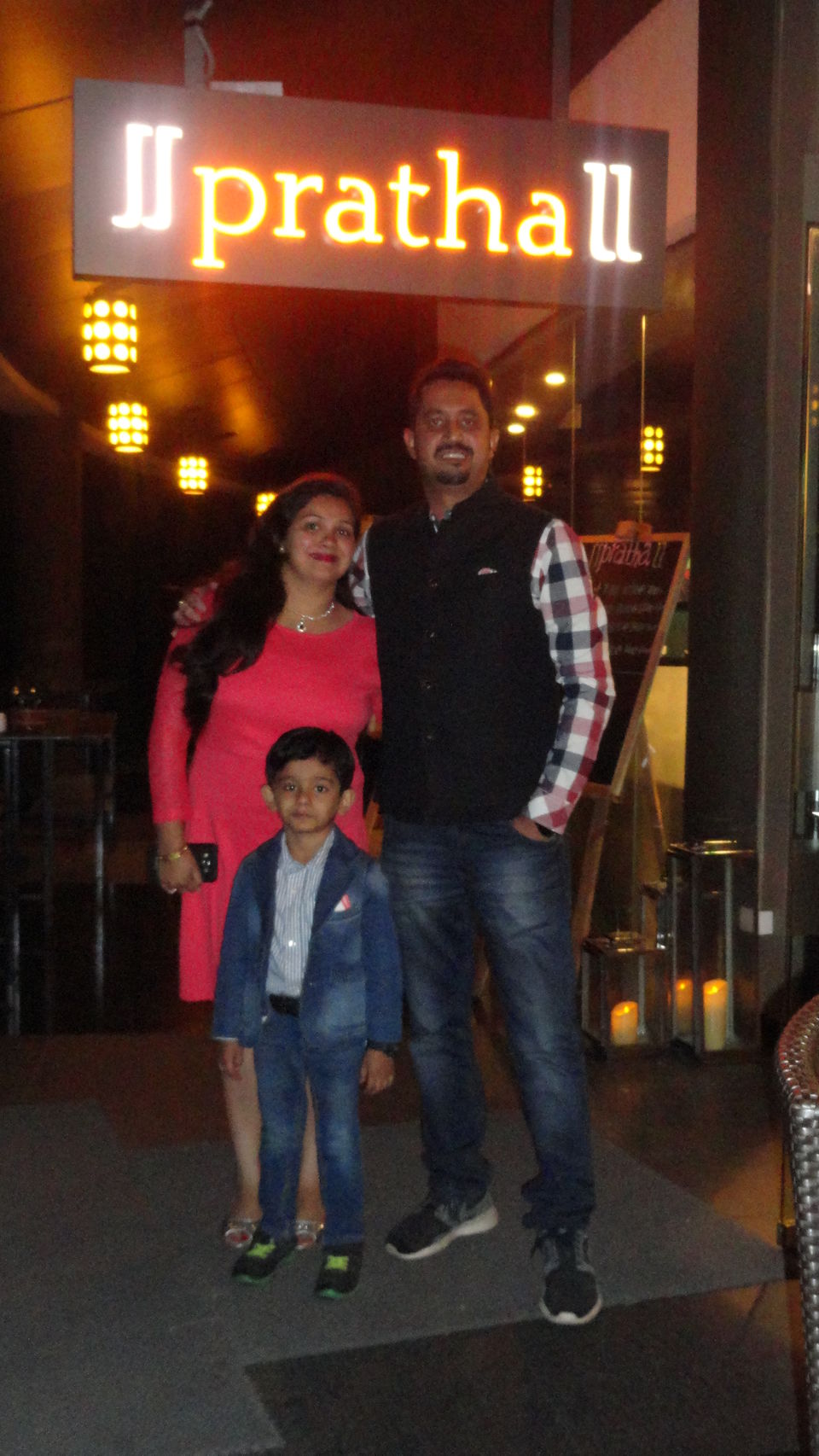 Though we did not wish to say goodbye so early but owing to some prior commitments , we had to leave for home after spending the memorable 24 hours in the middle of nature & wildlife . However ,the Jungle safari hangover does stay with you for a while.I look forward to another such experience soon !

Travel Tip : Jim Corbett is definitely worth a visit guys , 1 or 2 days are fine but please make all the bookings 45 days in advance.

Namaste & take care till we meet again on some different journey next time !

Would love to meet you at Inside Out with RahulYuvi