“Once a year, go someplace you’ve never been before.”

It’s been four days that I took off on a train with my friends to a journey which was going to be remembered by us all. It was not just a college trip, it was a journey which was going to show the friendship, the companionship and the trust between us which will take us to a long road ahead in our life. After two days of enthusiasm and craziness in the Golden Temple and Katra India-Pakistan Border and yes the hotel where we stayed four-man in a room, it was a go time from a not so beautiful Amritsar city, as the pollution was totally visible from any part of the city and especially from the top of the hotel we were staying. Early morning an ear-cracking series of knocks woke us up and we had to pack and get to the bus right away. And we did just that. Staying in a 3-star hotel is not at all usual for me and my friends. It had a hair dryer which helped me set my hair in a way perfectly as I wanted. And embarrassing enough, but the tap and shower system was also new for us. The room had a locker, a broken refrigerator and a coffee maker pot, also a TV and an AC, and the best thing was the bed which was the softest bed I ever slept on. Of course I was missing that hotel room already, as the fact that we were about to go on a long journey to Kullu via Dharamshala.

Another journey, this time on a bus. Temperature was increasing as the day flew, and we were empty stomached sitting on bus that doesn’t even had much of a leg space for me. So we took a halt on a highway-side restaurant which took way too much time to cook us a brunch. Until then all my classmates began their photoshoot outside the restaurant. Almost each and every one was either taking a selfie or taking pictures of others. Some were climbing on the top of the bus and some were standing ideally in corner busy in their phones. I for certain took pictures with my lab group and some solo for my DP. The vicinity of the hotel was quite nice. It had a cent of Punjabi soil and farm which I was finding the whole time. The temperature was not too low and the sky was clear, making it a perfect spot for photography. And finally after what I thought was the end of time, the doors opened for us and we had our brunch. It was not the best food, but it felt the best as I was dying of hunger.

Making our way to a Northern journey, we had a great time in the bus. We sang, we laughed, we talked, we gossiped a little, we took pictures of the beautiful scenes we saw from the bus, and lastly I can say we connected. But ‘we’ here is not all the people inside the bus. Some were sitting with their phones and earphones, some were doing all these in themselves, some were sleeping and some were using too much of their energy on every part of the body to enjoy and make us enjoy. The energy level inside the bus was so much varying that it can be shown on a graph. At one point It was at the peak, and gradually it decreased to the bottom of the graph. At this point songs were maintaining the mood and yet the view outside was not letting us blink our eye, but the best part was yet to come. 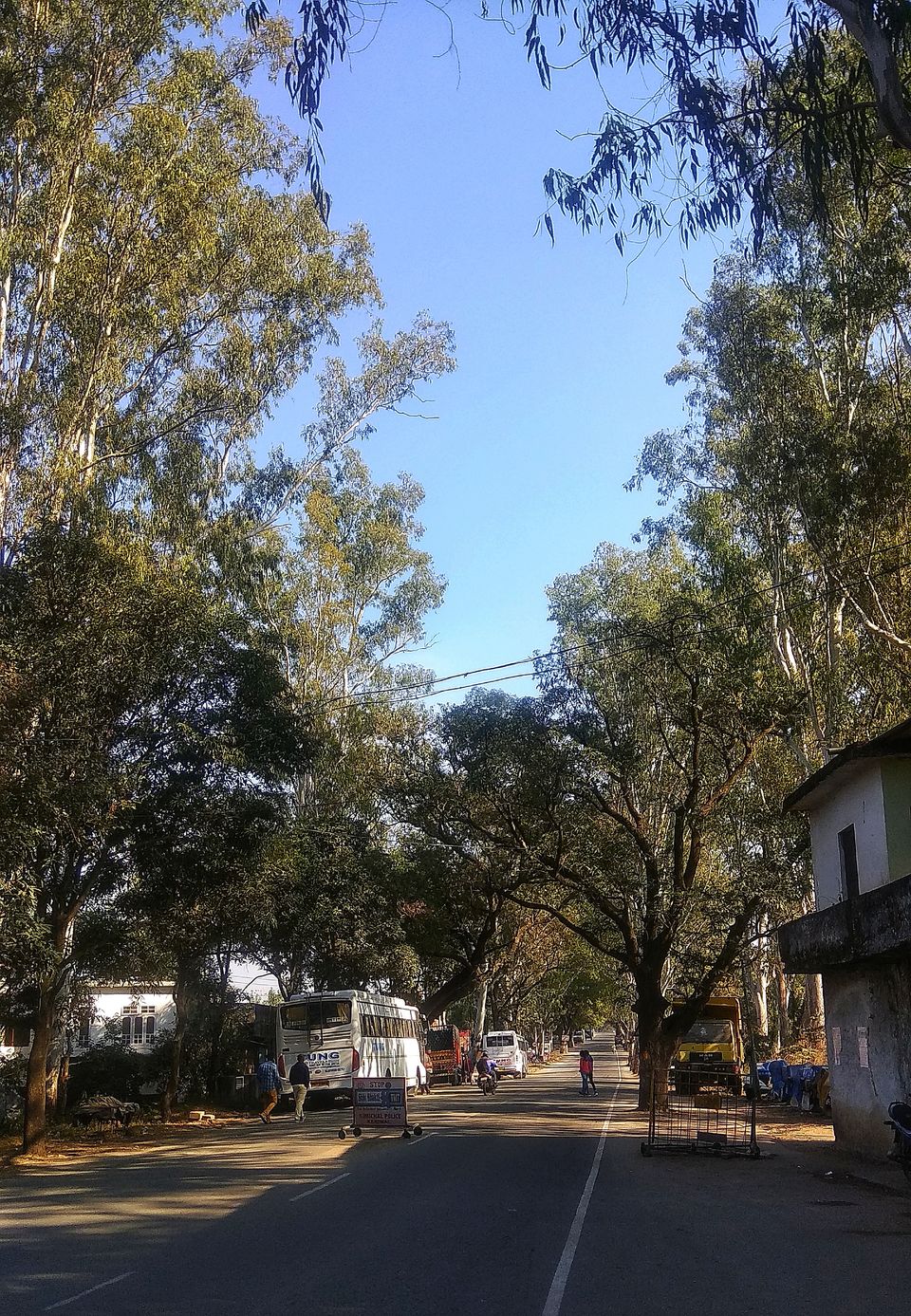 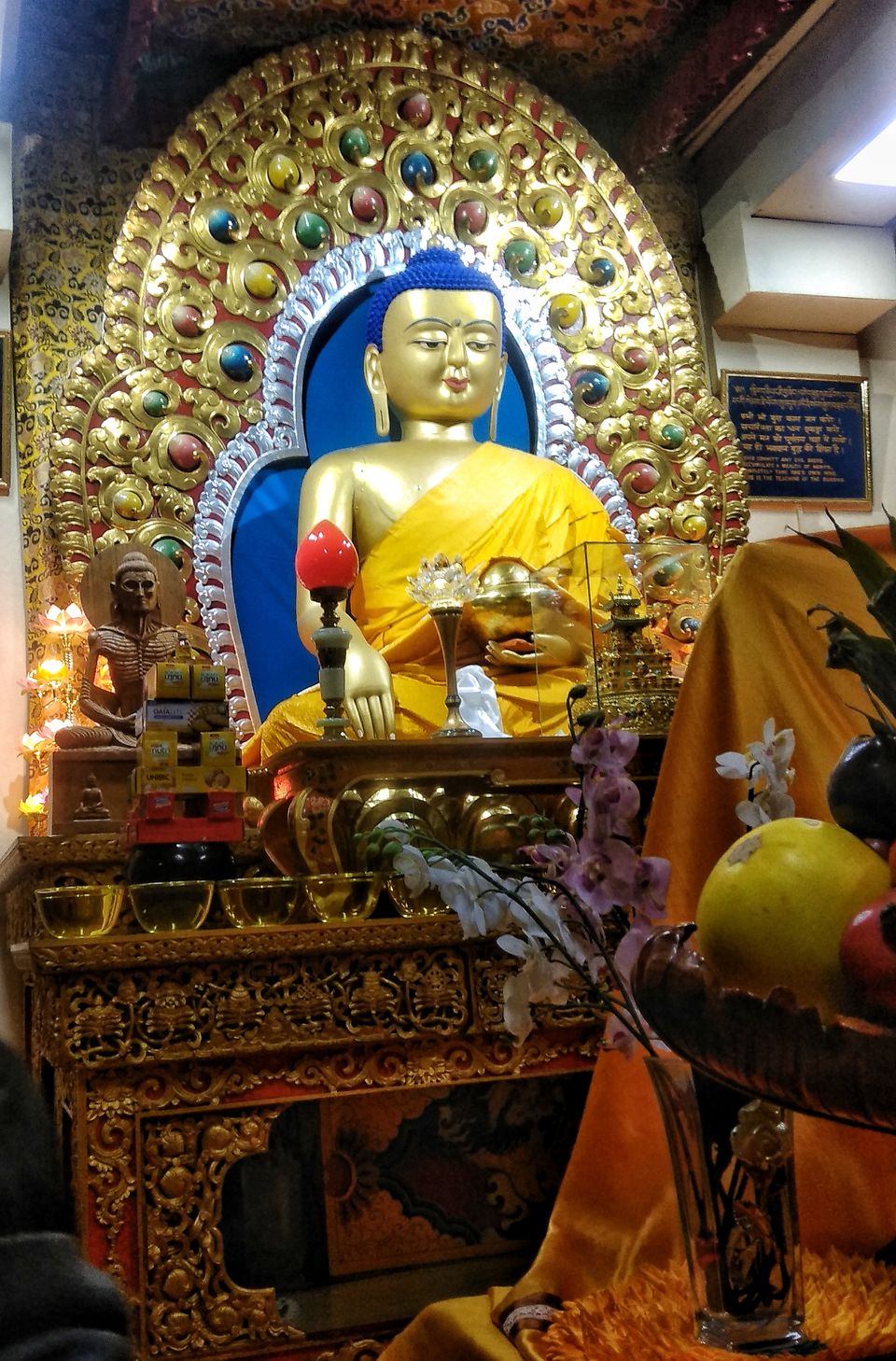 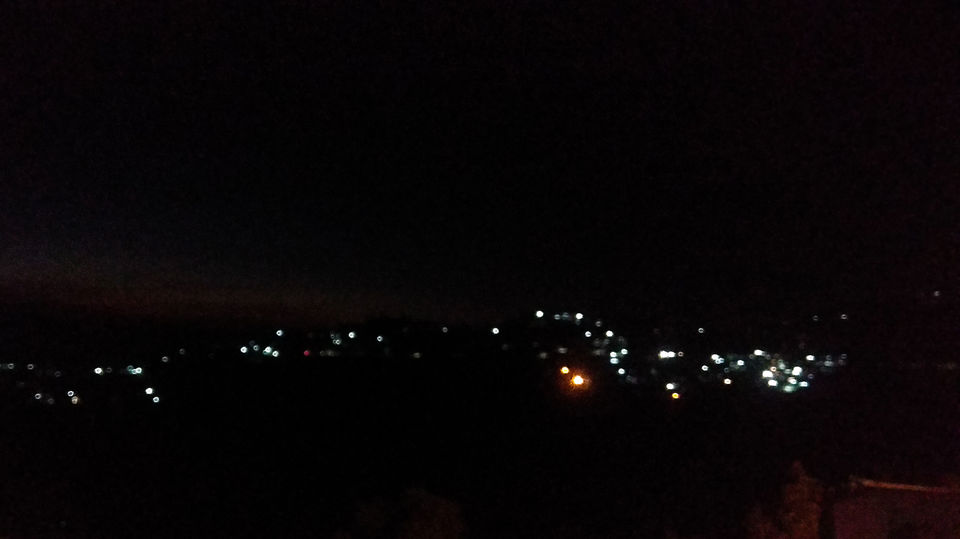 We took another short break. While the tour guide was filling up the toll for the two massive buses with above 70 people, we went on a nearby Tapri for tea and stuff. I didn’t realize before coming out of the bus, but it was a necessary break for us. The air outside was so pure and chilly, my mind was immediately relaxed. The road was surrounded with big and green trees giving me the perfect reason to take a click, not a perfect click, but a click to remember. And then we were officially inside Himachal Pradesh. As we drove, we were going up and above. And as we were escalating, the view was getting prettier and more satisfying. The flowing river, the giant mountains, the shining rocks, the thick trees, the green farm and the local houses, everything was turning into something I never saw and now writing and thinking about it, I again want to go and explore everything there. The wind was getting chillier, the light was fading, and the clouds became larger as if they came down from the sky to greet us welcome to this beautiful planet. Everything they say about how our planet is beautiful, blue, green, peaceful, and a literal heaven, all seemed true then, and indeed it still is.

Continuing with the journey we reached a very interesting place and it was the first time I ever went inside these type of places. We were at the Himachal Pradesh Cricket Association Stadium, Dharamshala district. I was super excited to know that I was about to enter a cricket stadium for my first time. The moment I stepped out of the bus, I saw the mountains covered with ice above them. They were too beautiful for my unworthy eyes. I wasn’t able to turn from them, but I had to, as in front of me stands a place only seen in TV by me. It was like a thing-you-saw-in-TV, and when you actually go and see that thing or possess it, it’s a dream come true. Just like that one of most of my desires came true. We entered the stadium, on the right there were some kids playing with ball, and on the left some were doing their net practice. I saw them and thought if I ever lived in HP, I could be one of those kids practicing there and designing my future. Thought of it gave me chills and at that moment I never thought I will be writing this down and actually having a dream to chase.

The seats were empty but tourists, other than us, were present there taking pictures and maybe enjoying the match going on the ground. Not exactly what my desire was, but it was still an awesome feeling been there. The main attraction and the main reason why this stadium is a tourist place is that huge mountains covered with ice on top of it, were clearly and beautifully visible from the seats. The stadium as a whole when included with the mountains is a wonderful scene a man would want to see. The wind was chilly, the colors were vibrant, the sky was clear and I was with my friends which makes an incredible package to experience. We took pictures, some group, some solo and some to capture the beauty of the view. The view was making me stay there as long as my life I guess, but every story has to end someday, and so as this one. We then took off to The Dalai Lama Temple. 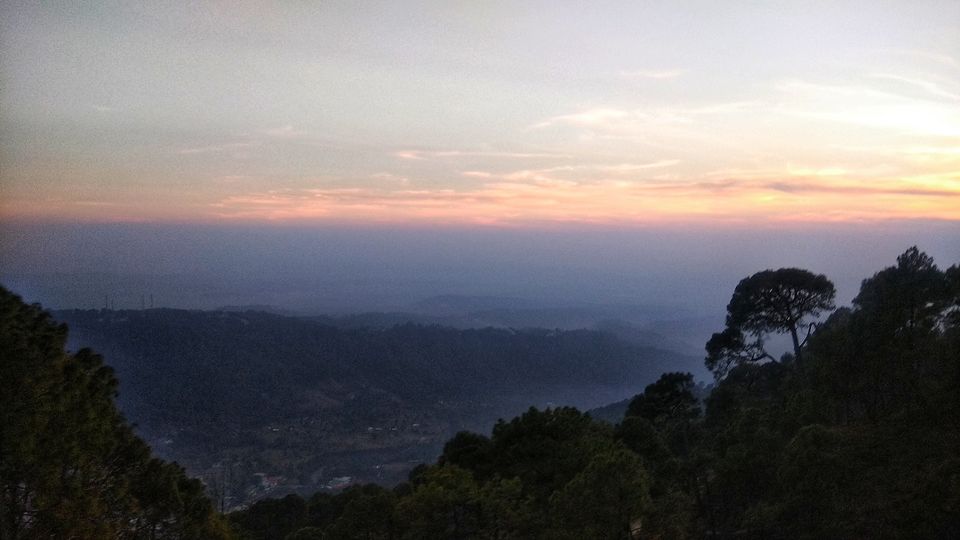 As we were going up, the scenic view was getting better and better. Watching that valley was all I wanted at that point. The trip was getting very adventurous as well as terrifying. That’s because the bus in which I was sitting was longer than the other bus, so at the sharp turns on the elevating narrow road, the bus had to reverse a little, and it was almost each time a turn came.

Namgyal Monastery also known as Dalai Lama Temple, was our next stop in Dharamshala. It was evening when we reached there, the temperature was low and I was very much hungry. We had to walk to the temple from our parked buses. The street was covered with tourist, not only Indians but foreigners too. We reached the monastery of the 5th Dalai Lama. Apparently most of the parts of the temple were closed except one part where a beautiful statue of Lord Bhuddha decorated with colors and a bunch of things like fruits and showpieces were offered to it. The room was extraordinarily decorated with wall paintings and handmade cloths containing different and colorful pictures of a Lord Bhuddha. The lights were just doing their thing as the statue and everything in its vicinity shined and reflected their vibrant colors all over. It was peaceful inside. Some people sat there praying and some just to experience peace of mind. And that, peace of mind, is the one thing every soul living in a metro city is craving for. No matter how hard you try, a city person can never get a peace of mind without coming in a place like this.

Coming back from the temple it was time to explore the street glamour shops. I was way hungrier than before, so I ate a plate of chicken momos from the first seller I saw and I heard a thanks from my tummy. So continuing my exploration, I visited some luxurious shops and some ordinary shops. Some shops were selling these most gorgeous statues of glass of different shapes, and some were selling the handmade stuffs, and I was attracted by one of these stuffs, a Dream Catcher, to decorate my home. It was night time and we were standing near the parking area waiting for all of the students to come back. We were obviously at a high altitude, and from there a city was visible. Not one house was visible, instead they were replaced by dots of lights. It was a city of lights on a dark planet. I just have one word to describe that, Magnificent.

And then it was time to have some food, leave Dharamshala and reach Kullu.

Honestly it was a surprise you read all of that, Thank You. See you in my next blog where my adventure continues i.e. Part-3 of College Trip.

“I’m in love with cities I’ve never been to and people I’ve never meet.”