Most dangerous road "Kishtwar to Killar" 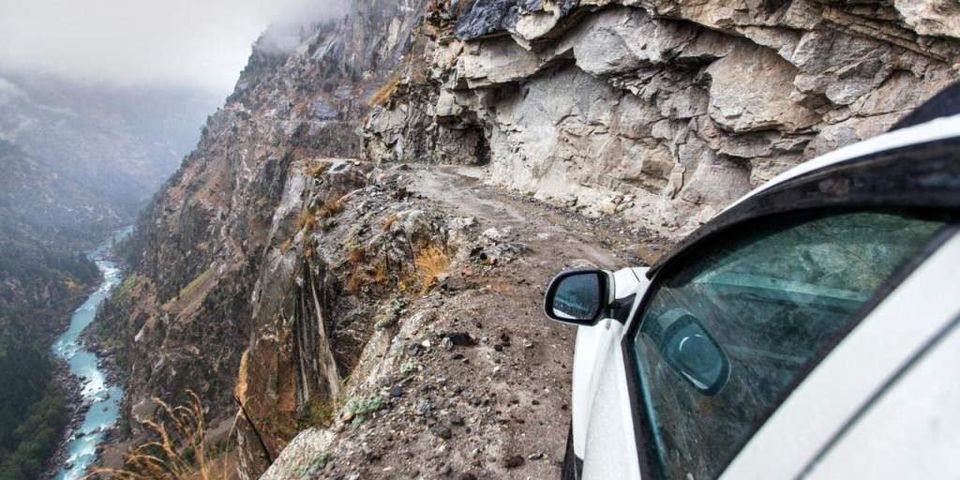 World’s Most Dangerous Road between Kishtwar (Jammu & Kashmir) and Killar (Himachal Pradesh). The road is so narrow that only one vehicle can pass at a time with numerous steep inclines and declines. This road gives access into Pangi Valley of Himachal Pradesh. The road is full of rocks, loose soil, etc, on one side there is 1000 feet freefall into the river Chandrabhaga and deadly mountain cliff hanging on other. The road condition is never constant, it sees many landslides. One mistake and it can turn out to be disaster. This road is featured into many travel forums as “One of the most Dangerous Roads in the World”. (Tyar to Sansari)

Terrifying high mountain trail, with a length of 114 km, located at the eastern extremity of the Kishtwar District of the Jammu region in Jammu and Kashmir, India. If your GPS ever thinks it's a good idea to drive on this road, it may be time to get a new one! It's a narrow, windy road with no guard rail or secure edging for about 100 miles, with views of the valley thousands of feet below.

The road is part of the National Highway 26, running along the Chenab river. It’s incredibly disorienting to look over the edge, or even just to see the valleys a couple thousand feet below you. It’s a mind numbing vertical drop of hundreds of meters so you might want to give it a miss on a windy day. The surface of the road is gravel, stones and sand and it’s carved into the side of a cliff. The one lane path had no guard rail and the overhanging cliff is so low that the cars barely fit, with over a 2,000ft drop, and rocks hanging down obstructing your view of oncoming traffic. This road has humbled many egos. It’s not for the sissies and shouldn’t be attempted by novice drivers. The road is in dreadful condition and requires strong nerves to negotiate it.

The road is the main gateway to the basecamp of Kishtwar Kailash, a 6.451m mountain. To reach this trail, you can arrive to this area from the west, taking the road over the Rohtang Pass from Manali to the Chenab Valley and then following the Darlang Valley to the base of the mountain. The climb is simply terrible, with a notorius lack of oxygen that tests the organisms and a high degree of steepness. The area has been more or less closed to mountaineers for political reasons since the early 1990s. Residents of the Valley welcomed the opening of the road, as it represented a huge boost to commerce and tourism in the region whose dangerous, hard-to-travel terrain meant the area was cut off from tourism and other forms of economic development. The last 50km of road to the start of the ascent proved to be extremely scary. Words can’t describe the road and pictures don’t do it justice. Some tourists had dubbed the track the 'Almost Killer' Road.

This track can get very muddy and slippery after rain making it challenging to get through. During and after a storm the road may be impassable, even with a four-wheel-drive vehicle. The Border Roads Organization and J&K State PWD have done a brilliant job by constructing roads in the middle of nowhere. A record number of people have sacrificed their lives to make this road a reality.

There are some narrow sections -scarcely wide enough for two cars- where if two vehicles have to pass each other, one might have to reverse for some kilometers of winding narrow road to get to a place wide enough to pass. It shouldn’t be attempted by those who don't know how to reverse. The road is difficult and it’s a nightmare in the wet or dark (or both).

Your wheels will be astounded at the wonderful views of the mountains spread out before you! They are terrible for drivers who are prone to vertigo. In many places the road is bordered by a drop of hundreds of meters (many hundreds of feet) unprotected by guardrails. People who are scared of heights, are claustrophobic must not venture to attempt this ride. With a vertical drop of thousands of feet straight into the Chenab river, it is definitely for the bravehearts.

This route is not recommended if your passengers are prone to car sickness. Traversing this road call caution, confidence and consideration towards oncoming traffic. There is little room for error on this road. Stick to the centre as the edges can sometimes simply crumble away. It`s nicknamed The Cliffhanger due to the narrow passage where cars rarely take this route; forget buses. Some of the turns are crazy with plenty of blind-spots. Snowfall can leave the valley in complete isolation.

World’s Most Dangerous Road between Khillar (Himachal Pradesh) and Keylong (Himchal Pradesh). This road connects Pangi Valley with Lahaul Valley in Himachal Pradesh. There are numerous steep inclines and declines. On one side there is 1000 feet freefall into the river Chenab and deadly mountain cliff hanging on other. The road condition is never constant, it sees many landslides. This road is featured into many travel forums as “One of the most Dangerous Roads in the World”