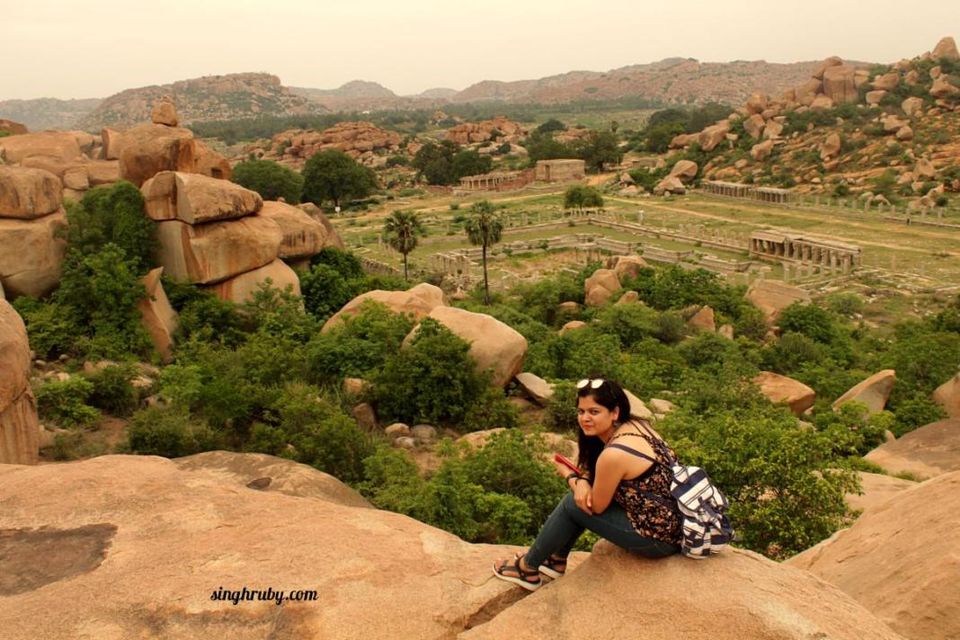 At the very outset this is the much awaited rant on my recent Hampi visit. Hampi is one of the most preferred destinations for solo travelers especially for women. Even on internet search for safe destination for solo wanderers Hampi stands right at the top of the list. Going by its image I ventured out on my first ever solo trip and no prizes for guessing that I was headed to Hampi. I reached Hampi safe and sound. My overnight bus ride was smooth and I reached Hospete bus station at 4 in the morning without any hiccups. My stay in Hampi was with Vijayshree Resorts and they were kind enough to send a driver to pick me up from the station. So far so good.

The first day was spent wandering around Virupaksha and other temples in that complex. By the end of the day I met two other solo travelers and we planned to spend the rest of the days together. The second day we opted for a cycling group with a guide and he took us to various temples from other complexes.

Here happens the first glitch, when we decided for the cycling group we were told that we will be getting a guide affiliated with Karnataka Tourism. But that didn't happen we were handed over to a man who has the most concocted version of stories to tell. I bet Ekta Kapoor could take a lot of inspiration from him. While it is totally understandable that whatever stories we hear around any heritage building, they all have blur lines but one can totally tell if you are making them up from head to toe. I was so annoyed with the guide that I left the group earlier than the actual time. He charged us the full amount and we were duped.

Now comes the second case of deception. After leaving the group we decided to spend the rest of the day at Hampi Island. To reach Hampi Island you will have to cross Tungabhadra River which is merely 200 meters broad. To do so there are ferries and coracles available. The ferry charges 30 Rs per person. We were told that if you wish to return the last Ferry back is at 5:30 in the evening. Totally oblivious of the future events we happily took the ferry and perched on Hampi Island.

At the time of return the ferry charges exponentially increased from Rs. 30 to Rs. 100 per person. It was a little after 5:30 PM and going by the timelines they should have totally stopped the service at all. Rather they choose to continue the services on sky high prices. In no time there were more than fifteen people haggling with the ferry guy to bring down the prices to Rs. 50. He even mentioned that we were wasting our time because very soon the prices will be doubled. The group included many foreigners too, an explicit mention to them because they were going to talk about this act of deceit in their country. All of us requested him way too much but he didn't budge.

While the whole scene was in motion my friend took the guy's picture and told him that she will be complaining to the police. He blatantly said she could do what all she wishes to and nothing is going to change. Soon after that, a couple agreed to pay Rs. 100 because it was getting dark but the ferry guy took a round turn and said he has stopped the service until his picture (that my friend has taken) has been deleted.

If you don't opt to cross the river the only other way around is via road and the distance is more than 40 kilometers. Given the odd hour it was no one's preferred choice. Though many were ambitious enough to plan to swim across the river but then someone from somewhere mentioned crocodiles and the idea was down the drain. In the end we had no option but to give up to his trickery.

The next day we got to know that the approved rates for the ferry is Rs 10 per person and because of safety issues it is strictly prohibited to continue ferry after 5:30 PM. Apparently the same person got the tender of the ferries for both sides of the river and he has been charging as per his wish to recover the tender amount. This information is as per a local shopkeeper in Hampi Island. So basically we were the prey of complex political chicanery.

Now the last and the most horrible experience. Ever since it was confirmed that I will be going to Hampi I was most excited for the Vittahala Temple. It houses the iconic chariot which is not just the highlight of the temple but whole of Hampi. I spent around an hour in reaching the temple and I was out from there in just few minutes. This doesn't include the time I spent with the guide. As soon as the guide was gone the whole hullabaloo started.

There were guys everywhere with front camera ready cell phones and while you look somewhere else they will click pictures with you in the frame. Some of them were wise enough to seek permission but most of them just clicked. Consent is still a scarce thing. Not just with me I saw the foreigner females facing the same issue. The temple has beautiful carvings and the moment you let your guards down admiring them someone will click a selfie with you. It was discomforting and a direct invasion of someone's privacy. I literally had to shout at times to make them go away. They will go away but not unless they have passed some not so sober comments.

I left the temple premises way before I had planned but guess what, that wasn't enough. I and my friend were followed by this huge group of guys who were continuously whistling, singing and passing on lewd comments. At times we stopped and they stopped too but later the same story again. We halted at a coconut water shop and allowed them to pass first. Once they were gone it was normal day ahead.

Of course I will. I am not saying that these incidents are monumental enough that someone will have second thoughts about the place. I managed the ferry by paying extra and managed the guys by leaving early. But look where are we headed, from nothing and no incidents to this, and if this goes ahead in the same pace things are going to get worse.

From reading blogs on how safe Hampi is to writing this one, we surely have come a long way. If you are headed to Hampi do take care of these issues and plan accordingly.

"I am taking My Alexa rank to the next level with #MyFriendAlexa" Global Alexa Rank: 1,387,922