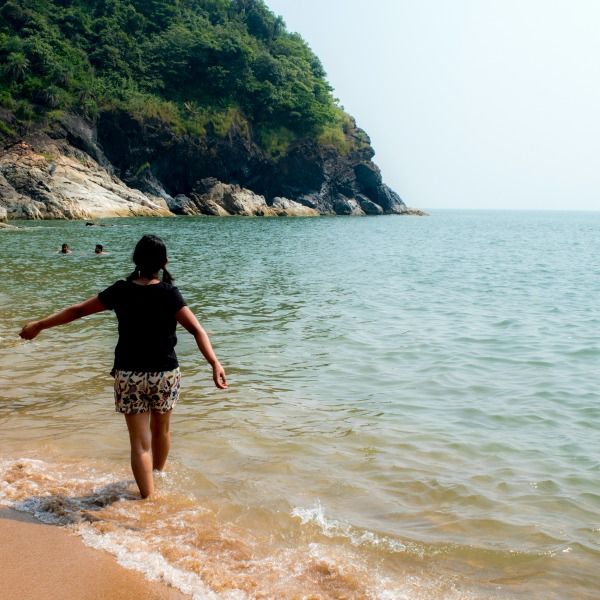 We had breakfast early to leave Hassan and leave for the first of the temples we were going to meet that day. After drinking the coconut water and eating an exquisite plate of idli, we continue to Halebid to see the temple of Hoysaleswara. Although it was left unfinished, the Hoysaleswara temple is the most outstanding example of Hoysala architecture.

This place of free access is no longer active, so it has a much more touristy character than we had previously visited. Many vendors of souvenirs and guides promise the traveler to tell a thousand and one curiosities of the place. It is the first thing we saw when getting out of the car. But once the door of the premises was crossed, peace returned.

This temple is nice as soon as we are in front of it. Well-tended gardens surround us. The dirt roads are clean and maintained. For once we could also enter a temple without shoes comfortably. Its interior is carved in black stone and outside its walls are covered with figures of gods and sages, animals and friezes where the life of the Hoysala rulers is told.

As a curiosity, we discovered that this temple has two front entrances in front of each of which is an altar. Outside we find some large sculptures before each door that indicate to whom the temple is dedicated. It is Nandi, the bull vehicle of the Shiva.

We walked and could see the wonderful and elaborate decoration of the entire perimeter of the temple. They tell the history of the Hoysala in those walls, and it will be strange for the traveler who does not stay enchanted watching them. In Halebid, we visit other minor temples too. One is the temple of Kedareswara that we found in repairs covered in scaffolding made with bamboo sticks. Even so, we discovered part of its elaborate decoration.

The last enclosure that we visited in this city corresponds to some Jain temples. In them obviously, some things change, like the sculptures of the interior that are different enough from those of the other temples. Both the exterior and the interior have worked columns and the whole is surrounded by well-tended gardens. No doubt if you are in Halebid and because of the closeness between the temples it is worth spending time with them all.

Our next destination was Belur, a town that houses one of the three main temples of the Hoysala period and the only one of them that is still active. When arriving at the city we find streets full of flowers, trucks adorned with garlands, adorned cars. And it was the first day of one of the most important holidays of the calendar: Dussehra (or also Dasara). There are fairs, processions and special offerings in the temples, to which people come with flowers and food. We were immediately encouraged and since we saw that everything was decorated I went down to buy a garland of flowers to decorate our car as well.

We parked next to the Channakeshava temple, which was built to commemorate the victory of the Hoysala against their Chola neighbors. We left the shoes in the car and crossed the entrance door formed under an elaborate gopuram. It is similar to those of Tamil Nadu but smaller than those and in this case without any type of painting. Only sculptures are part of the decoration. Once inside, we find ourselves in a large courtyard in the center of which is the temple and other smaller ones scattered here and there.

The first thing was to see the devotees and priests cross the courtyard with the image of the god on their shoulders to leave it in the central chamber of the temple. We follow them to the interior and there we live one of those special moments that the traveler adds during his journey. Columns with elaborate sculptures surrounded us. There were walls blackened by the smoke of candles and incense surrounded the altar.

Behind us began to play a music that accompanied the moment of prayer. The most special thing is that here no drums and bells sounded like in other places. Here the music came from a saxophone and I can assure you that I still have that moment engraved in my head. First out of respect, and second to not miss anything, I did not take any pictures.

The festive atmosphere was contagious. The people who passed by the temple were happy and they were noticeable. And we also because the ground did not burn. After suffering in some temples of Tamil Nadu walking around this place without getting burned was a pleasure. We could walk every corner calmly and comment on differences and similarities with many other Indian temples we had met on this and other trips.

The temple of Belur, despite being one, undoubtedly has the beauty of those we had seen years before in the north of India in Khajuraho. These were built precisely by the Chola dynasty (the one that, as I said above, won the Hoysala). The truth is that we liked the temples of Belur and Halebid so much that we had spent a lot of time in both of them.

I stay at a hotel and dine at the hotel restaurant, with paneer kofta, roti, and lassi to end the day.

After a continental breakfast at the hotel, we left for Mangalore, passing through places with beautiful landscapes. We arrive at 12.30. The accommodation is in the hotel with breakfast included. The room has seemed a little shabby, although on the Lonely Planet they put it well. I went to eat at the bar, and order biryani and pineapple juice. After lunch, I went to visit the chapel of St Aloysius College.

It is beautiful, with walls and ceilings covered with frescoes. Then I went to the Church of Our Lady of Miracles. At mid-afternoon, I have been with the driver to take me to the beach. It was beautiful, with a fine white sand, but I feel bad that it was very dirty. There I see the sunset. Upon returning to the hotel I went up to the rooftop restaurant, which has good views of the city and is not particularly expensive. I have the fruit salad and strawberry lassi.

At 8 o'clock in the morning, we left Mangalore to arrive at Hampi at 2 o'clock in the afternoon, stopping only where necessary. It was exhausting. We could have stopped in Chitradurga, which is interesting, but by the time I arrived in that city, I just wanted to continue and finish in Hampi at once. I stay in a guesthouse at night, with breakfast included in the restaurant. Here I eat coconut masala dosa and lassi. The room is fine, spacious and with air conditioning.

After having breakfast in the restaurant, I left for Sule Bazar. Then went down to the Virupaksha temple. From there I walked to the temple of Vittala. There is a decent walk but I wanted to walk a little after the sitting yesterday. I visited the temple, and the same entrance serves as the royal center and the museum. After the exit from the temple, my driver takes me by car to the real center, where I visited everything that can be visited.

I was sitting comfortably in the car with air conditioning and appreciated because it was tremendous heat. On the way back I stopped at the Krishna temple. Around 3 o'clock I finished the visits and I went to rest for a while at the hotel. Afterward, I ate my usual meal, of the coconut masala dosa I took the boat to cross to the other side of the river. There I could not stay long because the last boat left at 6.

So I could only take a short walk among rice fields, but it also seems a nice place to stay as there are several homestays. On the way back I saw the sunset. I went for a walk to the restaurant and had dinner again in with samosa, lassi and papaya juice.

After breakfast, at 9 o'clock we left for Aihole, arriving at 12. There we visit the Durga temple and Ladkhan temple. Then we continued towards Pattadakal to visit its set of temples. After that, we go to Badami. I stay in a hotel with breakfast included.

At 3 I went in the car to the caves, which I visited, along with the museum, and the Agastya lake. There are a couple of temples next to the lake but I have not wanted to see them. Between yesterday and today, I have enough. So I went to the crazy main street of Badami. I went to dinner near the hotel, because it has a dining room outside.

We leave Badami in the early morning and reach Gokarna at around 2 in the afternoon. I had never been to Gokarna, although this name has been revolving in my visions for a few years. I remember the palm trees slightly swaying. I have always seen them as female entities, that expanse of green that every time kisses my eyes and my soul.

After the short walk on the main beach, with backpacks, I arrive at a place where there are several huts that can be rented. The cabin is very different. It's dark but it's nice to stay in it. Yet in Gokarna, they are so, much more Spartan.

The day in Gokarna is marked by walks and long conversations. We go to take the holy water on the hill where is the temple of Rama. To get there we take a walk along the beach populated by people who take a bath, between a votive offering of flowers to the sea god and a walk in camel. There are also several Shiva Lingam of sand shaped by devotees.

We follow on to Om Beach and Paradise Beach. After some reflection, I decided to focus on the natural beauty of the place. The water in this beach is low near the shore and transparent. I meet very few people and I want to have the hut here. This is a typical tropical postcard beach, with slightly curved, thin-trunked palm trees creating a natural umbrella.

Paradise Beach resembles the Blue Lagoon beach as it is beautiful and wild. The only difference is that some hippies - or supposedly - have settled there with tents or hammocks to spend an Indian and wild stay at no cost. I go to Paradise Beach with all the troops. We travel a stretch by bus, I like a lot because of the breathtaking landscape that unwinds out the windows. We arrive near a small beach and from there we continue on foot for about twenty minutes, passing through nature.

During the bath, a large jellyfish is approaching us. I've never seen one like it and it fascinates me, it almost seems like an angelic being. And to think that if you touch it is able to infuse a lot of pain. We get to Kudle Beach, a beach with crystalline water populated mainly by Westerners.

Here, a lively alternative street market takes place at sunset and the sale is punctuated by the rhythm of the jam of the passing musicians who meet. There is a musical evening sheltered in the verandas of our huts, while the silky night falls on the palms and the ghosts of those who pass by here wander the beach.

After breakfast, at 9, we left for Palolem in Goa, passing through Ankola forest.