A day in Halebidu

It was decided mutually between four nomads to go on a short two day trip to some place on a summer weekend. The plan was only to go to Bylakuppae , a Tibetan settlement near Mysore in the state of Karnataka. But With two days in hand we thought of travelling to another place which is around mysore. It was halebid , where we travelled first. It was hot more than what we thought it would be. Saturday morning we set foot on the Mysore junction. That was only one of the very few times I saw railway tickets being checked meticulously. I remember last time I went to Mysore . If my memory serves me right it was during the summer in the year 2002-03. Back then it was not all this hot. It was pretty cool. I remember we did not leave the fans on during the night as it was really cold. Just a small interval of 11 years and the place had already been heated up. The difference was clearly evident.I never waste time on finding fancy hotels or air conditioned shelter whenever I backpack.That is one of the reasons I always stress on the fact that anyone can travel but only a few could back- pack. I made sure my travel had always been less luxurious in the past and always wanted it to be that way. I was glad that the others in the group were in par with me. With no intentions of wasting time, We broke our fast in the railway canteen just outside the station which soon appeared to be a bad choice.The food which was served was so close to ridiculous. After struggling with the food, we quickly walked out of the station. The auto stand unlikely yet surprisingly was so well organised. All the autos were queued up in a single line.The drivers had no chance of quarreling as there was one pre-paid booking office allocating the ride to the passengers. We boarded the ride which took us to the mysore bus terminus from where we had to get a bus to Hassan.As we were walking inside the bus stand , we saw a bus coming out with a conductor on the steps shouting 'hassan-halebidu,beluru' and clinging on to the bus with one hand. We got it into the bus and We already knew that it was going to be a 3 hour long journey to hassan. I was hoping to see some interesting scenes inside the bus but was totally disappointed with an empty bus. Kumary and Selva the other two nomads almost talked through the whole 3 hour journey. Sugee was quietly reading a book which was wrapped with a news paper which clearly suggested that she is an organised lady.I also tried to turn few pages of a book I took with me but I eventually was beat by the lack of sleep the previous night. It was only when i woke up after two hours that I felt Selva and Kumary were still discussing while Sughee was so much in to the book.I also joined the discussion with Kumary and Selva for the rest of the journey. Three hours passed by in a jiffy and we reached Hassan just past 12 noon. From there we had to take another bus to Halebidu. We waited close to 30 mins and the bus arrived. Before even we picked our backpacks, there was already a cluster of people on both the doors of the bus blocking each other's way not realizing the fact that no one had actually entered the bus. Somehow we managed some space to make ourselves seated at the back.As usual Kumary and Selva started talking, this time Sugee also joined them. It was almost 30 mins, me and the little one were seriously talking though both of us did not understand what each other said. The bus was brushing the dust on the road , and suddenly it stopped in such a way that we almost banged our heads on to the front seat. It was because an old man carrying a big bunch of curry leaves waved his hands. He literally threw that big bunch in to the bus and stepped on top of it. The conductor and the old man got in to a firing conversation because people are not supposed to take-in big luggage to the bus. People around cooled the conductor down and by the time the issue was settled, we already reached Halebidu.

When we got out of the bus, It was like setting foot on to a furnace.It was very dry.There was a temple just opposite the bus stand. We acquired the details about that temple and the other two temples from a tea seller from the shop where we had tea. Not wasting much of time we went in to the temple and took our own corners to admire. The guide explained us about the sides of the temple and certain other distinct aspects of the hoysala architecture. The first difference one would notice seeing the Hoysala architecture is the star shaped base of all the temples. Hoysala architecture is unique in its own way , especially given the fact that all their temples were built based on the shape of a star. They believed that by doing so they can manage space wisely and accommodate more structures. The sides of the temple walls actually contain 11 sections , that are configured with 11 types of people lived those days. They had shaped up warriors,musicians, comedians, animals, Gods, stories etc. This ruined sculpture of warriors caught my attention some how. It was almost 4 when we came out of the first temple. There was a small hotel on a basement just opposite to the temple where we had the so-called lunch. 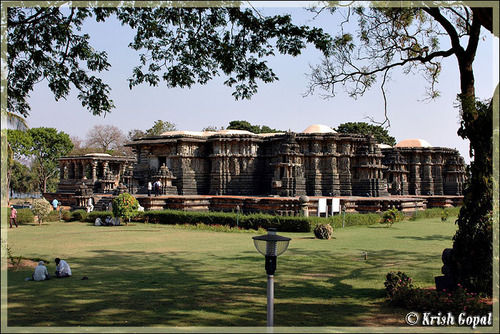 Soon after the lunch we started walking towards the Jain temple ,which was at a 10 mins walking distance. I somehow liked the Jain temple better than the other one because there was absolute silence and less people. Roof of the temple was supported by smoothly carved pillars. The pillars were made of soft-stones and nicely polished. 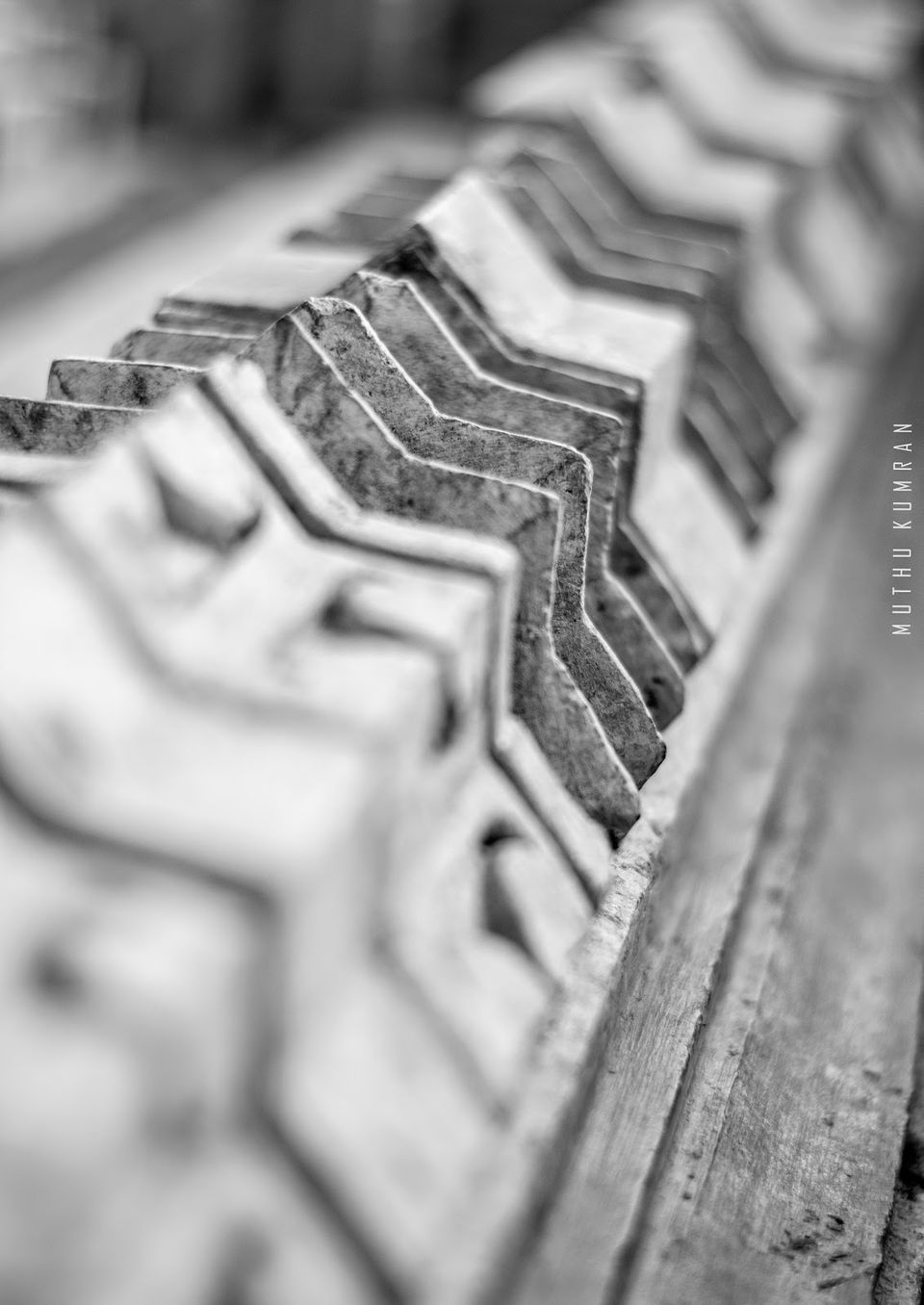 So we took a bus from Halebid which will take us to Hassan . We reached Hassan in an hour and from there we had to take another bus to Bylakuppae. It was a 3 hours long journey to Bylakuppae on some really tough roads. All our spines took a toll on the ride. It was eleven by the time we reached Bylakuppae. There was a sole tea shop just opposite to the bus terminus . We sipped a quick tea and walked to the lodge where we had already spoken on our stay. It was not very far from the tea shop. We got to the room , refreshed ourselves and quickly and made it to bed as we had to wake up early the next day. 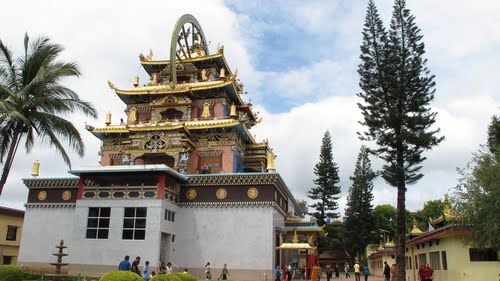 As planned we started early and made it to the golden temple. Spent more than 2 hours sitting in front of the giant Buddha statues. Later , we took a walk to a nearby lake and took a power nap on the benches that were lying on its shores. 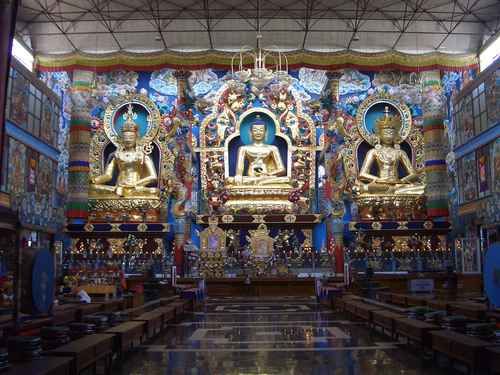