Kathmandu Top Attractions - My trip to the City of Temples

I frankly admit that the impression that I had formed of Kathmandu, until recently, was solely on the basis of the scenes of some of the Hindi movies (such as Hare Rama Hare Krishna, and more recently Baby) and Indiana Jones movies that I had seen. That was before we (husband and me) packed off for a short trip, leaving our cat in the safe custody of my daughter, who has come home on vacation. The destination obviously was Kathmandu - an offbeat place but well suited for a short summer getaway, especially for heritage lovers like me.

Taking a morning flight from Mumbai, we landed in Kathmandu by noon. It had rained in the morning, due to which the temperature had dropped and the weather had turned pleasant. A huge poster of Deepika Padukone with an Oppo phone greeted us at the Tribhuvan International airport, where I was expecting to see posters of people in their traditional Nepali costumes. Repair work was being carried on at the airport escalators, which made me a little sceptical while using those.

The hotel Annapurna was not very far away and we reached the hotel in half an hour. While entering, we could see the Narayan Hiti Palace Museum, which was at a five minutes walking distance from the hotel gate. We decided to go there after we had rested for some time.

However, on reaching the Narayan Hiti Palace Museum, we found that it was closed. So we kept walking towards the Thamel shopping area. I saw that most of the people on the road had covered their nose with a dust mask, which I later found is a common practice all over Kathmandu.

Garden of Dreams - A historic garden in Kathmandu

On the junction at the start of Thamel, I spotted a café and we decided to go in. As we entered, we saw that there was a garden adjoining the café, for which we had to purchase entry tickets. What we found inside was a serene, green, beautifully landscaped garden, with a lotus pond, colourful flowers, trees, and fountains -the garden of dreams.

We came to know that the garden was originally created in 1920, and was the most sophisticated private garden of its time. After the death of its owner Kaiser Shamsher Rana, the garden was handed over to the Government of Nepal. Over the decades, it had deteriorated due to lack of maintenance, but it was later restored over the period of seven years from 2000 to 2007.

A cafe designed in European style was overlooking the garden. We had light snacks and tea in the garden café and then strolled leisurely in the oasis of greenery that surrounded us, appreciating the variety of flowers and seeing the squirrels running around. By the time we left the garden and the café, we had spent a couple of hours and felt completely rejuvenated.

From the road, we took a taxi and headed towards Durbar Square

Check out here to see pictures of Garden of Dreams.

Right at the entrance, we saw a flea market, where trinkets, jewellery, purses etc. were being sold by the local vendors. It was saddening to see that the place where the city's kings were once crowned, bore the look of a lost legacy. The effects of the devastation caused by the earthquake in 2015 are still visible as many of the sculptures are in the ruined condition and the monuments are supported with props, while the renovation work continues at the UNESCO World Heritage site. 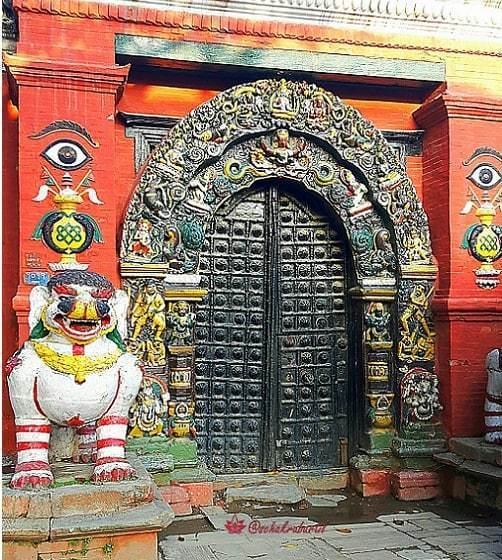 We walked through the squares, looking the crumbling temples, palace structures. The presence of the statue of Hanuman at the entrance of the royal palace gave it the name Hanuman Dhoka. A building called Kasthamandap was the first building to be constructed in Kathmandu. Many people were hanging around and sitting on the steps and the platforms of the temples. I saw a sadhu in a saffron garb coming towards us, his forehead adorned with sandalwood dots. So colourful was his face painting that I was tempted to click him. My husband offered him a ten rupee note and asked if we could take his picture. He willingly obliged and posed for the clicks. 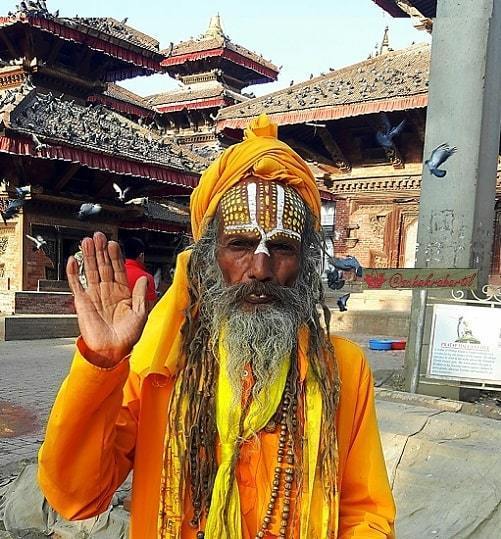 Next, I said that I would click a selfie with the sadhu, but this time my husband pulled me away. We came across a large deity of the God Kalbhairav in the open. From the design of the structures and the intricate carvings on the ruins, we could make out how beautiful the place would have been in its prime.

After spending an hour or more in the square, we went back to the hotel, where we enjoyed a sumptuous dinner with a live music show. Early next morning we would leave for Pashupatinath, which according to the local residents is the first place to visit when you are in Nepal.

Pashupatinath - The most sacred Shiva temple

At 7 AM next morning, one of my husband's friend Mr RK Thakur came to meet us. He insisted that his driver Birbal would take us around Kathmandu in his vehicle. By 7.30 AM, we started for Pashupatinath, which is considered to be the oldest and the most sacred Hindu Shiva temple in the world.

In front of the temple is the street lined with shops selling religious stuff. Birbal took us to a shop from where we purchased some flowers garlands and offerings and took off our shoes before we entered the temple complex. The entrance to Pashupatinath was flocked with devotees. Only Hindus are allowed inside the temple.

The door opens to a courtyard at the centre of which is the square shaped ancient pagoda temple. It has four entrance doors in four directions, which are opened for the devotees to catch a glimpse of the God. A huge statue of Nandi bull is built facing the main temple. As photography is prohibited inside the temple courtyard, many people were seen clicking at the entrance. See more pictures of Pashupatinath here.

Inside the temple, there was a buzz of activities. We lined up for the darshan, as the priests started opening up the four gates located on the four sides of the temple. Incidentally, the priests of the temple happen to be from India. Monkeys were perched all over the temple but they were not troubling the pilgrims. Standing in one of the most ancient temples and making offerings was a rare experience for us.

After making the offerings, we went to the other side of the temple, where river Bagmati was flowing by. Bagmati is considered as a very sacred river though it is also very polluted. Across the river are a series of small shelters from the medieval times, which were mostly occupied by the yogis, who moved around dressed in saffron and their face smeared with ash. While walking over to the other side, we saw funeral pyres burning as cremations were being performed on the ghat along the river. It made us contemplate on the notions of life and death.

From Pashupatinath, we went to the next UNESCO World Heritage site of Boudhanath Stupa. This is the largest stupa in Nepal and supposed to be the holiest Tibetan Buddhist temple outside Tibet.

This heritage zone, believed to have been built in the 14th century has been restored after the earthquake with donations from Buddhist groups and help from local volunteers.

Over the sprawling white stupa, is a gilded square tower with 13 steps that represent the Buddhist path to enlightenment. Below these steps are the omnipresent Buddha eyes gazing at the city from all four sides. Some school children had come with their teachers to visit the stupa. They rejoiced in spinning the prayer wheels.

As we did the circumnavigation of the stupa, I watched the colourful prayer flags flying around the stupa against the bright blue sky. Here I was in a space so very different from mine, relishing the visuals, sounds, and vibes.

Within the Boudhanath complex, there were a number of restaurants. We had Nepali thali for lunch, sitting at the open part of a restaurant from where we had a direct view of the stupa.

We went back to the hotel for some rest before we started off for the other heritage sites.

The vivid imagery of the sites is still playing in my mind and I wanted to chronicle the trip before the memories start fading. Yet, I shall stop here to continue with the remaining part of the trip in the next part. Please stay tuned. I have been posting the pictures on Instagram. If interested, you may want to have a look here.