Kaluk: A Trip To Rediscover Home. 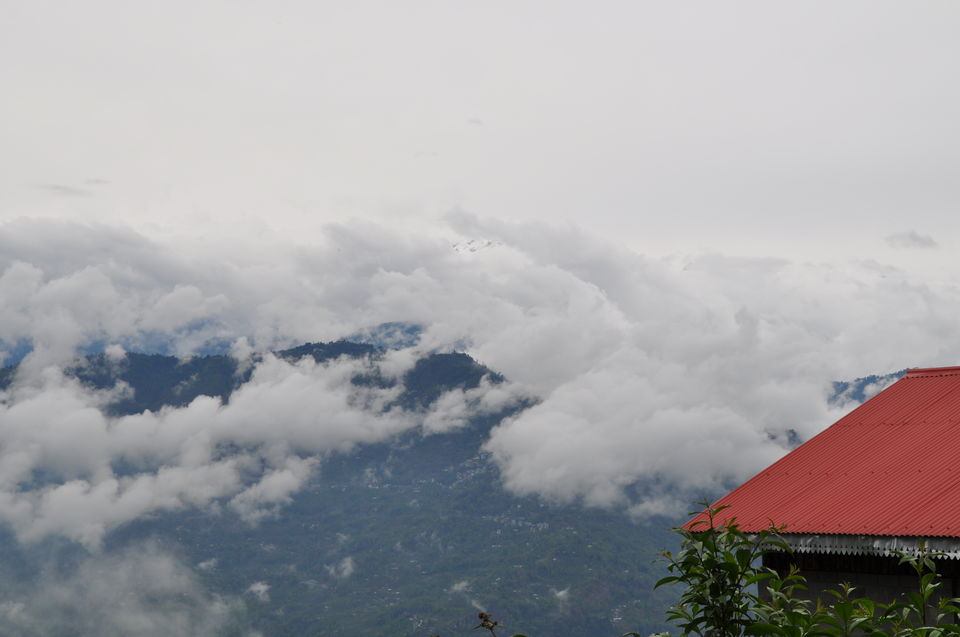 The year was 2012. I had completed my tenth standard board exams, and was exhausted. The only way to unwind after months and months of stress was to, of course, visit the hills, even if it were for a few days. Our destination was Kaluk, West Sikkim. For what felt like the first time in months, I breathed contently in the presence of the mighty green Himalayas that stood before me. I was glad to be away from the mundane grey walls of my city, glad to be away from my city of Kolkata.

Mountains have been a constant influence in my life. Ever since I was a kid, I remember loving the hills as if it were a part of my heart. Be it the roads that echoed the content tune of the soft rustling leaves, the distant music of unnamed birds or the usual song of the cicadas -- all were dear to me.

More than all of that, however, I've loved the people who are fortunate enough to call the hills their home. I envied the fact that they could continue gazing at the pristine white peaks and breathe the fresh mountain air, while I had to return to the boring plains I called home.

It was uncharacteristically cloudy when we reached our destination. The people at our resort told us that it had been this way for the past few days, no rain- just an overcast sky and an overall gloomy atmosphere. From an early age, I had learnt to love the hills the way they were- be it in sunshine or in rain.

It didn't quite bother me that the sun wasn't smiling down on us because I knew, like every time, Kanchenjunga would show herself to us. Never did she ever disappoint us in this regard. With this hope, early morning the next day, we left our hotel to have a look around the tourist spots.

The way up to this lake was beautiful, lined with trees. The dense trees and the grey sky, coupled with the ominously named lake, made for quite a thrill. we were told that the Poison Lake was once the only source of water in Rinchenpong. When the British attacked Sikkim in the nineteenth century, the locals had poisoned the lake. It is said that many British soldiers were killed after drinking the poisonous water, which later compelled the British forces to retreat. While the stories were interesting, there was no trace of water in the dried up land that once used to be a lake. 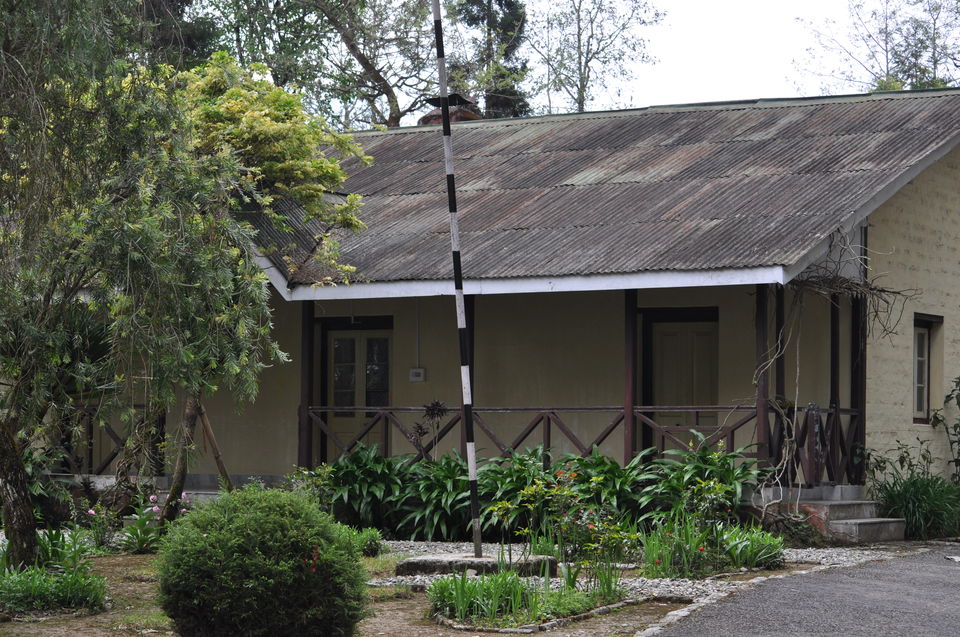 Close to the Poison Lake is this bungalow. Nestled in a quiet part of the hill surrounded by trees, our guide told us that this bungalow was, for a short time, home to Rabindranath Tagore. 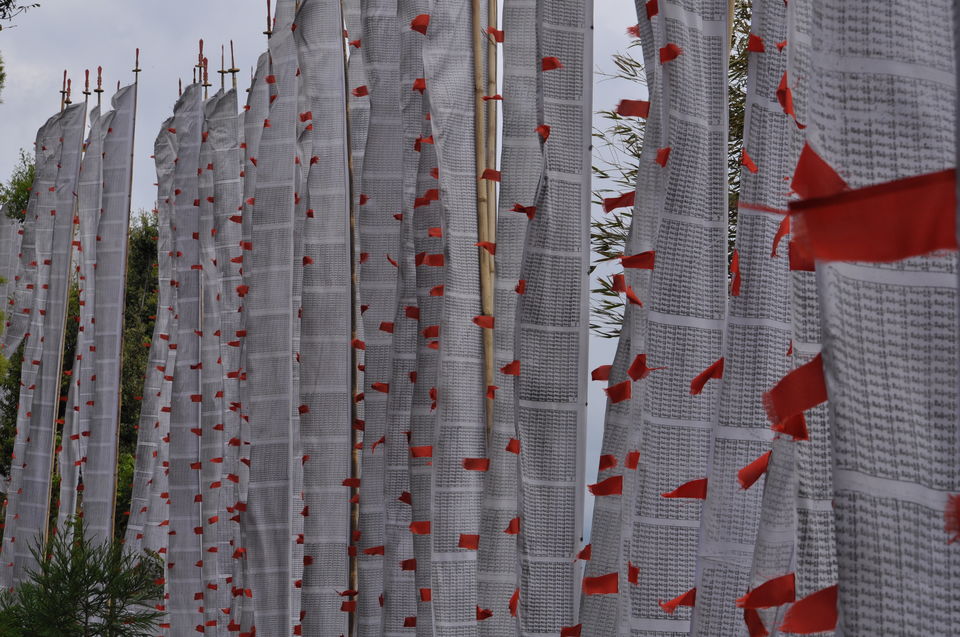 This is one of the oldest monasteries of Sikkim, starting with about 100 lamas. I never really knew what to do in monasteries, but this time I was determined to pray for a sight of the Kanchenjunga. Colourful prayer flags were positioned on either side of the way to the monastery. When we reached the place, we were told the monastery was closed for some reason.

When we returned later that morning, the sun shone better, yet a thick white cloud hid the pristine Kanchenjunga we desired to see. After exploring the resort grounds for a while, I sat on a bench overlooking the green hills near our cottage. Enveloped by the chilly mountain air, I lost myself in the various sights and sounds of the hills. The wind passing through thick trees, the chorus of birds, the distant cry of a person and the soft low hum of a Buddhist chant. It was just me and the hills.

The sound of shuffling feet beside me made me tear my gaze away from the valley down below. Right next to me stood a young girl, probably as old as I was, looking at me in mild curiosity but with a smile. I smiled back and motioned for her to sit next to me. She had a long face and dark beady eyes. Her old, pink dress went down to her knees and she wore a slightly torn navy blue sweater.

"Where are you from, Didi?" She asked me in broken Hindi.

As soon as I uttered those words, her eyes lit up in pure joy. "It is a huge place, isn't it? Do you see a lot of cars there? And how tall are the buildings?"

Her enthusiasm amused me as I told her how huge my city was, the annoying number of cars that honked incessantly, and how buildings grew like wild mushrooms without any view of the open sky. The girl listened to it all with wonder in her eyes.

By the time it was afternoon, the girl whom I now knew was called Kaushalya, had asked me about my family and in return told me about hers. She was the eldest, with a sister in the fourth standard and a two year old brother. Her mother was occupied with her young brother most of the time, while she and her father worked at the resort. Kaushalya told me that she used to go to school till she was ten, after which she started working to support her family.

"I have high hopes for my sister, though," she added proudly. "She has a bright future ahead. She's really good in her studies."

Our topic of conversation was steered back to Kolkata by Kaushalya. She asked me one question after another, and was lost in my mostly mundane details of my city.

"Kolkata sounds extraordinary!" Her declaration surprised me. Even after the dreary picture I had painted of my city, she found it beautiful.

"I think your home is extraordinary," I tried to reason with her. I told her how fortunate she was to be born in a place as beautiful as this, where she could see the Kanchenjunga any time she wanted. Where there was hardly any pollution, and where the weather was always pleasant. However, none of my points convinced her. To her, the beauty of the open mountains was nothing compared to the modern city.

The next day when we met again, Kaushalya asked me if I wanted to walk up with her to Kaluk market. The way up to the market was quite steep, and I was breathless after a little while. While climbing up, she asked me how I liked Kaluk. "It's a wonderful place," I began, "my only regret is that I didn't see Kanchenjunga as of now and we're leaving tomorrow."

"Don't worry," she smiled warmly. "You will see it tomorrow, I promise!"

Kaluk market isn't exactly a market. It has about five or six shops selling regular items like bangles, sweaters, books and copies, umbrellas and other such items. We walked past them, the shopkeepers smiling at us and occassionally greeting Kaushalya. A little later, she asked me about markets in Kolkata. I told her about the markets and explained the concept of shopping malls to her. This new information blew her mind and she asked a million new questions.

"Kolkata is such a wonderful place! Will you take me to Kolkata with you?" She blurted out, and immediately turned away, apologizing for such a request. "I am so sorry," she smiled sheepishly, "I cannot make such requests. Not when I have my little siblings depending on me. I belong here, you know? Moreover, I will just be a burden to you. I am truly sorry."

Kaushalya's deep understanding of the responsibilitites on her shoulders made me silent and wonder what a truly matured girl she was. How a young girl such as herself did not have the opportunity to think like one, how she could only dream but keep her feet grounded to reality.

It was dark by the time we returned to the resort and Kaushalya's father was waiting for her. Joining him almost immediately, Kaushalya waved me a goodbye, promising to see me before I left the next day.

The next day we were greeted by the breath-taking view of Kanchenjunga. There she stood in all her glory, all the clouds having mysteriously disappeared. After clicking thousands of pictures, we were ready to leave.

However, there was no sight of Kaushalya. I asked around for her, and our kind manager told me that he hadn't seen her. As our car left the resort premises, I looked around for Kaushalya, disheartened that I couldn't at least click a picture with her.

For the majority of the flight back home, I slept. The flight attendant's announcement that Kolkata was near, woke me up. Glancing down at my congested city, I felt an immense sorrow. This time, not because I was back to my city leaving the hills behind, but because of a young girl who dreamed of this view.

And for a second, my dreary city did not look all grey to me. For a second, it looked gorgeous and as colourful as a young girl in the corner of the mountains imagined it to be. 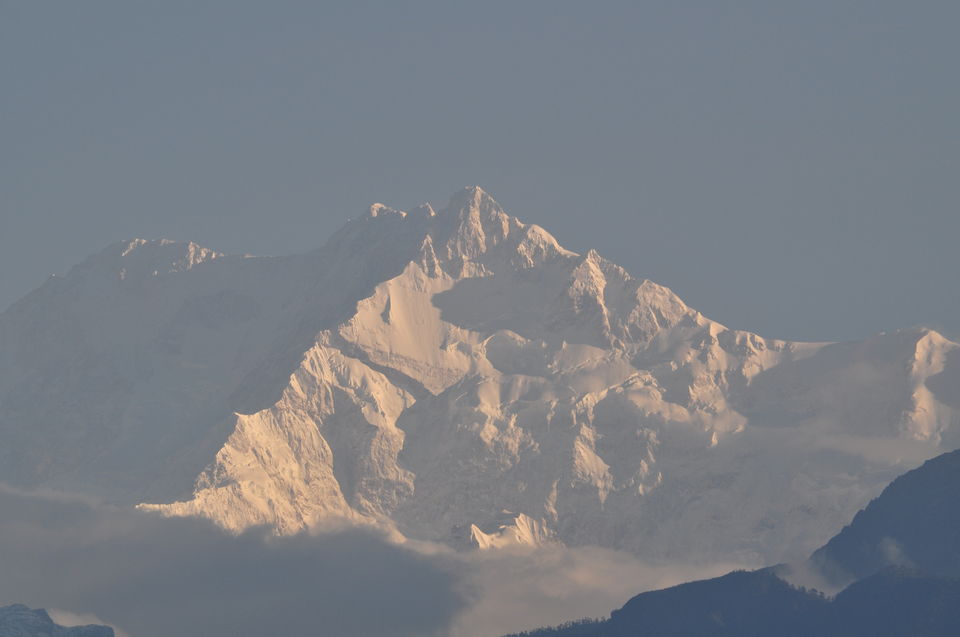