An Extended Weekend in Lansdowne

Travelling from Noida to Greater Noida everyday for college, the daily metro wars, the supersonic Delhi lifestyle, everything in Delhi incites a person to just escape the city every now and then. I shifted to Delhi for my college just 7 months back and being a travel enthusiast, I had to take at least one trip to escape the craziness of the city. One fine weekend me and a friend of mine decided to search the internet for a weekend getaway anywhere close to Delhi. Uttarakhand being the closest to the city, we narrowed down to 3 destinations out of which we chose Lansdowne.

The train reached Kotdwara at 6 in the morning. Kotdwara or Kotdwar is a town and tahsil in the Pauri Garhwal district of Uttarakhand at an elevation of 1,490 ft from sea level. It is situated in the south-western part of the state and is one of the main entrance points in the state of Uttarakhand. Kotdwara station was one of the most peaceful stations I had ever come across. The hills visible from a distance and the sound of the river water rushing gave the early morning chill a cherry on the top. We freshened up at the station and went out to explore the Kotdwara market. After a glorious paratha breakfast at a local dhaba, we took the only bus that goes to Lansdowne from Kotdwara at 8. The bus ride was the steepest I had ever seen. From a 1,490 ft elevated Kotdwara, the bus took us to the 5,600 ft Lansdowne in an hour and a half.

The bus reached Lansdowne at 9:30. Lansdowne is a really small 6 kms. Cantonment town in the Pauri Garhwal District elevated to 5,600 ft from sea level.

Day 1 2nd April : We got to Lansdowne without any prior reservations thinking how crowded could a small hill station be, moreover my friend being an army brat would have arranged for an army accommodation easily so we straight away walked to the army mess reception (like we own it) and told them we needed a room for 2 nights. It came to us as a shock that the small little hill station was crowded like hell and there wasn't any accommodation available. We tried everything. Requesting, making his dad talk to the reception guys, even making his dad talk to the station commander but no luck. Then the moment we decided to step out and look for accommodation outside, the reception received a call for postponing one of the reservations for that day to the next day. So we got the room for one night but we still didn't have a place to stay for the next night so we checked in to the room, had some food, slept for a while and in the evening, left for the market to look for an accommodation for the next night. We enquired everywhere but each and every hotel was jam-packed and the hotels which had any accommodation left where charging a fortune. After a long room hunting session, we agreed to stay at a local dhaba for the night. So when the accommodation part was sorted, we decided to visit the Kaleshwar Temple. The serenity of the small cantonment temple was out of the world. The peaceful environment made us sit there for around an hour and a half. On our way back to the mess, we had some food, roamed around in the market, fetched some chips and coke for the room. After a long tiring day we slept off early to get up in the morning and check out early as the postponed reservation was for the following morning at 9:00.

Day 2 3rd April : We got up early, packed all our stuff and were ready to check out when the reception again received a call from the same source saying that they wanted to cancel the reservation. So now we had the room to us for that day as well. We unpacked everything, had breakfast in the mess , loaded a full day trekking supply in a rucksack and headed for the hills. Our first stop was Bhulla Taal, a beautiful lake with boating, a fantastic cafe and an amazing view as its add-ons. Sitting at the cafe, we decided to just choose a hill and start climbing. So after a small tea and chilly chicken halt at Bhulla Taal, we started climbing a random hill. Around half an hour into the trek, we reached a plateau which was apparently a playground for the locals playing cricket there. So we joined them and played cricket for around 2 hours. Surprisingly we weren't tired and all. We continued our trek for around an hour more and coincidently reached St. Mary's Church. It was a small church which was unfortunately closed that day. Opposite to the church was a watch point. Along the watch point was a really less travelled trail where we found a cliff rock with one of the best views in Lansdowne. After relaxing there for around 45 minutes, we headed to Tip n Top,  the highest point in Lansdowne. The trek to tip n top took us around half an hour from St. Mary's Church n trust me, it was worth it. The view from there was breathtaking. So 15 minutes and around 10 photographs later, we headed back down for the market. But obviously, the first-time-trekkers in us didn't let us go back from the normal road. All thanks to the smartphone GPS these days, we looked up the market and wherever we were standing, started trekking down in the market direction. After 2 hours and a series of beautiful view points, we reached the market at around 7. By that time we were hungry as hell. We went to this north Indian restaurant, Zaika and had one of the greatest chicken burgers. After we were done, we realized that we were still hungry so we went and had soup at The Tipsy Cafe. Went back to the room, which was again a 15-20 minutes walk uphill as soon as we reached, we crashed on the bed.

Day 3 4th April : Got up the next morning, packed up everything, checked out and left at around 11:30. Had breakfast in the market and went to see the Lansdowne Army Museum and War Memorial. It was one of the biggest museums I have seen. It exhibited books with the whole Garhwal history and uniforms, guns and ammunition of the Garhwal Rifles. Outside the museum was the huge marching assembly ground overlooking an amazing valley. We requested the guards to keep our bags in the generator room and we went off to the watch point just outside the museum premises which was on a cliff on about a 50 degree angled steep hill. Our whole point of getting rid of the bags was to go for one last trek, so we started trekking down the cliff. We were so engrossed in trekking that we almost missed the only bus that goes from Lansdowne to Kotdwara. Climbed back from a different route, reached the backside of the museum which was a actually an army training ground. Who would end up in an army training ground, see a rappelling-rock climbing set up and resist the urge to climb? I guess nobody. So we spent good half an hour there, rushed back to the museum, picked up our bags and ran to the bus. The bus took us back to the Kotdwara railway station from where we were back from where we started, Delhi. 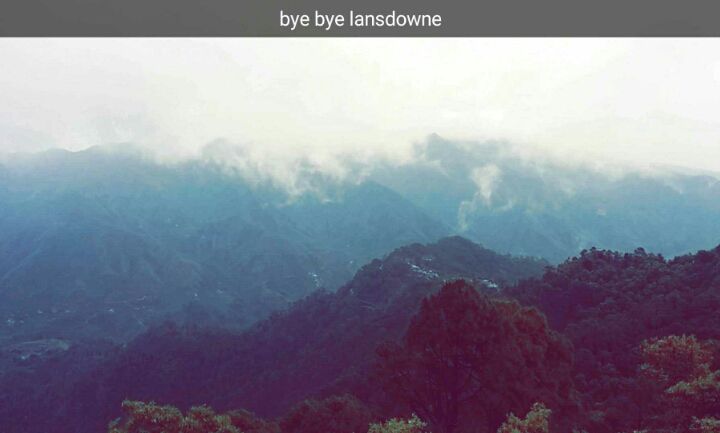