If you don’t value what you have,

You are sure to lose it

Belapur fort, in Killa Gaothan, the village of forts, which fought three battles successfully is an example of how history remains neglected. It’s been five years in Navi Mumbai and I never thought of visiting Belapur Fort. Many residents are unaware of it’s existence, and those who did, never really cared to discover. It was in my check-list for about a month, and finally ticked

The fort is not in a very good condition, but the journey in discovering it was beautiful, surrounded by nature, at its peak because of the monsoon.

Forts are fascinating for the history attached to it. Like, every fort, The Belapur Fort has a story too. Not much is available online though.

It was built in 1560-1570 by the Siddis of Janjira, after they wrested control of the area from the Portuguese. The Portuguese recaptured the fort in 1682 and added in their territory, the regions controlled by the Siddis, near Belapur (at that time known as Shabaz). In 1733, the Marathas led by Chimnaji Appa wrested control of the fort from the Portuguese. He had made a vow that if it were to be successfully recaptured from the Portuguese, he would place a garland of beli leaves in a nearby Amruthaishwar temple, and after the victory the fort was renamed as Belapur Fort. The Marathas ruled the area until June 23, 1817, when it was captured by Captain Charles Gray of the British East India Company.

The British partially destroyed the fort in under their policy of razing any Maratha stronghold in the area. During its better days, the fort stationed four companies each of 180 men, and 14 guns ranging from four to 12 pounds in weight. An underground tunnel is also supposed to exist, which many locals believe connects it to Gharapuri Island, the site of the Elephanta Caves.

It was an unplanned visit. Instead of sitting and lazing in a cafe, one afternoon my friend and I decided to “find” the Belapur Fort. We started with locating it on Google Maps first. We thought it would be pretty easy to find it, but on the way there were many diversions and distractions.

We took an auto from Belapur station to Kille Junction. I read other blogs before, so was aware about the landmark. I also asked the driver in curiosity whether he was aware about the actual Killa, but he said it must be destroyed and doesn’t know much. He dropped us near Croma on the main road, from there we continued using Maps. After walking few metres, we saw a fort-like structure, which wasn’t located on the Maps too. It was barely visible, being almost on the road junction too! 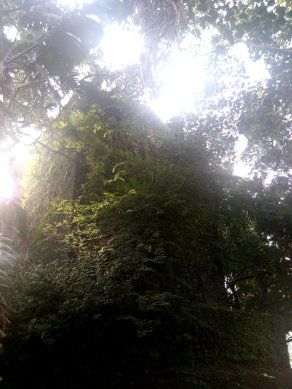 The other side of it, towards the entrance was better, as it is cleaner and attached with a small park. 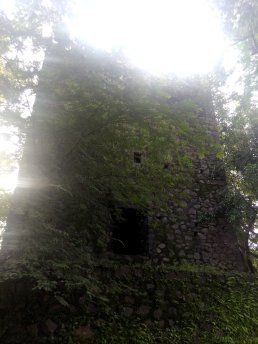 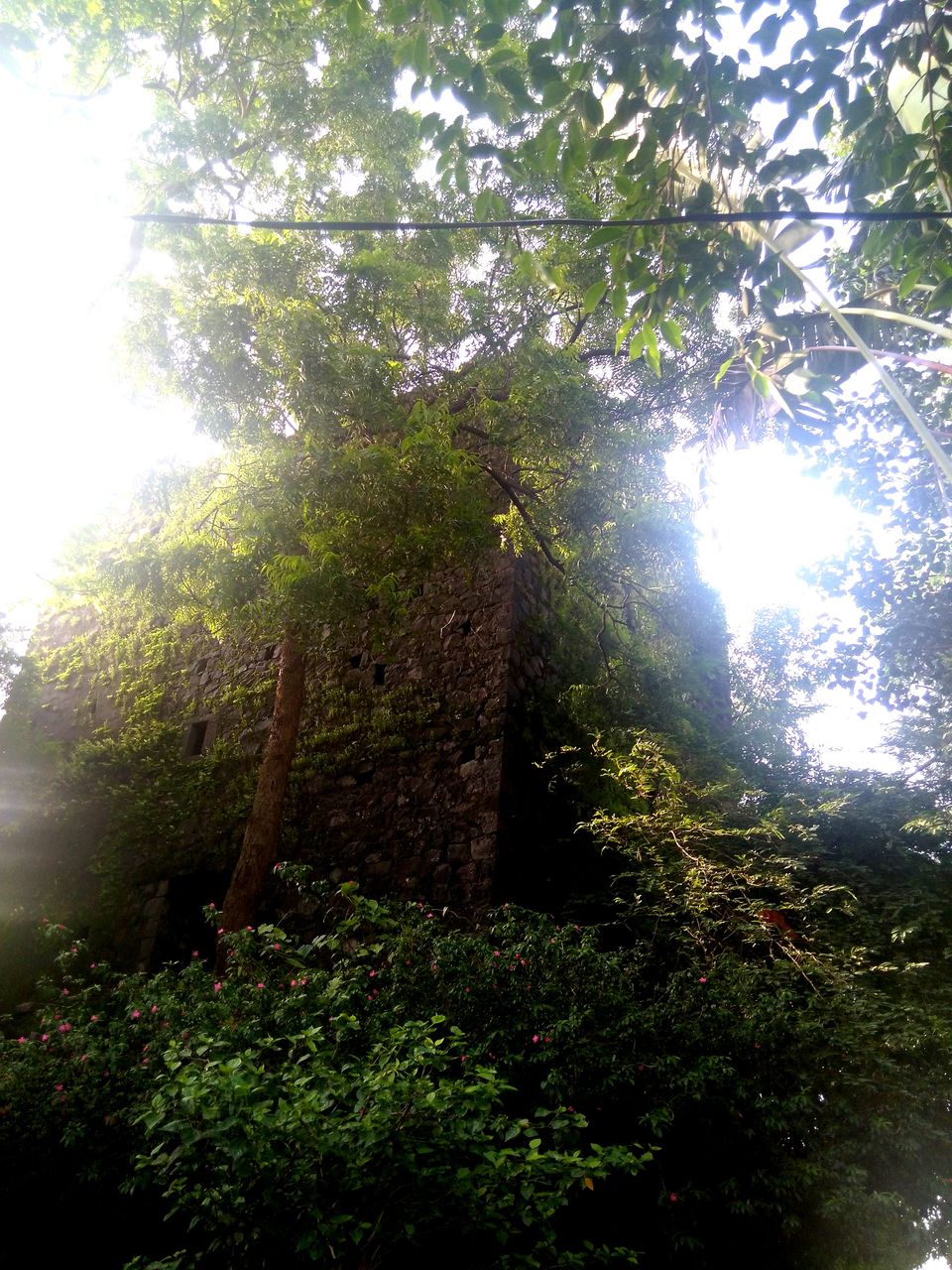 We wanted to discover more, but were a little reluctant as it was totally deserted and seemed a little spooky. After asking the gardener there, we went ahead, there are a few stairs which lead to a watching area with few windows-like structures.

Old trees guard the fort, and also there is fresh green growth too, because of the rains. Only one floor was accessible. Trying to capture from all corners and views, we were taking pictures from all possible angles, when one traffic policeman warned us about snakes present there. We were lucky to be safe, as I read later that once it was full of snakes !!

My friend believed that this was the only part of fort left, but I wanted to discover more. I wanted to follow the map, and find the real one. As we walked further, we came across a diversion,one was going straight ; the other road was narrow, and seemed would not lead us to the destination.

There was also a board “Kille Belapur” and showed arrows, which were pointing to an old house !! We got confused, we even asked people, some were unaware, others didn’t wanted to answer !! 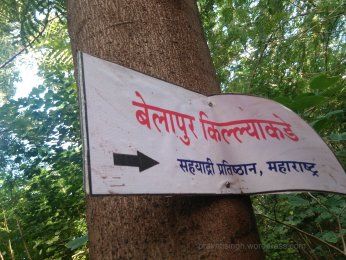 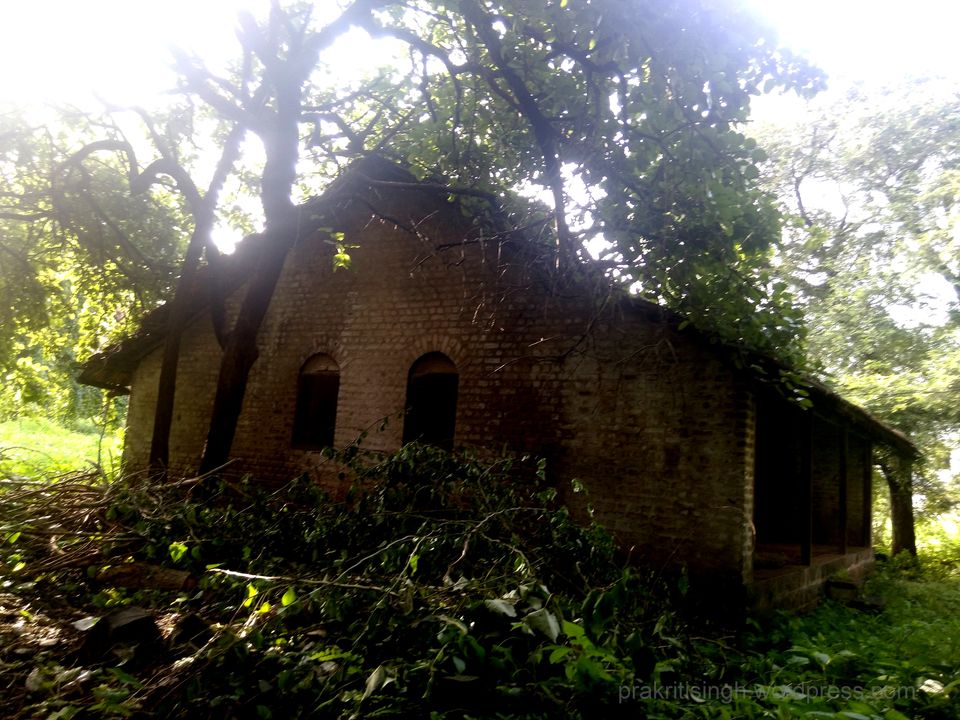 One diversion, and we got distracted. The Maps showed Sea Coast 1, and Sea Coast 2, so we decided to see the sea coast first. We chose the wider road and not the road less traveled.

As we followed the map towards the sea coast, we realized we are in a village –Killa Gaothan ! We could see small houses, few cowsheds and grazing fields too. This is actually the base village of the fort, hence everywhere one can see fort like structures. There are also some good societies, which I guess the government bought the land from villagers for development purposes. The original villagers speak some dialect of Hindi or Marathi. On the way, one boy suggested to visit one Devi temple, he also informed that earlier, only some particular caste was allowed to visit it. We were not sure, whether we would be able to go inside, still tried. Small stairs lead to the temple. I was wondering, if this is the same,  Amruthaishwar temple, where  Chimnaji Appa placed a garland of beli leaves on victory. 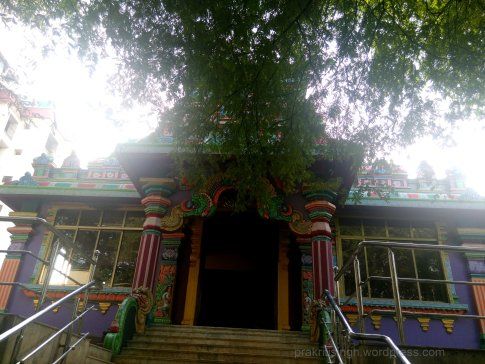 Then we continued towards the sea-coast. Finally we reached the sea coast. 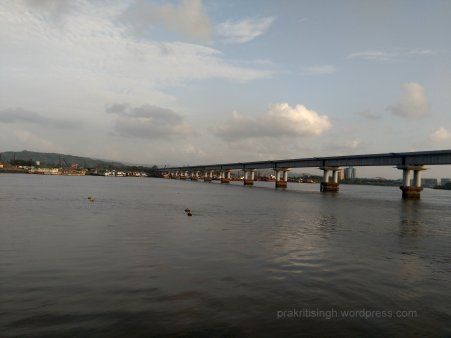 We could see the Belapur creek bridge from there. The view was amazing, the silence and calmness was very soothing. Away from the constant noise pollution, the area has a charm of its own, even though it is surrounded by abandoned creek marine boats. 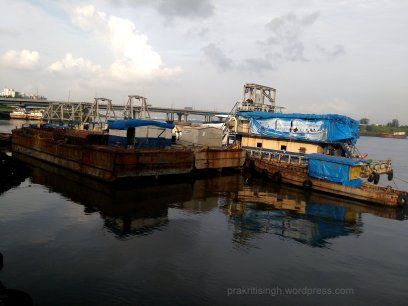 We were there for sometime, and realized that still haven’t reached our destination.

Our cell phone batteries were low, so we had to disable data, no more relying on Maps. On our way back, we stopped near one beautiful society, and asked the watchman there. He told us that the fort, was on the other road. The road which we assumed would lead to nowhere!

We went all the way back, reached the diversion point, and took the other road.

After walking few metres, the view totally changed. Long empty road, with trees forming a beautiful canopy of leaves. There was just one person within my line of sight, he was brisk walking. He seemed familiar with the road. We were walking slowly, getting lost in nature, step by step. 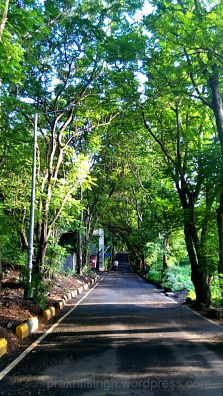 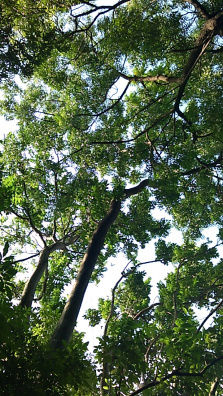 Half-way, the same man who was brisk walking was returning. We enquired about the fort, he said there is nothing like that !! Still we could not give up after all this. We continued. And finally we saw the orange flag, showing the direction. I wonder how come that man never noticed it. 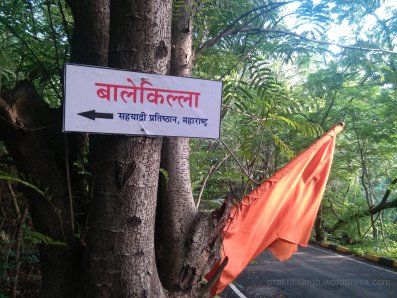 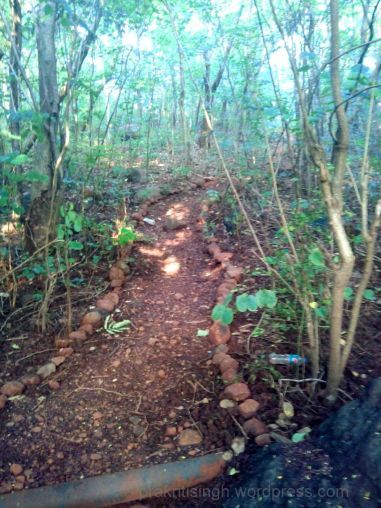 There was a narrow path made using bricks. We followed it, and reached, the remaining Belapur Fort. With the fort which is left today, makes it hard to believe it’s history . No one can believe it fought three battles, and stationed four companies ! There is just one opening we could find, and probably the only one remaining. It seemed beautiful, even though in dilapidated condition. 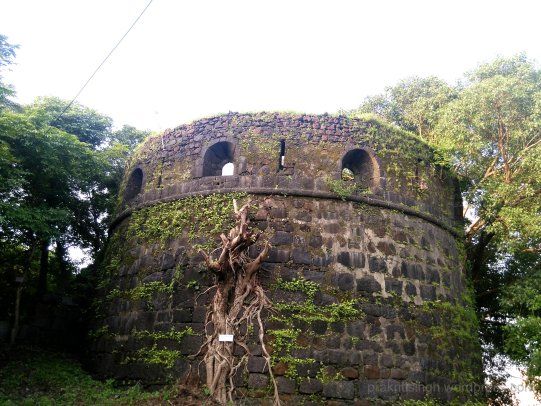 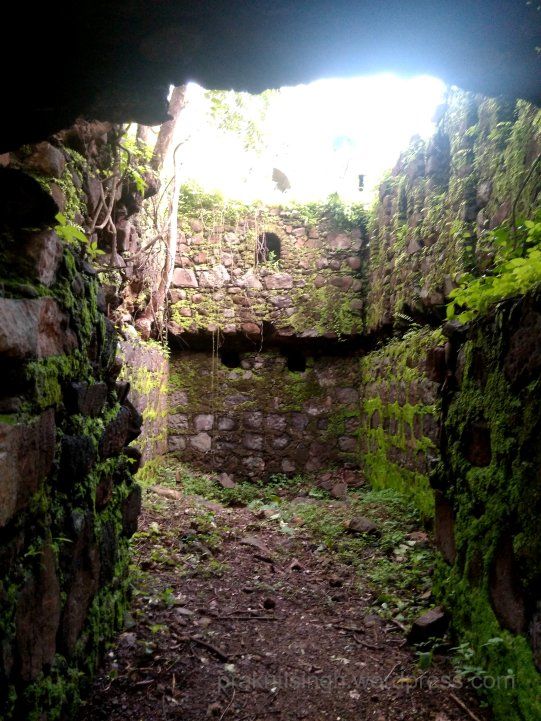 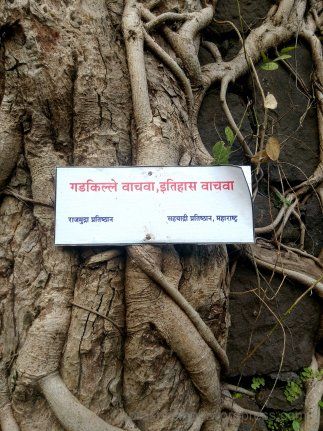 We were just happy we could find it. It was difficult to wait there for a long time, because of the mosquitoes, also we din’t feel very much safe there too. We din’t find any names or rather scribblings on the fort walls, maybe people don’t come there or are unaware. Also, no plastic bottles, and wrappers. That’s the good part. I just hope it remains the same, and people don’t use it for other purposes (drinking, smoking, etc) . There are boards everywhere, issued by Sahyadri Pratishthan, a city organisation working for the conservation of forts, to keep the place clean. Thanks to them, the fort is still alive.

And hence the journey ended. Every journey, every trip, long or short, teaches us something, and this one did too. In the journey of life, there will be many roads less travelled, and many people who would not believe you, and may even discourage you. What matters is how much you believe yourself, and accomplish what you want in life. The road otherwise not taken, maybe more beautiful and satisfactory !!

Straight From My Heart,