How not to travel

Most of us are accustomed to making grand plans of where to travel  or what to do once vacations come around. It all starts with the frustration of the monotony of life. Sitting with friends exchanging our woes while nursing our wounds ,deriving empathy from the fact that we aren't the only one that's screwed. I got sick of it, to break he flow I quit my job, made plans with them to travel or at least researched on it to do it some justice.  Little did i know it wasn't going to be anything like I expected it to.

After weeks of empty promises, waiting for us to actually decide on a place. One night, the gods of free time shed their blessings on us and all of us were free on the same day. So the night before we call it, me along with my roommates and finally decide to go to Kalsubai. We contacted ShadyTents for tents, which later we changed to sleeping bags thanks to our budget. We contacted a few more friends for info and also added to the travelling party. At that time we didn't realize that since so many ideas were thrown around, everybody was working on a different frequency. Thanks to which each of us had some interesting revelations, during the trip.

Being the Kings of Thrift, all of us went in search of bike rentals. A friend had informed us that there was a better place to hire than online. So taking his word we sent one guy to pick the sleeping bags up, while we went in search of bike rentals. On reaching the spot we realized that the only bikes to be seen were either being repaired or had been dismantled. There was a slight problem on the info that we had received. The person had last used the services 5 years ago. When we reached the spot all we found was automobile repair shops. Pissed at having traveled extra for naught, we then headed for our friend's place, to search online once again. One of his roommates owned a car, we figured it would be convenient if we could borrow it. We convinced him so well, that he and a guy who just happened to be there, also decided to tag along. We were glad at least one problem was sorted out, despite having an extra person. On being asked the location, we told him we'd be relying on google maps.

By the time all of this was set including the bags being brought, it was 8 o'clock. We had a late start because we tend to wake up between 12:00 pm to 02:00 pm. We decided that we would have dinner en route. We didn't realize till a while before our trip that there were 6 reasonably built and tall guys that are going to be fit into one Brio. It's ok for small journeys, but when you are taking a 3hr trip excluding the time spent in Mumbai traffic, you would forget what moving your legs felt like. We stopped at a dhaba to eat dinner at 12 o'clock. We sat and we stretched to check whether everything was still in place. The happiness derived from the stretch, smoke break and the trip made us eat a lot. The problem with that was that we still had 2hrs of that journey left. We stuffed ourselves back in the car filled with cigarette smoke, twisted limbs, loud music, full bellies and a trek to look forward to.

On finally reaching the destination, at 2 o'clock in the morning. We parked the car outside something that looked like a village. Fortunately for us, some villagers were awake enjoying their mid night tobacco. Not knowing where we were exactly, we asked them about the trek and they were kind enough to lead us till the starting point. Right there and then it suddenly struck the guy with the car that we would be going for a proper mid night trek. The fact that many ideas were passed around, he had no idea what the actual one was. He was under the impression that it would be an outing, in some place high up in the hills. Then he anchored saying that he wasn't expecting this, so we left him and the guy that tagged along, over there with a sleeping bag. Later on our way down we were informed that early in the morning he was woken up affectionately by a stray dog.

We started our journey up, armed with 2 water bottles, the flashlight in our cells and 2 sleeping bags. The path seemed incredibly easy initially, a bit too easy. The path was wide and not very steep. Only later we realized that we were not climbing a peak, but had accidentally strayed on to someones field. We walked back to the start and looked for something to guide us, when we noticed one incandescent bulb at some height. Hoping that was at the top of the right peak, we started our march to the top again, towards our North Star. Under the assumption that it would be a fairly easy trek and that we would be riding bike I had worn jeans and boots to the trip. I was harshly reminded how wrong I was. I barely had any grip, I was uncomfortable and since we had aimed to reach the top by sunrise the smoke breaks weren't that often. I had always believed that solo trips are better than group trips, that night I was glad to be wrong. One shouldn't compare the two as they are like apples and oranges, each with their own charm. I was lagging behind, but was encouraged to keep climbing and not stop. It brought me to a point that when they would take breaks to take pictures or a have a smoke. I would still be climbing slowly but steadily, in spite of my cell losing its charge and I was unable to see clearly till my eyes adjusted. Towards three fourths of the distance we had missed the sunrise. Only then were we ably to see how far had we climbed, through old and broken ladders and also by how much had we missed the actual trail. Certain people having spent the night there, had started early in the morning and were already catching up to us. One villager, bringing lemonade had overtaken us having started in the morning. Towards the end with only one ladder separating me from my goal. I finally decided to take a break. Some of my friends had opted to go another way to take pictures. I enjoyed the view of what I had accomplished with a friend of mine, both of us exhausted yet happy . The water was over but we had found an old well which didn't seem like it was used for ages. We debated with ourselves whether our thirst outweighed our health. The break would have lasted longer had not a girl suddenly walked up to us. My friend having his pride continued his march, while I being a true feminist and too tired walked right after her.

The top was spectacular, you could see all the hills surrounding the peak completing the horizon. The cold blast of the wind was refreshing, and made us want to nap beside the temple. We soon gave up on that plan as it was too windy. Plus its rather inconvenient to nap while tourists are roaming around you. Under the morning sun we were finally able to see our last and final mistake. We had come in the wrong season and everything around was dry but still beautiful. We sat on a ledge slightly below the temple to rest, smoke and nap away from the crowd starting to gather. After having some lemonade from a local, that charged it depending on the height he sold it from, we began our descent. The heat in the morning made it even more uncomfortable than the ascent. Too tired to care anymore I slid almost all the way down, occasionally running on top of rocks unable to stop. My legs were shaky and I was drenched it sweat. Once at the bottom all my friends and I looked forward to the trip back just for the AC in the car and so we headed home. In a much quieter way than we had started owing to the fact that most of us had fallen asleep. It was humbling to know that it was of a moderate difficulty must'v been my smokers stamina that made it a pain.

An impromptu journey, with its fair share of problems due to lack of planning. I'm still fond of that trip, as all the problem we had faced added a certain charm to it, under the starry night. Without it, it would have probably been as monotonous, as the lives we were taking a break from. 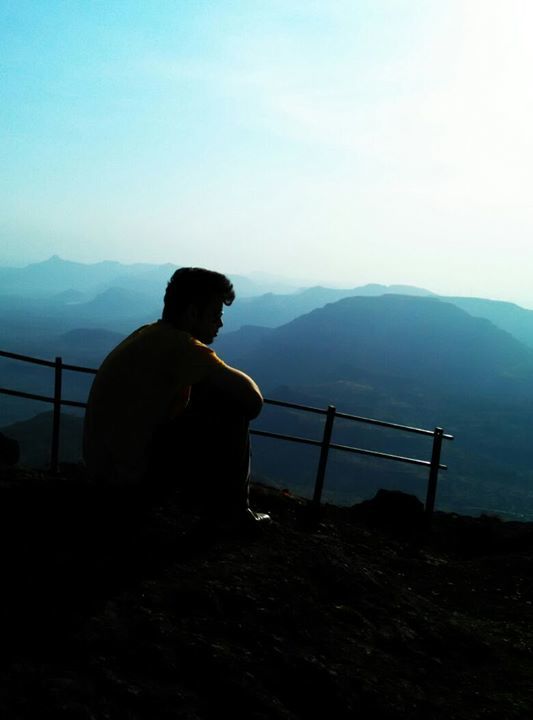