Continued from Kathmandu Top Attractions: My trip to the City of Temples (Part I)

During our stay in Kathmandu, we were deliberating on going to Nagarkot or Pokhara, but travelling to either of these places meant that we would need to spend a night there to see the sunset and the sunrise. Given our short schedule, we ruled out the visit to these places, as it would be difficult to drive back in the evening after sunset. These are the tourist places in Kathmandu that we visited instead:

About 20 km away from Kathmandu city centre, is a temple called Doleshwar Mahadeva, which is believed to be the head of Kedarnath temple, one of the most prominent Hindu pilgrimages in Uttarakhand, India. Given its religious significance, Birbal suggested that we go there.

It was a pleasant uphill drive with views of terraced hills and the valley. On the way up, I requested Birbal to stop at places from where we could get good views. He willingly obliged. 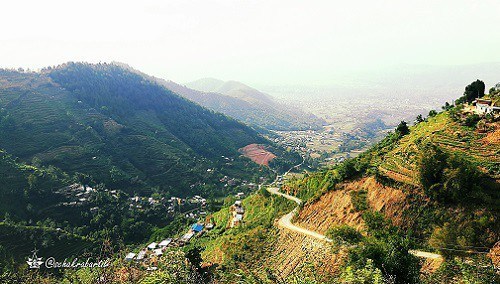 On reaching the temple, we found that it is a small, quaint place in the lap of the hills. The Shiva sculpture at the Doleshwar shrine is supposed to be 4000 years old. There were very few people. The temple was completely devastated by the 2015 earthquake and reconstruction work was going on. We bought some offering and went to the shrine, where a local person recited a stuti (prayer). We spend a few quiet moments at the temple and then proceeded to the other places.

As we drove through the hills, we could see a distinctive statue of Shiva standing on one of the far off hills. Birbal told us that we were heading towards Sanga on the border of Bhaktapur to see the lofty Shiva statue. 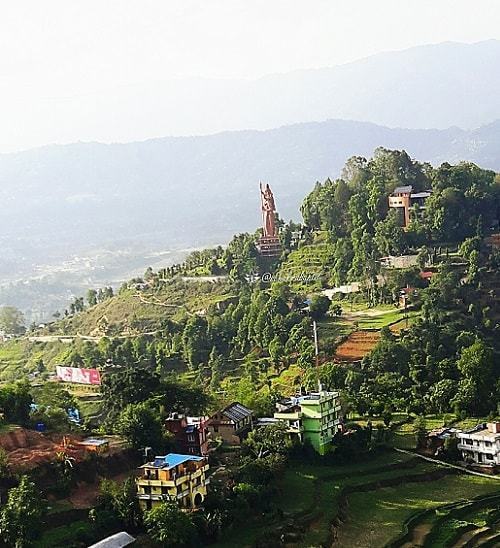 When we saw the towering statue from close, we were in complete awe of it. The 143 ft (43.5 m) majestic statue of Shiva made of copper, zinc, concrete and steel is both an engineering and artistic marvel. Structures have been constructed around the statue to stabilize the ground and safeguard against potential landslides. 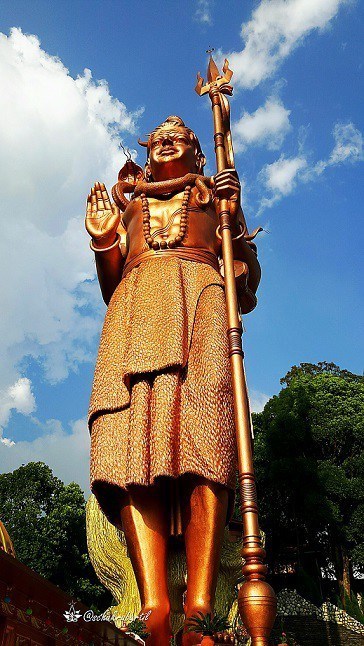 Panoramic view of the Kathmandu valley and the Himalayan ranges, and cotton like clouds floating by made a very picturesque sight. After several attempts, we could get a picture of ourselves with the entire statue. It struck me that never before have I seen so many Shiva sculptures in one day.

We found that the property also has a wellness resort and spa where tourists can have a peaceful stay while enjoying the views of the lush green gardens and the surrounding mountain ranges. We spent about an hour there before heading towards Bhaktapur.

Right at the entrance, we saw the steps of a temple devastated by the earthquake. Only the bottom half remains, while the top half was destroyed by the 2015 earthquake. Sculptures of elephants, lions and horses on both sides on the steps stand as the survivors of the earthquake.

Inside the Durbar Square is the Palace of fifty-five windows, a unique masterpiece of brick and wood, and one of the oldest monuments present in Nepal. The palace has a golden gate embellished with mythical creatures. On a column facing the palace is a statue of the king seated in worship. The entire square has the charm of the medieval world. We spent time looking at the city gates, temples, sculptures, idols, all of which gave an insight into the life and style of the ancient kingdom and convey the essence of the cultural heritage of Nepal.

Watching the sun set against the silhouette of the temples left an impression that would perhaps last in my mind forever. 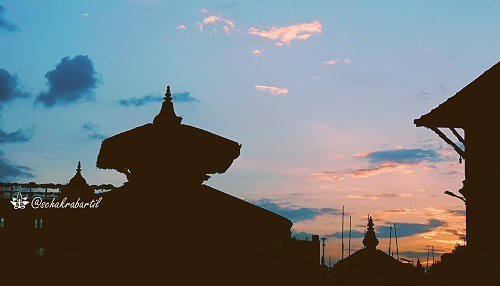 Next morning, we set off for Swayambhunath. On the way, our driver Birbal stopped at a Narayan temple. Maybe, he had instructions from his boss to take us first to the religious places.

The open - air temple is also known as Budhanilkantha Temple. It is dedicated to Lord Narayan, the incarnation of Lord Vishnu. Inside the temple, we found a large statue of Lord Narayan in a sleeping posture floating in water, with SheshNag (a hooded snake) rising protectively around his head. This 5m-long sculpture of Narayan is supposed to have been created in the 7th century from one huge piece of stone. Perhaps this is the only statue of Narayan in a sleeping posture. Photography of the sculpture is prohibited but one can take pictures of the other places in the temple courtyard. The lady had come for darshan. She kindly allowed me to take a picture of her. 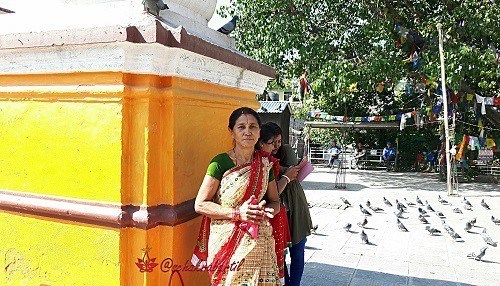 From the Narayan temple, we went to Swayambhunath, which I thought would be a Shiva temple. From the entrance, a flight of steps took us up to the Swayambhunath temple. On reaching the top we found a Buddhist stupa (supposed to be 2500 year old). Just across the stupa was a Hindu temple. A very cordial ambience prevailed in the temple as people lit incense sticks and lamps both in front of the stupa and the temple. 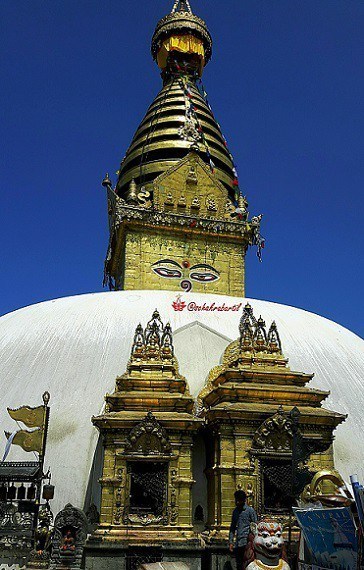 There were lots of monkeys all over the place, some perched on the windows, roofs and some rolling on the floor. They seemed to be at ease with the tourists and vice versa. From the temple, we got a lovely view of the Kathmandu valley. Downstairs I saw a swimming pool dedicated to monkeys, where big and small monkeys were diving, taking a dip, and honing their swimming skills. It was fun to watch a baby monkey deftly crossing the pool.

We spend some time at the stupa relishing the mystical, spiritual and festive environment at Swayambhunath.

Of the three Darbar Squares of Kathmandu, I found Patan to be the most beautiful and well preserved. This UNESCO Heritage site is like a living museum, where we could see exhibits of fine craftsmanship, and visually stunning display of Newari architecture in the ancient monuments, the array of temples and shrines.

We went inside the Royal Palace. Small doors lead to large courtyards. There is a three-storey temple on the side. In one of the courtyards, we saw a beautiful step well in the shape of Shiva Linga. Another courtyard houses the museum. The seating beside the windows of the museum gives a good view of the square and the road below. 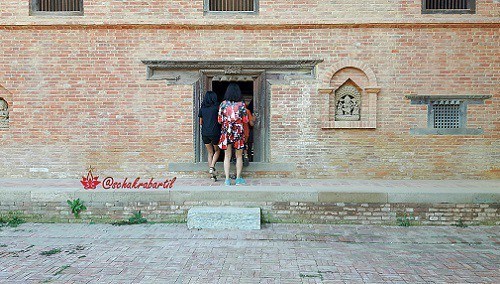 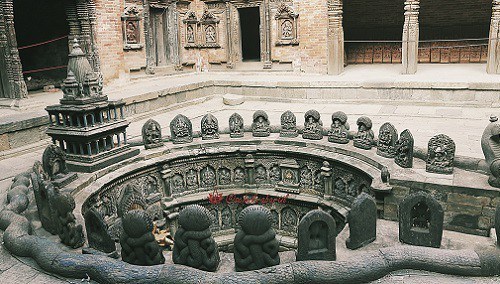 Out of the palace and museum, we walked around the Durbar Square and saw a huge bell that dates back to 1700s and marvellous sculptures of kneeling elephants and elephant riders in front of the temples.

On the day prior to our departure, we had a lunch get-together with my husband's college classmates from Kathmandu. I volunteered to be the photographer. Here is a picture of the sumptuous Nepali thali. The number of dishes and the portions in each plate was quite a lot. 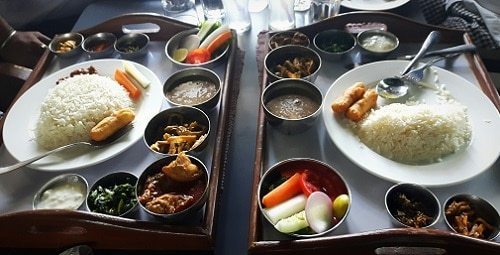 I have been posting the pictures on Instagram. If interested, you may want to have a look here.