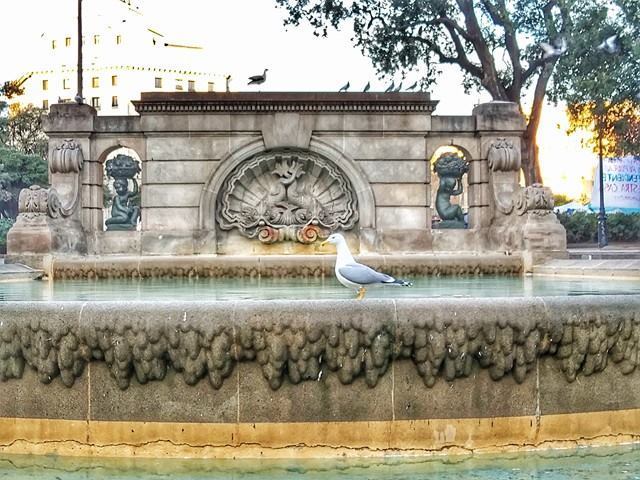 Beaches, Gaudi architecture, royal buildings and streets, football and beautiful churches- Barcelona has much to offer.

Here is everything you need to know on a two day/night trip to Barcelona.

The main attractions in the city include the works of Gaudi Architect who made some Gaudy designs that make Barcelona stand out, the beaches, Football stadium, Las Ramblas, Gothic quarter, Montjuic.

I took the Norwegian airline from London and arrived on a rainy afternoon in Barcelona (Wherever I go the London weather follows!)

Getting from Airport to City center

There are multiple options including the local bus and tram. I took the Aerobus which was pretty obvious to spot and it takes around 30 mins to get to city center.

Where can you stay strategically

Here are three places you need to know

Placa catalunya is the main square in the middle of the city and it has the Las Ramblas next to it. Las Ramblas is the main square in the city with high end restaurants and lots of souvenir shops. Placa Espanya is close to the Monjuic fountain. These two are consecutive stops on the Aerobus and are well connected with buses and metros. The City your buses start from here. Barceloneta is a beach and is close to many touristy spots. Gothic quarters is the older part of the city with a lot of bars and restaurants. It connects Las ramblas and Place Catalunya.

A very useful ticket to have if you are staying for more than 2 days. It can be purchased at any of the metro stops. You can use it for 10 journeys at a price of 10 euros. A single ticket on the other hand costs 2.2- 2.4 Euros. Metro is well connected, easy to use and they are known by the colour (Green line, Yellow Line etc). Buses are available in plenty as well.

I went on the Sandeman's free walking tour which went on for 2 hours. This isn't an entirely free tour, you are obliged to tip 5 to 10 euros. The guide gives a detailed history of the city and a bit of a political background. It was nice hearing about where Columbus arrived in Barcelona,The Jewish quarters, the Catalunya dispute and the culture of Spain. The tour was focused around the Gothic quarters.

Next day I took a city tour bus to get around the city as there was just too much to see and the fact that I was travelling solo. There are two companies City tour and Bus turistic. Do not get confused between the two. They have two routes which cover most of the city's attractions. You can get on and get down anytime throughout the day. Only the first spot is the most difficult to find. After that you can get on at the place you got down.

Here are the places I visited

It is the older part of the city within the walls. It has medieval buildings, churches, secluded squares, performing artists and interesting history. La Rambla is the 1.2 Km walk situated next to it. A tip given by our guide is to not buy anything from La Rambla is it is a rip off. He urged us to try tapas and seafood in the small shops by the alleys which serve the best food in the city. I intentionally lost myself inside Gothic quarters and stood by watching the street artists and vendors.

A park designed by the famous architect Antoni Gaudí. It has colourful stone structures, and fitted ceramic tiles. The monument core entry costs 7.5 Euros. The parts around it are free. I roamed around the core. To be honest I wasn't very impressed by it. There wasn't much to see in the park and it took me just half an hour to get around.

Fun fact about Barcelona beaches are that they are new ( man made creation for the Olympics). They imported Egyptian sand for creating them. Nevertheless the beaches look fantastic with good seaside food joints, vendors selling shawls and souvenirs. The beach was similar to the one at Rio with buildings at the Skyline of the beach.

It is another basilica by Architect Gaudi. It is under construction since 1882 and will take many more years to be complete. It is a gigantic structure in the middle of the city and is very unique in its style of construction.

Close to Placa Espanya you will find the magic fountain known for its colour and the dance it performs. Beware the fountain is functional only on thursday and saturday. Make sure you dont miss it. It is for free to view.

Do check out other buildings inside the city center like Casa Mila, Casa Amatller and Recinte Modernista de Sant Pau which stand out amongst the other buildings while you pass by. Barcelona FC Stadium is a must visit if you are a football fan. The city in itself is glorious to walk around, with Modernistic architecture. I felt it was a a mix of Paris and Italy.

A good place to retire for the day. Walking around the main square.

Tip: If you see street artist do not click a picture without tipping them. It will anger them.

Spanish cuisine is an ancient Mediterranean style of cooking, characterized by the aromas of the herbs. Tapas are local food portions served on a stick. They cost anywhere between 1 to 5 Euroes. You will find Potato omelettes, Anchovies, Dried Chillies, Fried Chicken, Chicken on bread, Sausage rolls Etc.

I tried a Mixed Tapas meal for 12 Euros and it was delicious.

If you want to try fresh seafood and vegetables visit the local market - La Boqueria. It is closed on sundays unfortunately.

Sangria is the symbol of spain. It is a wine cocktail made with various fruits like orange, apple, pears etc. Definitely try it out while having your tapas

Fun fact: Over 2,000 years ago the when Romans arrived at Iberian Peninsula they planted vineyards along the way. As water at that time was considered unsafe for drinking, it was common to fortify it with alcohol to kill off any bacteria. The first sangrias were mixes of water, wine, fruits and herbs, A mixture made to kill the bacteria

Hope you found this guide useful!

This is the first time I had travelled to another country solo.