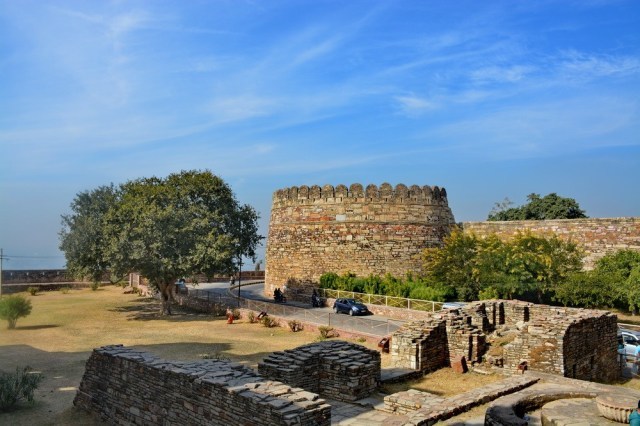 Rajasthan had been the epicentre of Rajput galore and historical prominence. Forts, palaces, monuments, temples, lakes and gardens portray the exclusive glamour of Indian tourism. Chittorgarh or Chittor is one of the major cities of the state. It is an impressive tourist destination, dominated by princely buildings and monuments. Let me sway your minds into the eccentric grandeur and charm of the best places to visit in Chittorgarh.

Chittorgarh Fort is significant in narrating the tales of heroic and valiant acts of the Rajput rulers. It has been listed in the UNESCO's World Heritage sites. There are many temples, towers and palaces inside the fort demonstrating the architectural marvels of ancient India. The fort has witnessed many sacrifices and battles between the Rajputs and the Mughal and Muslim rulers. The fort is one of the prominent places to visit in Chittorgarh.

It stretches across almost 700 acres of land and is perched atop a 600 feet hill. The fort was constructed way back in the 7 th century. You must not miss the sound and light show in the evenings. The entire fort is illuminated with bright colourful lights, and melodious music of the ancient Rajput era. There is a minimum entry fee to enter the fort.

Rani Padmini is the legendary Rajput queen, an icon of an astounding combination of beauty and intellect. She was married to Rana Ratan Singh of Mewar. In a fierce battle, the Muslim invader Alauddin Khilji defeated Ratan Singh. Rani along with many ladies of the Rajput clan performed Jauhar or self-immolation to prevent being captured by the Muslim warriors.

The palace is of Rani Padmini, where she resided after her marriage. You will be amazed to witness the intrinsic beauty of the three-storeyed palace. The architects and craftsmen followed the Persian architectural style and design. The palace is circumference by a spectacular water pool, adorned by lotus and water lilies. It is one of the renowned places to visit in Chittorgarh.

Vijay Stambh as the name implies, was constructed by Rana Kumbha to commemorate his jubilant victory over Mahmud Khilji. The gigantic monument is recognized by the name Tower of Victory. The iconic tower serves as a landmark of the city. It is one of the finest places to visit in Chittorgarh.

The tower stands tall with nine storeys, carved artistically out of white marble and red sandstone. Images of Hindu gods and goddesses adorn the walls on the monument. You must not miss climbing up the 157 steps, a thrill of its own. The enchanting views of the city from the top of the tower is a treat to the eyes. At night, the tower glitters and sparkles with the lights presenting an ecstatic phenomenon.

Kirti Stambh is an iconic tower constructed in the city in the 12 th century. Built by a Jain merchant, you can observe images and figures symbolic of Jainism religion and culture. Known as the Tower of Fame, the gorgeous monument is dedicated to Rishabha of the Jain Tirthankaras. The Jain devotees visit the tower to offer their prayers and seek blessings.

The key attractions of the tower are its beautifully carved windows and balconies. You must climb up the seven storeyed structure to witness the stunning scenic beauty of the city.

Fateh Prakash Palace symbolically represent the modern architectural design and style. The palace is now converted into a museum. It is frequently visited by tourists every year. Various paintings and ancient historical artefacts resides within the palace. It is one of the most popular places to visit in Chittorgarh.

A beautiful idol of Lord Ganesha is present inside the palace. The architectural brilliance of the palace is worthy of appreciation and praise.

The temple is dedicated to the Jain Tirthankaras. It is a conglomeration of 27 temples inside a single campus. Prestigiously occupying its place in UNESCO's World Heritage Sites, it represents the captivating beauty of the Jain architecture.

The serenity and calmness presiding in the temple is mesmerizing. The enthralling architectural beauty of the temple will leave you awestruck. Jain devotees and tourists visit the place often to attain surreal peace and composure. A small tip is to visit the temple early as they close for the public quite early.

Shyama Temple is one of the popular religious places to visit in Chittorgarh. Dedicated to Varaha, the incarnation of Lord Vishnu, the temple boasts of its intricately carved images of gods and goddesses. The walls, pillars, columns and towers illustrate the talent and skill of the ancient artisans and craftsmen.

Pilgrims and devotees from various parts of the city and other regions in Rajasthan visit the temple to offer their prayers to the Lord. Locals consider the temple pious and divine, the Lord protecting them from all evils.

Well, there are many more fabulous places to visit in Chittorgarh. These are the key ones I feel you must not miss in your bucket list. The best time to visit is between September and March. Commutation is easy from various parts of India. The nearest airport is at Jaipur and the nearest railway station is at Ajmer. Buses and cars are available in abundance.