Reykjavik Travel GuideReykjavik TripsTrip Across A Little Corner Of Iceland

Trip across a little corner of Iceland

I’m on the last little bit of the way home, just waiting for a g&t in Heathrow before the last flight home. Another great trip, lots of cool stuff to see, some amazing photos and a truly great time. I (with my parents) managed to explore a reasonable bit of Reykjavik, an amazing cool, but not especially large, city (which just happens to be the most Northerly capital in the world, and the most Westerly in Europe!!), and also got out to glaciers, waterfalls, big hills, open plains and some awe-inspiring sights.

This then, is me recapping a large chunk of what I saw – mostly so that I can remember it later, because after all, at the end of the day, a travel blog is actually just a travellers diary, but a bit more open to the world!

I largely covered the first day and the trip out in an earlier post, and given England got knocked out of the World Cup that night, I don’t think any more needs to be said. The next day we had a wander to the big concrete church (Hallgrimskirkja), and up the tower to great views of the colourful city below. As with almost everything in Iceland (except the amazing natural sights once you get away from the city), there is a fee, but it’s slightly less than a pint to get up there, so it’s not too unreasonable and I think the view is well worth it. After a coffee, and some food we decided to head out towards some hills for a bit of a walk. After poring through a couple of maps, we decided on a hill a bit to the north of the town that would do for a bit of a wander round. Mosfell, as it turned out to be called, ended up being about a 2-and-a-half mile hike, starting from a beautiful little church (with pretty mMosfell Churchuch nothing else around), and going up quite a pleasant path (with quite helpful orange route markers ever 100 metres or so), through lupins and around huge volcanic rock formations, until the summit. The next day, back in Reykjavik, we headed for the National Museum, which accounted across two floors for the thousand-or-so years of Icelandic history. As national museums go (having seen a few across several countries now – and they’re always worth a visit!), it was quite good, and although it could have done with a bit more depth in parts, it still took most of the morning to get around, especially when the free (English language) tour was included. 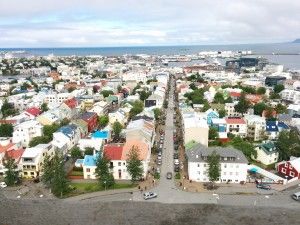 Then the downhill just got plain fun…It maybe would have been a better plan going up this side – it’s really, really steep, but covered in scree and so an absolute nightmare to go down in any sense of safety. But we did, partly using “paths” that were there, and partly just wandering down through routes that looked like the rock surface was going to be stable enough. Once we’d worked our way down and off the hill (a bit over 200 metres, so nothing huge, but still a decent little climb from not much above sea level), we went a bit further up the coast, first to Akranes, where we didn’t really stop properly, but drove through and had a look around, and then on up to Borgarnes, where we did. 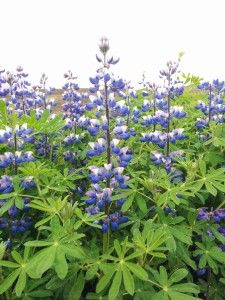 That afternoon we headed back down the coast to the Blue Lagoon. I’ve covered it a bit in this post, but it has to be said that, despite the tourist crowds and the accompanying overpricing, it was well worth a visit – one of the most relaxing things I’ve done since the hot baths in Budapest! I’m not really the mud scrub/face mask type, so I couldn’t really say if it did anything for my skin, but my general aches and pains from too many years of sport and the like felt amazing afterwards!! 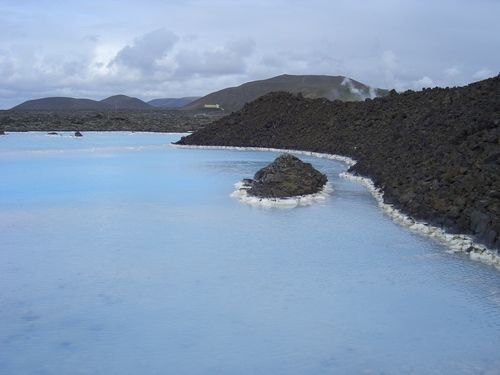 On day three (full days) we headed out and away from Reykjavik to see the ‘big’ sights – the waterfall at Gulfoss, the Geysir at…well, Geysir, and Thingvellir. These are down as probably the big three sights that everyone has to go and see in the greater Reykjavik area (only about an hours drive if you go the short way), and really are stunning. Thingvellir itself is truly epic, if it does take a bit of imagination to really understand how it would have looked back when it was the seat of the Icelandic Althing (sort of like a parliament of the day – not exactly representative, but maybe somewhere along the lines of the English Barons of a similar time period). 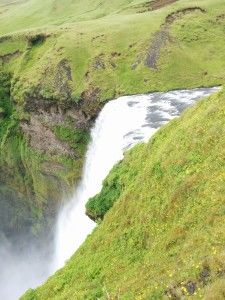 The next day was our last full day in Iceland. We’d booked to go walking on a glacier which turned out to be right next to Eyjafjallajokul, the volcano that brought the world to a halt a few years back. That was absolutely amazing, even if the ice wasn’t quite as blue and pristine as we’d been expecting. After a couple of hours of cramponing about on the ice, we headed back down and back towards Reykjavik one more time, stopping off along the way at a viewing point for the volcano and at two huge waterfalls: Skogafoss and Seljalandsfoss, the latter of which you can even wander behind!! 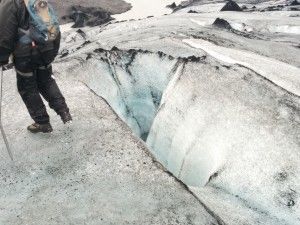