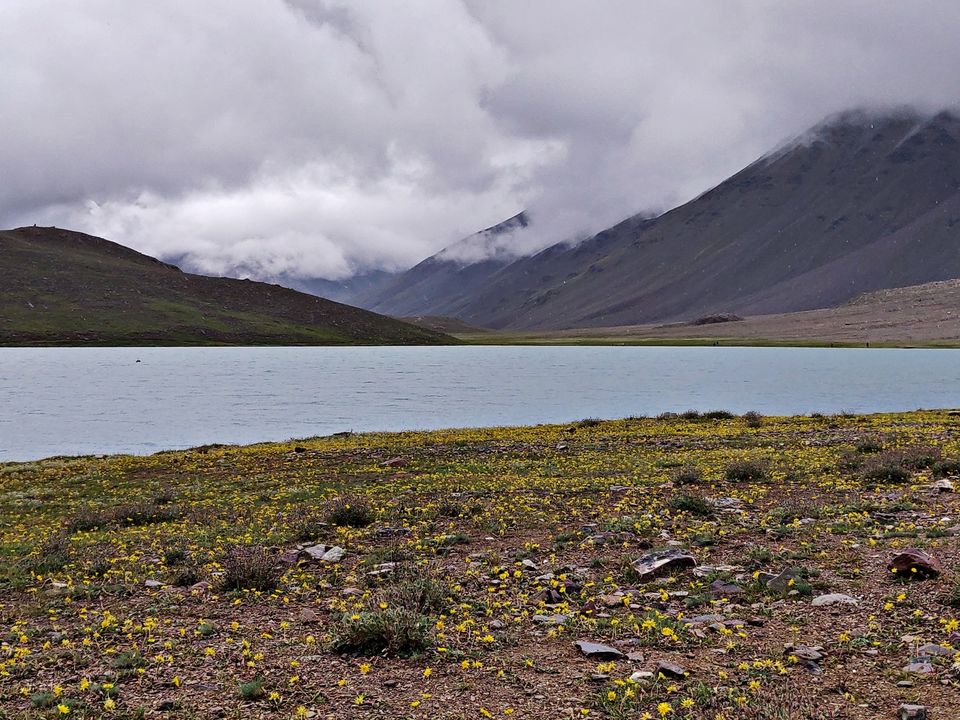 I had not found any travellers going to Chandratal at zostel Spiti or anyone in kaza and needed to leave next day.So without any arrangements to reach chandra taal lake I left for Batal by morning bus from Kaza next day with a mental note that I may need to trek from Batal to Chandra Taal and it was a rainy day as well.

I reached around 10 am at Batal. Finished my breakfast, and waited to see if there is any hope of finding a vehicle heading to the lake.I waited for 30 mins but found no success.Now the rains had cooled down a little. So, decided to start walking to the lake  rather than wasting time. Hardly five minutes had passed and  it started to rain again but i thought atleast water proof upper clothing would keep my upper body dry and continued.

After about just walking nearly 2km spotted a pickup vehicle coming from Batal. I signalled for the lift;  Vehicle stopped & disappointingly the front seating area was already packed with one tourist,a local along with a young teenager and ofcourse the driver.I told them that I would stand behind in the carriage area as there is no space. But this Local gentleman (angel for me that day) commandingly told that by the end you would  definitely get sick and also it will be lot more difficult for you to stand  in carriage area on this super bumpy ride. I said I'am wearing waterproof jacket and would be fine at the back. The gentleman said just get in , riding at back would be too bad for you. He along with his teenage companion got out and went to stand in the back in the rains and put me inside the comfort of seating area. I was left gobsmacked!.

I was a complete stranger to them and these two guys do  not gain anything from me and yet they gave up their place of comfort for mine well being. I just thought Good Lord so much kindness in this valley. And it turned out as they said super bumpy ride it was. Only God would  know how would  I have reached the lake if not for these angels.