Norway and Sweden: Beyond the Clichés 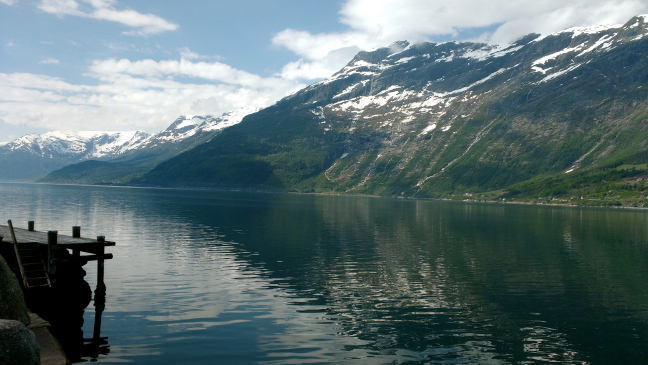 You've heard it before, and you'll probably hear it again: Norway and Sweden are beautiful places to visit - as long as you can rob a bank before you go, that is. And when you get there, of course, you'll be surrounded by beautiful, blonde, slightly reserved men and women, who have modern views on the environment and gender equality, and drive electric-powered Volvos whilst listening to ABBA. But how much of this is actually true? Two Wolverhampton girls and a little Skoda hatchback embarked on a Scandinavian adventure to find out. 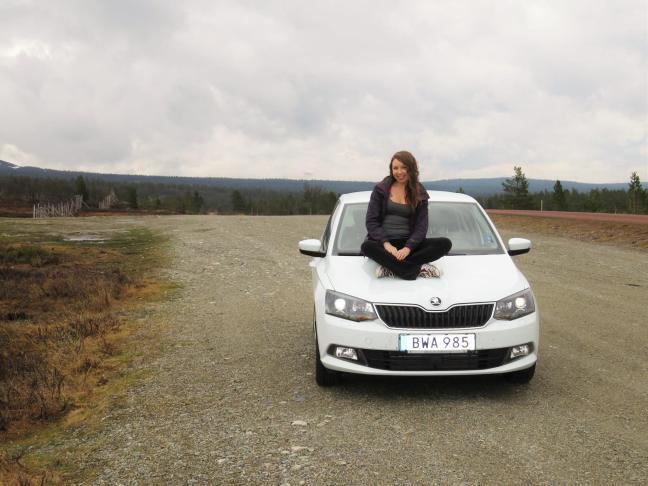 Two Swedish clichés in one here, but both are kind of true: the cost of living in Sweden is extortionate, and ABBA is still tooted as the best breakthrough Sweden ever made in the global music scene. Having said that, to be fair to the Swedes, they are doing their best to make the world aware that they're very much in the 21 st Century these days. In the arrivals hall of Stockholm airport, for example, you'll find a series of photo portraits of modern Swedish celebrities, and even a clever little speaker hanging down from the ceiling to create a little sound pod playing songs by Avicii.

As for the money side of things: you can do Sweden on a budget, but don't be surprised if this means preparing your own meals, or at least sacrificing those fancy dinners out you might usually treat yourself with on your holidays. In Stockholm, we stopped for lunch in a cute little place called Sundbergs Konditori that, despite being the city's oldest bakery-café, was recommended as a budget option by Lonely Planet. For standard lunch food, we paid what you'd expect to pay for an evening meal in any normal city outside of London.

Oslo, surprisingly, seemed even worse for our bank balances; a canteen-style lunch (mains only, no drinks) set us back the equivalent of around £15 per person. Even the supermarkets, though not as astronomically expensive as the restaurants, are pricey enough to cause a wince and sharp intake of breath at the checkout as you part with your cash. 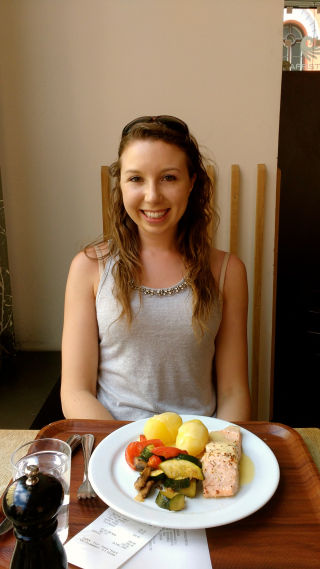 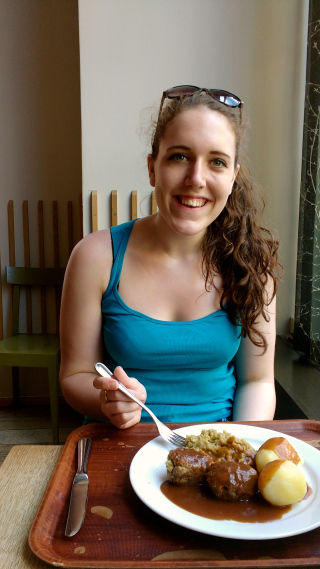 With our canteen food!

A stereotype we all love to believe, this one, disappointingly, proved only half true. However, since we're making sweeping statements here, I might as well go ahead and say that, generally speaking, Stockholm seems to have the best pick of local hotties out of all the cities we visited in the two countries. At times it did feel like everywhere we turned was another Nordic beauty - although it's worth noting that they didn't seem to be any more blonde-haired or blue-eyed than in any other city in Europe. 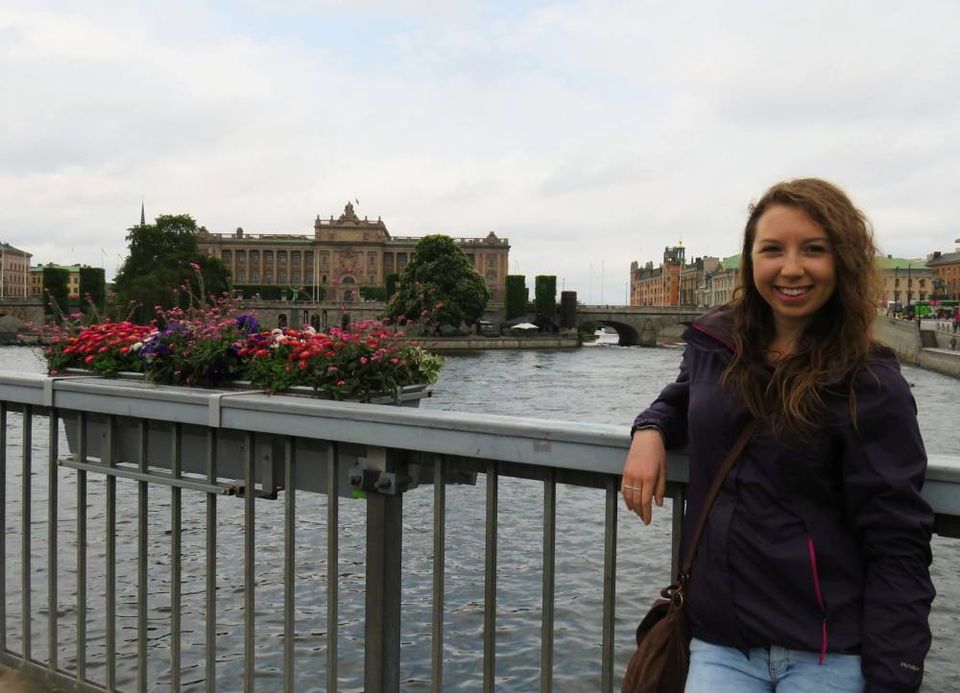 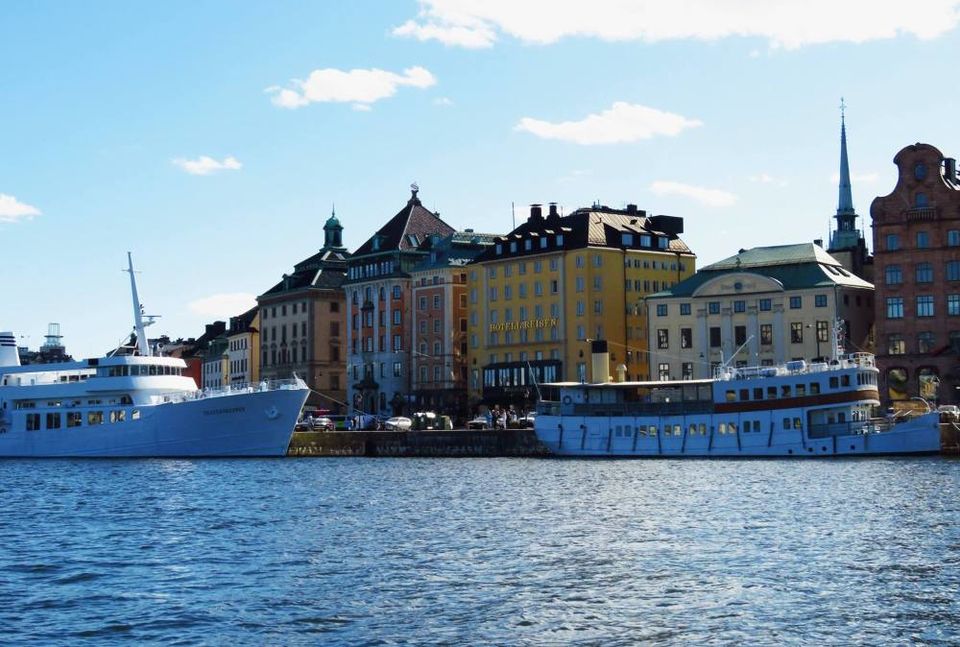 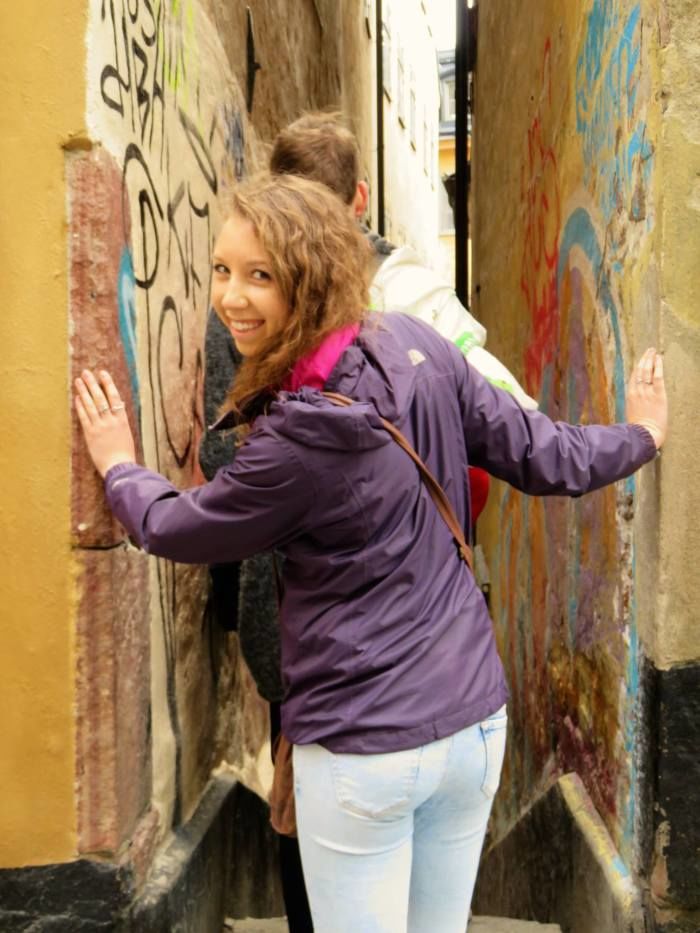 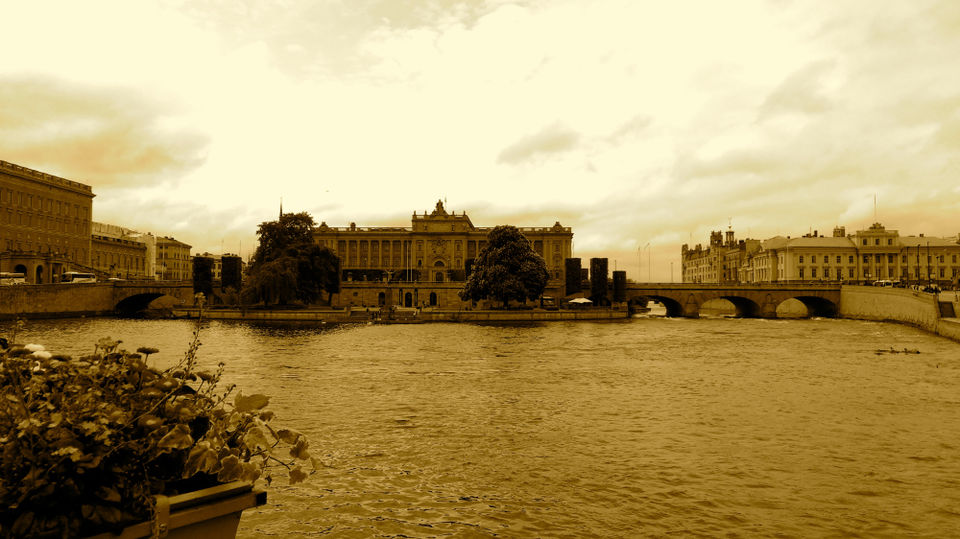 I have to say on that this one is a bit of an urban legend; true, you probably won't spark up a conversation with a stranger here, but is that really a common thing now in any part of the world? We found both the Norwegians and the Swedes to be open, chatty and friendly people. Staying in Airbnb accommodation for almost the entire trip, we met some genuinely lovely people, who were keen to find out about us and our culture as well as share their own. 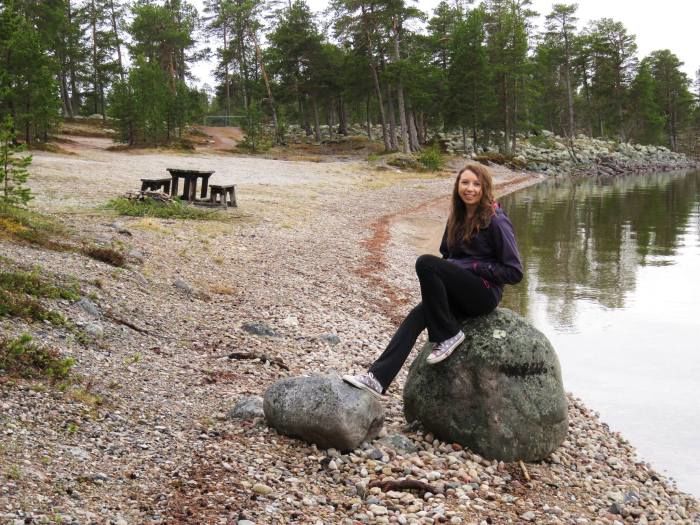 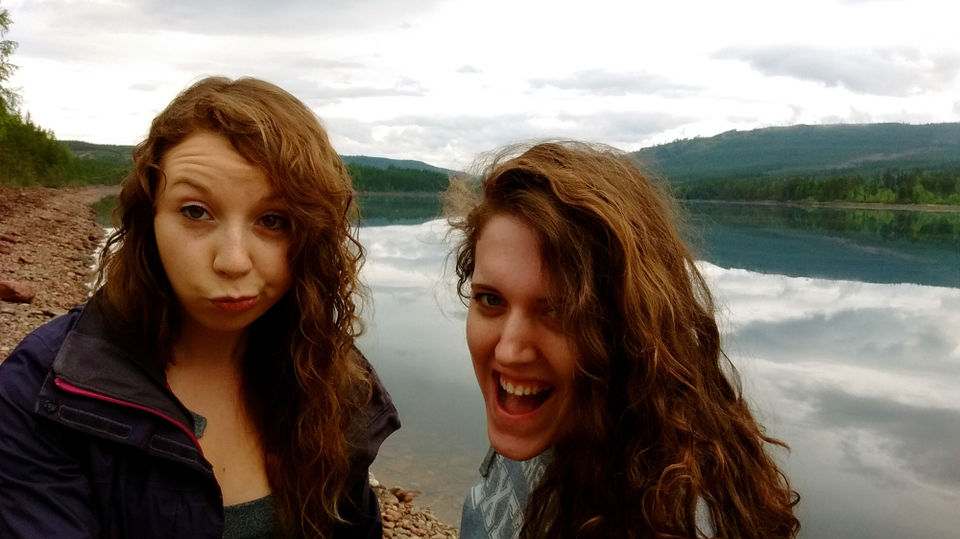 Everyone Drives a Volvo

Although Volvo is purportedly one of the top six most popular car brands in Sweden, it is not, contrary to common perception, a complete obsession. I'm not much of a car fanatic, I must admit, but I can't say I noticed a shocking percentage Volvos on the road - in fact, what we saw most of were shiny new 4x4s, especially (and somewhat incongruously) in inner city Stockholm.

After speaking to an American on the train to Gatwick, who'd spent a significant amount of time in Norway, we were also expecting to see an overwhelming amount of electric cars over there. Disappointingly, we found this wasn't the case, at least on the long drives we were doing through the mountains; although logically, an electric car would be a poor choice for any kind of long distance driving, where petrol stations are few and far between, let alone electricity points for eco cars. An interesting conversation with one of our Airbnb hosts up in the northern fjords, however, did reveal that electric cars are much more popular in rural areas, and that the government has introduced some generous tax incentives, particularly to companies who use them as their company vehicles - hence why ownership of electric cars is on the rise. 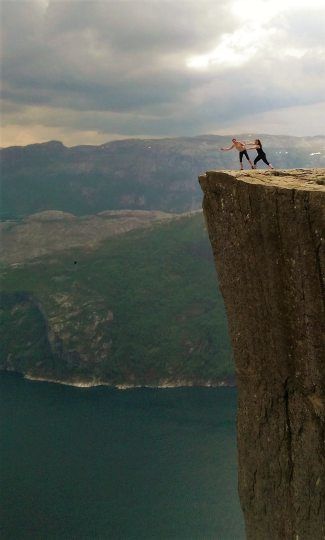 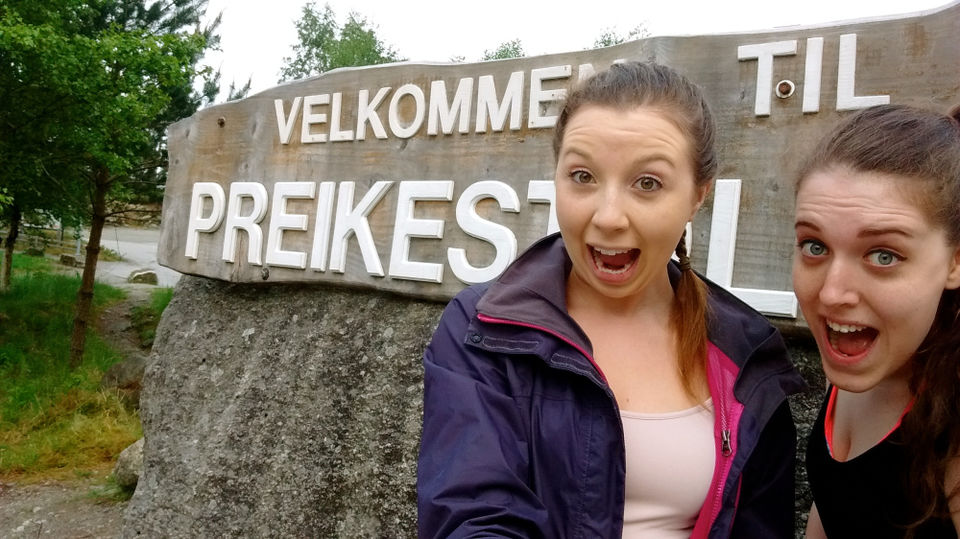 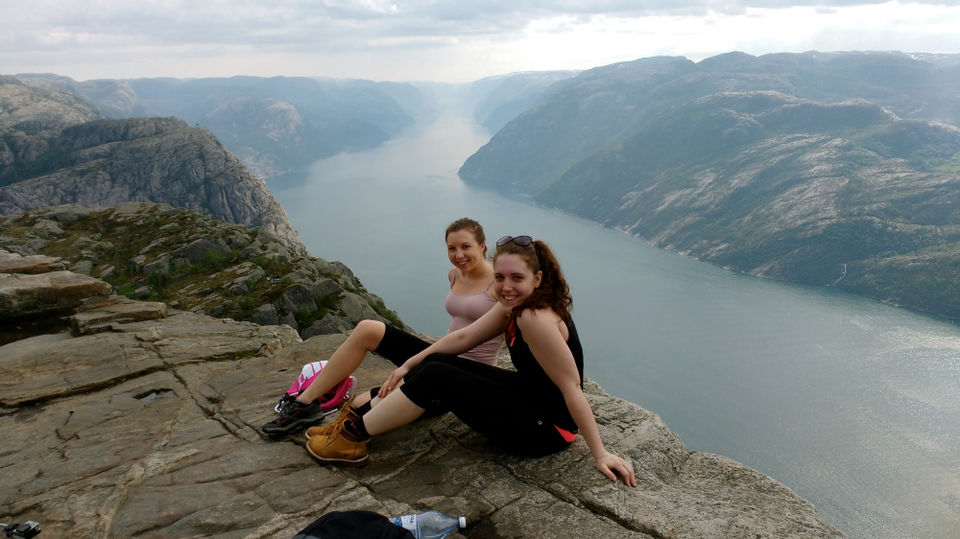 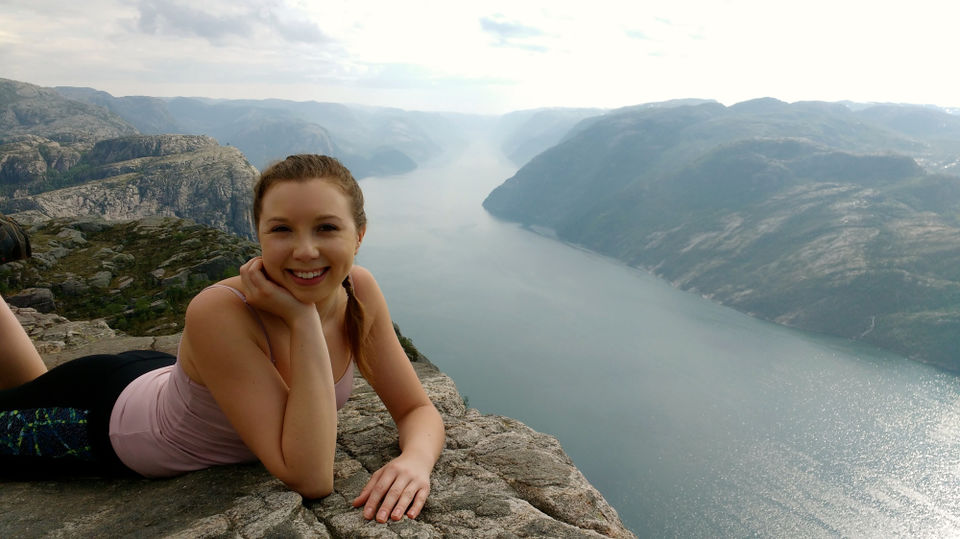 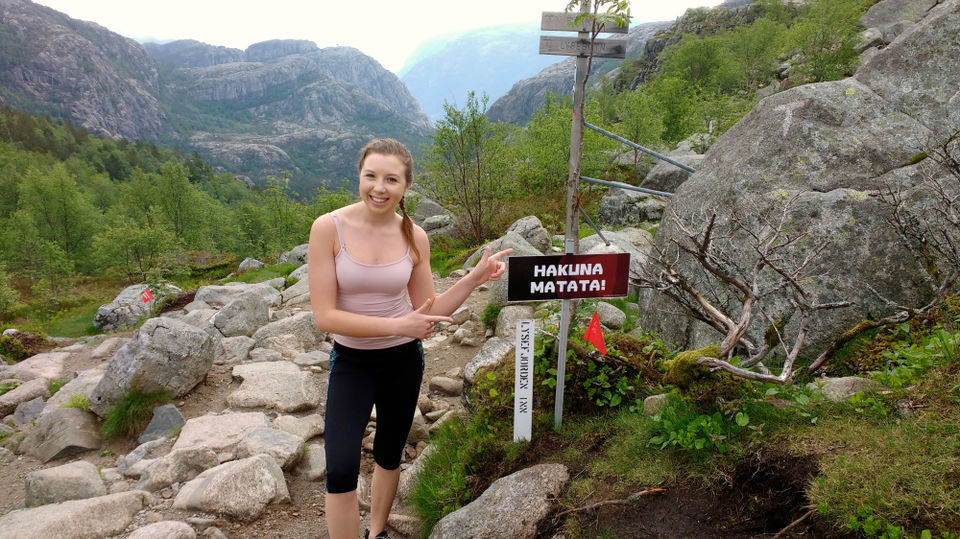 Twee and Country vs. Modern and Minimalist

As far as I can tell, Scandinavian lifestyle and architecture is perceived by the rest of the world as falling into one of two camps. Firstly, there is the idea that Nordic people are rustic, hunter-gatherer types, whose favourite pastimes constitute elk hunting and fishing, and who live in quaint wooden houses in the middle of nowhere. 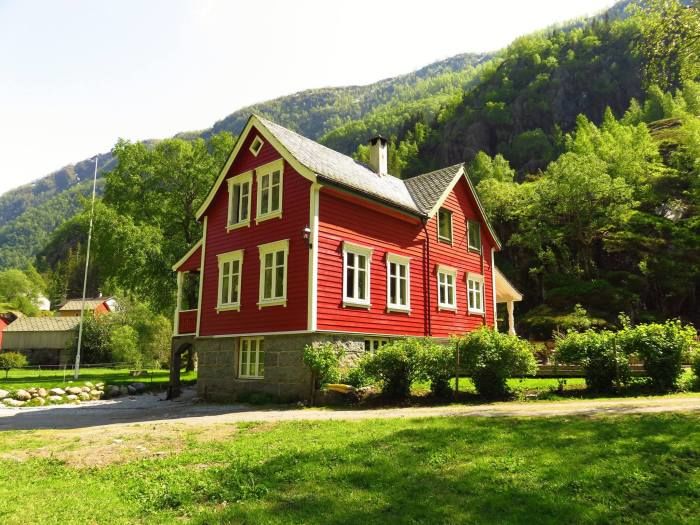 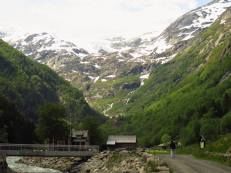 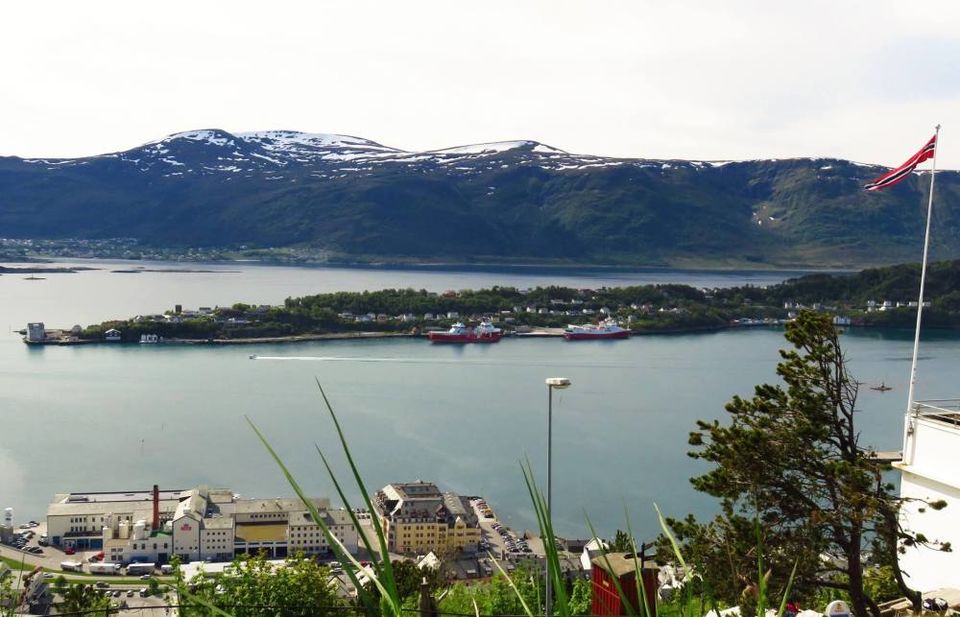 Believe it or not, there is an element of truth to all this - taken with a pinch of salt, of course. Swedes and Norwegians do indeed love the outdoors, and it is even written in the law that the public may have access to private land for recreational purposes, provided they treat said land respectfully. They also show an impressive amount of concern for sustainability and the environment, with widespread awareness of key issues like recycling and responsible energy consumption.

As far as the houses are concerned: examples of the archetypal colourful wooden house can still be found in many places across the two countries, particularly in more rural areas. In the cities, however, such as Stockholm, a series of devastating fires across the ages has led to their reconstruction in brick and stone.

Perhaps this is the origin of the opposing stereotype: that of modern, functional and understated architecture with clean lines and minimal, Ikea-style furniture. I have to say, I did get the impression in both Sweden and Norway that this style isn't so much a trend as a way of life. It's logical, of course, that the living spaces of a population be a reflection of the way of life and ideals that are prevalent in that country. Nevertheless, it's incredible to see to what extent the Swedish concept of lagom ('just enough') is physically manifested in their architecture and furnishings. All the Airbnb properties in which we stayed followed this model of interior design, regardless of the age or profession of the owners.

The two wildly opposing images of Sweden and Norway - as modern, technologically advanced states or as a collection of antiquated rural communities - may seem a strange juxtaposition, but it's surprising how well these two concepts work hand in hand. There may be a lot of remote villages and towns dotted around the Nordic countries, but they are well connected by advanced infrastructure and innovative technology. The roads, even in the deepest depths of the countryside, are efficient and well maintained. We lost count of the number of tunnels we passed through in Norway (there are over 900 in total), each of them incredible feats of engineering, boring straight through kilometre upon kilometre of mountain. It goes without saying that the famous Atlantic Ocean Road, which bisects the Norwegian archipelago in Møre og Romsdal and consists of tiny islands connected by causeways, viaducts and bridges, is not only an amazing feat of engineering but - and I've never said this about a road in my life - a beauty to behold. The Trollstigen Mountain Road is astonishing in its own way, consisting of 11 hairpin bends down the mountainside. Each new turn felt like entering a new level of Mario Kart, whether we were cruising down endless stretches of open road, zooming over sky-scraping bridges or contemplating hairpin bends and a sheer drop. 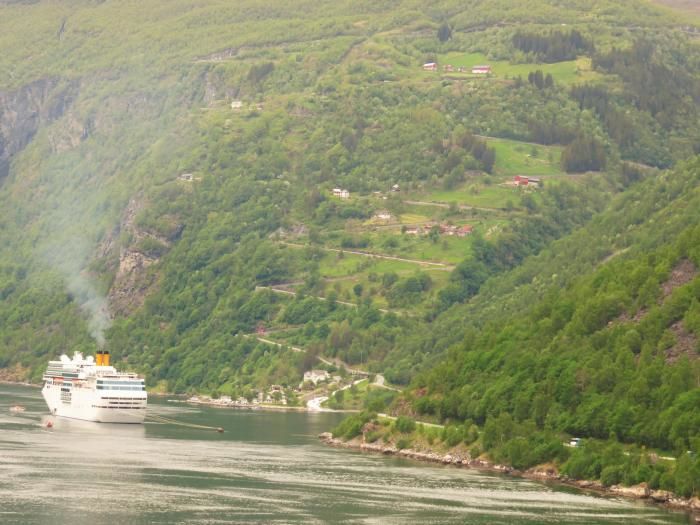 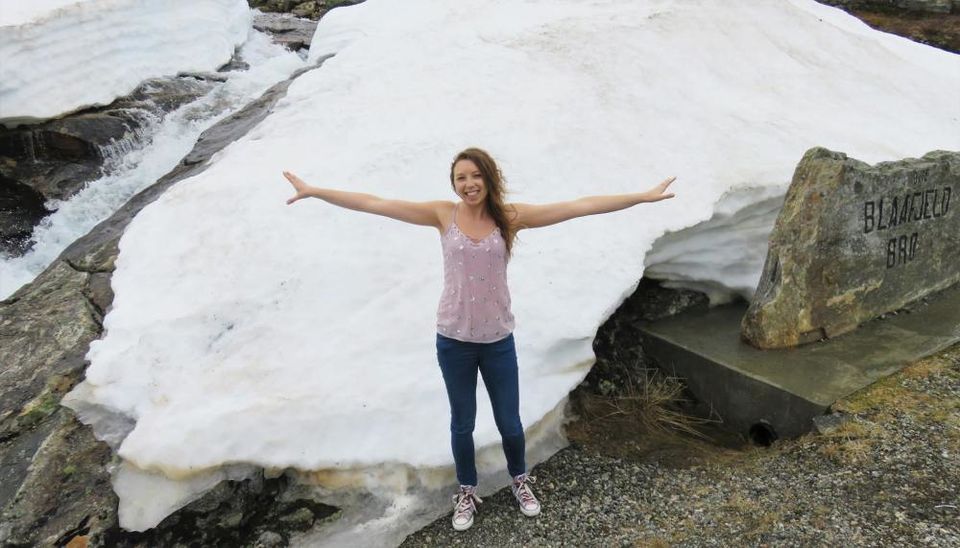 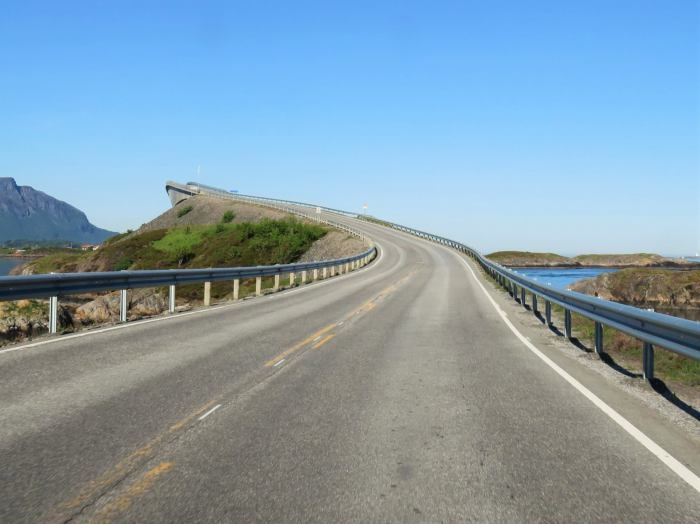 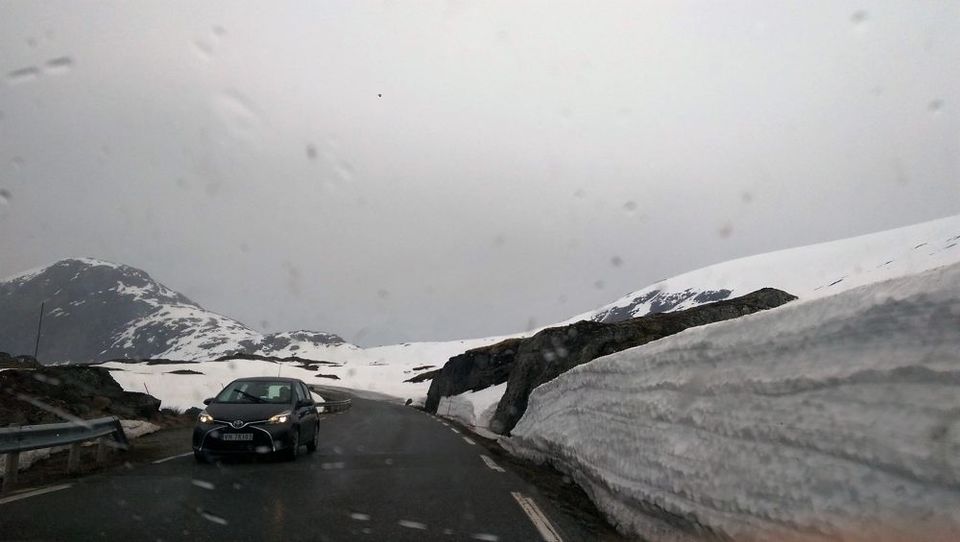 What Else I've Learned

Now, while there are plenty of stereotypes to give you idea of what you might be able to expect when holidaying in Norway and Sweden, there are also a fair amount of things I've learned on my short trip that no one ever really tells you about. 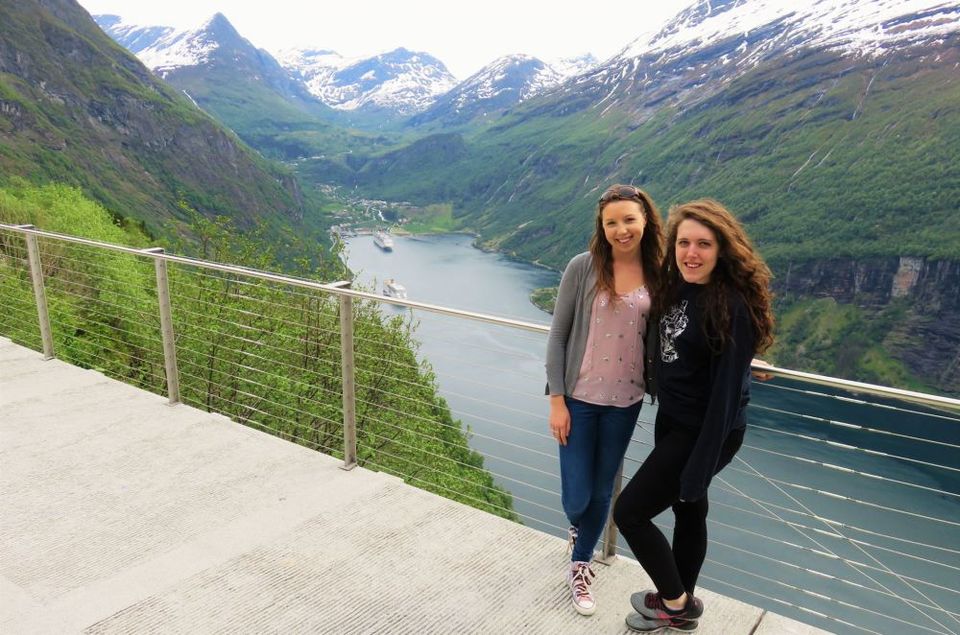 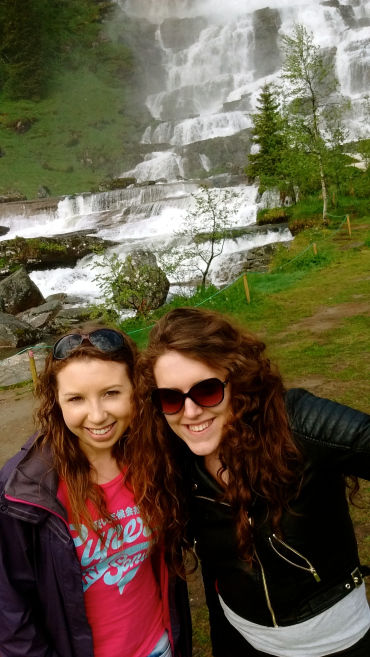 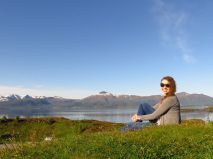 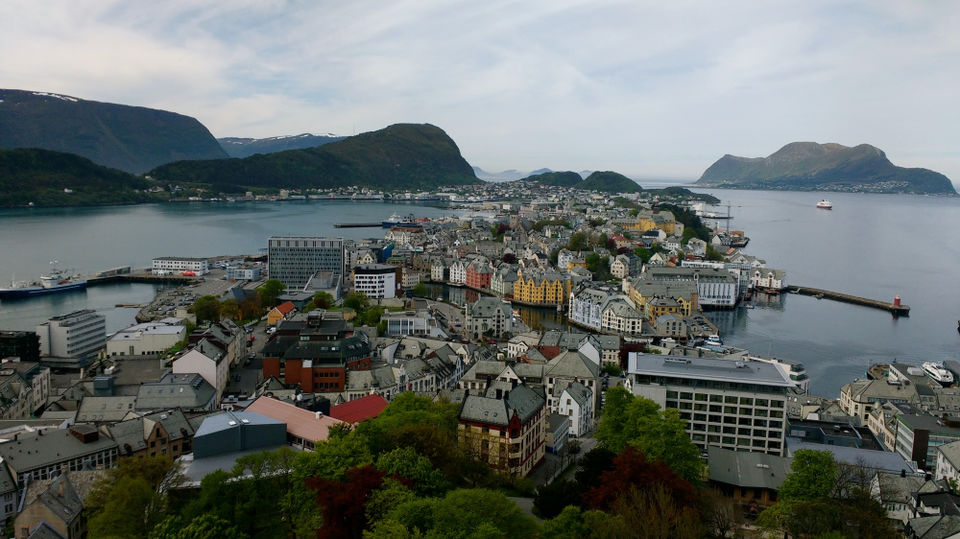 Norway and Sweden both surprised and charmed me. The people are friendly and welcoming (and everyone speaks English); the landscapes are out of this world. A holiday in Scandinavia is unlikely be a cheap one, but if you're a bit savvy, you can visit without breaking the bank.

Staying in Airbnb accommodation is a great way to get to know local people and experience their way of life, whilst doing a self-drive, though tiring and time-consuming, is absolutely the best way to see the place. I'm sure cruises across the fjords are wonderful, but in a car you are able to see the fjords from up in the mountains, and have the freedom to take the roads less travelled. The ferries across the fjords aren't cheap (around £10 a pop), but they're frequent and efficient, so you can still enjoy the experience of crossing the fjords by boat.

If I could do the trip again, the only thing I would ask for is more time. There is so much to see and experience that ten days was really only enough to give us a taste of what is on offer. So, visit Scandinavia, but you'll need more than just a good budget to really experience it. Take with you a flexible itinerary affording you the luxury to stay longer in places you can't bring yourself to leave, take some good tunes to entertain you on some very long drives, but most importantly, take with you an open mind, and prepare to be amazed. 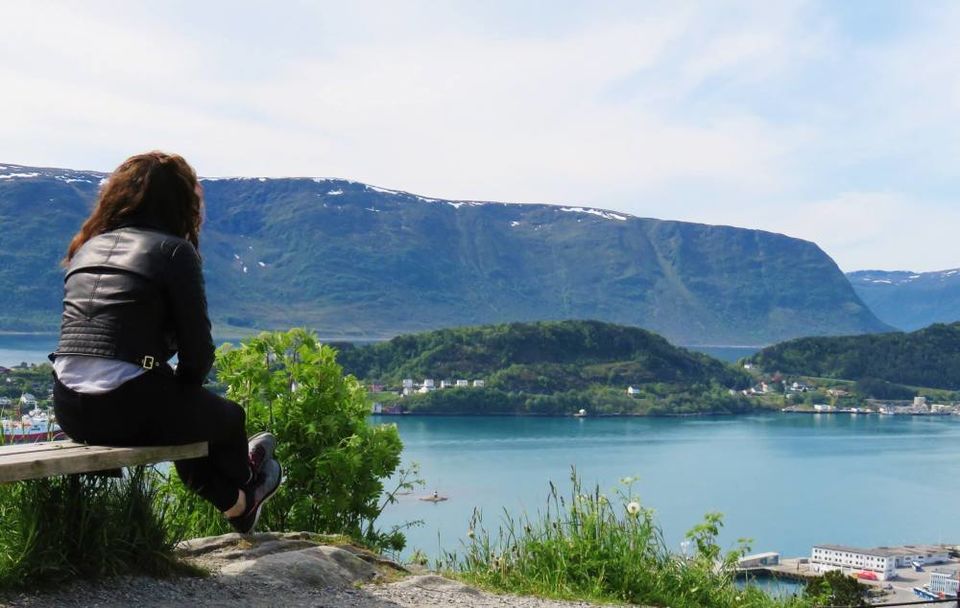 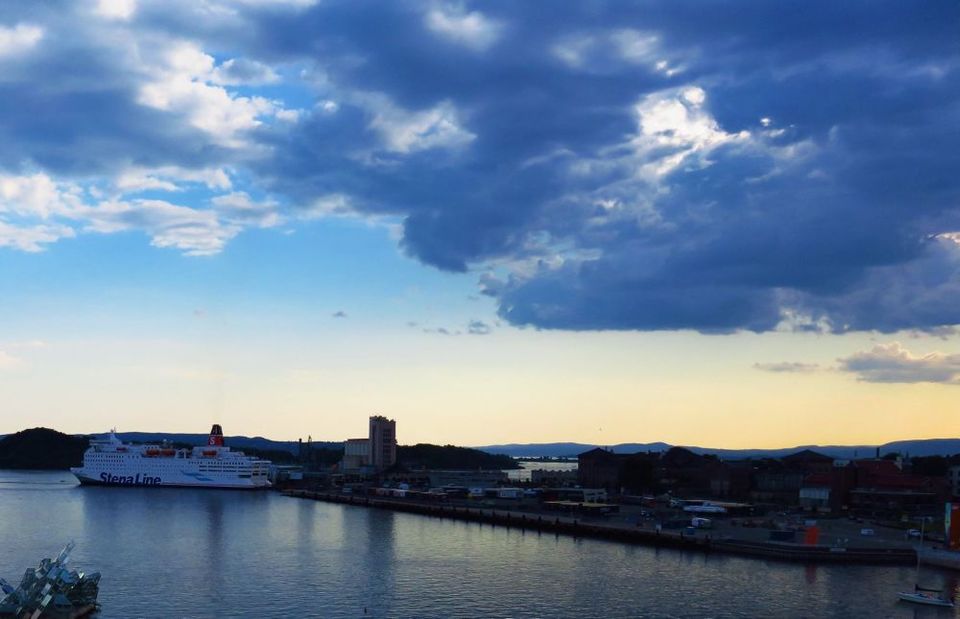 Trip first published on Chronicles of a Globetrotter