You have taken your usual route as you go down the Coromandel coastline for your daily morning run from your hotel. Today, you decide to go a little further, crossing blush skies and rows of colourful boats. Then all of a sudden you stop short, as an outlandish, antiquated gate with hoary engravings, slowly comes into view. And no, this is neither a magical portal to the fantastical lands of Narnia, nor is it a figment of your imagination.

This is the town gate of Tranquebar, a quiet little fishing village, perched 15 km south of the archaic Chola town of Pumpuhar in rural Tamil Nadu. The portal-like gate, with the royal Danish insignia etched on it, takes you back to an different era altogether – that of a former Danish colony.

Till the early 17th century, Tranquebar was known as Tharangambadi, which translates to ‘land of the singing waves’. Years later, the Danes changed the name to Tranquebar, due to the perplexing pronunciation of the previous name. 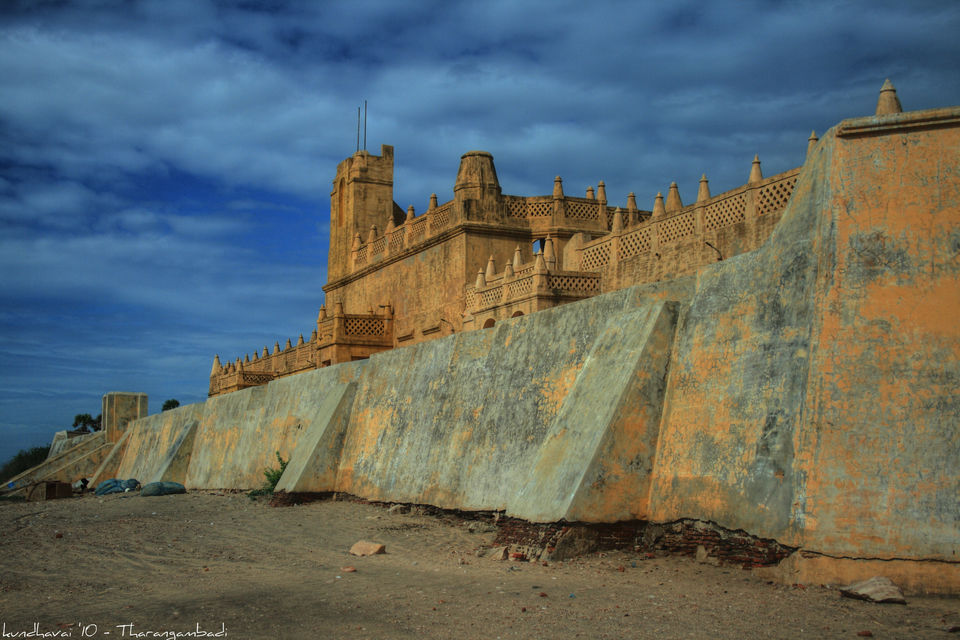 In 1618, a man named Ove Giedde, a Danish admiral came upon the village, and fell in love with the calm shores of Tharangambadi. Trading rights were acquired from the then Maharaja of Tanjore, and a fort was built for the continuation of their spice trade.

In the beginning of the early 1700s, a German Lutheran missionary, Bartholomäus Ziegenbalg set up a printing press in the village and translated the Bible after mastering Tamil. With a Bible in hand, his magnificent golden effigy towers over the bend of the King and Queen Streets.

In 1842, the trading rights were sold to the British East India Company, when the Danish could no longer afford to maintain overseas colonies.

In the 2004 tsunami, almost a tenth of Tranquebar's population was wiped away. The predominant families of the fishermen, presently occupy mass government housing on the outskirts of the village and the battered European and Indian architecture is being restored by a few private organisations such as the Danish Bestseller Foundation.

Something for every kind of traveller 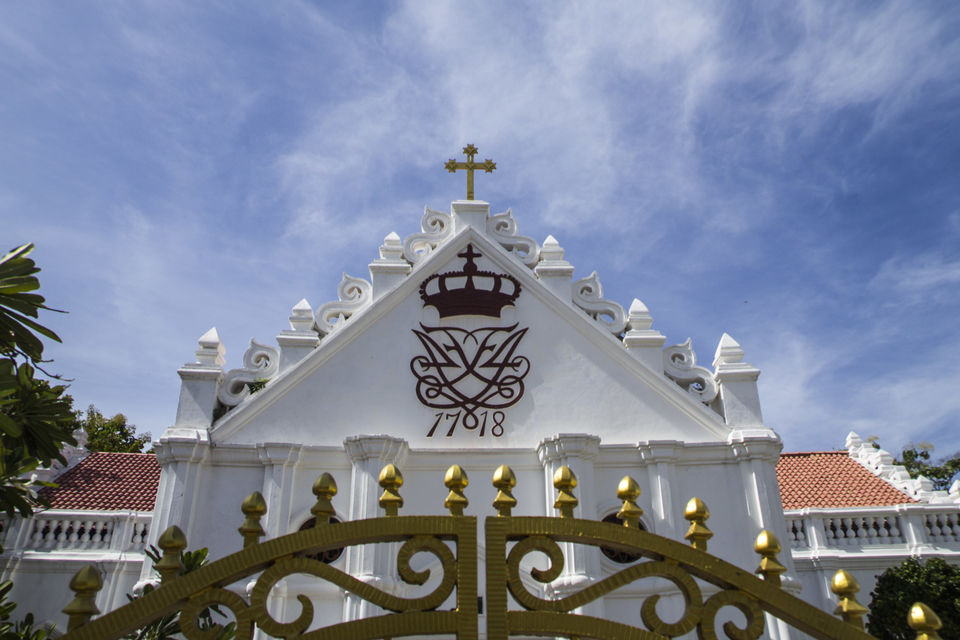 For the history aficionados, start walking down from the town gate (Landporten, in Danish). First up is King Street (Kongensgade) with its colonial buildings, stucco walls, majestic churches, a fort and carriage porches. On the western end of the street, lies the statuesque Rehling's House, with a colonnaded facade, belonging to the then Danish governors. Neighbouring it is the Van Theylingen House, housing a small maritime museum. On the southern end, lies one of India's first Protestant churches, the Zion Church. The ramshackle structure is an amalgamation of both Indian and colonial architectural styles. The New Jerusalem Church, home to Bartholomäus Ziegenbalgis mausoleum, is situated right opposite to Zion, built when German missionaries arrived in 1718. 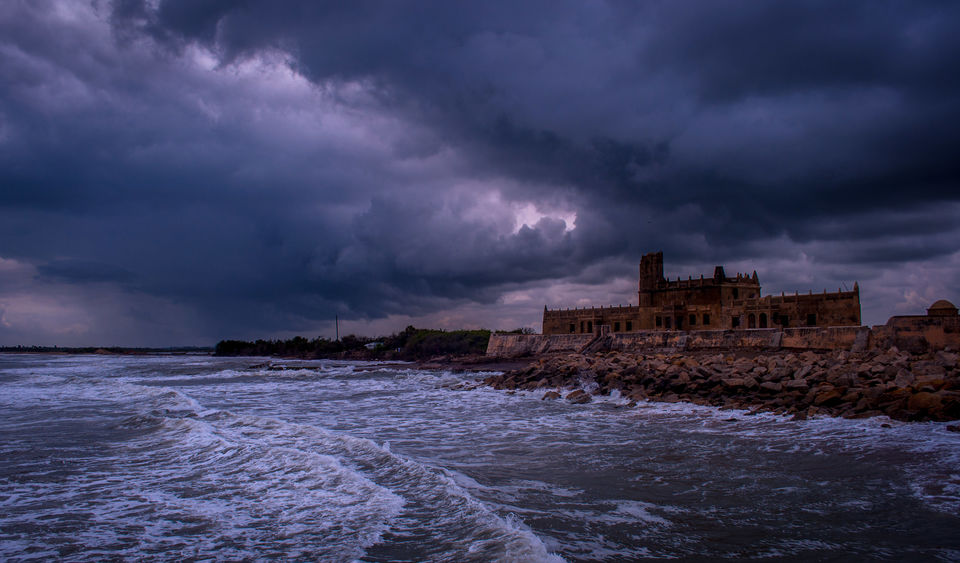 King Street's eastern end houses the beach facing Fort Dansborg. The beautiful mustard coloured Scandinavian fort is surrounded by food vendors and ice-cream stalls. The fort has stone walls, and mounted canons – heavily influenced by old military structures. Once home to the governor and other politicos, it now exhibits an odd range of items – whale skeletons, fossils and ancient coins etc. The ancient Masilamani Nathar Temple built in 1305, lies on the beachfront at the southern end of Tranquebar. Complete the walk on the Kavalamettu Street, parallel to King Street at the haunting Danish Cemetery. Even today, names of several Danish colonial officials and tradesmen can be found carved into the whitewashed headstones. For further details, you can find a walking map taking you through the town, here. 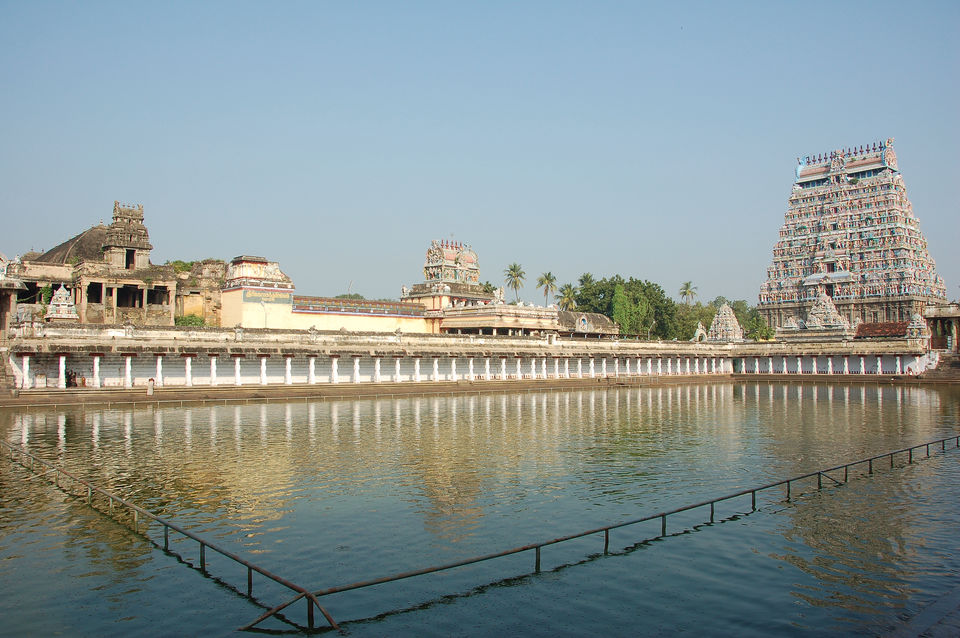 For travellers in the quest of some spiritual awakening, Tranquebar is surrounded by numerous revered places of worship. The Saint Hazrat Meeran dargah in the coastal town of Nagore, is a mere 40 minutes away from the village. People believe the water of the holy tank to posses medicinal properties. In Thirukkadaiyur, 30km away, is supposedly the site where Yama, the god of death was annihilated by Lord Shiva. In Velankanni, 38km away, lies Lourdes of the East, a Christian town that is a shrine Basilica of Our Lady of Good Health. Around 45km away lies Chidambaram, housing temples to the dancing god Nataraja. 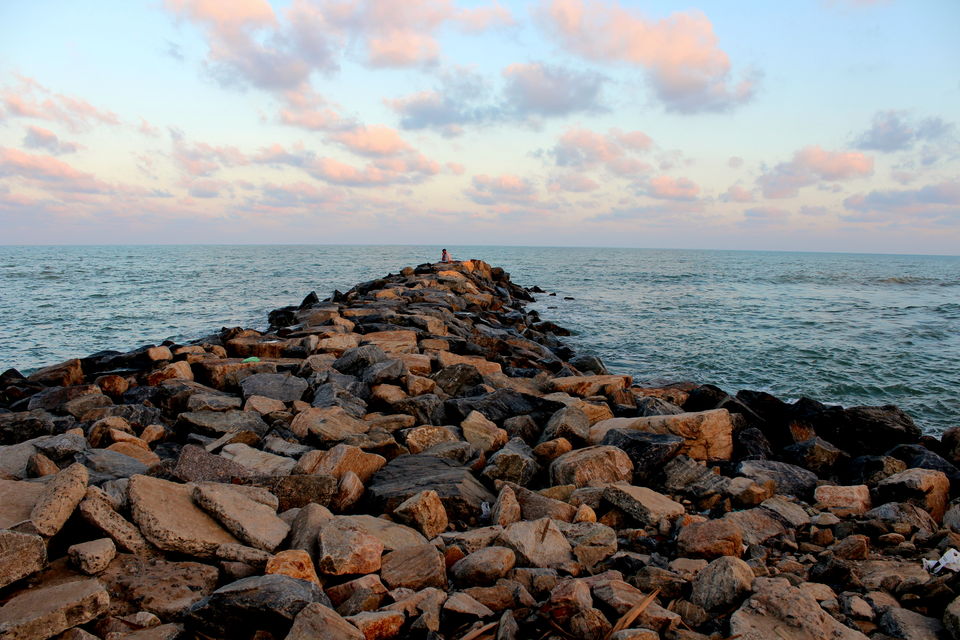 Tranquebar is also a haven for leisure seeking crowds who come to the historical oddity to embed into memory the cries of the sea gulls, the wind-songs of the swaying palms and take spontaneous strolls through the thatched cottages. If all the above still doesn't whet your appetite, you can also hop aboard a boat to Uppanar River, a short ride away from the Fort Beach for a quiet picnic on an isolated island.

Where To Stay: There are three Neemrana properties in Tranquebar - The Bungalow On The Beach, The Gate House and The Nayak House. A budget guest house run by the Tamil Nadu Tourism, Hotel Tamil Nadu, offers neat and basic accommodation.

The Bungalow on the Beach 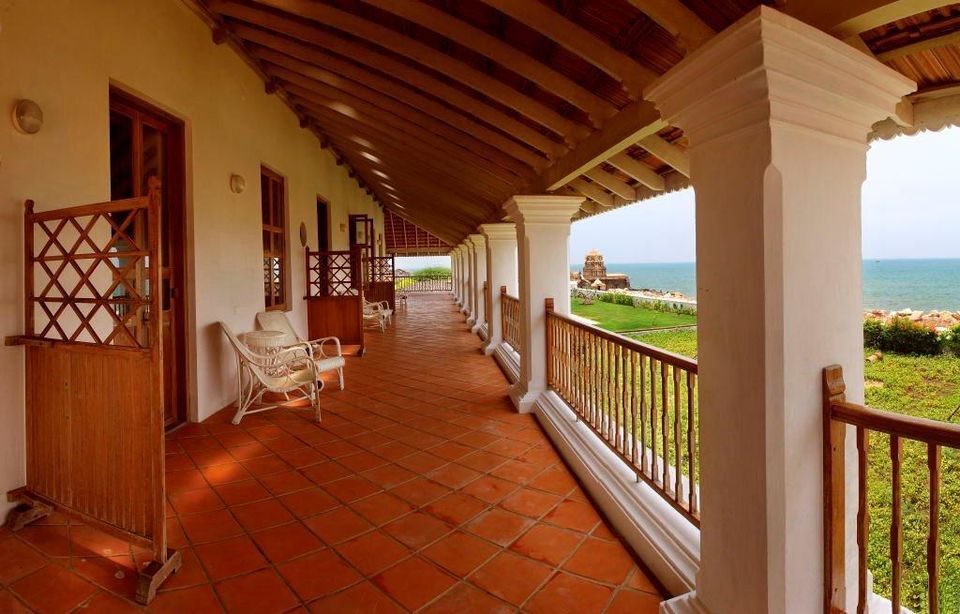 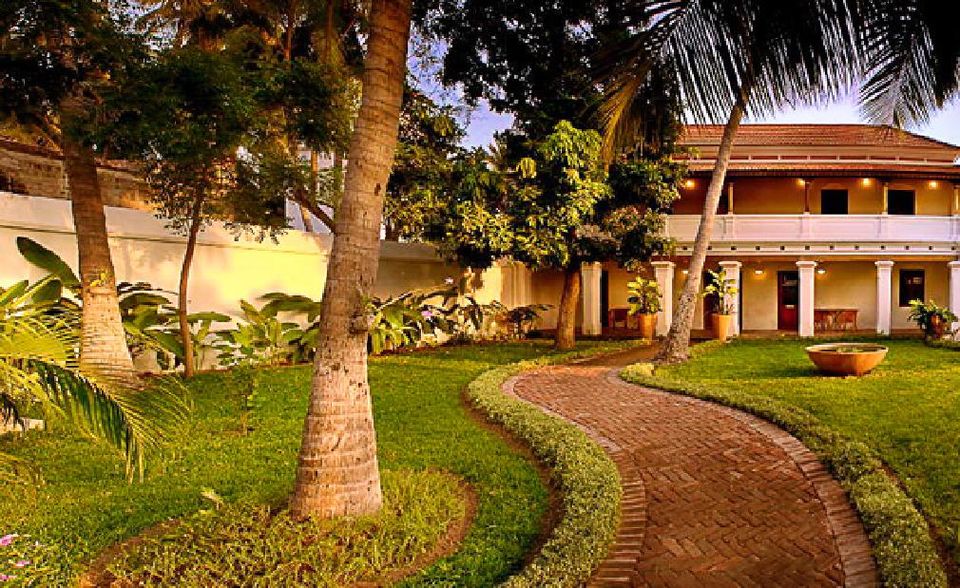 Where To Eat: Any and every seafood dish is on the recommended list. There are a few popular eating joints outside Tharangambadi and some on Market Street right before entering the Tranquebar gateway. Restaurants inside Tranquebar being limited, there only two options inside the village premises – The Bungalow On The Beach for a mix of Indian and continental fare and Hotel Tamil Nadu for authentic Tamil cuisine. 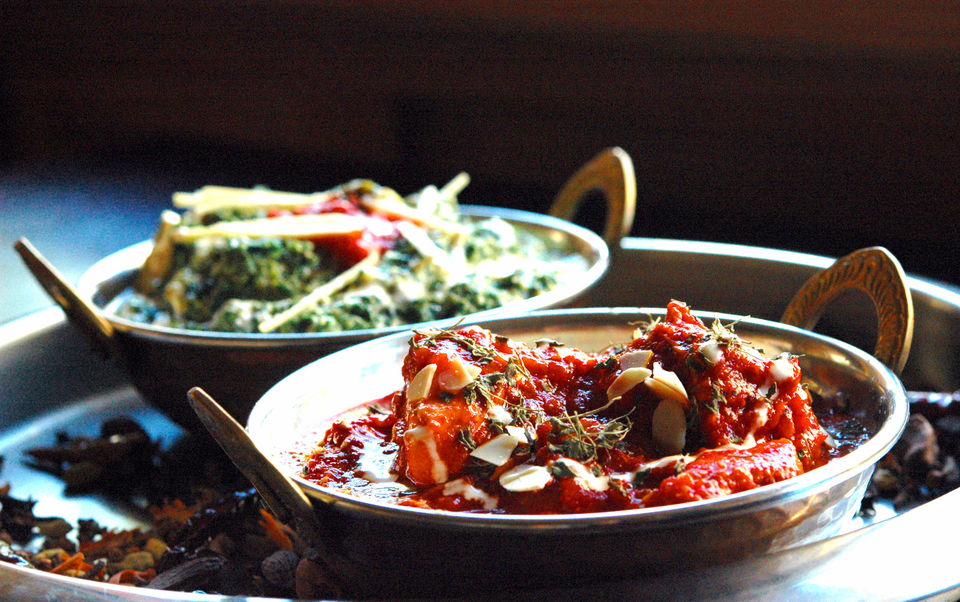 By Air: Daily flights operate from Chennai to Trichy, which is the nearest airport. Tranquebar is approximately 4 hours away from the airport and can be reached via taxis.

By Rail: Nagapattinam and Chidambaram are the nearest stations. The overnight Nagore Express from Chennai is the best route to opt for, to reach Tharangambadi.