How Katra And Patnitop Stole My Heart

Some trips can take you down the memory lane like no other, and those trips would make every beautiful memory related with them to re blossom in your mind and give you a reason to smile every once in a while.

I went to one such trip last year (2015) in the month of January, along with two of my close friends Vaibhav and Rishabh. The destinations we were going to embark upon were Katra and Patnitop in the northern most state of India, Jammu and Kashmir.

Katra is a sacred town popular for its famous Vaishno Devi Temple, which is situated on its Trikuta mountain. On the other hand Patnitop is a hill station known for its natural beauty and unmatchable scenic views.

Me and my friends had started planning for this trip in December of 2014, and got our train tickets booked for 21st of January 2015. The main purpose of our trip was to visit the famous Vaishno Devi Temple, and to experience a white winter, which neither of us had ever seen before.

Though our families (specially mine) were against our plans to visit mountains in winters, there was no way we could have let them spoil our plans.

So finally on 21st January 2015, our date of departure arrived. We reached New Delhi Railway Station by 4 p.m., and our train Shri Shakti Express was already parked at the platform. We boarded the train and soon it started off for Katra. The journey was a blast and soon we were ruling the two compartments like Kings, as there was no one in our compartment except us and even the compartment next to ours was totally unoccupied. We played music, ate food, shared many fun moments and what not. None of us slept during the entire course of journey, and we would regularly look out of the window to know our whereabouts. By around 4 a.m. , our mobile signals were completely gone (yeah the prepaid networks do not work in Jammu and Kashmir), and outside the window a few small hills had started to appear. As the train moved, the hills started to get bigger and more bigger.

At 4:30 a.m., we reached Katra, and as we deboarded the train, a very beautiful and well maintained Katra Railway Station welcomed us. The cold in Katra was such, that Delhi's winters seemed like a toddler in comparison.

Trikuta Mountain in the backdrop, on which famous Vaishno Devi Temple is situated. 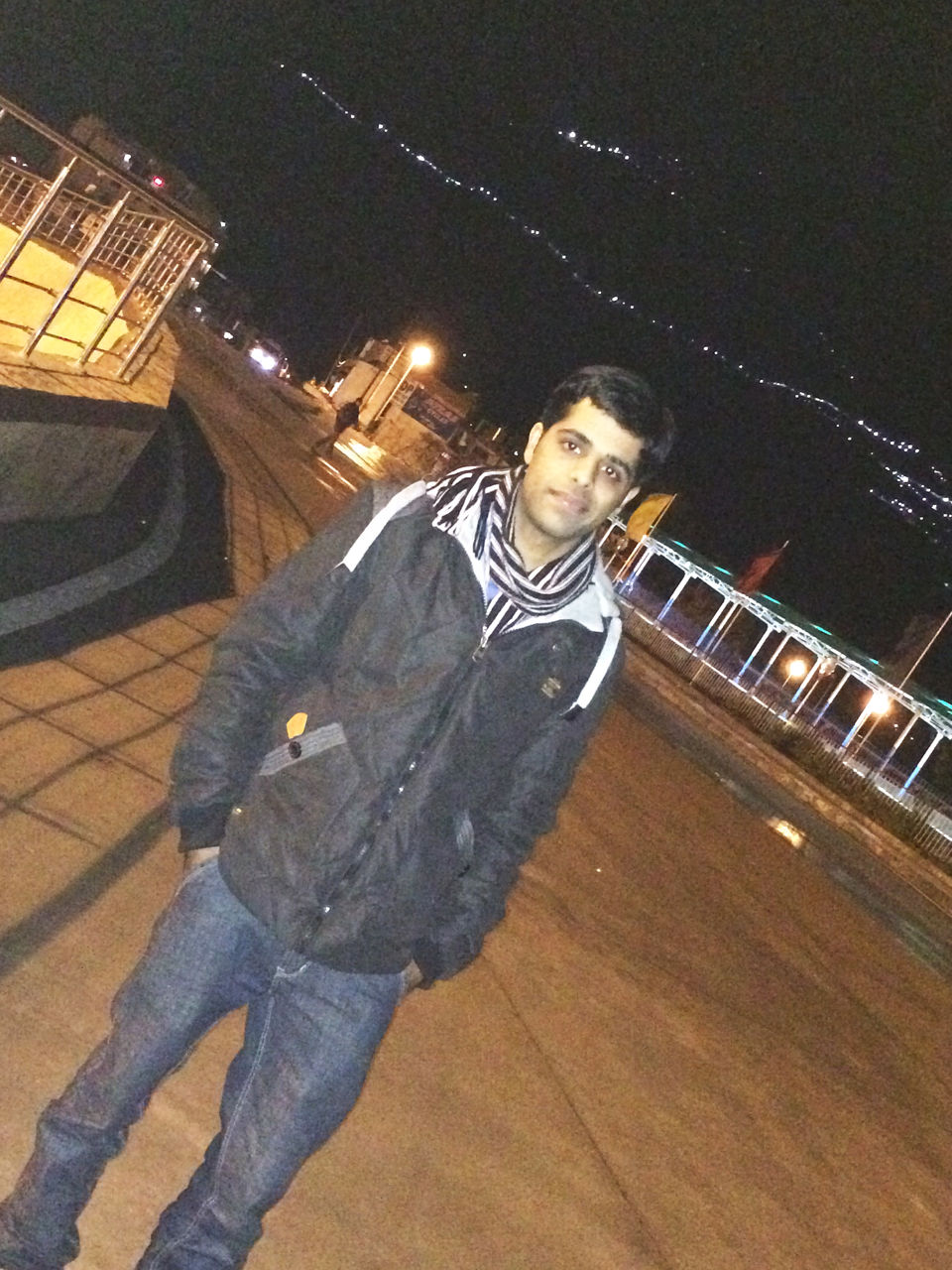 After getting into warmest of our clothes, we submitted our luggage in a cloak room located inside the station premises. Later we approached the registration office and got ourselves registered for Vaishno Devi yatra, which is a mandatory process for everyone. After the formalities, we headed towards the base of Trikuta, from where the yatra officially begins. Initially we saw a number of shops lined up selling sacred things and souvenirs, which gradually decreased as we moved our way up. We hoped to complete the 14 kilometers of walkable journey as soon as we could and challenged each other to see who would perform the best.

As we moved ahead the snow covered peak of Trikuta started to appear from every alternate turn, and I was unable to hide my excitement as even a view of a snowy peak gives me extreme thrills and freshens up my long lived desire of climbing Mt. Everest one day.

A Cinereous Vulture sitting on a tree branch. 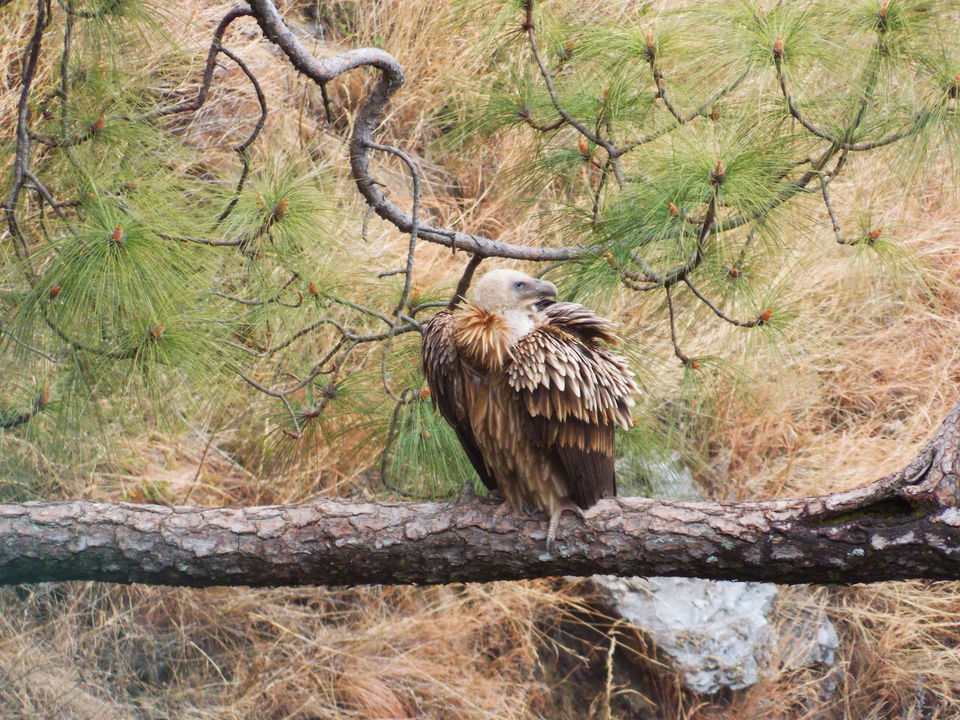 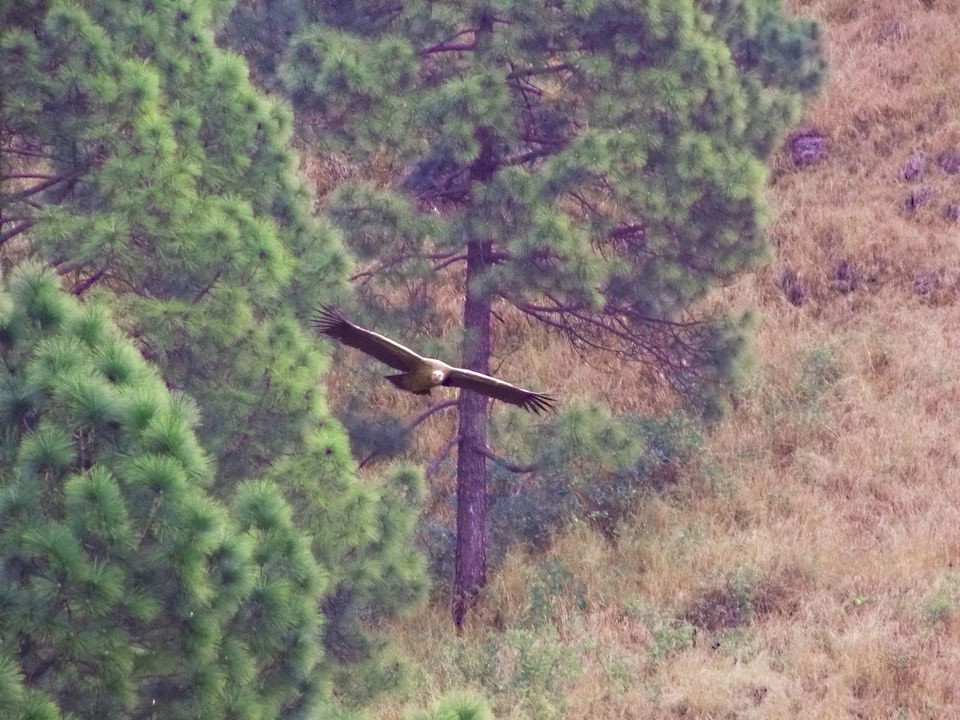 Fuelling up our experience was sighting of a few small species of deers and even Cinereous vultures (which my father used to claim had gone extinct in India, and now I have photographs to prove him wrong).

Many pilgrims walked on the path chanting "Jai Mata Di", praising the goddess Vaishno Devi, and they all shared the same enthusiasm as we did. Midway up one of my friends started to feel pain in his legs, but thankfully managed to complete the journey till shrine.

Vaishno Devi Temple as seen from a distance. 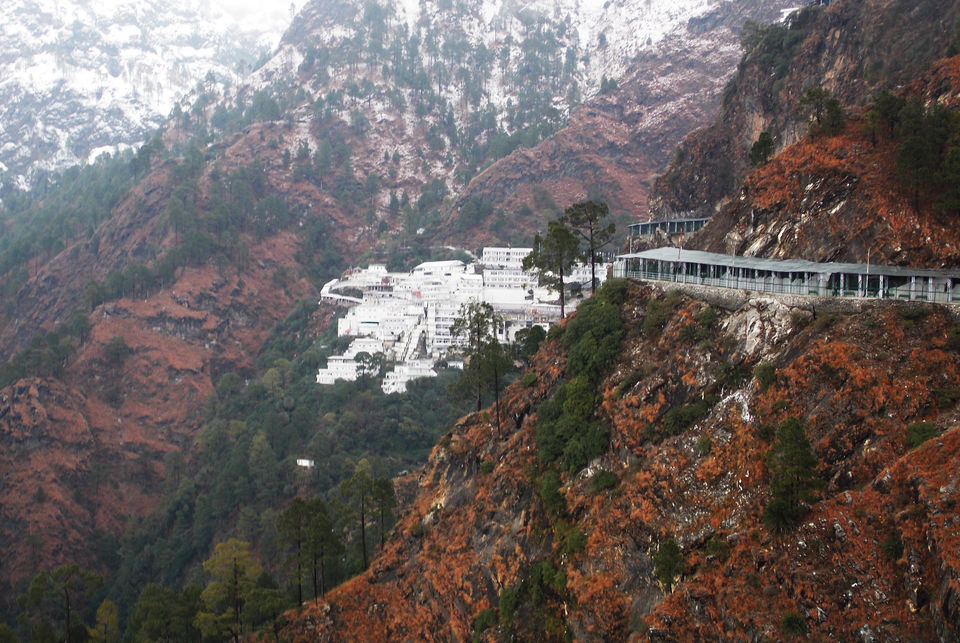 Way to the temple 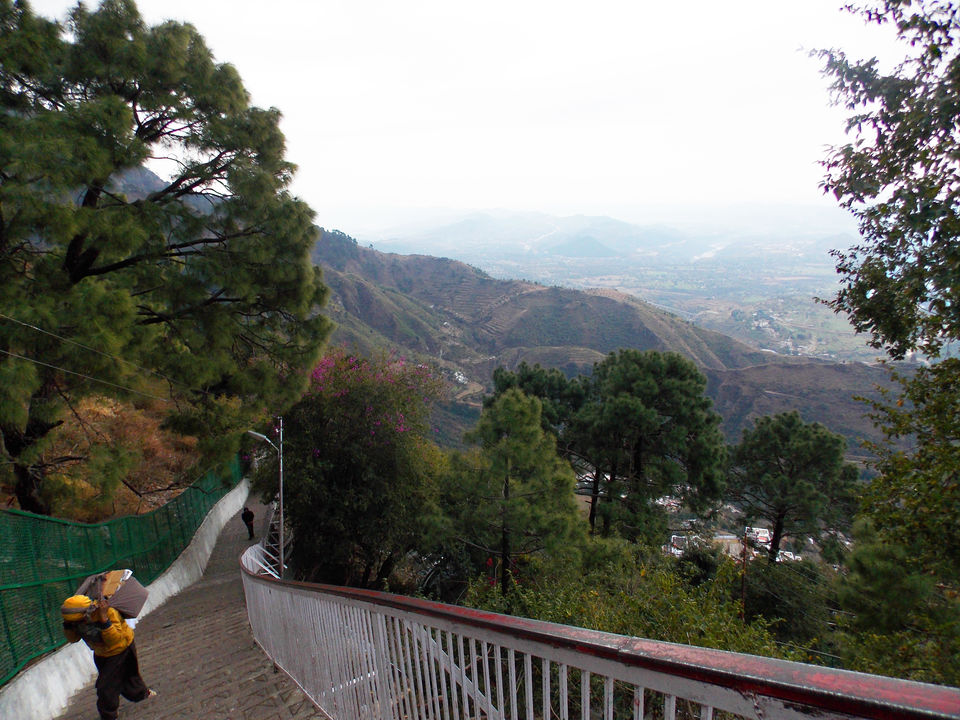 The temple looks extremely beautiful from outside as well as inside, and the experience of walking inside those ancient narrow caves and the divinity one can feel there is a bliss. After spending a few moments in the temple we decided to go further up, to the Bhairon temple. On the way up, we started to see tidbits of snow which was not enough to get into a snow fight but we surely did manage to have a little fun by putting it inside each others clothes.

View from the way up to Bhairon Temple. 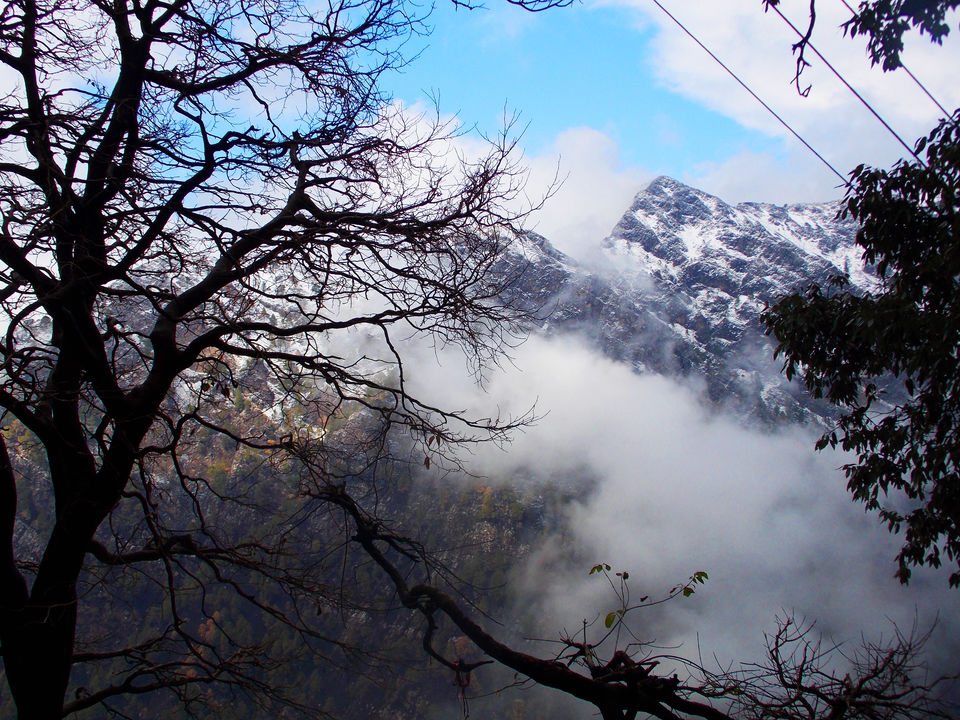 Breathtakingly beautiful view, the air quality of the area was immensely pure. 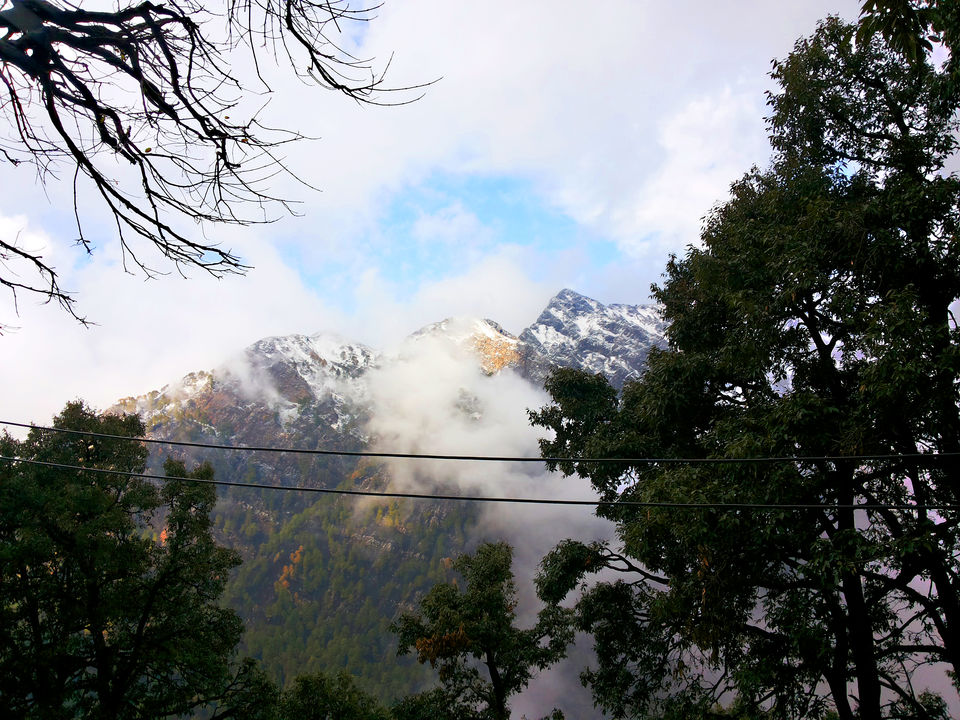 Visiting Bhairon temple was a great experience too and the view we got from there was worth anything. A unique thing that I witnessed there was that Monkeys and Gray Langurs coexisted with each other, which is very surprising since both the primates are believed to be a stern enemy of each other.

A monkey posing for me. 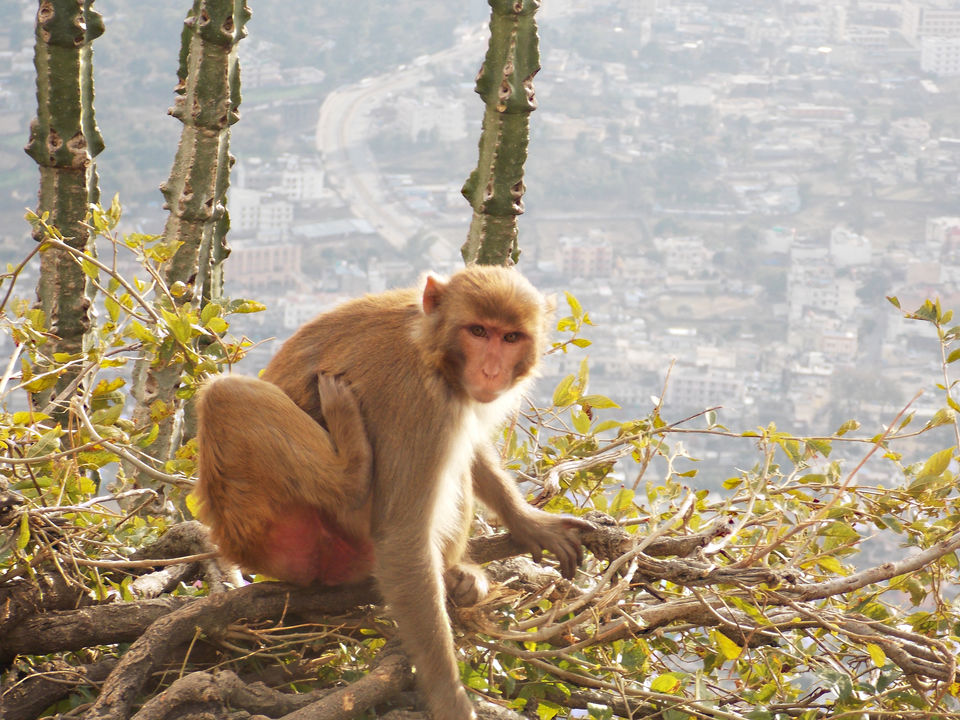 Gray Langur with a monkey. (Just kidding, that's me) 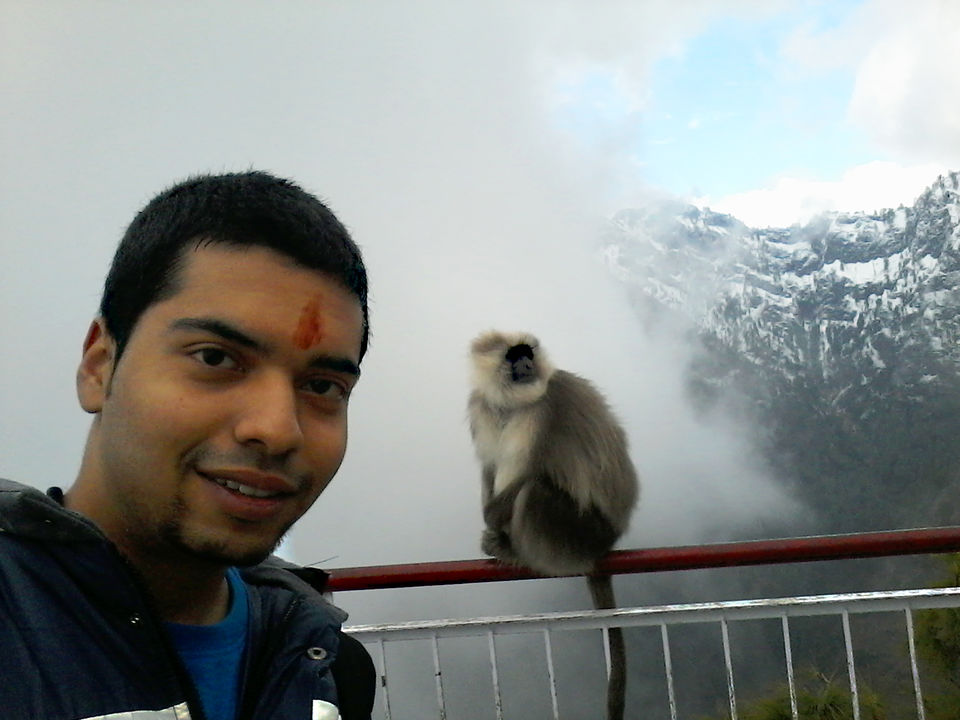 After taking Bhairon Baba's blessings we started our descent walk. This time both of my friends were struggling to keep a pace with me and were experiencing severe pain in their legs. Though I had to carry most of our stuff while going back to Katra, I still felt elated being the eventual winner of our challenge.

A self timed shot 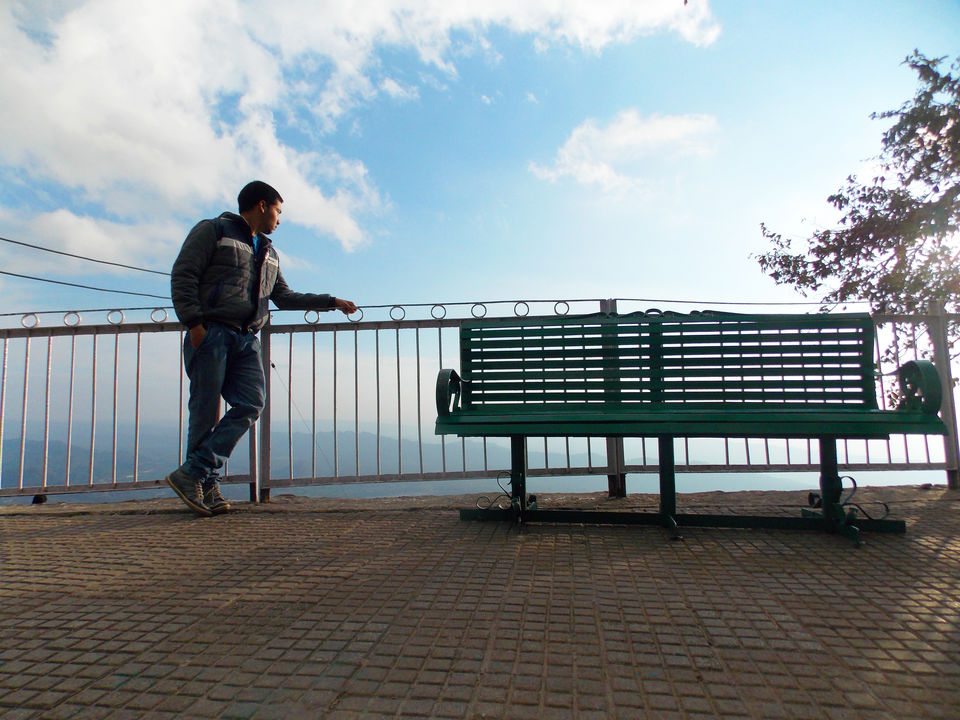 We came down to Katra around 6:30 p.m., and booked a room in a hotel. After resting for nearly an hour, we brought back our luggage from the cloak room and went out for dinner at a restaurant. The food served was delicious and very reasonably priced. Filling up our stomachs to the max, we visited a local cab agency and booked a sedan for our next day of voyage to Patnitop. Then we just returned to our hotel, got into our room, threw the shoes aside and slept our hearts out.

Next morning (23rd January 2015), our cab arrived at the hotel by 11 a.m. Before leaving, I informed my family about our plan to visit Patnitop from a local PCO, while the other two didn't care to inform theirs.

Patnitop is approximately 85 kilometers from Katra and takes around 3 hours to be reached by road.

We loaded our luggage into the car's boot and set off for our destination, Patnitop. The pretty Kashmiri people and beautiful orchards kept us glued while we looked out of the window, but slowly the beauty of more majestic mountains started to outgrow everything else in sight.

We stopped and ate at a small restaurant and the food tasted quite good, though we found it a little overpriced this time. After lunch we once again hopped into our cab, the driver by now had switched on the music, and for the rest of our journey we only listened to Kumar Sanu's songs.

As we got closer to Patnitop, snow clad roads and peaks started to appear on the way. Slowly the white color started to dominate over other colors, and soon we were driving through a slippery road with snow covered gardens on our left side. Finally ! We were in Patnitop. We asked our driver to stop near a snowy garden, and finally we got to play snowball fight like there was no tomorrow.

Beautiful cottages near a snow field. 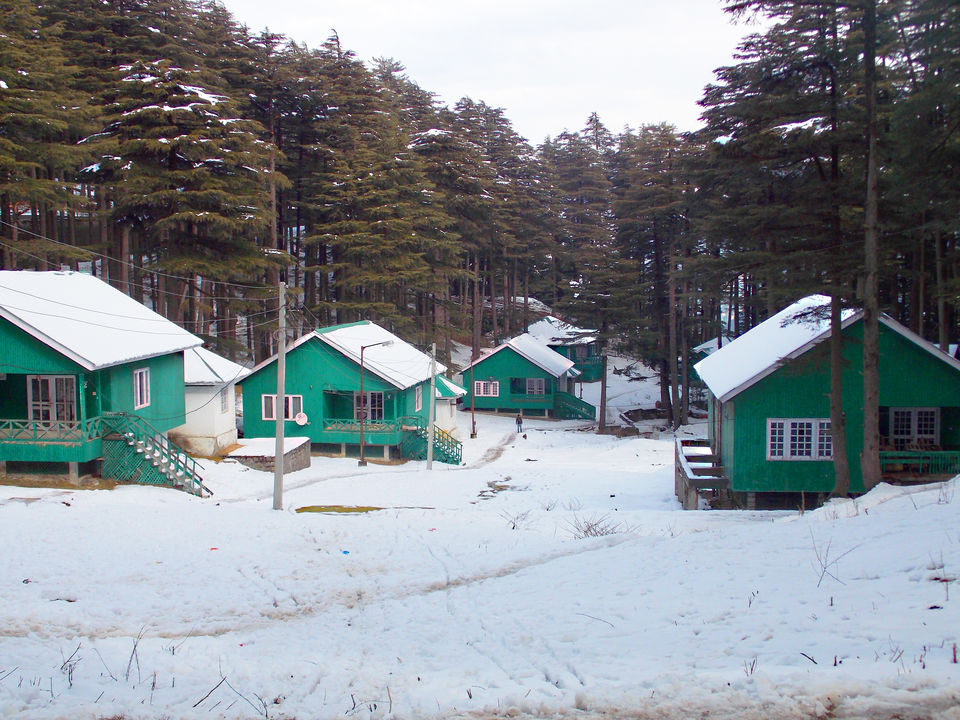 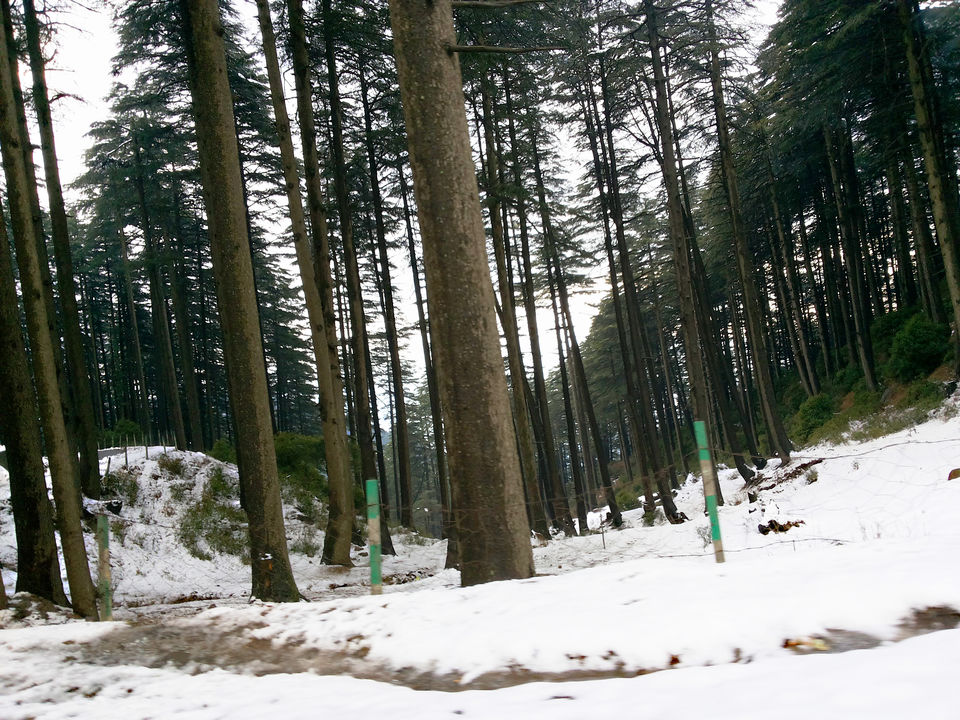 There were many people who were enjoying the fresh snow which had fallen just a night before our arrival. The great snow mountains looked magnificent both in size and beauty, and there is no denying that my love for them increases every time I look at them.

Amusingly, we found a Golgappa seller in the garden and GOD they were one of the best golgappa's that I had ever tasted. 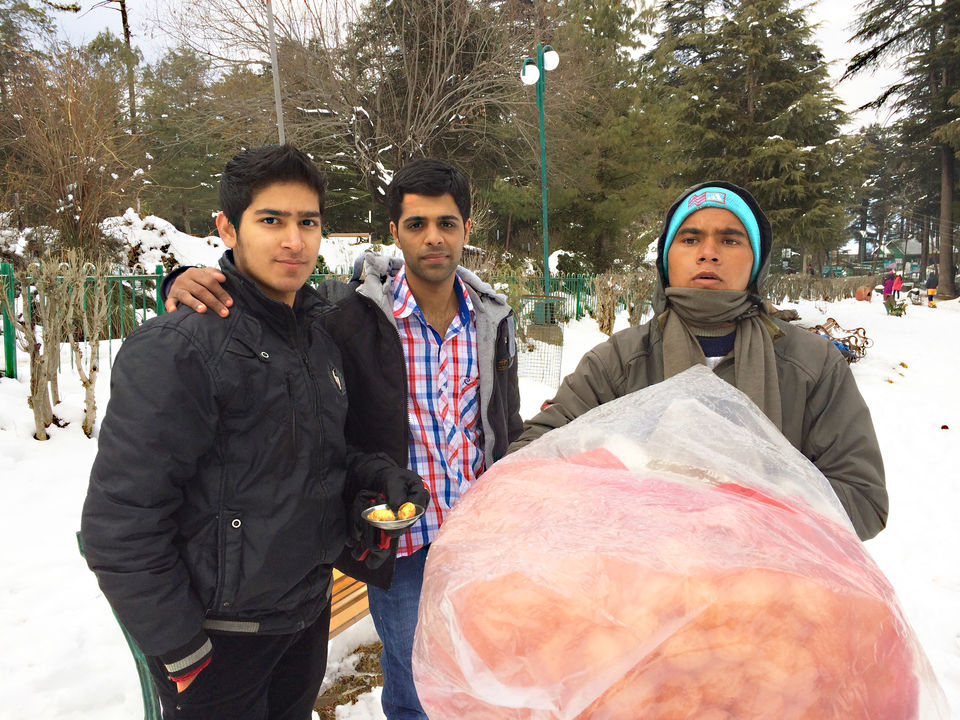 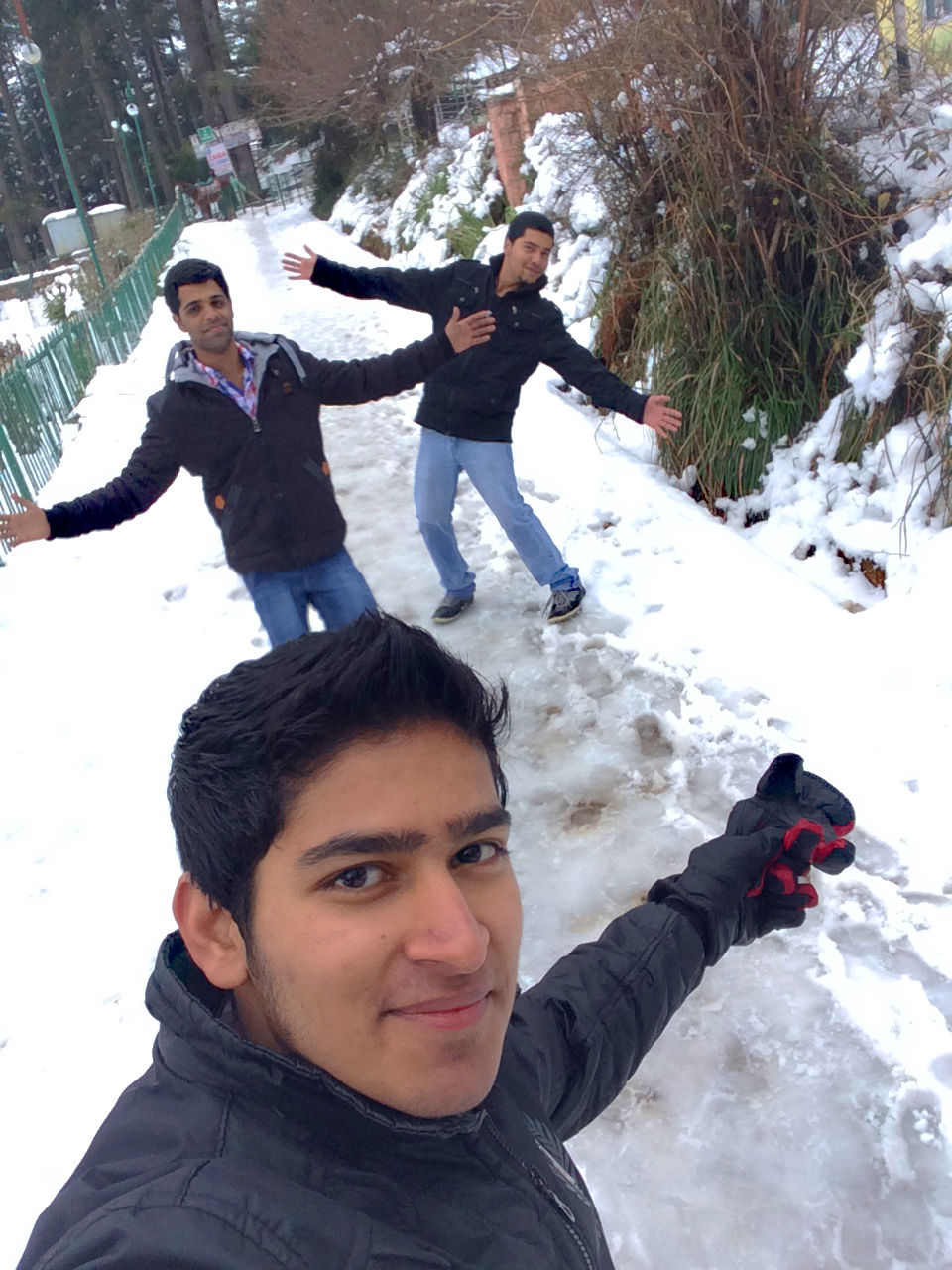 After spending some leisure time in gardens, we headed for a hotel hunt and soon checked into the one which offered us a fine room with an amazing view at a fine price. We entered our hotel room, dumped our bags in there and instantly moved out. Roaming around the area, clicking scenic views and relishing on some local foods, our day passed away. 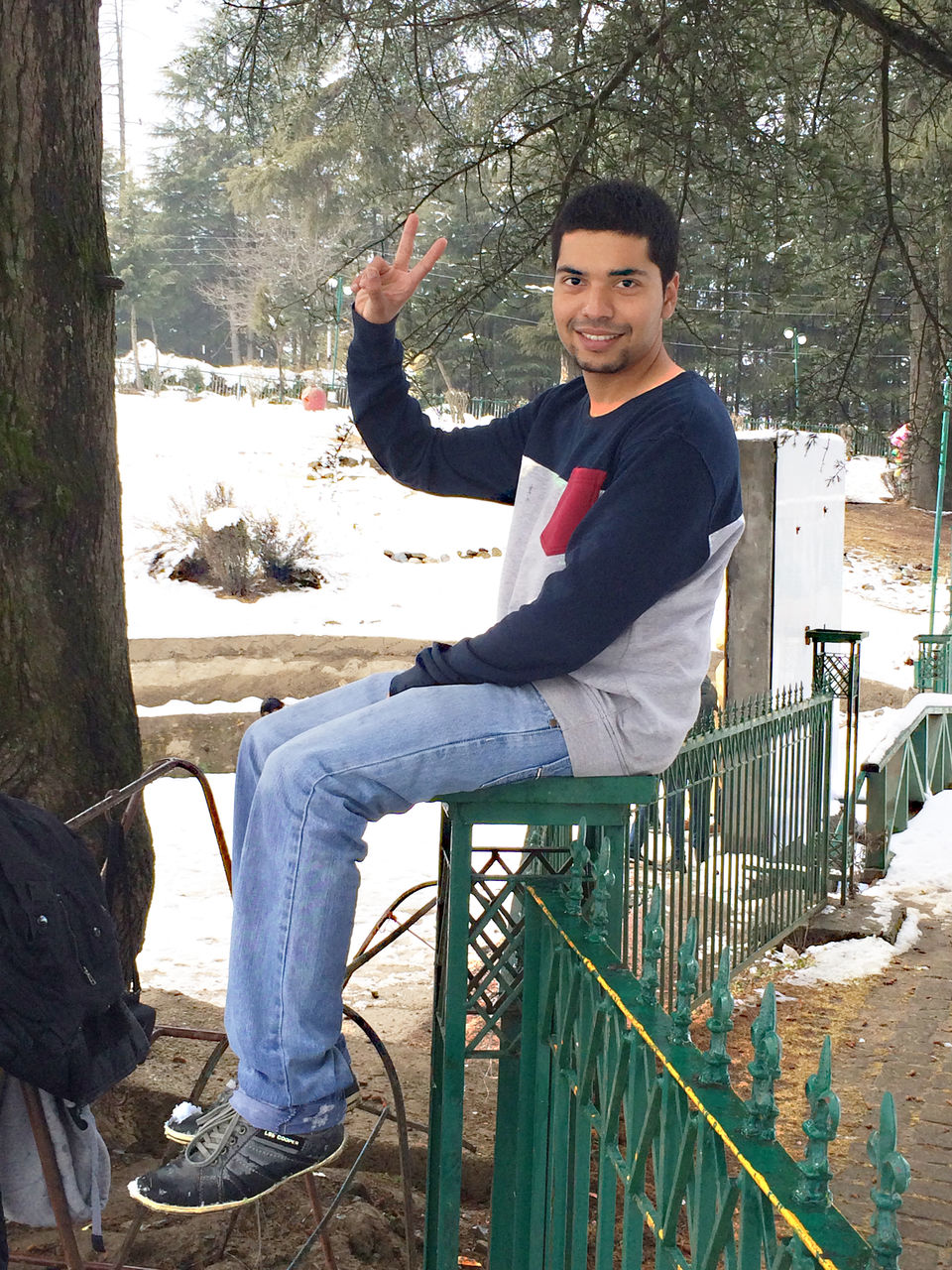 No matter how beautiful this hill station looked during the day, it was actually the night that turned every nook of Patnitop into a magical paradise. The moon's soft light was making the snow glow to its full glory and it definitely was a sight to behold. After a light dinner in a local eatery, we went back to our hotel, got drunk and had some crazy moments & conversations, though not remembering how or when we fell asleep.

Next morning (24th January 2015), the cold climate had been so intense that coming out of our quilts seemed like the most difficult thing in the world, but somehow we managed to leave the bed. After some breakfast and getting ourselves ready for another adventurous day, we left the hotel and went to Nag Temple, which was just a 10 minutes drive from our hotel.

Subsequently we visited two more gardens where we had lot of fun. We also made a snowman and even made our own "chuski", made out of natural snow and Pepsi.

Chuski made out of Pepsi and natural ice 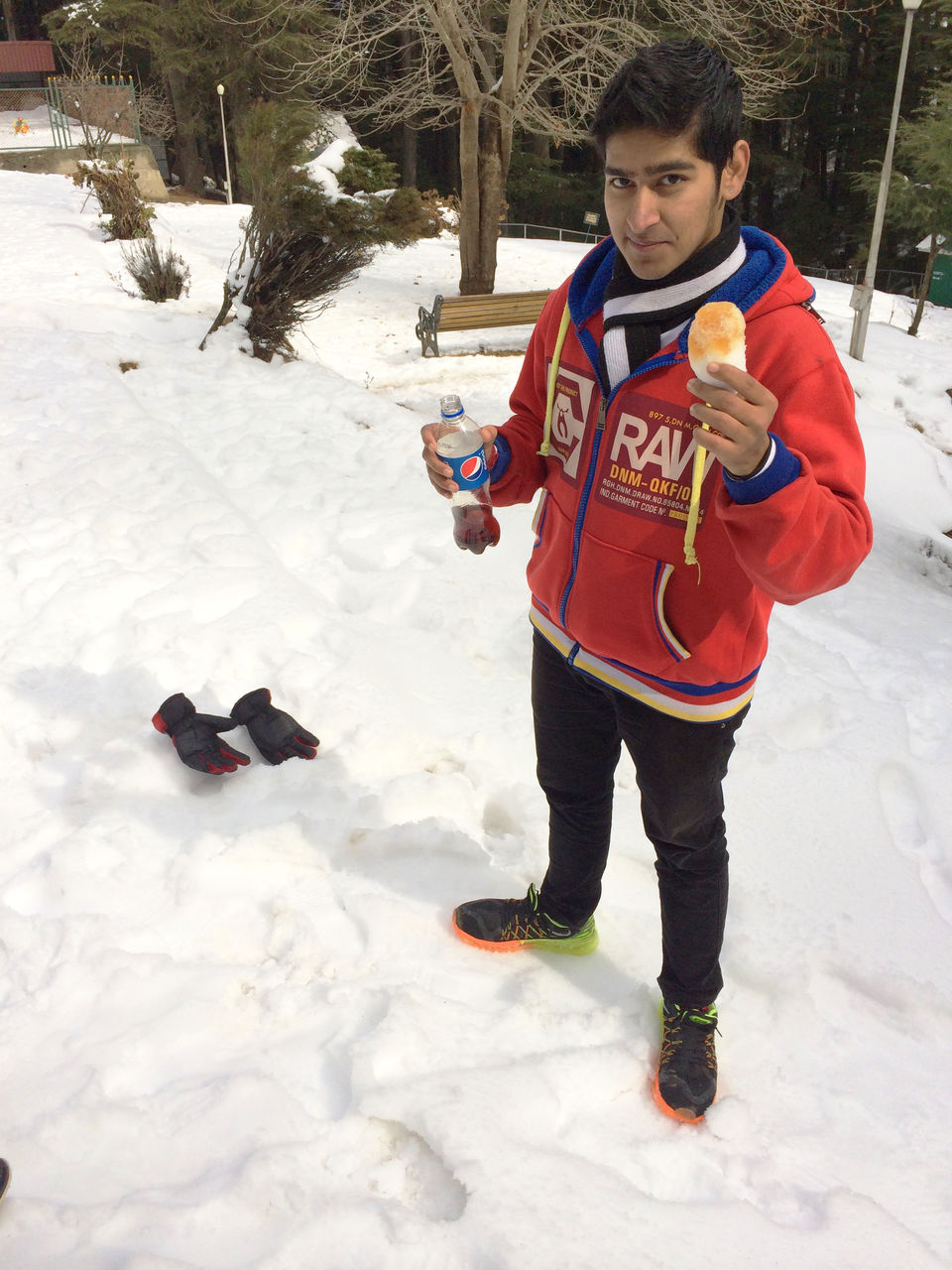 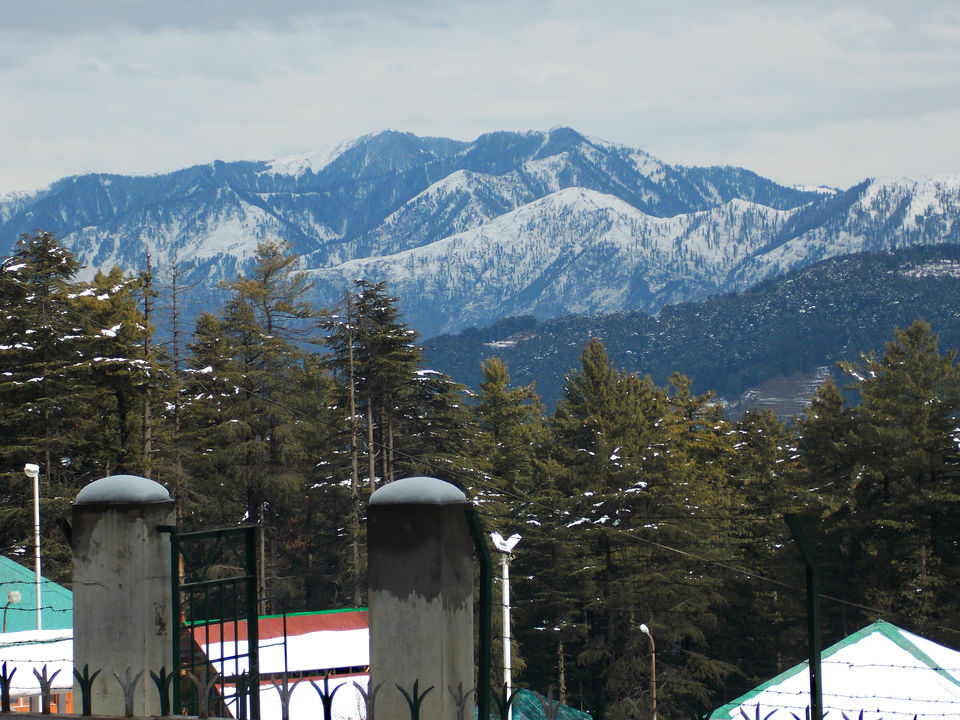 My head stand in snow 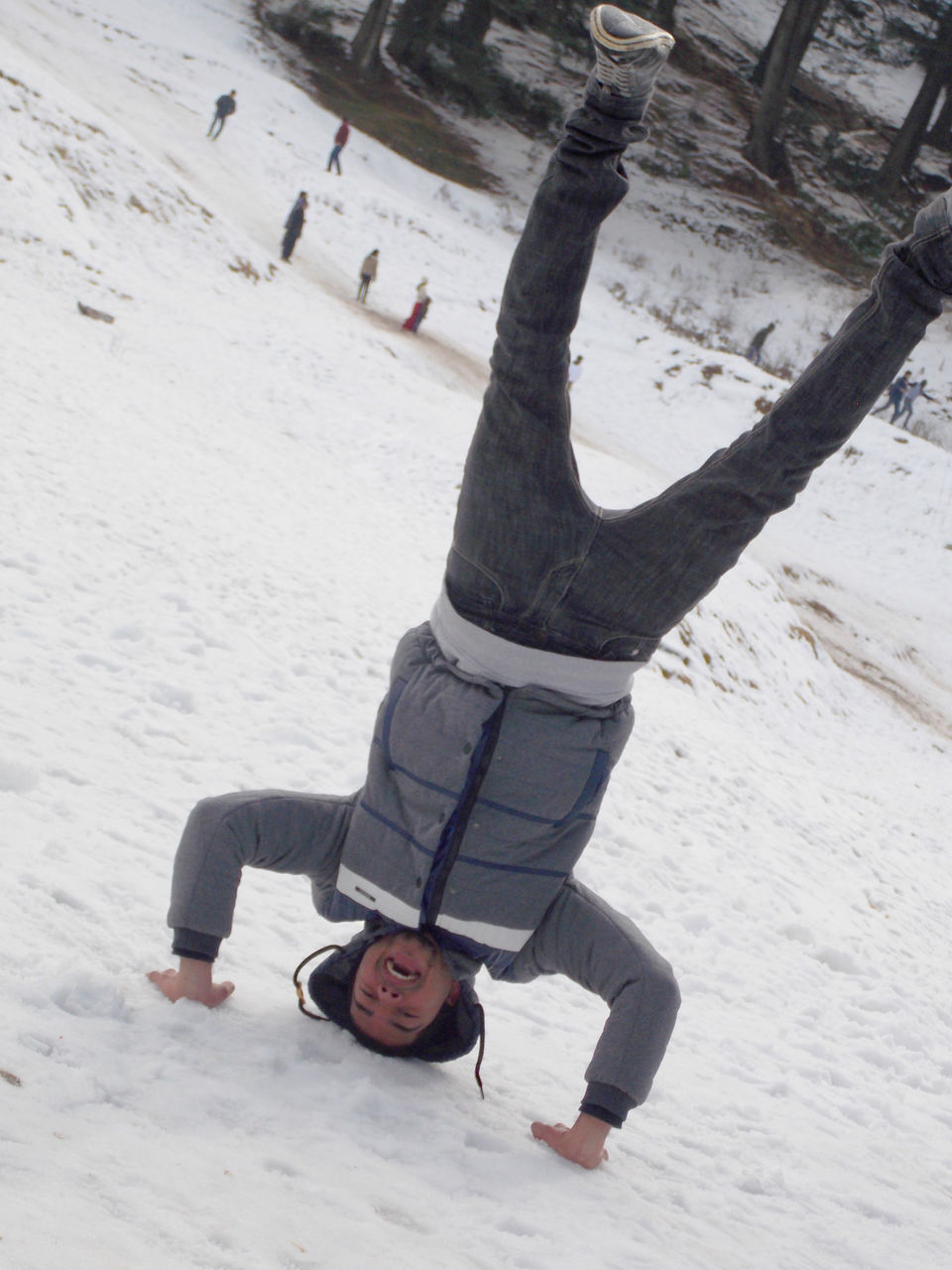 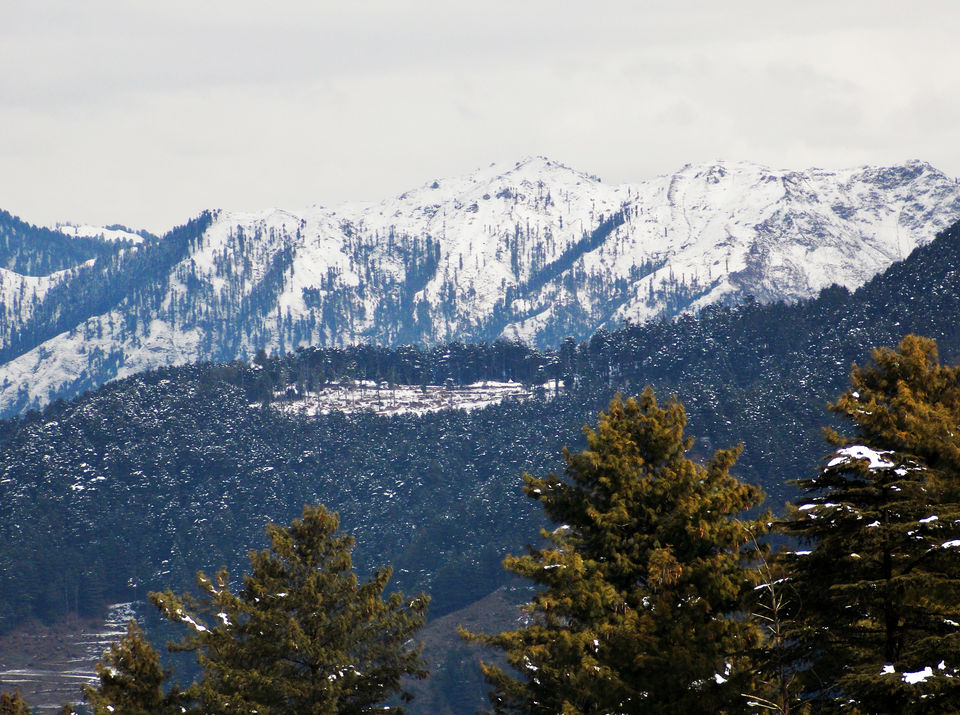 Gathering all our memories into our heads and camera's, we left the beautiful Patnitop at 4 p.m. and reached Katra by 6:30 p.m. Our train was supposed to leave for Delhi in two hours, so we had sufficient time to eat some food. We also purchased some souvenirs and Katra's famous dry-fruits, before finally reaching the railway station. Around 8:30 p.m. we got into our train, and soon enough as the train started to move, we said our goodbyes to an unforgettable experience, taking with us the beautiful memories that we will cherish for a long time.