Trust a tradition with fabled moorings to find a firm foothold in Varanasi. Kushti, a form of ancient Indian wrestling, goes back over 5,000 years in the city. The origins of the kushti akhara* where kushti training is given, has been attributed to Parashuram who plays a stellar role in the Indian epics Ramayana and Mahabharata as mentors to exemplary warriors Bhishma and Drona. Today despite grappling with paucity of patronage and dwindling public interest these akharas are brimming: mud-splayed muscles are engaged in nimble heaving, limbs entangled in the pummel, grunts from somewhere beneath submission holds and the stern whistle of the danda-bearing instructor marking bouts.

At one time there were about 30 akharas in Varanasi and most of them were near the famous ghats. The prominent ones today still are. One can walk into any of these without prior permission – despite the burly physiques and intense lineaments these gladiators are quite friendly and camera savvy. One even showed me the best way to shoot the mace – placed across his own fine toned pectorals and biceps. Win-win. While the rest of the A-team continued their warm up sessions without missing a beat: lithely scaling the lanyard hung in the courtyard with the ease and pace of a lizard. Not one succumbed to that predictable bit of jocose jostling or self-conscious ribbing when surrounded by many cameras and pretty faces (I wasn’t the only one). Training in the akhara I visited progressed in two levels, spanning two schools – traditional kushti on the ground floor, on the specially prepared mud; while novices thudded across the shiny mat on the first floor along more modern freestyle Olympic moves. With renewed government interest in the sport came financial incentives and many youngsters are flocking to the akharas. The two who sat along the fringes of the mat weren’t gawking gawpuses but were gathering their breath. Promise hung in the air.

Some, slightly older, men sat a little removed from all the action. No, they hadn’t come to see the tourists but were doing their own thing: reading the day’s paper and sipping cutting chais. Not to say there are no hangers on who come to peer closely, rudely at tourists. The akharas exude tranquillity and peace and are generally surrounded by trees with access to free flowing water. This one had shady large pipal and neem trees and even though was right by the side of a busy street once you stepped through the gates, things took an ironic turn. Right by the entrance itself is the ruling deity of every akhara – Hanuman. Obeisance is offered upon entry. Shiva and Ganesha, Ram and Sita can also be seen in some places. The fragrance of freshly watered earth hung in the air – like the first showers of the monsoon. The wrestling pit itself is filled with soft earth refilled at regular intervals from nearby fields. The akhara mud is believed to have powers to cure minor ailments including some skin diseases.

Ghee is reportedly used to soften the mud in the wrestling area – which I was told was not so anymore. There was a time when majority of the akhara patrons were from the Yadav community, predominantly milk merchants. Some akharas here have deep wells from which only the guru is allowed to draw water – used only for drinking. This water is believed to be akin to tonic – with secret powers. Rarely offered to visitors as consumption is not in dainty glasses but litre mugs.

Someone – who was taking the most perfect dolphin dips I’d ever seen – nearly crossfaced me when I asked him whether he smoked or drank. Disport and venery are off bounds to these guys. At least till they get married. Even afterwards conjugal rights are temporarily suspended for weeks before important contests. Inter-akhara competitions are a matter of immense pride and champions become stuff of local lore. Trophies and plaques are displayed proudly in every akhara. Most symbols of modernity are viewed with askance including fancy hairstyles: closely cropped hair massaged with mustard oil is the norm.

Kushti is not a pastime but a way of life. At least that is the way it is intended to be. Exercise, health and diet regimens dominate your life once you join an akhara. There is yoga in addition to the vyayam or workouts with dumbbells and gada (mace). Push ups and squats – by the hundreds – are just warm up. Diet still remains a controversial issue: vegetarians maintained that meat added to excitability and aggression.

“A pehalwan (wrestler) doesn’t even take chaat for its spice and salt,” one of the tour guides told me. “He avoids tea because it contains caffeine.”

I stood no chance.

"Consumption of alcohol and smoking signalled moral – and physical – weakness."

It was time to go.

While visiting an akhara

Take permission from the guru before taking photographs – better not to rub these guys the wrong way. If you are part of a group, permissions will be pre-arranged. Even then a nod of thanks will be nice.

Absolutely no footwear in the wrestling arena – the mud pit or the matted floor.

Try not to chat up the pehalwans while they are training but wait till they finish. Most of them are a gregarious lot who will give you any information you want – from their training to diet, local politics to their dreams.

A wrestler is enjoined to wake at three in the morning, when the air is pure and cool. After drinking a glass of water with lime juice, he is to go out into a forest area or scrub jungle and relieve himself. Although a wrestler is not a doctor, he should inspect his faeces in order to evaluate his health. If it is ‘coiled like a snake about to strike’ then his digestion is in good order. However, if it is loose, then he should consult his guru about a dietary change.

*Akhara is closest to the word ‘school’ and is broadly any place for practice and training usually with boarding and lodging facilities. The akharas generally function under a leader referred to as the ‘guru’ or ‘ustad.’ An akhara may be used for religious or martial purposes; in the latter sense of the term it denotes a training school as well as an arena where they can compete and practice.

HotelsMap
Visit to a kushti akhara in Varanasi 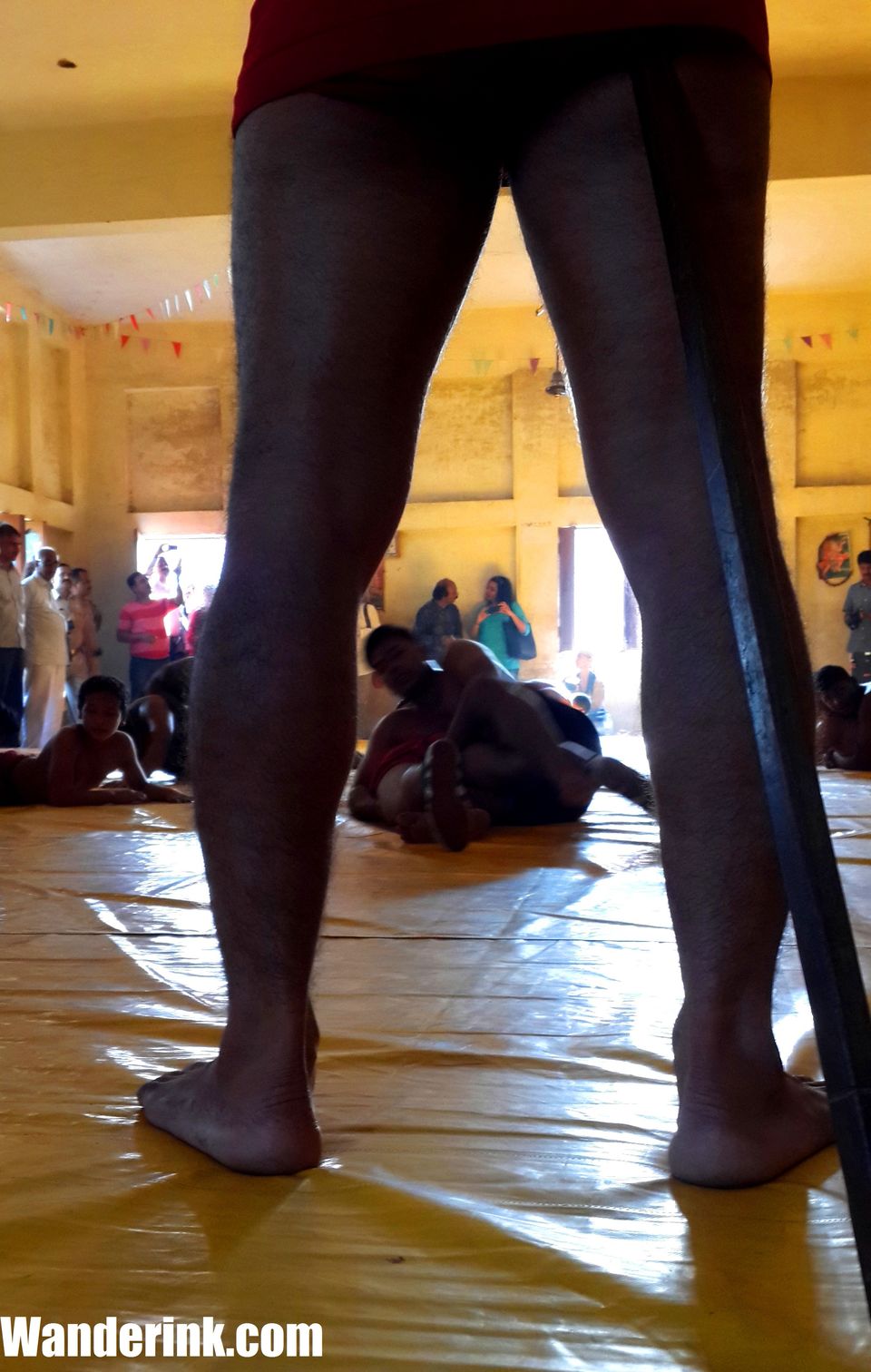 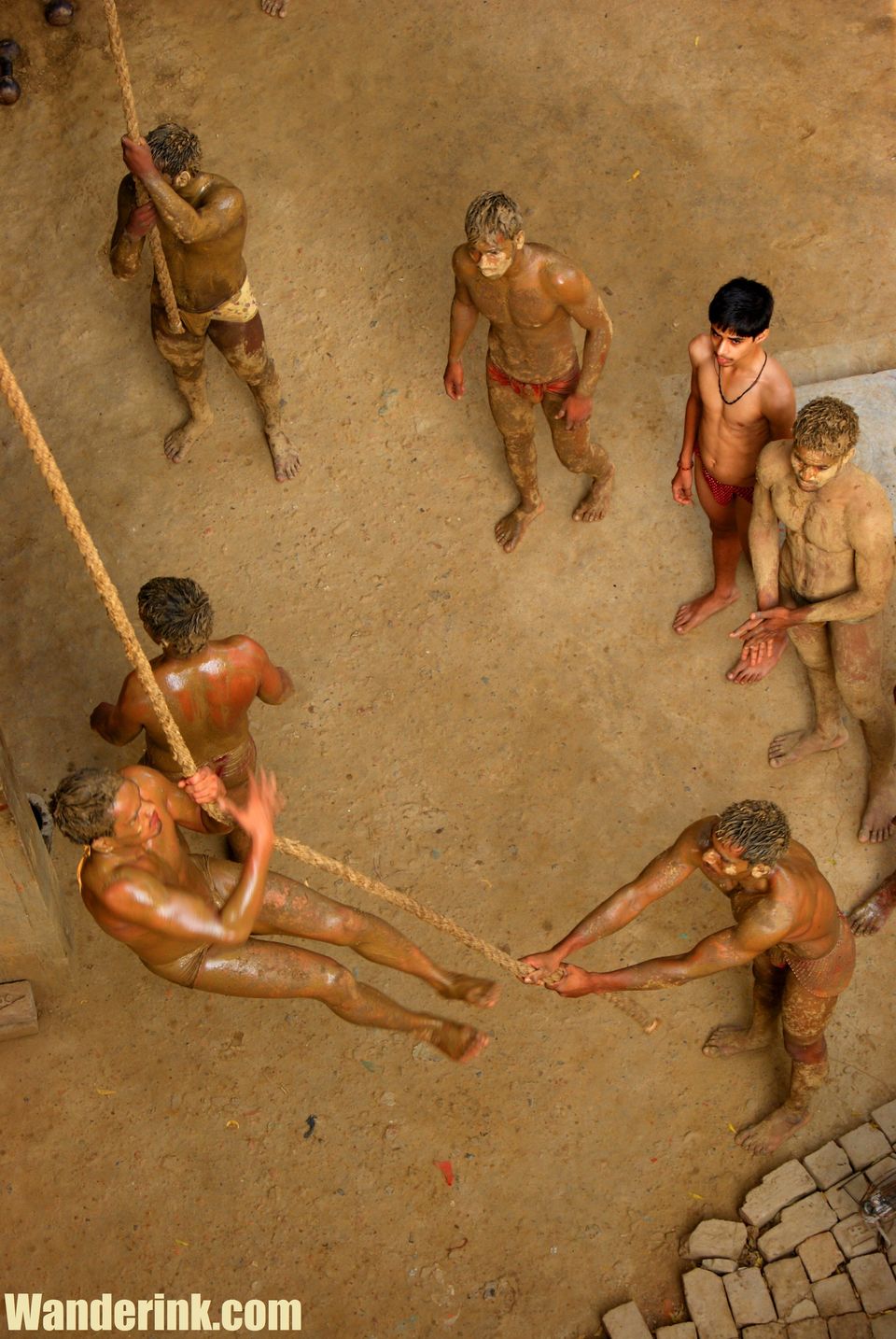 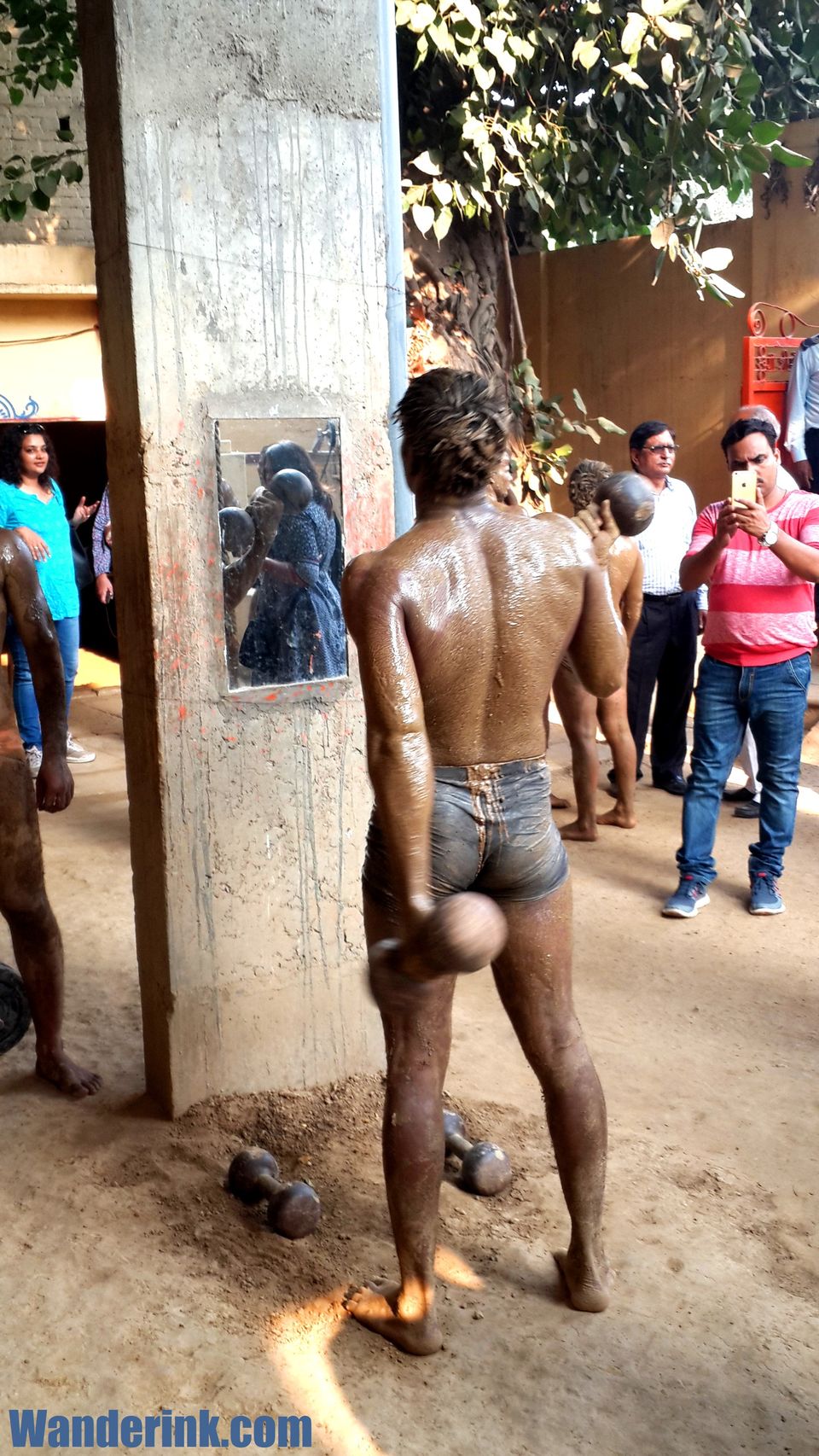 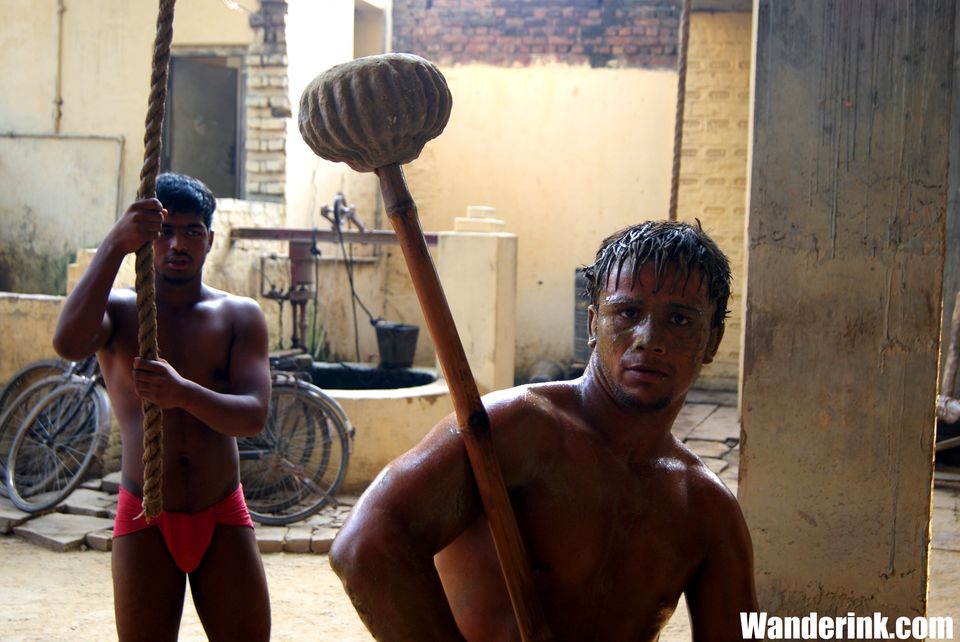 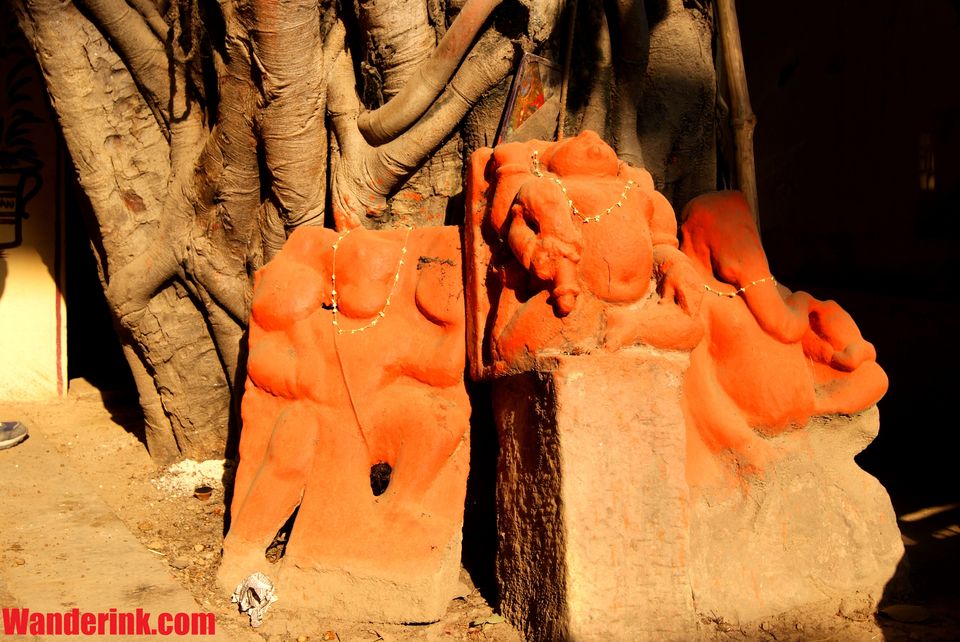 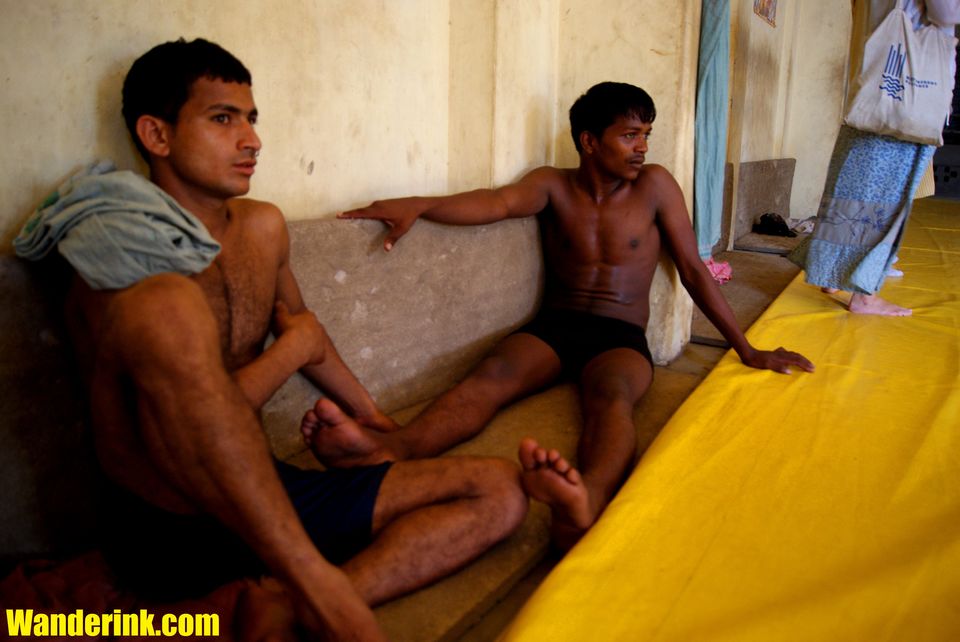