My Journey to the land of Fairy-tales - #Netherlands - #Amsterdam 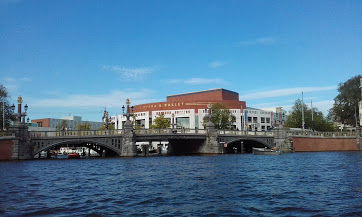 When wodge of gambrel roofs are standing tall, where dinghies or pontoons are yawing front and back, and if hordes of cycles are parked in a line, that means you have entered in Netherlands.

Netherlands, a country at the north-west of Europe, is a paragon of eco- friendliness. As the Dutch are obsessed with their pollution free environment and by-cycles; the roads of the country has dedicated lanes for cycles where every now and then, clinking bells with two thin rolling wheels are passing by in singular or bunches in number.

Amsterdam is an interesting city, with happy vibes everywhere (or may be it's the holiday vibe!); and the whole country being like baby sized, can be accessed very easily from any where. Though I stayed in Amsterdam, the country brightened me up...

Things to see in and around #AmsterdamCanal cruise of Amsterdam: (coming up close with past and present, Future is all about 'Will'!) An hour's ride on the canal of the city with audio guide (even without audio guide, its intensely perfect)

Let's go with the very basic yet essential first!! The canal cruise, starting from Centraal Dam square and ending at the same point.. What matters is what we see in between. A short summary of a city in an hour's time. Amsterdam city is like; assorted tall cuboids buildings with saltbox or gable roofs and plenty of earthy colours brushed on the walls very carefully, the edifices are so well arranged one after the other and served on a big tray where a thin-line flow of bland espresso Canal has divided the city....

The one hour cruise on the canals of Amsterdam, which is flowing carefree on the middle of the city dividing it to left-right and further is good rest to the feet after a day long walk. Keeping the ear phone plugged tightly into the ears, listening to the beautiful lady's recorded voice speaking of the old history of the city and the looking at modern day Amsterdam from glass top boat, the combination is superb and it's a lot about attention!

Amsterdam has so many different kinds of unusual museums! Starting from clothing, bags, plumbing, Jewish history to very famous Van Gogh museum, Anne Frank's house and so many to remember.

As said earlier, the city looks so well organised, buildings gummed to each other in a row, cycles parked in a line, numerous small bridges to cross the canals, lights glinting inside the shops; Amsterdam is full of charm and romance.

The late afternoon or evening cruise is mostly recommended. There are various cruise companies available and during season time, it's better to pre-book the cruise.

The pier is just opposite to the Amsterdam central station, which is again the city centre area and very easy to locate. Headphone provided inside the boat and it's ok if you aren't a history person, the city still will steal your glances..

MORE TO SEE IN AMSTERDAM AS FOLLOWS: A long walk across Amsterdam Centraal/ City centre of Amsterdam Cheese and Clig Making The Hague, Madurodam

*** If you are going during March to May- then visiting Keukenhof garden is a must to see velvety carpet of Tulips in Amsterdam.