Bali - The Land of Gods & the Kuta Beach

Before enjoying the beaches of Bali, I wanted to learn about the culture and the heritage of Bali. My wonderful Taxi Driver Wayan Kanta just knew the right places to take me to. I went to see some kind of Fire Dance/Local Balinese Cultural Dance. This show went on for 1 hour. Although I could not exactly understand what this dance drama was about- it was certainly entertaining to see the colorful dancers and their passion for theater. Balinese People have deep regard in protecting and maintaining their ancient roots and culture. 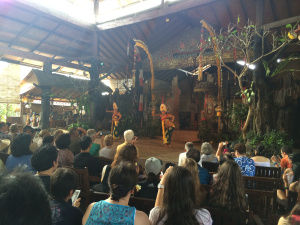 Ubud was next stop for the day. Ubud is famous for its Green reserves and the wonderful terraced rice fields. This is also the place where Eat, Pray and Love was shot (if you remember those rice fields & Julia Roberts).Ubud Sacred Monkey Sanctuary is one of the must visit places in Ubud. This is home to hundreds of Wonderful Balinese Monkeys. The monkeys here definitely very smart and know how to pose for the cameras. 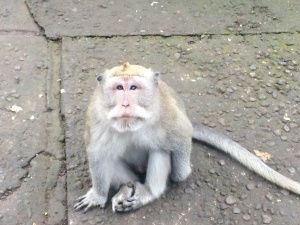 I was now headed up towards Kintamani to catch the sight of the majestic Mt.Batur (Volcano) and the lake Batur. Temperatures dropped up here and it was even more peaceful to catch the sight of the majestic Mt.Batur emerging out of thick clouds (its always mostly cloudy – I was told that I am lucky to catch a full sight of it that day ). I decided to have lunch here. I would probably rate this one of the best lunch place ever. What a Majestic view to have with some hot noodle soup and bintang beer. 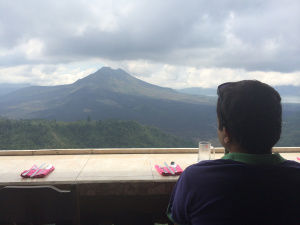 After lunch, it was time to head back for Kuta. Bali is also famous for its artists. Their paintings are some of the best in the world. I decided to stop by one holy spring temple in Ubud on the way back to Kuta.Finally made it back to Kuta to indulge myself to more heavenly massages. After 2 hours of non stop Spa Treatment, walked the streets to check out the nightlife of Kuta. Bali in general is filled with many Australians given the close proximity to Australia. The Traffic here is pretty bad, so its always better to get a two wheeler on rent (by the ways -its dirt cheap to hire one ). Kuta is often compared to PATONG area in Phuket. Having been to Patong also, I felt Kuta is much more classier and neater than Patong even though commercial activity is pretty large. There are large malls in Kuta Area and plenty of Pubs and Restaurants in and around Kuta and Massage Parlors and Spa. Everything here is cheap- but you could easily forget how much money you actually spent !!!!After Lunch, we were in for the second dive which took us deeper into the ocean to explore. Along with us went the GoPro Cameras to capture the wonderful pictures deep inside the sea. Words could not describe the sightings we had and experienced inside.A wonderful Golf Resort was waiting us at the end of the scuba diving trip . Universe does Magic at times, having come to Bali after forgetting my debit card, I could not have imagined that i would end up doing all this. I have to thank all my wonderful friends all the people who offered help and favor from unexpected corners and speed. 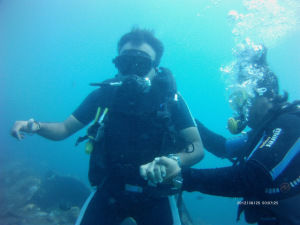 If Gods did reside on Earth, Bali would definitely be the place. More than 90 percent of the population in Bali is of Hindu Religion. For those of who don’t know- Indonesia, the worlds third largest democracy is also the home to world’s largest Muslim population. Every year millions of tourists visit Bali, some even make it their home. Balinese Hospitality is one of the world’s best. After hearing so much about this place, I decided to visit this beautiful place to find out about more about its natural beauty, beaches and the culture. I Traveled to Bali via Kuala Lampur. I had a disastrous start to the trip at Bangalore Airport. In the excitement of travelling to Bali, I forgot my debit card- my onlysource of cash given that Indonesian currency is not available freely. I had not booked any hotels or resort in Bali given the adventurous nature in me. So here was an adventurous start to my trip- travelling without money (yes no money even to pay for visa on arrival !!!) to the great Bali. Somehow I was quite chilled knowing the fact that one of my other friend was going to be arriving in bali from Bangkok from whom I could borrow some money.

As it turns out I had a bigger surprise waiting for me in Denpasar airport. My Flight landed 1.5 hours later than the scheduled arrival time, thereby missing any chance of meeting my friend from whom i could borrow some money. I was already starting to think whether to raise money by selling my Longines watch. I was surprised to find another Indian from Mumbai stuck along with me. His ATM card was not being accepted in the Airport ATM machine (so he was also in the same situation as me in spite of having money ) . Here I was thinking having no money could be the worst situation to be in.!!!! In the final leg of my trip, after hiring a surfing instructor for as less 100,000 IDR per hr decided to give surfing a shot. After falling numerous times, finally managed to balance myself and surf successfully. My Instructor was even more happier given that I learnt it pretty fast. I was Tired and had burnt lot of calories (Serious- surfing consumes lot of energy) . I was happy at the same time knowing that I had done pretty much everything I wanted to do in this trip. After some shopping and more massage, it was time to say goodbye to the land of gods and its wonderful people . Indeed I felt blessed having been able to enjoy so much after having forgotten my debit card. I shall return back sooner rather than later, Bali.

This trip was first published on https://supreethblogs.wordpress.com/.