Bangalore Travel GuideBangalore TripsFalling Our Way To The Horse'S Mouth

Falling our way to the horse's mouth

I recently had the pleasure of trekking one of the most beautiful treks in Karnataka- Kudremukh. Kudremukh literally means horse's mouth, hence I am going to use a lot of horse references here. I was leading a team of around 20 engineers, who had never done a single trek in their lives, on one of the most difficult treks in the state. The trek in itself isn't that difficult. It's the rain that makes it so. But there is one plus side of the rains. It makes an already beautiful trek, exquisite. I met the team in their office, waiting for our ride to arrive. When it finally came and we departed, we were already 2 hours late. It was worrying because trekking in Kudremukh is allowed only from 6am- 5pm, so I had planned to start the trek as early as possible. Anyway, it was a 350 KM journey so after playing some games, we dozed off.

WE WERE LATE. We were extremely late. The tempo traveler we had hired dropped us near Balegal, which is about 6 KM away from our base camp. Although the distance isn't much, the road to base camp more than makes up for it. It took us 1 hour to reach Base camp, driving on a swamp which doesn't deserve to be called a road. We finally reached our Base camp at around 8.30 AM. The Base camp was a home stay, the owner of which cooked edible food. We freshened up, had breakfast, got our lunches packed and started the trek at 10AM and I knew then and there that it was going to be a difficult day. As if to make it certain, it was raining cats and dogs. We got our permissions from the forest reserve camp and we were finally off to mount the horse. The trek can be divided into three parts:

Part 1- Slippery and moderately steep- This part is about 2 KMs long till the first checkpoint, a really old and huge Banyan tree. Till this point, most of my team members had already given up. Not to take anything away from them, it really was quite slippery, partly because of the rain and partly because hardly one or two of them were wearing shoes that could qualify for trekking. As a result, there was a lot of falling down and a lot of screaming in pain. Till this point, they had also crossed 2 water streams, which were flowing at a ferocious velocity because of the extra water feeding into them. But we reached the first checkpoint nonetheless and I cut them some slack and let them rest for a few minutes. After that, it was smooth sailing for a bit. 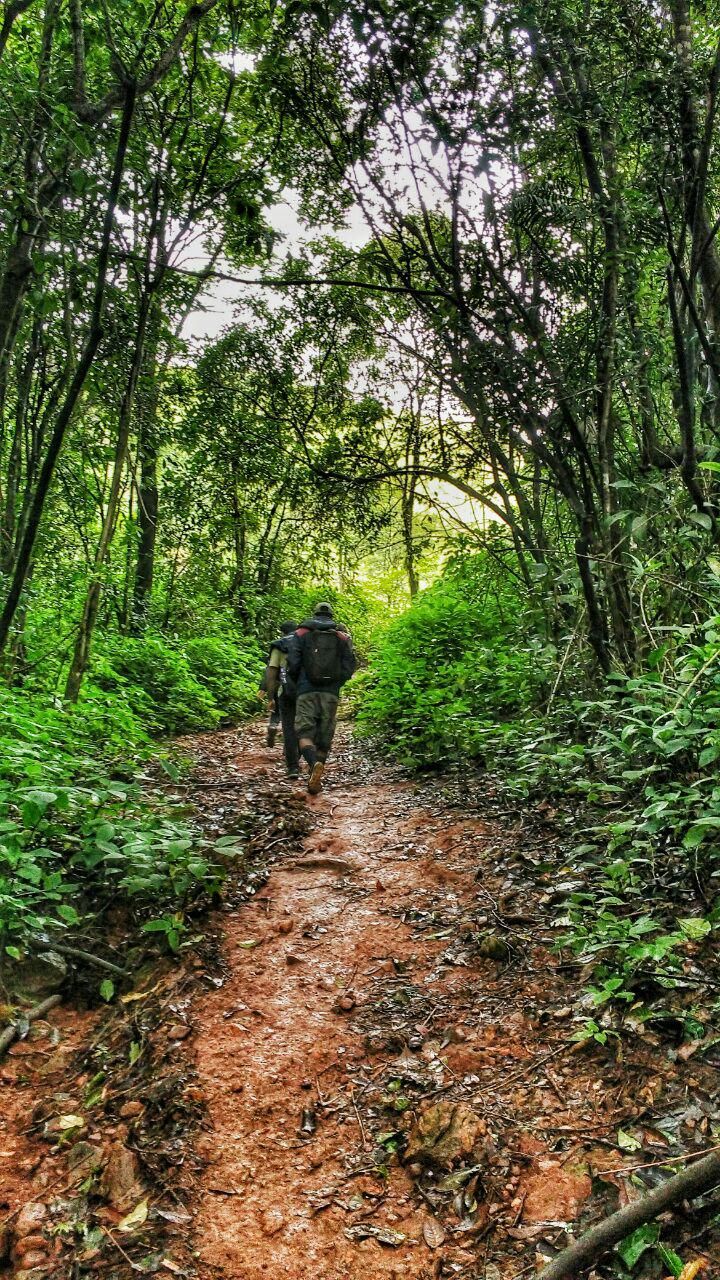 Part 2- A little slippery but almost plain- This is the happy-go-lucky stretch which lasts about 5 KMs. I could sense that it was so refreshing for the team that some of them could have started skipping. I let them have their moments because third part wasn't too far. This stretch has 5 streams to be crossed and till this point there was a not a single dry shoe in the whole team so we didn't care. Lots of leaches were removed, blood gushing out from legs was stopped, a lot of photos were clicked and a lot of distance was covered without any major incident. This stretch also has a stream with water upto your knees and it can sweep you away if you aren't careful. So yeah, be careful.

Part 3- Super slippery and quite steep- This is the hardest part of the trek and is about 4 KMs long. Here, you can see people who left before you, sitting, after having given up on the trek, their lungs and life in general. A few of my team members also tried to quit but after some inspirational words by me (read: Shouting and screaming), we finally reached the top at around 4pm. I knew we were losing sunlight thus we took a short break of about 15 mins, during which we had our lunch and shivered senseless due to the cold. Then started the part of the journey I dreaded most. The descent.

Descent- Why did I dread the decent? Because, on a trail where my team members fell around twice each during the ascent, it would have taken a miracle to reach back to base camp without anyone breaking their hip bone. I crossed my fingers and off we went. The topmost portion was going to be the most difficult part. I hate to be right. During that portion, one guy had already fallen 5 times and was limping, one guy's shoe sole came off and we had to tie his shoe lace around the shoe so that he could atleast walk without getting natural acupuncture. Then this guy, in his attempt to shave a bamboo to tie around his shoe, cut his hands deeply and it took everything in the first aid kit to stop the bleeding. And this was just the first portion. I could cry. All this while, I was urging the team to not throw garbage on the mountain, to not smoke(because their lungs were already about to explode) and witness the beauty around them. It really was exceptionally beautiful. Green mountains, blue sky and burbling clean streams. It was perfect in every sense, except for the leaches. They suck, literally. The rest of the journey was done without any major incident till about 7PM. That is when it got pitch dark. We couldn't even see our own hands. I always carry a torch whenever I am trekking because of the same reason. Including mine, we had 5 torches for a team of 23. So, we shared and we screamed at each other to know that everyone was going in the right direction. We reached the base camp at around 9PM, after which there was a lot of moaning due to pain and first aiding by yours truely. But I could see that they were all happy and a sense of accomplishment in them and that made it all worth it. 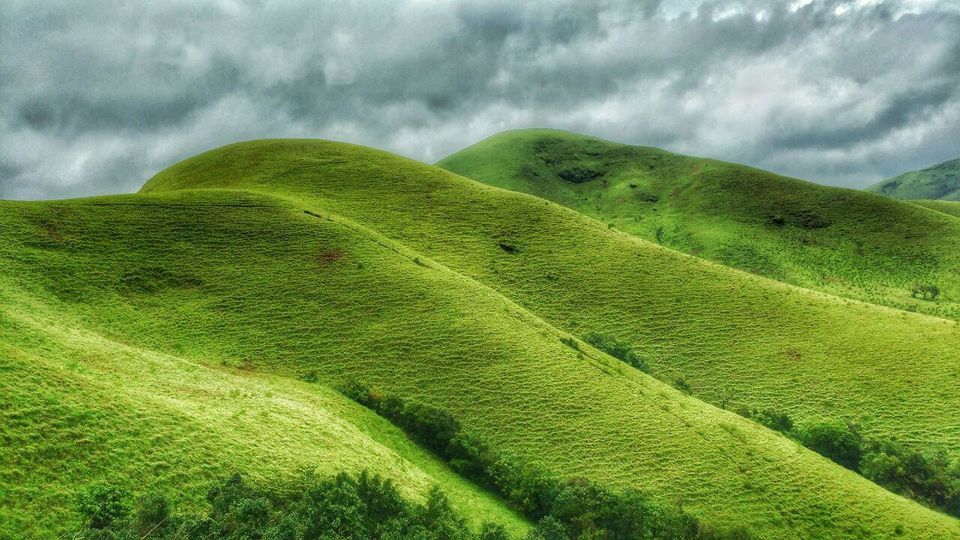 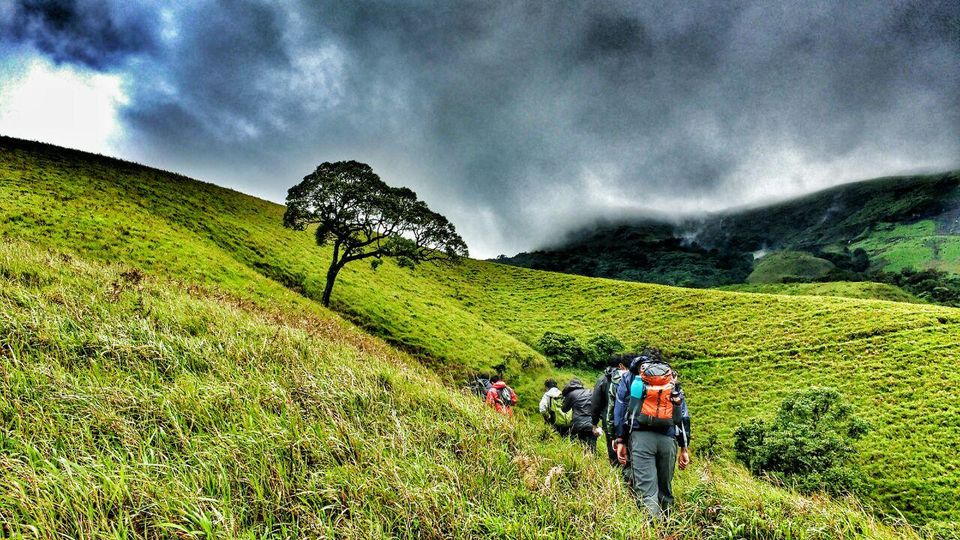 We had our breakfast and left in jeeps for our traveler. There were 3 jeeps to carry us and one of them gave up. The luck I have, I was in that very jeep. Four of us had to get down in the swamp and push the jeep and as expected, we were covered in mud from head to toe in the time it started again. But it started, and we reached the traveler. After a round of tea and cleaning off, we were off to Bengaluru again. It's funny that I don't remember anything about the journey back. It might be because all of us were sleeping like babies the whole way.