I didn’t want to leave the comfort of my beloved Europe. Yet I longed to tick Asia off some list I’ve never even written down. So I accepted an invitation to Indonesia that would reunite me with old friends and continue the journey with a new one and in the dawn of a Barcelona morning, Turtle and I began our long journey.

I accepted the invitation to Indonesia specifically because it’s a part of the globe I am fearful of. I enjoy what people like to call “westernized” countries. I enjoy learning about history and being challenged only to try foods that I can recognize, I get too excited about beautiful architecture and I can relate to the people of Europe in a way that doesn’t push me too far out of my comfort zone. In my search for home, Asia never factors into the equation because I consider first the things that fear me, never stopping to see or listen for the things that might elicit an opposite reaction within Asia.

It is that which scares us that we should sometimes race headlong towards. These are the things that make us grow into better human beings if we allow them to.

After finally landing in Jakarta, we spent an awkward afternoon and night in a hotel; insulated from the country we’d just landed in and present in a sort of holding pattern, on land. The goal was eradicating jetlag yet I fell only deeper into a pit of exhaustion and confusion. I could look out of my sixth-story window and see the buildings of the city but they did not look like I imagined Indonesian buildings to look like. The rooflines in my view looked so Dutch and European, yet all were new construction, some even unfinished. This reminded me of the signs of recession I’ve already seen in half a dozen countries all across the globe in 2012. I ate my first Indonesian meal in the hotel restaurant, chicken satay. I had dinner in the same space, consisting of rice and vegetables; my first tastes of the country were lackluster at best, living up to the expectation of hotel cuisine. I never imagined such a thing would be universal when I found myself as far away from home as I could get. I hoped this, leaving room for improvement, would indeed — improve. 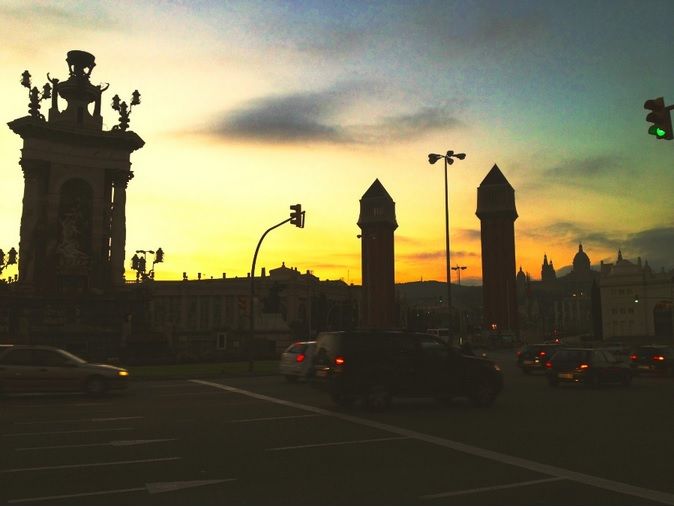 When I first found out that I would be traveling by boat up a river in the jungle of Borneo (Kalimantan), to explore a National Park and see orang utans in their natural habitat … I pictured something like the beautiful moments in The African Queen. Taking our meals on the boat as we drifted down a river and sleeping on that same boat, sounded romantic. I even perused the guest list for our trip wondering who could be the Bogart to my Hepburn.What I found to put in the place of all my fears, was joy in the closeness to nature and such beautiful animals — who seemed to exhibit some of the same characteristics so attractive in human beings. As I watched mother orang utans in the jungle, their babies clinging to them like second skin, I could see love and care in every movement of their bodies from the way they walked, to the way they swung through trees, always sheltering their young as they flew through the air. It is a sappy observation and a difficult one to write, being a sarcastic woman who thrives on a little bit of detachment as a norm. It’s no less true. If the garden of eden was real, there’s some form of it still alive in Borneo, threatened more every day because of palm oil concessions and a changing Indonesian economy. I couldn’t help but feel a heart string tugging deep in the jungle, so far outside the former boundaries of my comfort zone. It’s what distracted me from the things I might otherwise have not enjoyed and helped me to see the simple joy in our Borneo experience. It’s what made every moment of roughing it seem far more like having found the winning lottery ticket. 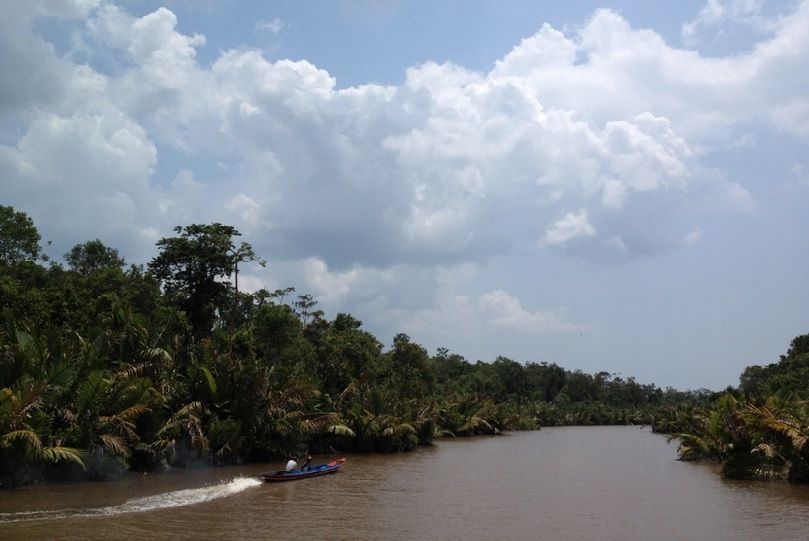 Borobudur was a moment in which I was able to be still and not just learn but actually apply, in the moment, the lesson of peace and stillness; which brought about joy. It must be no coincidence that the t-shirt I put on to wear the morning we rose before the sun, was from the #FindYours campaign I did with Expedia. It says, “Find Your Joy.” And in the moment that this photo was taken, that — and more — is what I had found. et, at Borobudur, sitting in wait for the sunrise to blind me and thrill me, having nothing else to do but wait, amongst a place of physical beauty (a characteristic that always excites me) — peace, stillness and joy are exactly what filled all the rooms I had for rent. 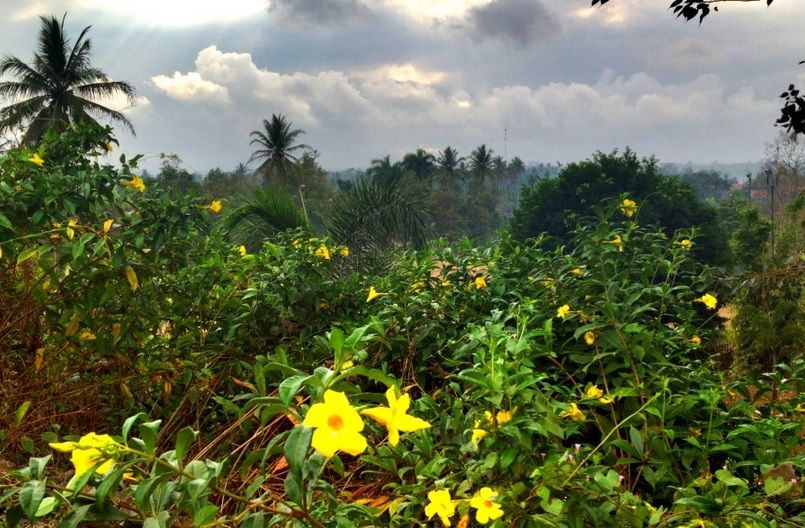 Borobudur Temple, located near Magelang in Central Java, is purported to be the largest Buddhist temple in the world. It is both a shrine and a place of pilgrimage. It didn’t feel that large to me. However, it is impressive and because of its location within a very verdant valley it draws both those seeking the beautiful in nature and the beautiful in man’s creation. The primary source of its physical draw is the intricacy and sheer magnitude of its 2,672 relief panels. A pilgrim could easily believe that the temple’s layers are a sort of stairway towards heaven. There is a constant feeling of reaching ever higher. At the top one finds a main dome and 72 Buddha statues seated inside perforated stupas which are in addition to the 504 Buddhas that already dot the lower layers of the temple. Though the temple was constructed in the 9th century, it may have been abandoned in the 14th after a decline in Buddhist and Hindu tradition once Islam began to take hold in Java. British ruler of Java in 1814, Sir Thomas Stamford Raffles, was alerted to its existence which then led to it being officially preserved, and provided for restorations to begin. It was in the early 1980′s that Borobudur was then listed as a UNESCO World Heritage Site, a status it still retains today. It is Indonesia’s most visited tourist attraction. To visit for yourself, check out Indonesia’s resources page here. 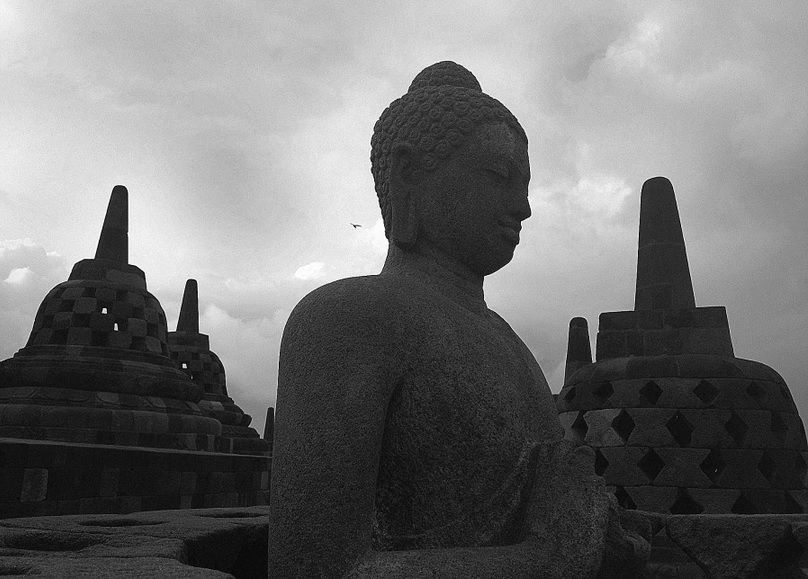 Here’s the tourist trail in Bromo: You wake up early, ride by jeep part way up Panajakan, hike the rest of the way to the summit where there are vendors selling coffee, hats, gloves, etc. Wait for the fireworks to start (on a good day it’s stunning, on a bad day I’ve been told it’s still worth the climb). After the sun is fully over the horizon, climb back down, reunite with your Jeep driver who will take you back down Panajakan and across the barren plain that lies in front of Bromo where you can walk or hire a horse to take you past the Hindu temple and to the feet of the nearly-vertical 250 stairs which, upon climbing, will allow you to look down into the depths of the active Bromo crater. It smokes daily and sometimes is shut down completely for fear of another eruption. Sulfur will choke you and gusts of ash dust will try to blind you but when you’re standing at the top there really is a bizarre happiness that settles into your bones, joy at having made it to the top and sheer awe at the majesty of nature you have witnessed. It’s a strange land, constantly on fire under the surface, and harsh in a way that only a place in constant flux could be. Truly a place for pilgrims, whether religious, nature-loving or simply adventurous. 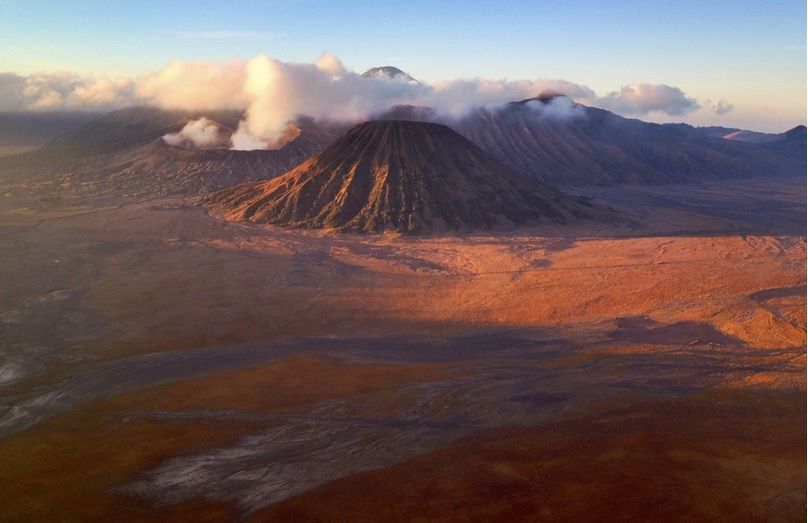 In formal terms, it’s called, “Kraton Ngayogyakarta Hadiningrat.” Less formally, the Keraton. It’s the royal palace, and home, of the ruling sultan in the province of Yogyakarta, Indonesia. He is technically a governor but is able to retain the title of sultan. The Keraton is open to the public in the first portion of the day yet it is still used for meetings, official functions and as a home where the sultan and his family live. About 100 guards are on duty during visiting hours though at any time around one thousand are actively serving the sultan. In one direction, it faces the Indian Ocean which highlights a belief in the sea spirit. The other direction faces Mount Merapi. The layout has many meanings and now different portions and decorative elements pay homage to all of the elements of Indonesian religious culture, a fusion of Buddhist, Islamic and Hindi beliefs. There is also a wonderful exhibit of royal clothing and batik fabrics that helps the visitor to understand what different patterns mean and why they are such an important part of Javanese culture. 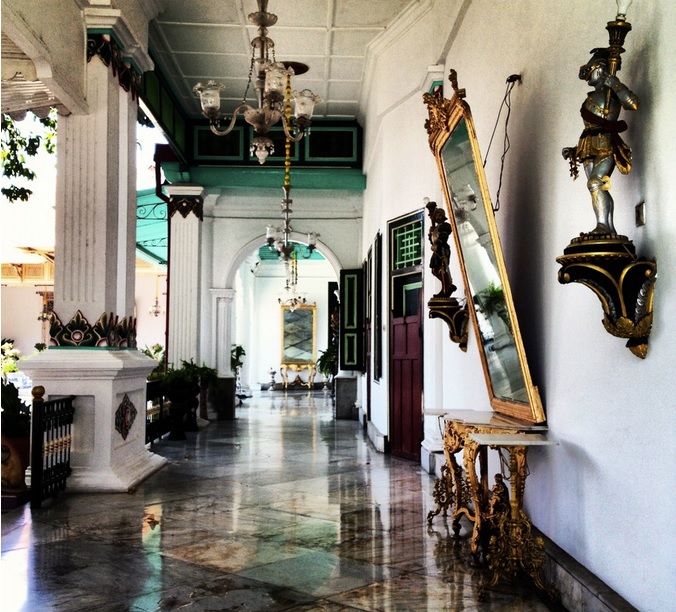 In contrast to the formality of the Keraton and yet just a few blocks away, is the Water Palace – as it has now come to be known – the former holiday retreat of the sultan. The Taman Sari Water Palace was the place where women were brought to entertain the sultan and the site in which he found a new wives. From a window high up, overlooking the pools, the sultan chose women who appealed to him and then they were summoned to his presence for…well, I’m sure I don’t need to fill in any details here… 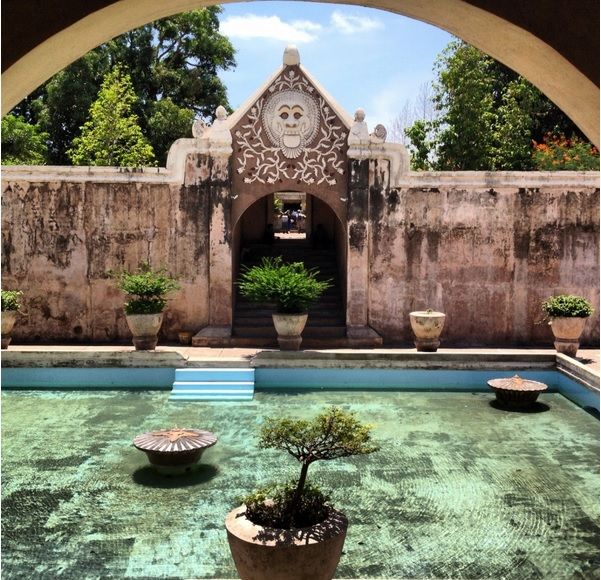 It’s a harsh place. On a hot day in a spot without shade the sun can make you stroke out before you even realize you’re tired. Komodo Dragons aren’t caged or penned, instead roaming wild, the entire island their kingdom. One comes to the islands to learn about the circle of life and yet at all times, death lingers in your mind because there is always the possibility of another attack. Yes, rangers accompany you – armed with little more than sticks. Yes, they know how to defend against an attack – but here, nature does not always cooperate and dragons aren’t really afraid of sticks. And I learned to relax for long enough to admire an animal which truly remains at the top of a food chain in an environment where their might is perfectly on display, as opposed to being handicapped in a zoo. I also noticed the environment itself. There is much that is alive. And even more life teeming under the surface of the ocean that surrounds the islands in the Komodo chain. 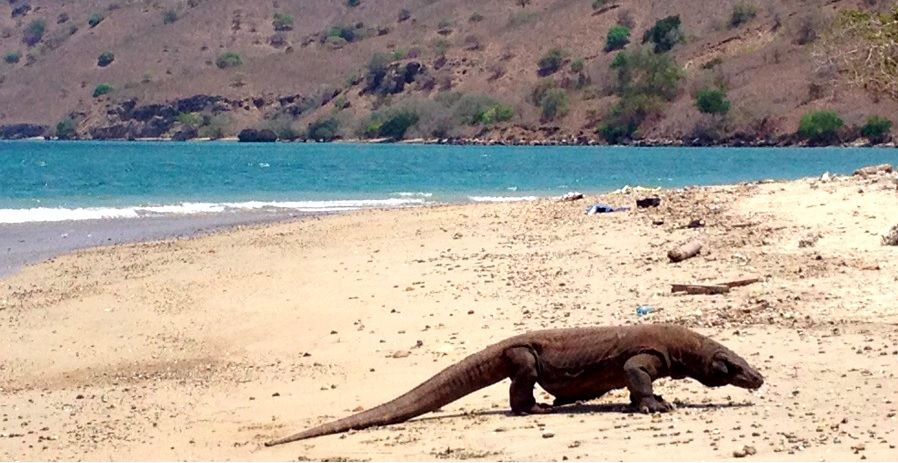 My favorite place was Pink Beach. It’s named for the sand, literally pink, caused by red coral washing up and being ground by the constant pressure of the tide and the waves. Snorkeling here was the best I have ever experienced and yet it isn’t even the best in Indonesia. From a cliff above the beach I surveyed our paradise and thought again about life, how glad I was to be alive; how alive I felt being so enveloped in nature, without cares and worries to distract me from the beauty. For as long as we could we bobbed and swam and floated in the beautiful water, appreciating the bounty of life and the gift of another day. None of us know how long we are guaranteed and the blessing of being able to spend a few days living in the Komodo Islands may be one of the greatest I have ever had, one of those experiences after which one tends to say, mostly joking, “I can die happy.” 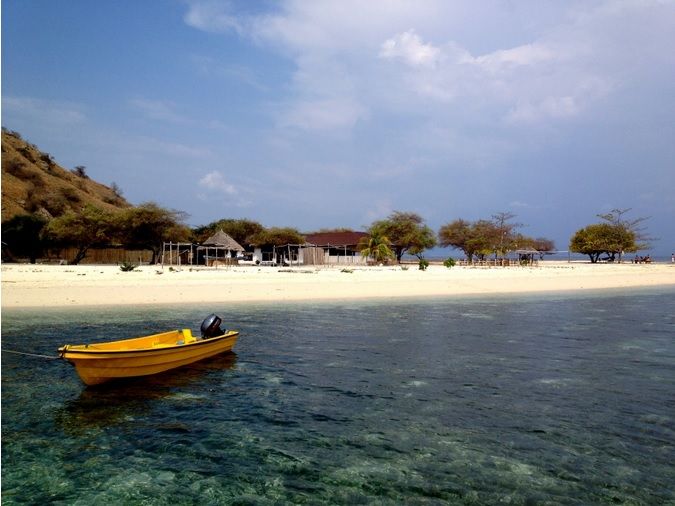