Bhutan: On The Pursuit Of Happiness 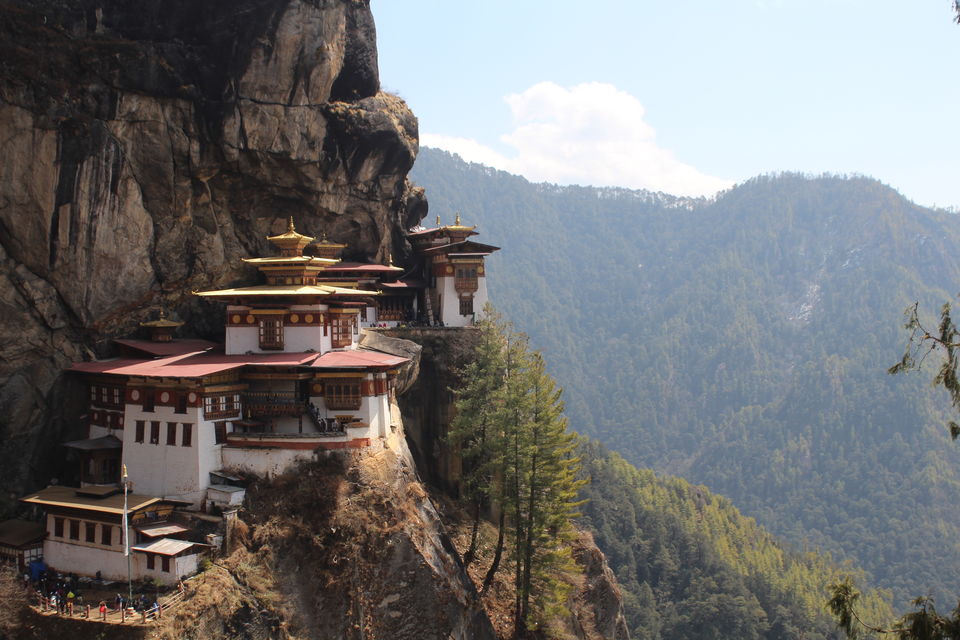 The sight of the majestic Himalayan, glacial rivers and streams flowing, the air of serenity with the Tibetan monasteries in the vicinity always excite me to the core. Hence, Bhutan has always been in my bucket list since ages now.

There are various routes and means to reach Bhutan, but to have a road trip from Siliguri is probably the best option , because the airfare is quite high for a direct flight to Paro( the town where the airport is located in Bhutan). Also, the road trip to Thimphu is very scenic indeed and very safe compared to other routes from Assam. There are two phases to the roadtrip from Siliguri to Thimphu. The road from Siliguri to the Bhutan Gate is quite plain with endless tea plantations on either side of the road. It' s around a 4 hour journey to the gate. Jaigaon is the town on the Indian side of the border and Phuentsholing is on the Bhutanese side. However, the stark contrast between the two towns is there for everyone to see. Jaigaon is quite filthy and congested. As one crosses the gate to Phuentsholing, you are into a completely different world. It is clean, disciplined and has quite a few cafes to feast on. One must explore Phuentsholing for at least a day and also do some cafe and pub hopping. Zangto Peri Lakhang, which is quite an eye catchy monastery, is a must visit place too.

I also found a new love of my life in Bhutan and it gave us company throughout our journey in Bhutan. Yes, I can die for these local Bhutanese liquors, ciders and beers. The Bhutanese cuisine is quite simple. The staple food is basically rice and datchi( basically a gravy of cheese and chillis) with either potatoes, mushrooms, veggies or meat in it. And off course, momos here melt in your mouth and melt your heart. It is a 100% organic country, hence it is almost unlikely that the food here will hamper your health.

The journey from Phuentsholing to Thimphu is hilly with meandering roads across the valley and many spectacular views greeting us on the way in the Chukha valley. What is most noticeable and appreciable is that most houses, cafes, hotels have preserved its traditional Bhutanese architecture and hence the hamlets in this Himalayan dragon country give a very picturesque view of themselves.

Bhutan is divided into districts and each district has a Dzong,which is a distinctive type of fortress found in Bhutan and Tibet. Each dzong has an administrative and a spiritual section with temples. The Druk Gyalpo( The Dragon king), Jigme Khesar Namgyel Wangchuck, is the administrative authority in the country .

The Capital town of Thimphu is very pretty with wide and pretty streets, and dotted with some pretty architecture and cool cafes. Tashicho Dzong, Chorten memorial(In the memory of the third king of Bhutan), Buddha Dordema are some of the pretty sights to visit in the town. One can always soak into the traditional Bhutanese hospitality at places like Folk Heritage museum or Simply Bhutan.

These towns in Western Bhutan are almost around 2 to 3 hours away from one another. Punakha is like a jewel in Western Bhutan with some gifted natural beauty. Pho Chu and Mo chu rivers, the Punakha dzong constructed on their sangam in the 7th Century, the Tibetan suspension bridges built for crossing the rivers, the endless paddy fields intercepted by orange farms and Tibetan monasteries give Punakha its heavenely looks. One of the hidden gems of Punakha is Khamsum Yulley Namgyal Chorten, which requires a short hike from a foot bridge with some breathtaking views on the way. The architectural style is very similar to the Pagodas in Myanmar. There are quite a few places to explore on the outskirts of the main town of Punakha to explore like Chimi Lakhang and Wolakha.

We stayed in a farmhouse here very much on the outskirts of the town, which was absolutely serene to say the least. The farmhouse was speck clean, food was mind numbing, the local wines were like magic potions and the stone bath we had there was rejuvenating.

While traveling from Punakha to Thimphu, one comes across Dochula pass, where 108 Druk Wangyal chortens or stupas have been built by the eldest queen mother of Bhutan.One can get an amazing panaromic view of the majestic Himalyas which is quite astounding. The feeling you get when you are eating the best mushroom puffs I have ever had and gulping the hot chocolate from the nearby Druk Wangyal cafe is something I cannot describe in words.

Paro is like the twin town of Thimphu, around an hour and half away from Thimphu. On the way from Thimphu to Paro, one can see a 15th century iron bridge, Tachogang Lakhang bridge across the Paro chu river connecting it to the Tachogang Lakhang Dzong. Paro has the most iconic place of Bhutan: the Paro Taktsang. It is a 3-4 hours trek, but the view of the majestic Taktsang constructed right on the edge of the cliff takes your breath away. There is also the National Museum of Bhutan, Ringpung Dzong, Kichu Lakhang( among the oldest Tibetan monastery in the region), which attract your attention in Paro.

The Chelela pass connecting the Paro and Haa valley on the Bondey Haa highway is the highest motorable pass in Bhutan at an altitude of more than 13,000 ft and you can get a view of the sacred Jomolhari peak( Also known as the bride of Kangchenjunga). The prayer wheels, the dense coniferous forests, yaks grazing around give you the visual pleasure of the highest order.

The Indian Army maintains a military base in Haa, to maintain security from China. In fact, the old Haa Dzong is now maintained by the Indian army. There are two important temples in Haa: The White temple and The Black temple ( Lkhang Karpo and Lkhang Narpo). They were built around the same time as the Kichu Lakhang in Paro in the 7th Century A.D at the sacred site of the three brother hills(Miri Punsum). These temples are famous for its local deities of Haa valley and the mythological stories are quite fascinating.

Bhutan has unadulterated, gentle and the purest form of people you would ever see. These kinds of places tranquilize your heart and fill it with joy and melt your heart. You want to go to these places again and again and again.

(P.S: The blog mainly only covers the Western parts of Bhutan.)