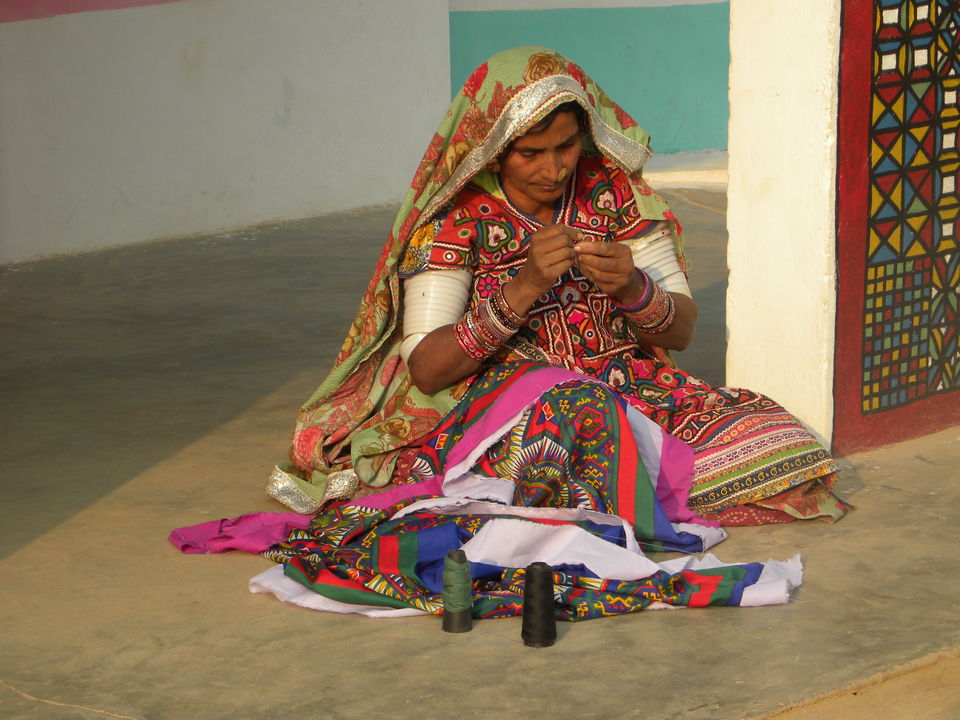 The pop colours they wear stand out amidst the vast expanse of the white sand desert. The bright threads woven with nimble fingers and years of experience present themselves in the form of masterpieces that are worthy of making it to an heirloom collection someday. Even though it is usually the sunsets and moonlit nights at the Rann that attract travellers from around the world to the arid desert of Kutch, we found that it's the story of its gifted artisans that we really wanted to tell. The one that piqued our interest most was the unique art of Rogan and the only family in the world that practices it. 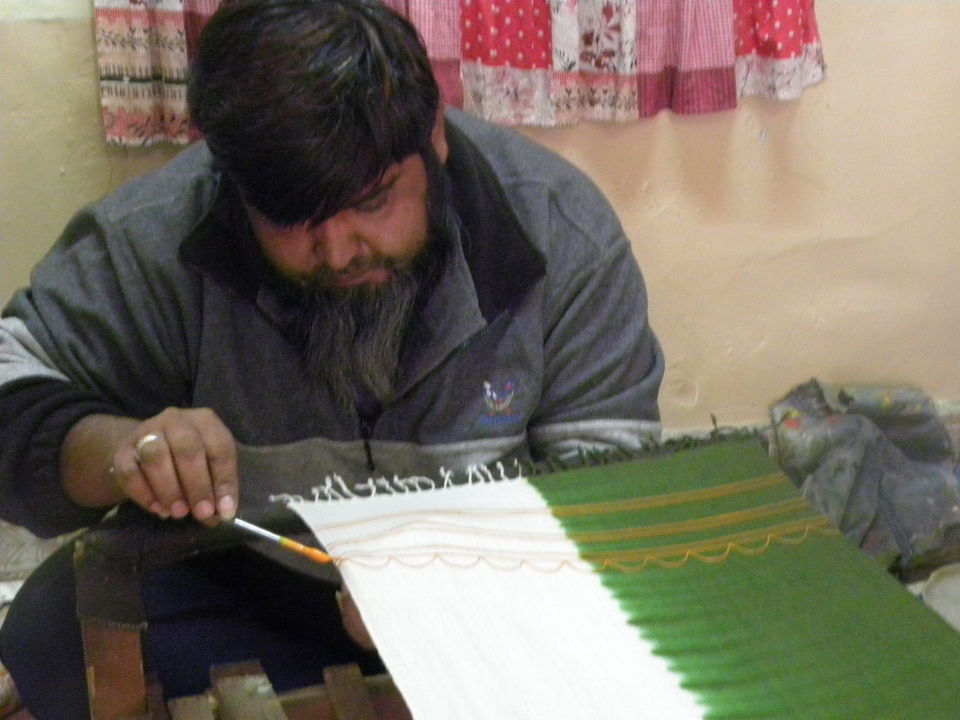 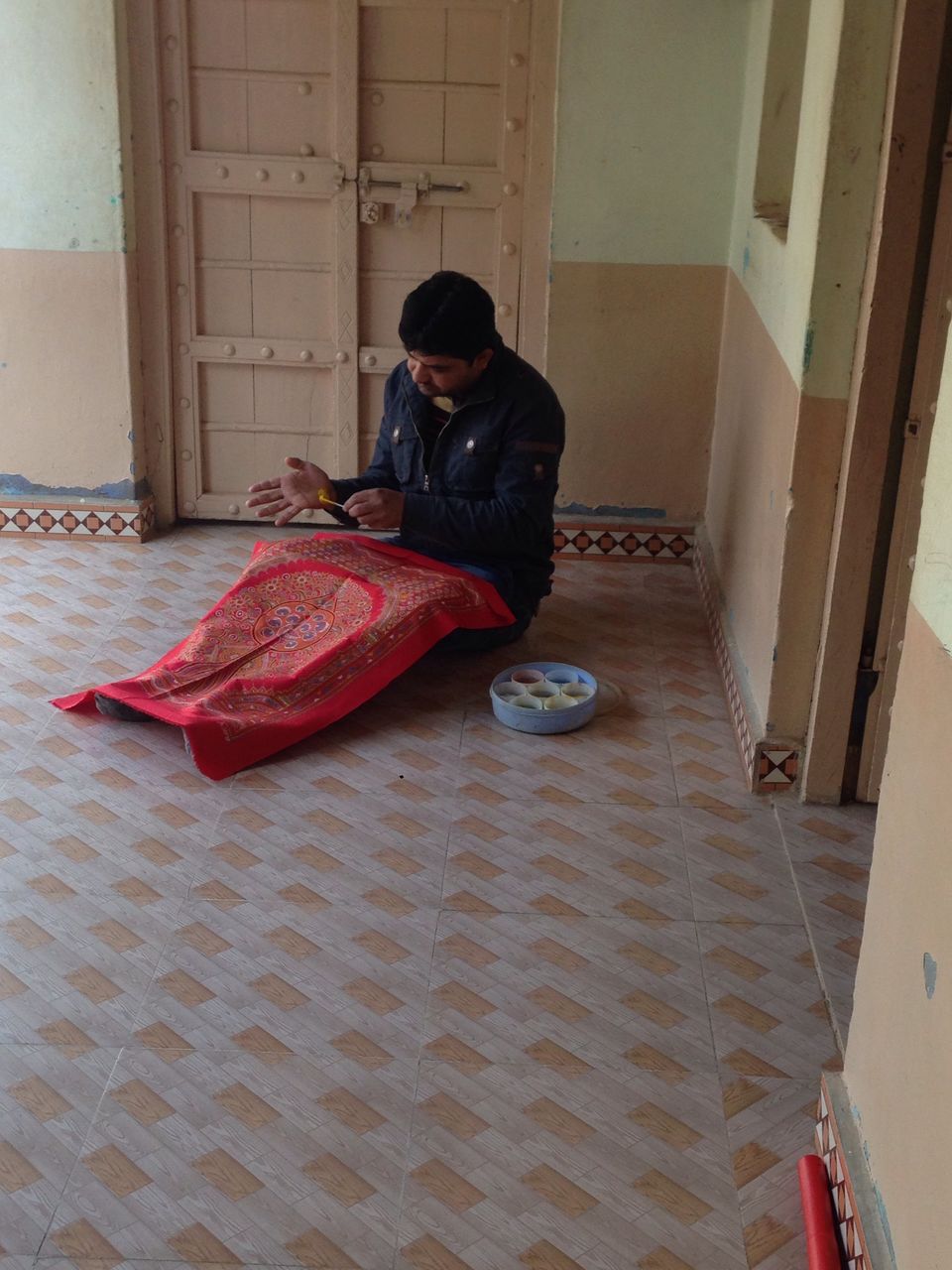 The Tree Of Life is one of the most popular designs depicted in Rogan art. 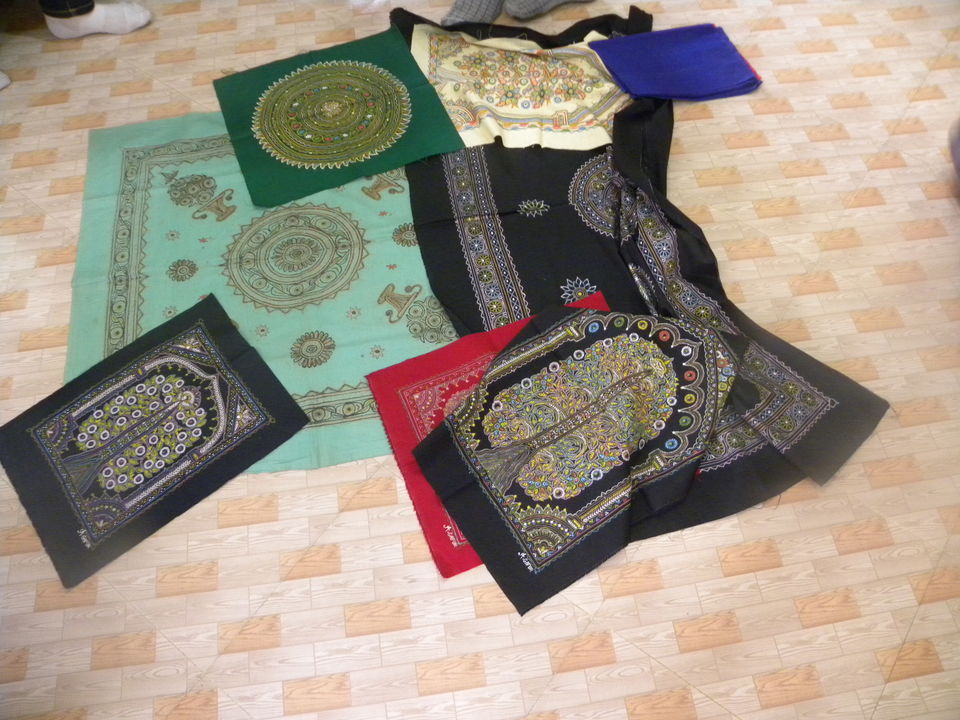 The first time most of us heard of Nirona, was when PM Narendra Modi gifted US President Barack Obama an exquisite piece of Rogan. A quick online search revealed that Rogan is a popular art form traditionally used as a part of wedding ceremonies. It is created using special paint, made using oil from the seeds of the castor plant. You’ll see castor growing abundantly on your drive from Bhuj to Nirona. As we navigated our way through the narrow lanes of the village, we were told that while Rogan art was practised by various families in Nirona and some nearby villages, today a lone family that goes by the name of the Gafoorbhai Khatri household, guards the secret to this art form and keeps it alive. Almost every member of this close-knit family has won a national award. When a junior Khatri laid out some of the meticulously-crafted pieces, we couldn’t help marvel at how fine the strokes were.

The process of dishing out a Rogan piece is far from simple. Rogan means 'oil' in Persian. The base of the paint is prepared by heating castor oil and bringing it to boiling point over three days and then cooling it down. Once it thickens, the colour is mixed with this base. The mixture is then stored in earthen pots with water, which stops the mixture from drying up. A flat, thin iron rod serves as the brush. The sticky paint is twirled around the rod that is flat on both ends. Intricate motifs are created without the rod touching the cloth. The small pieces sell for about ₹4,000 while the price for large wall-sized ones could go up to ₹85,000 as well. 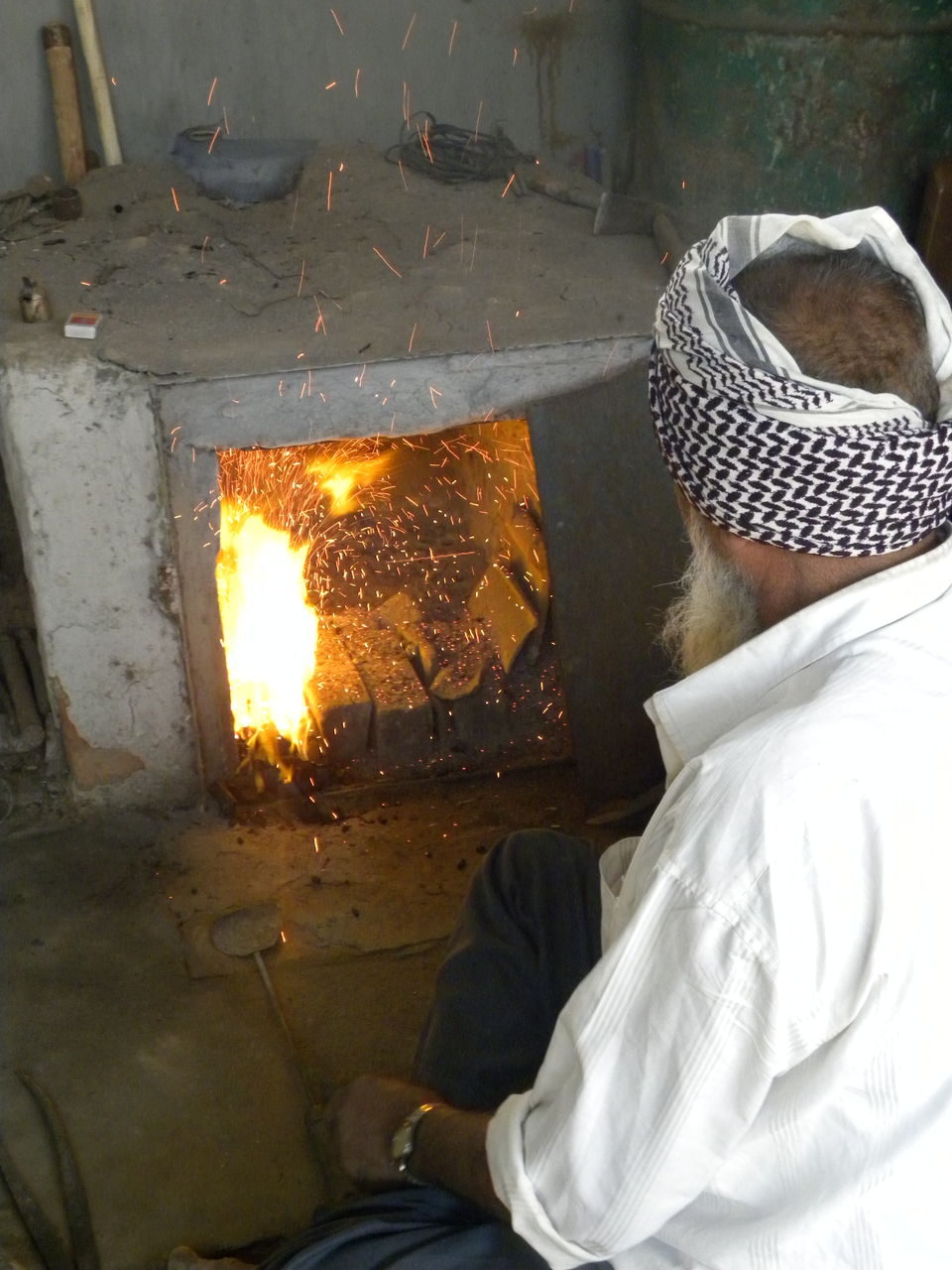 Salim Bhai has never been to school. He learnt the art of making metal bells from his father. 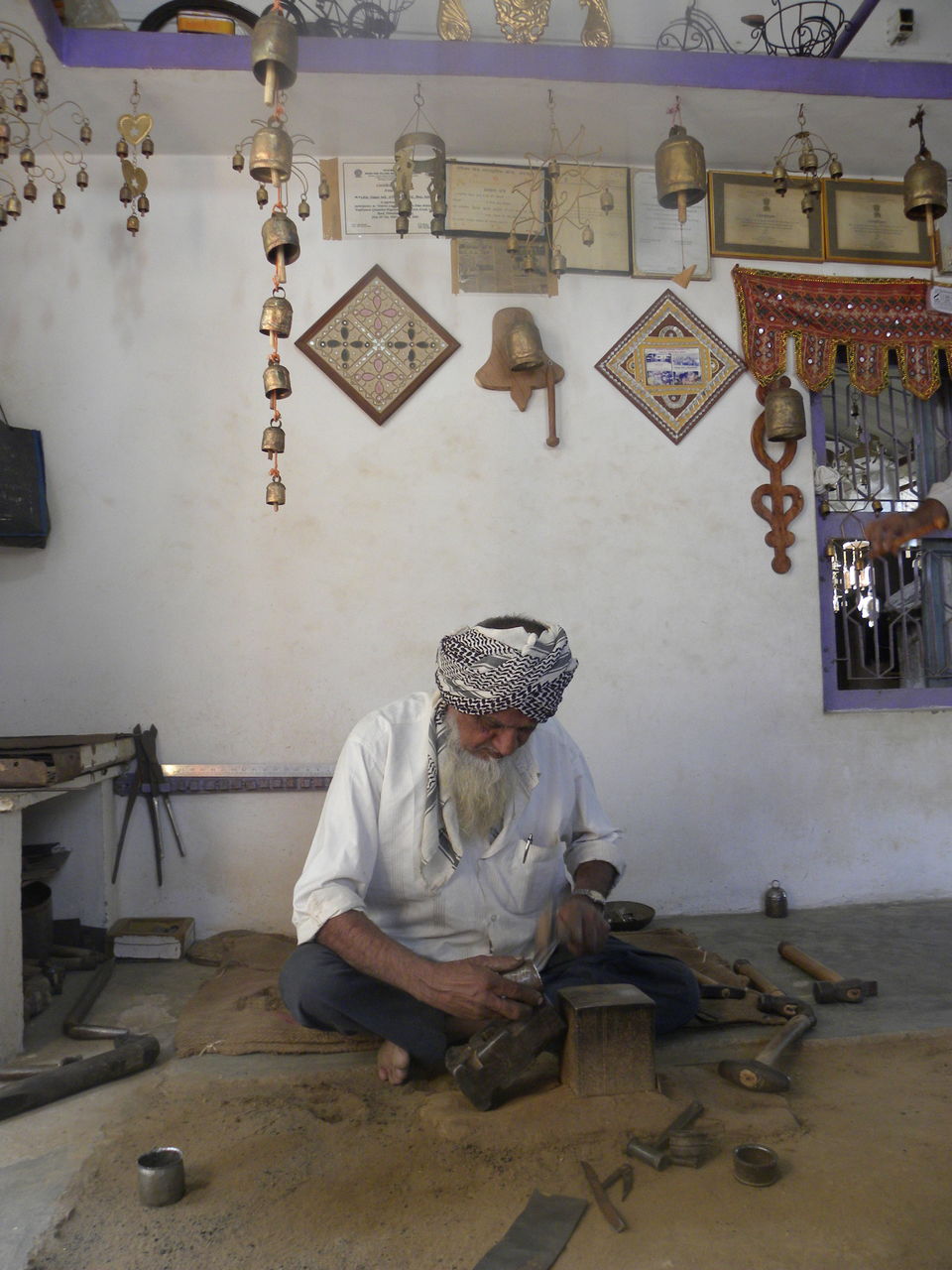 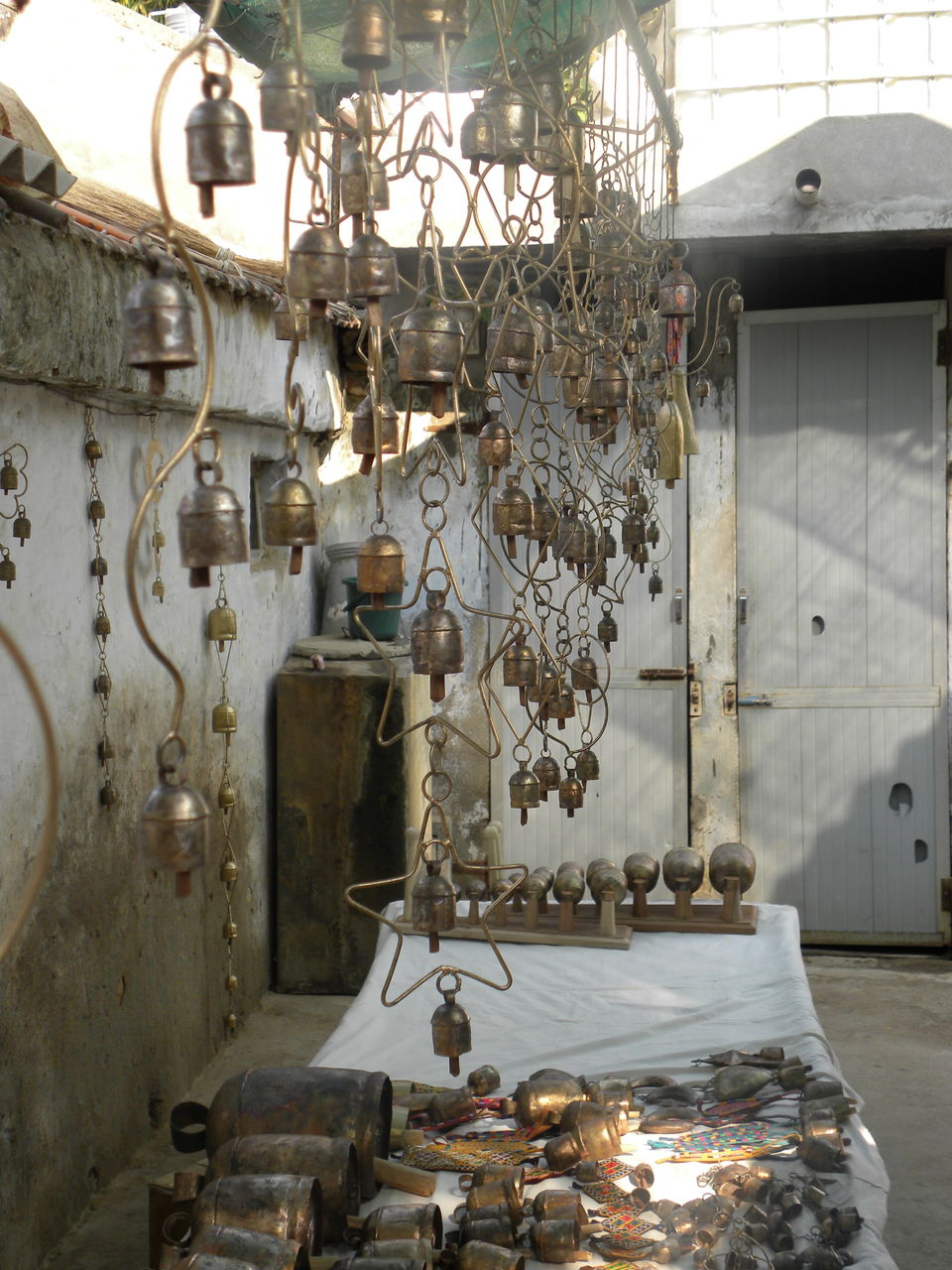 A five-minute walk from the Khatri house led us to the homes of the bell makers or the ghantadi. The art of beating copper into bells (remember the ones that make for popular souvenirs from Switzerland) has been mastered and passed on through generations. Each bell has a distinct sound that is created by beating the material in a particular way. Cattle herders place a request for particular kinds of sounds to be able to identify their herd, once the bell is tied around their neck. Beaten sheets of scrap metal are joined together using only a locking system. No welding is involved to create this. Pick up a small-sized bell for ₹100 or choose the larger ones with metal belts for ₹300.

Getting there: Nirona Village is 40km or 50 minutes away from Bhuj 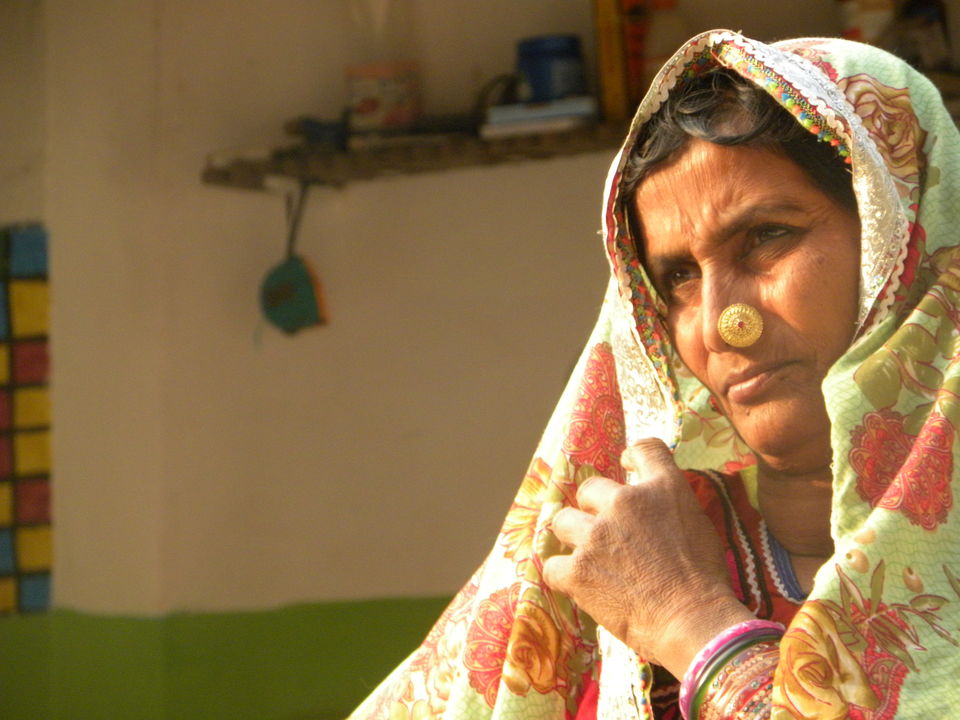 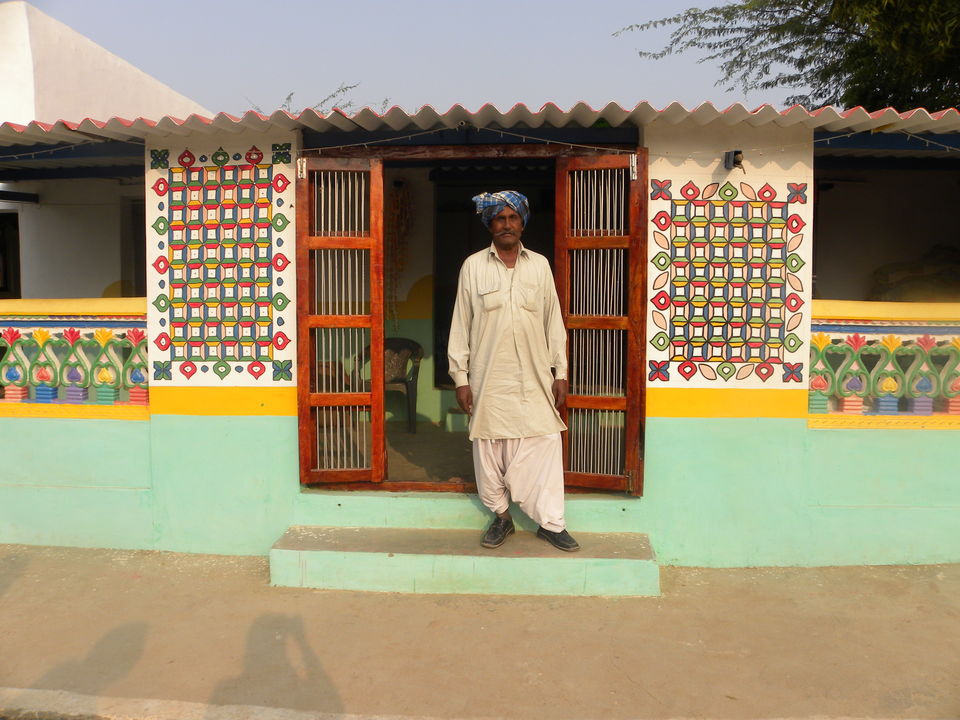 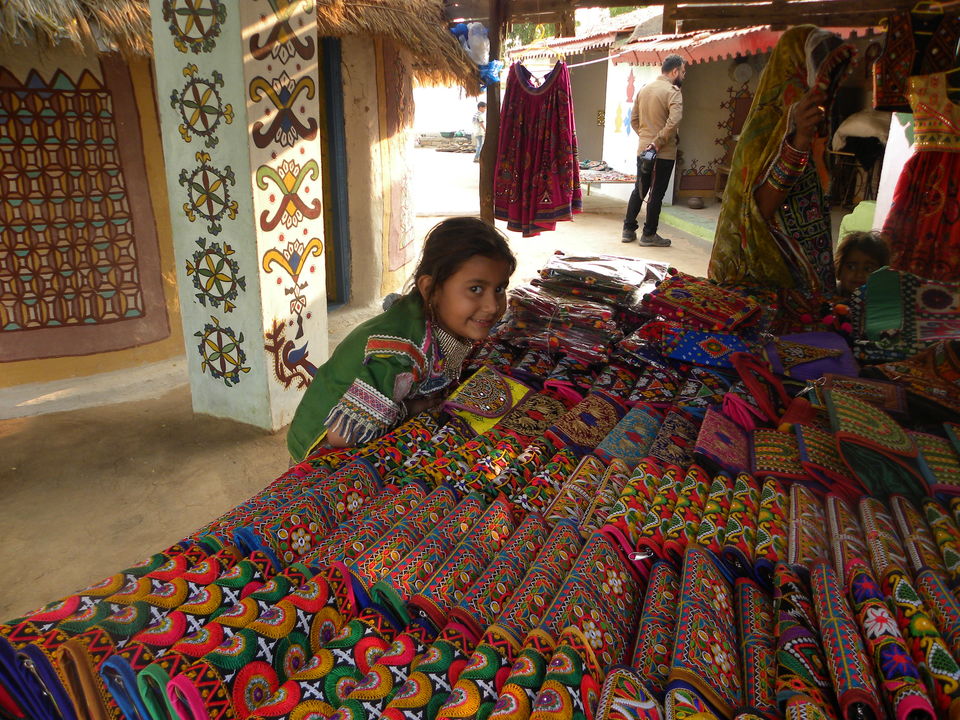 The first thing that strikes you when you walk into Gandhi Nu Gam, apart from the artwork that adorns the wall, is the exquisite jewellery and traditional Kanjari blouses that the womenfolk wear. We were greeted by little girls dressed in a traditionally embroidered ghagra choli, running after a lone goat and sweeping the little thing off the ground to cuddle it in their arms, once they caught up. On sale are beaded necklaces, armbands, embroidered purses and wallets for as little as ₹100. The embroidery is done in bright colours and can also be found on bed covers, cushion covers, dupattas and dress materials. Don’t miss the colourful hair ties that the little girls will easily convince you to buy. The accessories are made by the women while the men busy themselves with creating carved wooden furniture. A patriarch of the Meghwal community twirls his white moustache and tells us how his ancestors were originally from Jodhpur, Rajasthan but the community made Kutch their home decades ago. The traditional bhungas (mud huts) are decorated with bright painted murals on the outside and mirrors on the inner walls. The village had been completely recreated after the earthquake caused havoc in the state.

Getting there: Gandhi Nu Gaam is 59km or 1 hour 30 minutes away from Bhuj. 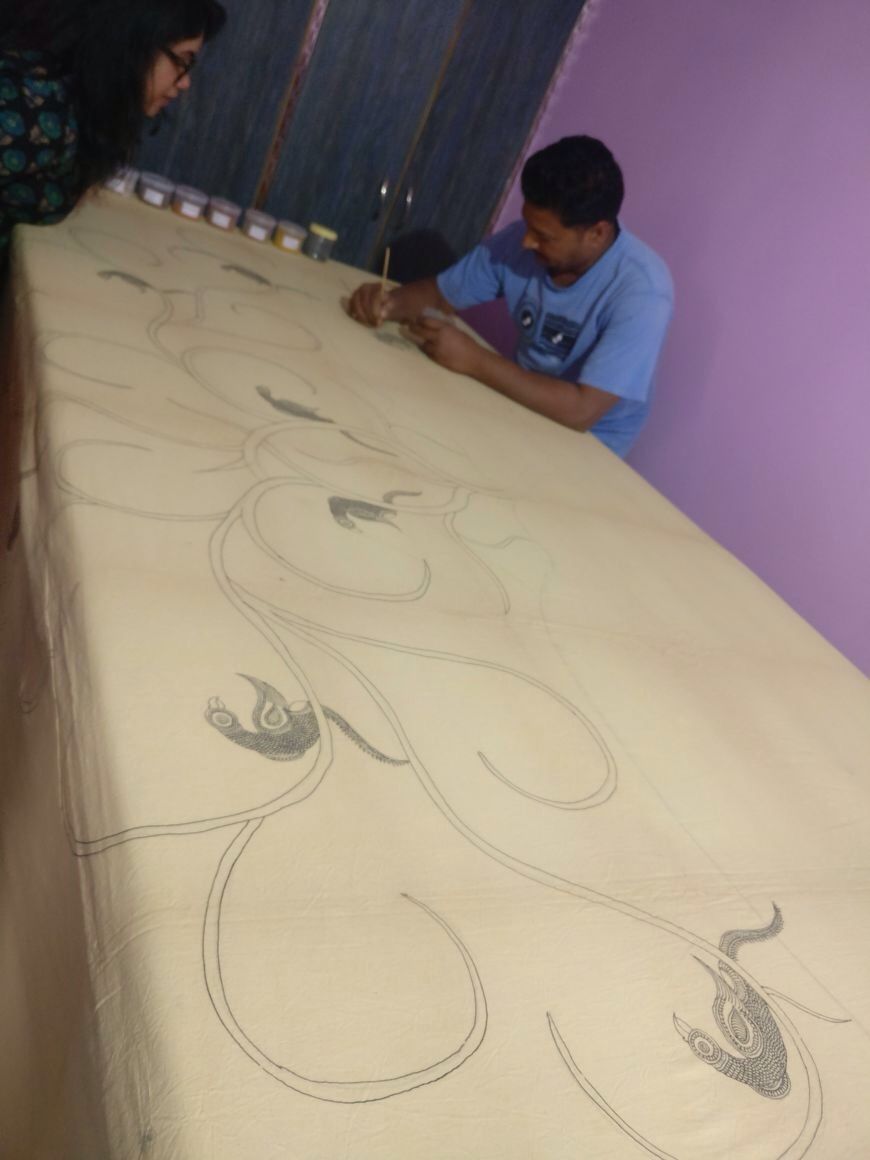 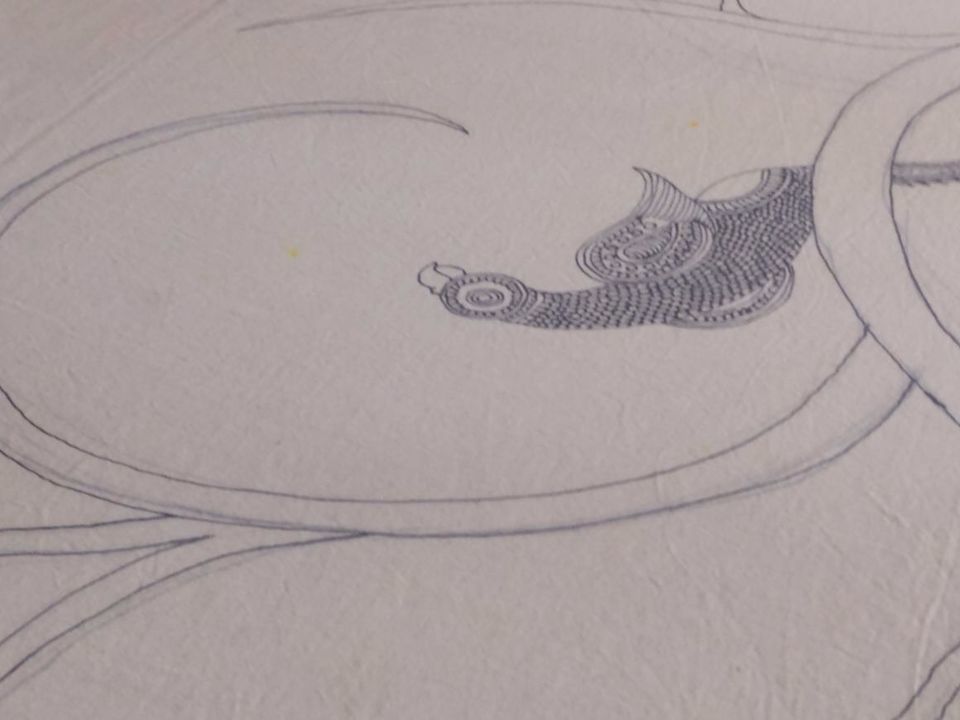 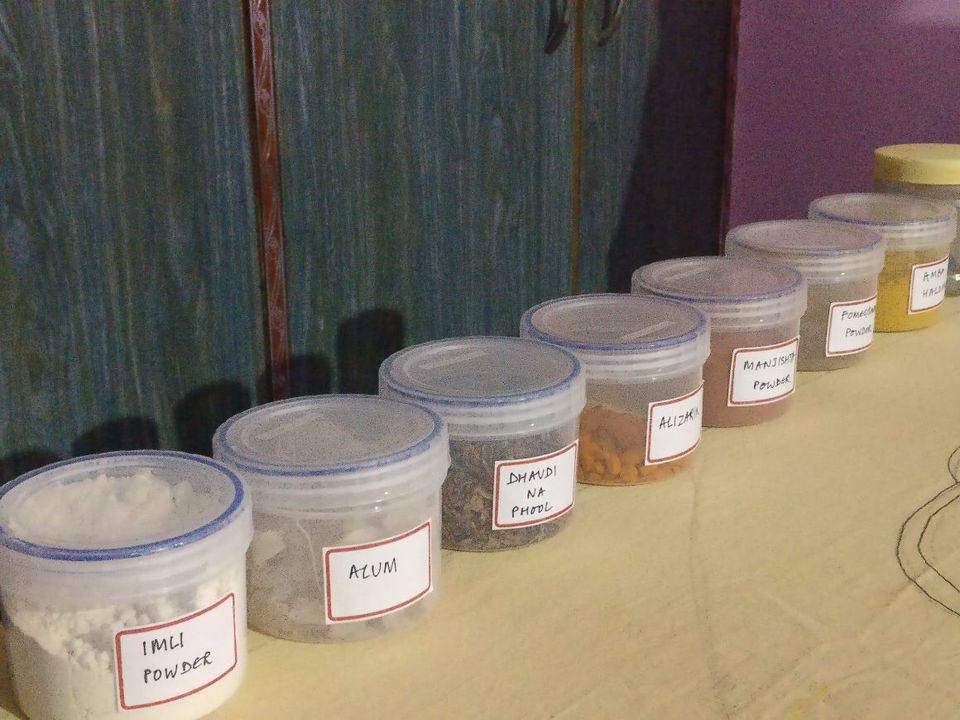 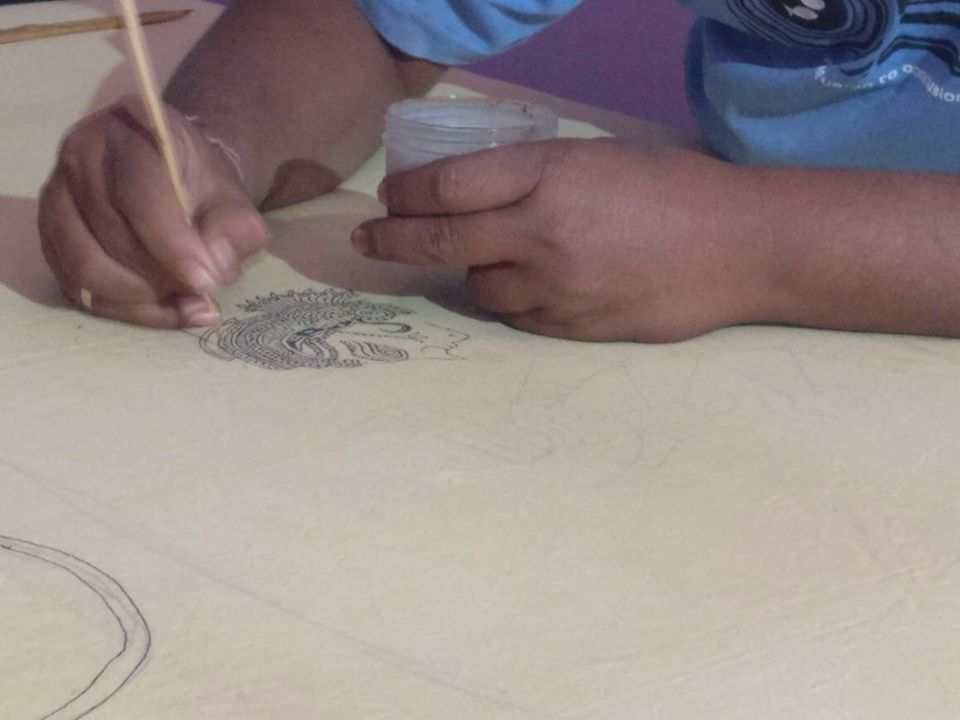 When you leave Bhuj, we suggest you make a pit stop in Ahmedabad to check out another unique art form. Even though Mata Ni Pachedi resembles the popular Kalamkari art from the south of India, the stories depicted in it have a local flavour. When we met Vasant Manubhai Chitara, an artiste whose family has been creating Mata Ni Pachedi pieces since several decades, in his home in Jivrajpark Ahmedabad, he refuted the story we'd read about how when the people of the nomadic Vaghari community of Gujarat were barred from entering temples, they made their own shrines with depictions of the Mother Goddess on cloth. According to his theory, the community has used this art form to tell stories related to the goddess and depict everyday rituals of worship. We watched as Chitara promptly took out a brush, dipped it in the paint and with swift strokes drew an outline in black while he explained the narrative of his current piece. This one depicting a typical day in heaven would cost you ₹8,000.

Getting there: Ahmedabad is 333km or 6 hours away from Bhuj. 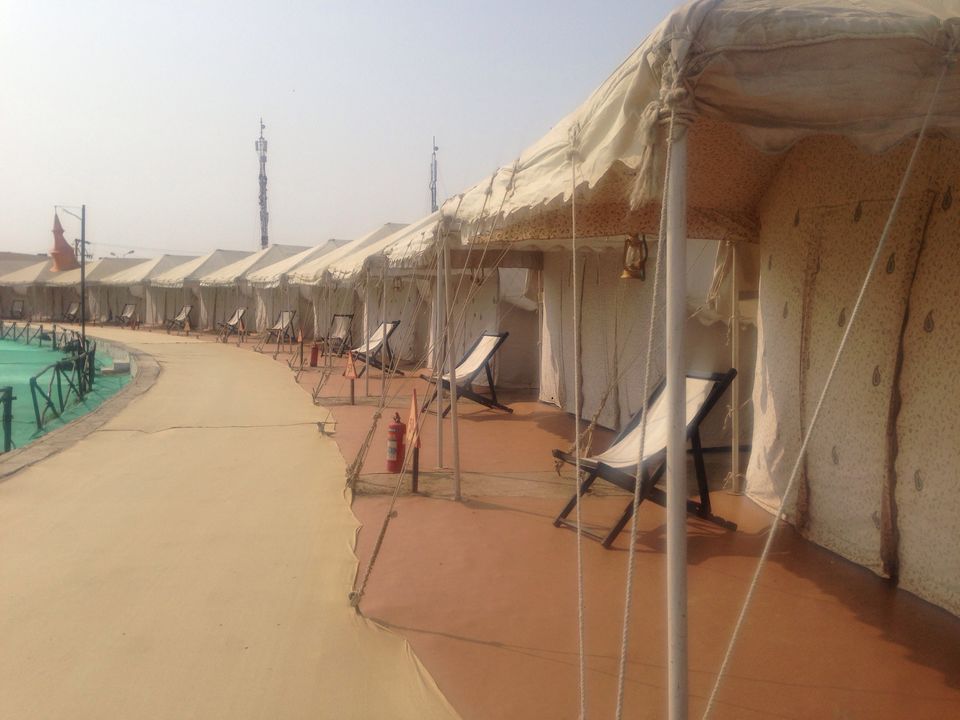 While there are options for all budgets in Bhuj, we recommend that you stay in the Tent City in Dhordo, which is 85km or 1 hour 45 minutes away from the city. The luxury tents can cost you anywhere between ₹5,500 to ₹9,000 depending on the category you choose. You can also get packages that include safaris to the Rann of Kutch and excursions to other nearby attractions. If you choose to stay in a hotel in Bhuj, then you could pick from Kutch Safari Lodge or Hotel Rudra as well.

Credits: All photographs have been taken by the author of the article.

The winter months are the best time to visit these quaint villages. If you've been already or know of any other must-see crafts villages in Kutch, write about it on Tripoto and help fellow travellers make the most of their visit.