The pictures of the moonlit white desert or the Rann of Kutch have been tantalizing and beckoning me since many years. The burning desire to spend a night at the Rann, experiencing it in a unique way was the foremost thought in planning a quick offbeat trip to Kutch.

We arrived in Bachau train station early in the morning, from where we were picked up and transported to the farm stay at Chobari where we were staying. Chobari was the epicenter of the Bhuj earthquake in 2002. It was reduced to a complete rubble, but government and local efforts have gone in to help the villagers to rebuild their houses & lives. We arrived at the farm stay of our host, Ramji.  After a quick nap to get over the ache of a poor night’s sleep in the train, we set out to explore the property. The rustic property immediately welcomed us with open arms and we meandered about the farm, enjoying the cool breeze sitting on a charpoy under the huge peepal tree. It was truly a home away from home.

DAY 1: Fossil Hill and Rann of Kutch at sunset and on the full moon night.

After reluctantly gobbling down a heavy home-cooked meal by our hostess and yet feeling unbelievably light, we set out to explore a fossil mountain nearby. A short trek up the hill left me gaping. The entire hill side was covered in sea fossils!! I picked up a fossil to admire it, only to be told that it was some million, perhaps some trillion years old. I struggled to acknowledge the age of rock in my hand and then suddenly I felt how insignificant was the passing of one's own lifetime on this earth’s timeline.  It was just taxing on my mind to imagine how an entire hill full of fossils could have come up in middle of nowhere, so far away from the sea and quite close to the Rann. Clearly earth was a different place many million years ago. The tectonic plate shifts over million years, the Indus river shift during the 19th century Bhuj earthquake and the gradual raising of the sea floor have dried up the once green land into a veritable desert, exposing some of the flora and fauna that were once found under water. Wandering around for almost an hour, I wanted to pick up each and every fossil and take it back home! They were so beautiful and exquisite. Sadly, the local villagers don’t know what a fossil is and they think it is mountain full of mango seeds!! Mining is also extremely rampant as the soil is very rich in minerals and semiprecious stones.

After a quick nap, we headed out to catch the sunset and spend a night at the Great Rann of Kutch. It is 7500 sq kms. of white salt desert in Kutch and is one of harshest & inhospitable climes in the world. For as far as the eye travels, there is just dead white land covered by a thick swathe of caking salt, laying out a beautiful white carpet welcome. There are just a few rotting plants and dead fishes dotting the landscape and there is no other sign of any habitation by neither humans nor animals. The drying salt cracks under the feet exposing the marshy wet sand, forming small puddles. It made sure I walked carefully and nimble footed lest I sink right into a muddy wet patch, fully soiling my shoes. The caking salt is not uniform and is in various stages of crystallization forming myriads of interesting patterns across the expanse. It is a spectacular landscape, equaling nothing else on this earth, for the vast flatness of the earth can’t be experienced almost nowhere on this earth, be it the mountains, deserts or the sea.

Armed with blankets and mats, we walked a few kms into the Rann in time to catch the setting sun. I set up our tripods to capture the beauty of Rann under the sunset & then the moonlit night. Having accomplished the ‘purpose’ of the visit by snapping up a few hundred pictures and still feeling frustrated for not being able to capture what I saw, I gave up to lie back and admire the beauty of the Rann which was basking & glowing in the warm white full moon’s light. I tried to capture the moment in my mind’s eye & heart. I paused to admire, reflect & introspect. I felt there was beauty in the vast nothingness. I realized that pure silence in middle of nowhere was actually deafening. There was overwhelming feeling of feeling insignificant in this huge planet earth. The Rann, they say, can’t be captured; it can be only experienced. Nothing else said could have been truer about the Rann. (For reading more about the experience of spending a night at the Rann, please read here:  www.thevisastampcollector.wordpress.com - Moonlight Night's Introspection at the Rann ).

Our next stop on the second day was to Dholavira which is a 3 hr drive from Chobari. Dholavira is one of the largest and important excavated sites in Indus valley civilization that spread around the river in current day Pakistan and North West India. Dholavira dates back to 4500 BC and the excavations indicate that there were 7 stages of settlements of the civilization were built over the old ones through the passage of time. The current day Dholavira is on an island in the Rann of Kutch Lake and the drive to Dholavira is beatific, surrounded by the White Rann desert on both sides of the road. Our first stop was at the open air fossil museum which is located right on the edge of the Island. Here one can see huge fossilized trees, which are app 180 million years ago. To imagine that kind of passage of time, sea, wind & sun on the trees that ends up converting them to stones is just not possible!

The lake right in front was dotted with thousands of flamingoes and cranes as far as the eye could see. The Rann of Kutch lake is actually the summer home for these birds where they find abundant food supply and can be far away from human presence. There are 3 huge hills that are located within the lake and are supposed to be the breeding grounds for the flamingoes. These hills are not accessible to humans at all, giving the birds much needed space to flourish. We walked around the fossil museum to get closer to the lake and observe the birds up-close.

The next stop was Dholavira excavated city itself. Maintained by ASI, the site was discovered in 1967 and has not been even till date fully excavated. It has one of the world’s earliest and best planned water conservation systems and world’s first signboards, written in ancient Indus script which hasn't been deciphered till date. The large imposing citadel has four entrances, one each in north, east, west & south side and is built with sun-dried brick and stones. There seems to be remarkable town planning as one can see neatly arranged houses, proper lanes and remains of a planned drainage system. The maniacal obsession of the civilization with water is reflected in the sheer number of water conservation bodies. Every part of the remaining imposing citadel has large reservoirs, huge deep wells, step wells and a well connected network of underground channels to link the water bodies and supply them to the houses. One can also see the cross-section of houses, reaching about half a foot in height. The houses were small and circular in later stages of the civilization, mirroring the current day ‘Bunge’ houses that are built in the villages of Kutch. Outside the north entrance once can see the remains of very large stadium with tiered seating arrangement.  In a quick pit stop to the museum attached to the excavated city, we were able to see all the discoveries of pottery, jewelry, beads, coins, figurines, tools etc. that give us an insight into the life of the early dwellers. A lot of the discoveries like the famed Harappa bull coin have been moved to the Museum of National History, New Delhi.

On the way back, we stopped at another part of White Rann called as the Ekal ka Rann to catch the sunset. After another hearty home-cooked dinner, we decided to abandon our cameras and spend few hours at night experiencing the serenity & solitude of the Rann yet again. Armed with blankets for it seemed a cold breezy night, we walked again to middle of nowhere, covered up ourselves and laid back to experience the Rann all over again. It seemed familiar yet so distant. It seemed inviting but not fully consuming.

On the third day, we drove to the little Rann of Kutch which is also the home to Asiatic Wild Ass. To protect the species from extinction, it has been declared as a sanctuary where the last few thousands of this species are trying to survive. It is a harsh and bleak landscape and like its elder sibling the Great Rann of Kutch, it is a flat desert. The only difference is that the greater Rann is a white salt desert, whereas the little Rann is a sandy desert. During hot summer days, the mirages are quite frequent, lulling the fauna to think that there is a water body nearby. Even I saw couple of mirages all around on the edges of horizon and was fooled into thinking that we were on an island in middle of a lake!

The best part of the day was stalking a herd of wild asses for almost an hour to get an up-close picture. The wild asses are very timid and every time I got even 70-80ft near them, they would timidly walk farther away. Some time later, when they got a bit more comfortable with the seeming fact that I meant no harm, I was able to go within 40-50ft near them and get some pictures. It meant that we had to observe, wait, and stalk them for almost an hour under a hot summer day!

Back home, we recuperated from the energy sapping hot day and walked to a nearby lake which is occupied by many migratory birds. A short, relaxed boat ride around the lake helped us to watch these birds get up-close and wonder about their migratory patterns. How do they brave all the hardships across a journey of thousands of miles to reach the same place every year!

At night there was more of the home-cooked goodness along with a cultural show that hosts and his family put up. We sat around the bonfire to gleefully enjoy the them dancing to local songs. Where else could one get such home like hospitality at any hotel!  I sat wondering about our offbeat experience at Rann. The Rann is actually quite greedy. It allures you with nothing, makes you invest yourself fully by immersing in it and then takes a part of you away with it, a part that wants to be consumed by it, and leaves behind a part that will always feel that you belong here and nowhere else.

Sure enough, when I opened the doors to my home the next day, I felt like a stranger in my own home. I felt incomplete as though I had left a part of me somewhere in the vastness of the Rann.

To read more about Gujarat travels and other experiences, click here : thevisastampcollector.wordpress.com

Chobari is 100 kms/ 2 hrs from Bhuj. Bhuj is connected via flights and trains to major cities like Delhi, Ahmedabad & Mumbai. The nearest railhead to Chobari is at Bachau which is 30kms/ 1 hr away. 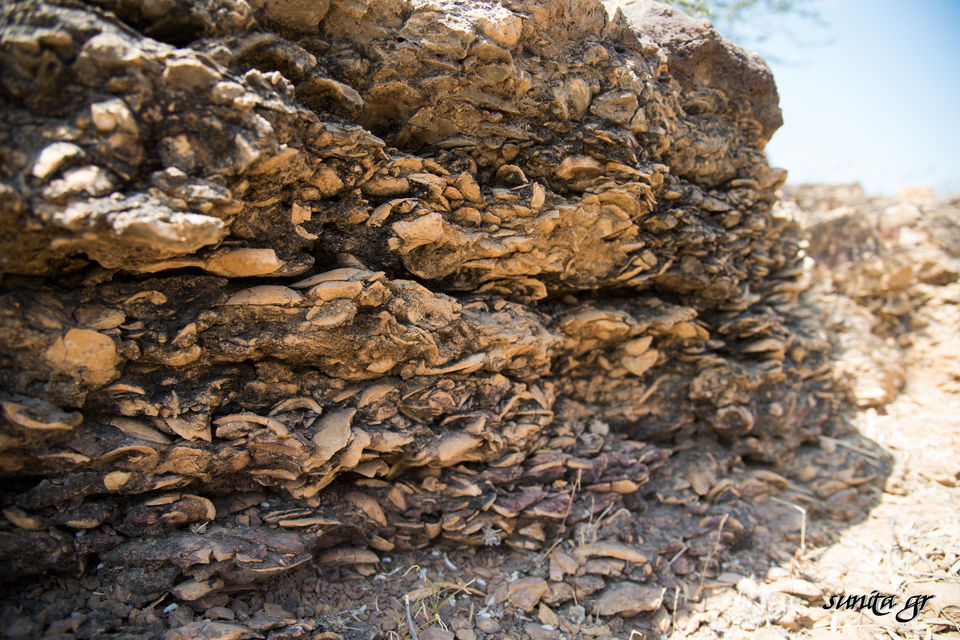 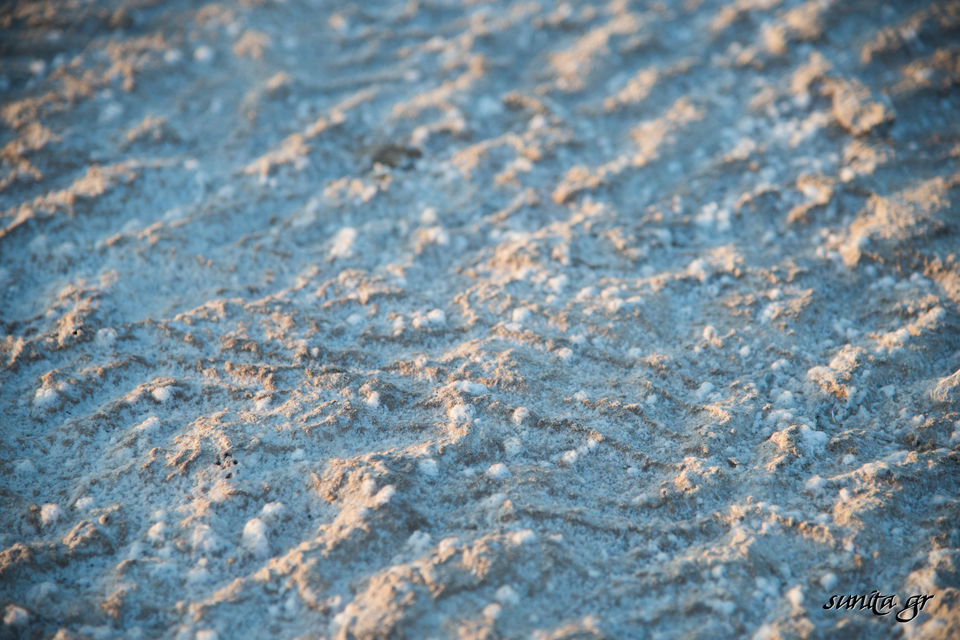 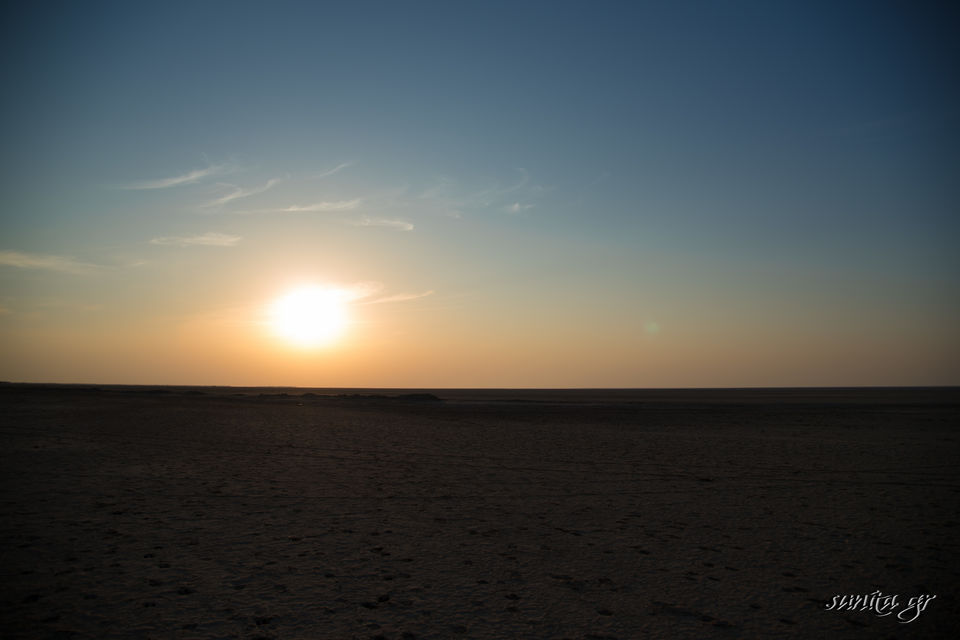 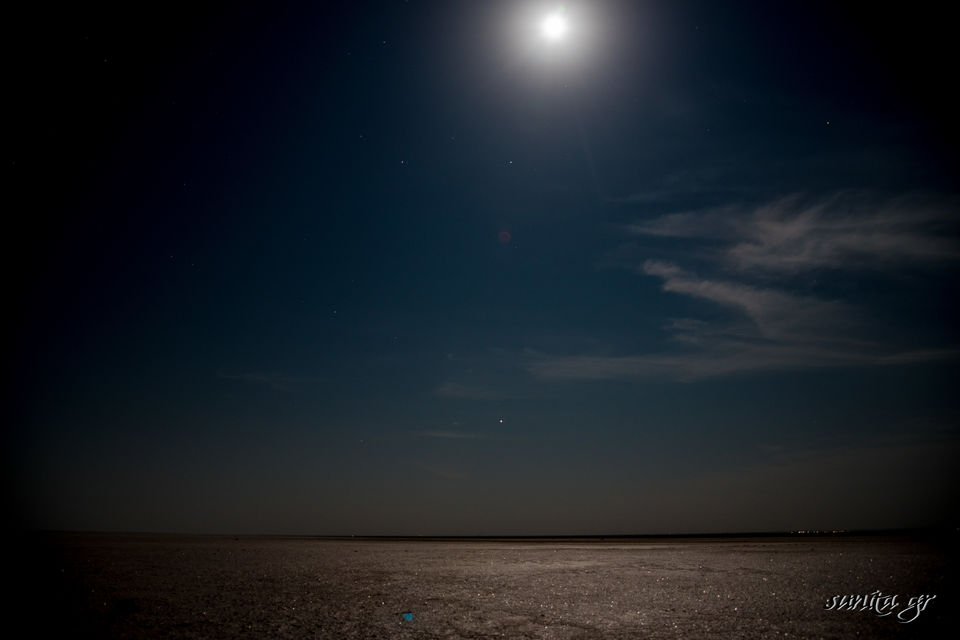 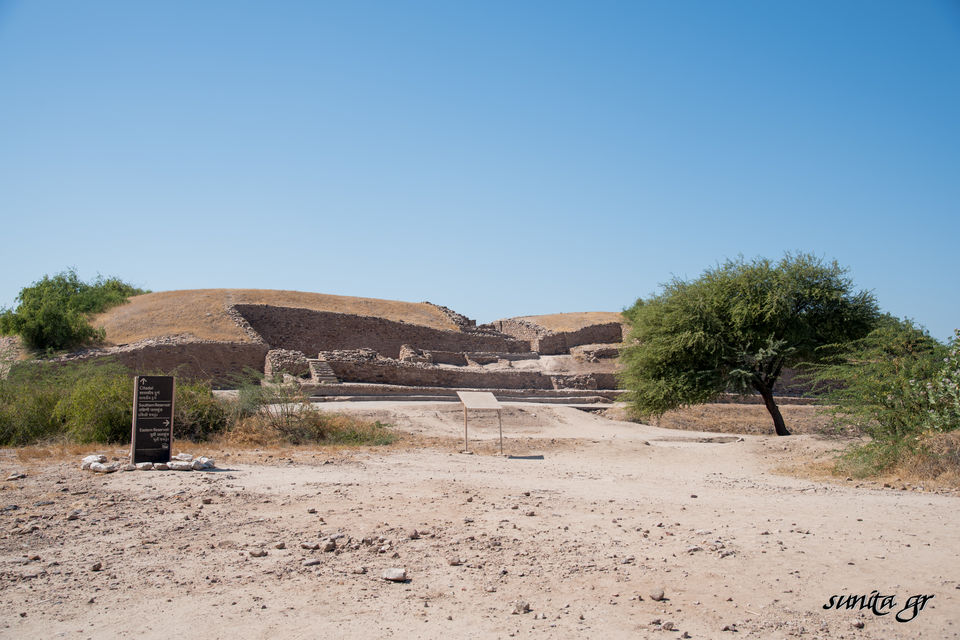 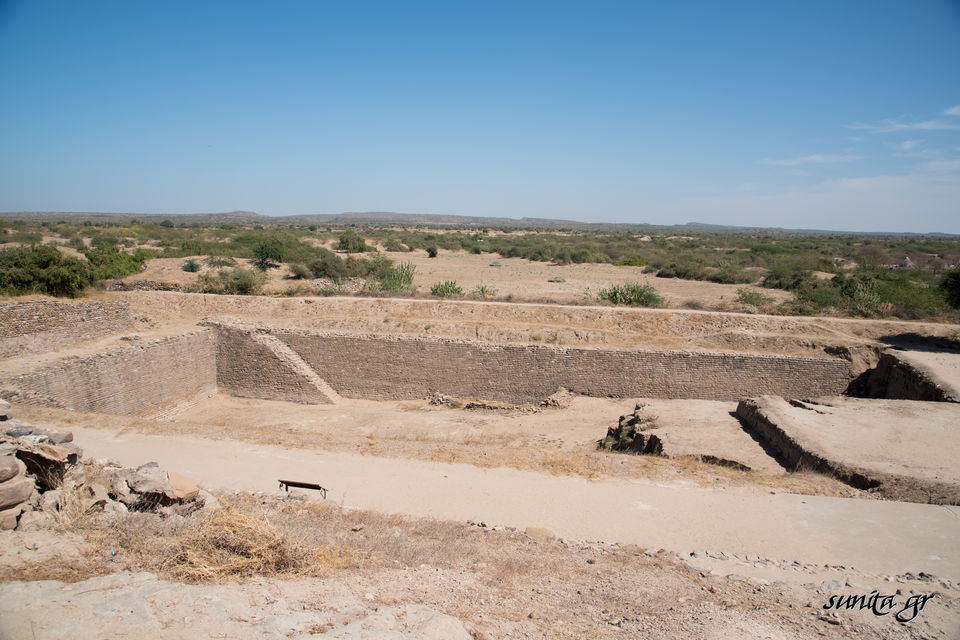 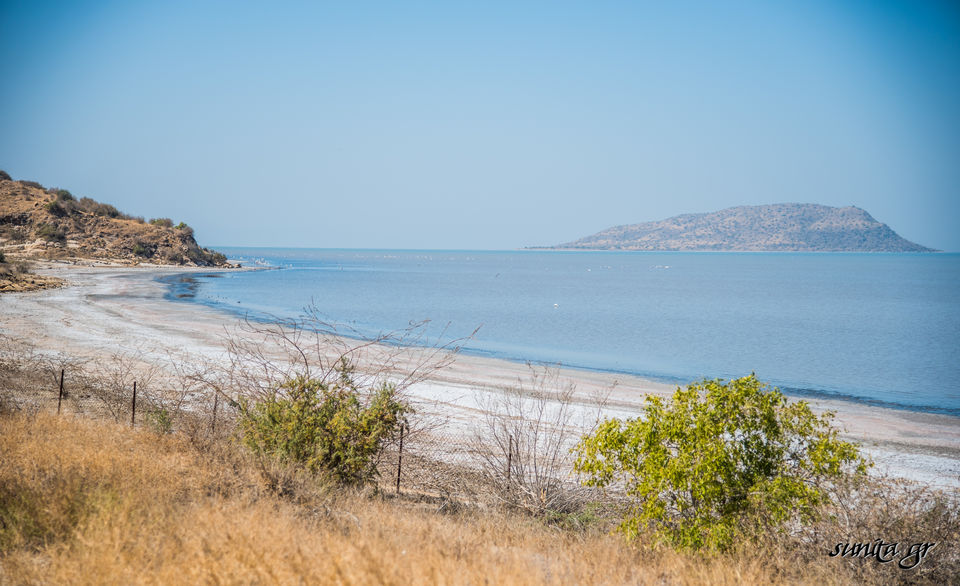 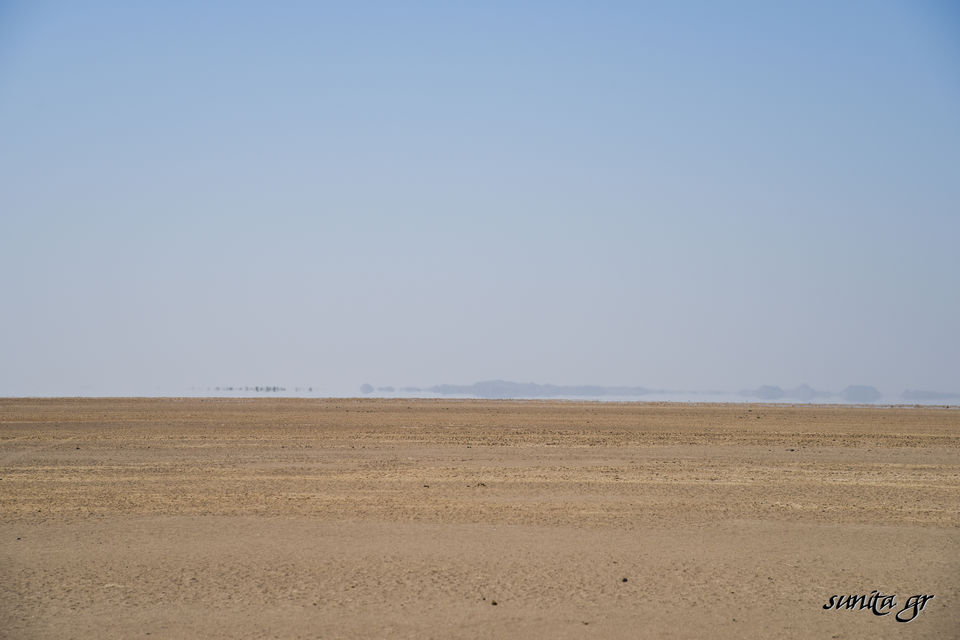