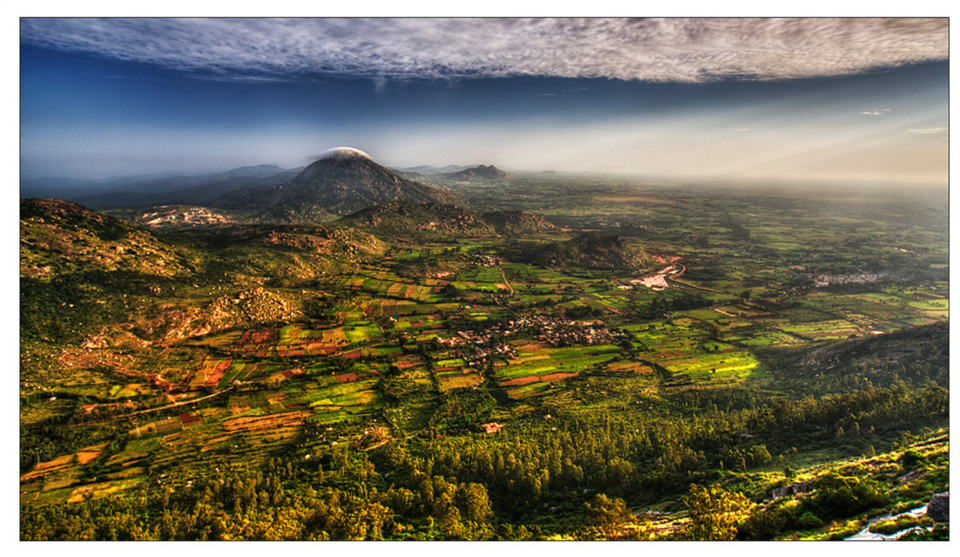 Thanks to its perfect location and geography, planning a quick road trip from Bangalore is never difficult. From breathtaking waterfalls to pristine hill stations and serene beaches, there are a number of places to visit around Bangalore, the silicon valley of India has a variety of options to satisfy distinct recreational needs.

Now a road trip can be with your family to grandma's house, a thrilling adventure with your best friends, or a romantic escape with your significant other through some jaw-dropping scenery!

But the best kind of road trips are the ones that give you the freedom to sit back and enjoy the ride. Here's a list of road trip ideas from Bangalore that you can take on the upcoming long weekend!

The Best Places To Visit Near Bangalore This Weekend

Thirty-second rundown: Around 89km from Bangalore, Chunchi Falls is in Kanakapura, Karnataka. You will have do a bit of rock climbing or crawling to get to the falls but when you get there the sight of water gushing down into a series of cascades is guaranteed to leave you spellbound. 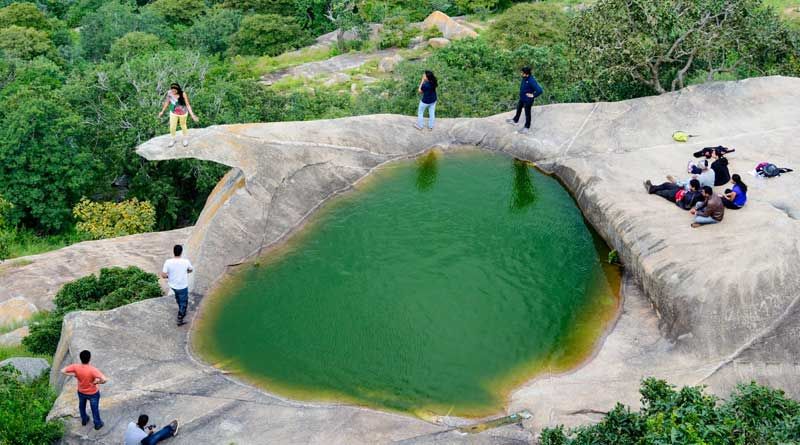 Thirty-second rundown: Avalabetta Fort is in the Chikkaballapur district in Karnataka, and if you like to check out dangerous places, well, this could be your next destination. For explorers and adventurers, Avalabetta Fort offers enough opportunities for hikes. And for people with a keen interest in mythology, there's a small temple on top of the hill where the fort is situated and the priest there can enlighten you with the mythological significance of this place, so make it a point to speak to him.

Thirty-second rundown: An extraordinary destination for thrill seekers, Makalidurga gives trekking a whole new meaning. The place is guaranteed to delight you with its blend of hilly terrains, pathless trails, ruined fortress and wildlife. The cooler months of September to February are the best time for trekking in Makalidurga. A helpful tip is to carry sufficient water and food during the trek.

You can book an Ola Outstation from anywhere in Bangalore and find it at your doorstep within an hour at the maximum.

Thirty-second rundown: Nandi Hills, also known as Nandidurg or Nandi Betta, is Bangalore's favourite weekend getaway within 200km. If you're an avid photographer and are moved by the delightful perspectives of mother nature, then Nandi Hills is the perfect getaway for you.

Thirty-second rundown: A perfect combination of comfort and wild, Masinagudi is a whimsical place where nature is untouched and wilderness embraces you!

Thirty-second rundown: Known for its elephant camp on the banks of river Kaveri in Kodagu district, Dubare Forest is a perfect getaway from Bangalore for all wildlife lovers. At Dubare Forest, you can indulge in trekking, elephant rides, angling and stream rafting. All these activities are facilitated by wilderness hotels and resorts. Check it out here.

Thirty-second rundown: Mountains enveloped in mist and clouds at an arms distance, Sakleshpur is all about chatty locals, grazing cows and paddy fields. If you are keen on bird watching there are many that will come your and for nature lovers, trekkers and those with a love for the outdoors, this place is a paradise.

Ola's dedicated customer support team is always at your service to help solve any problem on the road!

Thirty-second rundown: ‘The Land of Loom and Lores’, Kannur is probably one of the best spots for a weekend getaway around Bangalore. Mid-way on the Mangalore-Calicut route, Kannur is renowned for its amazing climate and picturesque beauty.

With Lakshadweep Sea on the west and the Western Ghats on the east, the beaches of Kannur are extremely enchanting. For a long weekend, what can be better than the wind blowing in your face, near your ear, feeling the sand in between your toes and watching the small creatures on the sand?

Thirty-second rundown: From cave exploration to camping, bonfire, rock climbing, abseiling and rappelling, you can expect a multitude of experiences at Antara Gange

With Ola Outstation, economical and transparent billing is guaranteed! You can see all expenses of your trip upfront before booking your cab.

Thirty-second rundown: Remember the grisly dacoit Gabbar from the Bollywood blockbuster Sholay? Ramanagara is the place that was his lair in the movie. Encompassed by seven slopes, Ramanagara is every rock climber's paradise, and also a great weekend getaway from Bangalore within 200km. The territory around Ramanagara is also known for some of the world's oldest granite outcrops. So, if you love nature, Ramanagara will be a treat that is such a short drive outside the city.

Thirty-second rundown: Situated between Shivanasamudra Falls and Mekedatu, on the banks of Kaveri, Bheemeshwari is an abode of serenity located about 100km from Bangalore.

If you're planning a trip to Bheemeshwari, then I suggest you stay at the Bheemeshwari Adventure and Nature Camp for some delightful nature experiences such as jungle camps, rope walking, kayaking and a host of other activities. The best time to visit Bheemeshwari is just after the monsoon, between August and February.

Thirty-second rundown: Srirangapatna is the final abode of Tipu Sultan and his father Hyder Ali, two of south India’s most admired rulers. Encased by river Kaveri, the town of Srirangapatna, for a brief period of time, was the capital of Mysore. Keep at least six to eight hours to fully enjoy the joys of Srirangapatna.

With Ola Outstation, you can pay for your ride at the end of your trip. You can also save yourself the hassle and worry of carrying cash with you by paying with Ola Money!

Thirty-second rundown: One of South India's most acclaimed travel destinations, Mysore is known for its sparkling imperial legacy and it's World Heritage listed palace, the Mysore Palace.

Don't forget to taste authentic Mysore Pak while you're there. Make use of Ola’s free, in-cab Wi-Fi and search for the best place in Mysore for Mysore Pak.

Thirty-second rundown: Horsley Hills is a charming hamlet that makes for the perfect weekend getaway from Bangalore. The drive to Horsley Hills is absolutely mesmerising, with thick vegetation on both sides of the road. The hills are lush with dense forests and make for an ideal place to visit around Bangalore for nature lovers.

Thirty-second rundown: Kanipakam is one of the most popular pilgrimage places to visit around Bangalore. A small village located in the Chittoor district of Andhra Pradesh, Kanipakam is famous for the Varasiddhi Vinayaka Temple (Kanipakam Temple). It is an ideal tourist place near Bangalore to visit over the weekend. The temple is a rare one with a self-manifested idol of Lord Ganesha—one that continues to grow in size!

Thirty-second rundown: A small village in Andhra Pradesh, Lepakshi is one of the most iconic heritage places to visit around Bangalore. Founded in the 16th century, Lepakshi is home to some of the finest temple architecture and paintings of the Vijaynagar era, including the monolithic statue of the Nandi.

Places to visit in Lepakshi: The temples of Papanatheswara, Raghunatha, Srirama, Veerabhadra and Durga, Lepakshi Nandi

Thirty-second rundown: Shravanabelagola in Karnataka is perhaps the most famous Jain pilgrimage place to visit near Bangalore. The Gomateswara Temple here, built on top of the Vindhyagiri Hill at an altitude of 3,347 feet, is the main point of attraction because of its statue of Lord Bahubali. This is supposed to be the tallest statue in the world carved out of a single block of granite! It stands at 58 feet.

Thirty-second rundown: One of the most popular hill stations to visit near Bangalore, Yelagiri is a cluster of 14 hamlets that lie between four mountains. Orchards, rose gardens and green valleys surround these hills. It is also a popular destination for trekkers.

Thirty-second rundown: Built in 1932, Brindavan Gardens are one of the most picturesque man-made tourist places to visit around Bangalore. The garden was designed by Sir Mirza Ismail, Diwan of Mysore, based on Shalimar Gardens of Kashmir in the Mughal style. Spread over an area of 150 acres, the Brindavan Gardens are amongst the best gardens in India.

Thirty-second rundown: Bannerghatta National Park is a treat for nature lovers everywhere. Boasting of a huge variety of flora and fauna, this park is spread over a massive area of more than 100 sq km and is one of the most popular day-trip places near Bangalore. What is unique about this place, is the number of establishments it hosts within its confines—country’s first butterfly park, a zoo, an aquarium, and historical monuments.

Thirty-second rundown: Somnathpur is well known for the beautiful Prasanna Chennakesava Temple—one of the three finest representations of Hoysala architecture that have been nominated for UNESCO World Heritage Site status. This is one of the most popular heritage places to visit around Bangalore. The temple is known for its minute and intricate carvings and sculptures with metal like polishing.

Thirty-second rundown: Ranganathittu Bird Sanctuary is a set of six islets on the banks of River Kaveri and is popular among wildlife enthusiasts as one of most interesting places to visit around Bangalore. The sanctuary is a breeding ground for many migratory birds from all over the world and is home to a wide species of native birds, including cormorants, darters, white ibis, spoon billed storks, egrets, herons, terns, swallows, and kingfishers among others.

Thirty-second rundown: Biligirirangan is a lofty hill station near Mysore. It is one of the most popular tourist places near Bangalore within 200 km, and rightly so considering that this place has a little something for everyone. It is considered to be the wildlife corridor that connects Eastern Ghats to Western Ghats. It is also a popular trekking and safari destination in addition to being a pilgrimage site thanks to the presence of the 500-year-old Biligiri Rangaswamy Temple.

Thirty-second rundown: One of the most popular weekend getaways near Bangalore, Sangama and Mekedatu are two places just four kilometers apart. Sangam is the place where the Arakavathi river merges into the Kaveri, while Mekedatu is the place where Kaveri flows through a deep, narrow gorge making for a picturesque sight. The place is known for its scenic beauty and geographic importance.

Thirty-second rundown: Bilikal Rangaswamy Betta is a popular trekking destination for people living in Bangalore. In fact, it is one of the most popular tourist places to visit around Bangalore. At an elevation of 3780 ft, it provides a moderately difficult trekking trail that begins at Konala Doddi (about 6 km from Bilikal Betta) The hill, which is named after the temple of Bilikal Rangaswamy Betta, is surrounded by forests and is home to a number of wild animals that can be spotted during the night.

If you've already decided to go on one of these places to visit around Bangalore, Ola gives you the facility to book an Ola Outstation cab well in advance! So pack your clothes, hiking boots and appetite and hit the road with Ola Outstation because road trips are best enjoyed with chauffeur driven, well-maintained and comfortable cars.

Check out the Bangalore travel guide to read more and find out about the best things to do in Bangalore.

Frequent Searches Leading To This Page: