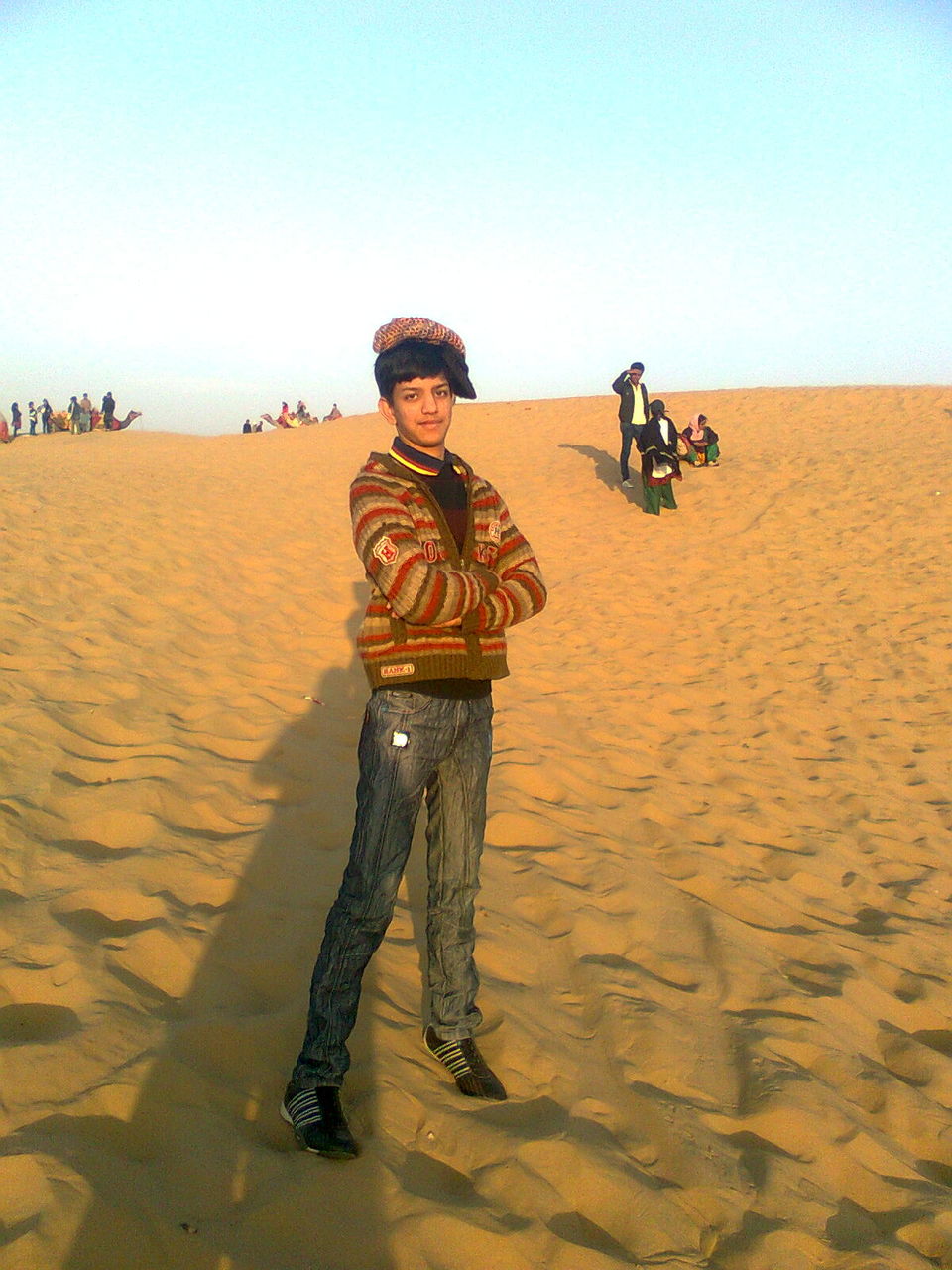 The Golden City
One of my most fascinating and exciting trip with my family was the one to The Golden City of India, Jaisalmer. Basically there were two reasons for me to visit the city; one was its name and other its vicinity. Jaisalmer is the largest district of Rajasthan and one of the largest in the country, hugged on the west south-west by the Pakistani border. The city got its name from its discoverer, Maharawal Jaisal Singh who established it in 1156AD. Jaisalmer is sometimes called the Golden City of India because the yellow sand and the yellow sandstone used in every architecture of the city gives a yellowish-golden tinge to the city and its surrounding area. The town stands on a ridge of yellowish sandstone, crowned by a fort, which contains the palace and several Jain temples.

To reach Jaisalmer one can opt for either airplane, train or road transport. as for me, being a distant place we didn't opted for road. We chose train to travel getting an on journey scenic view. It is being advised often that if you want to feel the scorching heat of daytime and ice cooling chills of night at the same place, Jaisalmer is the place you must go. We had planned my trip to the golden city for 2 nights 3 days. Our journey from Delhi to Jaisalmer was of about 18 hours. We boarded my train from New Delhi Railway Station at night and reached my destination in next day afternoon. Since the hotel booking was totally my responsibility and being the first time experience of booking room online in advance I was a bit scared about the virtual and reality difference. That's why I decided to book rooms in two different hotels alternatively. We reached Jaiselmer at about 3pm the next day of boarding the train.

At the exit of railway station, a man in his mid thirties wearing traditional Rajasthani clothing was waiting for us holding my name plate in his hand for identification. He loaded my luggage in the back of the zypsy that was sent by the hotel for pick up. Distance of the hotel from railway station was about 4-5 kms. The moment we reached hotel my dad started completing formalities for confirming the room booking. After about 10 minutes of paper work we finally got our keys to the room where the luggage was already well settled. Since, the long train journey was tiring and exhausting, we decided not to explore the city same day. The hotel staff told us that at night the city looks like glittering in gold if seen from a specific view, so we decided to adore our eyes with gold glittering city. Although there is not much to wander in Jaisalmer, but the market is widely spread.

As per the plan, the next day was registered for sight seeing.. The tourist spot where most of the tourists are being taken to, was about 12 kms from the hotel we stayed in. Hotel staff asked my dad for cab booking but the amount they were charging was not reasonable. Fortunately, while covering the length and breadth of the market we found a private cab driver who readily agreed for wayfaring. Next day, we left our first hotel with luggage for the second one which I had booked online. The cab driver met us at hotel's entrance when we checked out at about 10:30 am. He took us to second hotel where we rushed as we were getting out of time for our expenditure. As my dad completed the paper work, I quickly placed our luggage in the room and ran out for scenic view of Thar Desert. There's a fort too in Jaisalmer but since I have visited about 20 different forts, i was least interested in visiting it. My main reason of excitement was the desert which I would be feeling and standing upon. After travelling for about 30 minutes, we reached a place where about 40-50 camels were seated in a row with their masters for providing rides to the tourists. Even the camel race was also being organised but to take part in it the fees was about 800 per person. There were two different routes (short route & long route) for the ride with two different prices as respectively. We almost spent about 5 hours wandering into the Thar Desert. We had many moments being captured in the camera and mobile, one of which I have posted here too. Although there was not much about roaming in the desert, we were basically waiting for the sunset. I had never seen the sun setting in the never ending view of desert and this time I was damn too sure not to miss it. After the sunset, we returned to our hotel and had dinner. The way of presenting the dinner in this hotel was traditional. We were asked to sit on mat laid on the floor and then food was served. Next day, we had our train booking back to Delhi which ended our exciting trip to Jaisalmer.

Although it was a fantastic trip, but one thing that dissatisfied me was the quality of hotel and services I got there. While booking online I was shown that I would get free wifi, bath tub, bone-fire, and much more in the hotel but I hardly got anything as such. In both the hotels, there were a lot of things missing which I was shown online while checking out different hotels. So its my personal advice to have a deep research on whatever you are planning so that afterwards you won't regret. One more thing I wanted to say that is, in such places like jaisalmer locals generally rob tourists by asking a lum-sum amount for no so worthy services as well. So one must take care of such things as well.

SO keeping these things in mind..

GO and confront the golden desert...!!