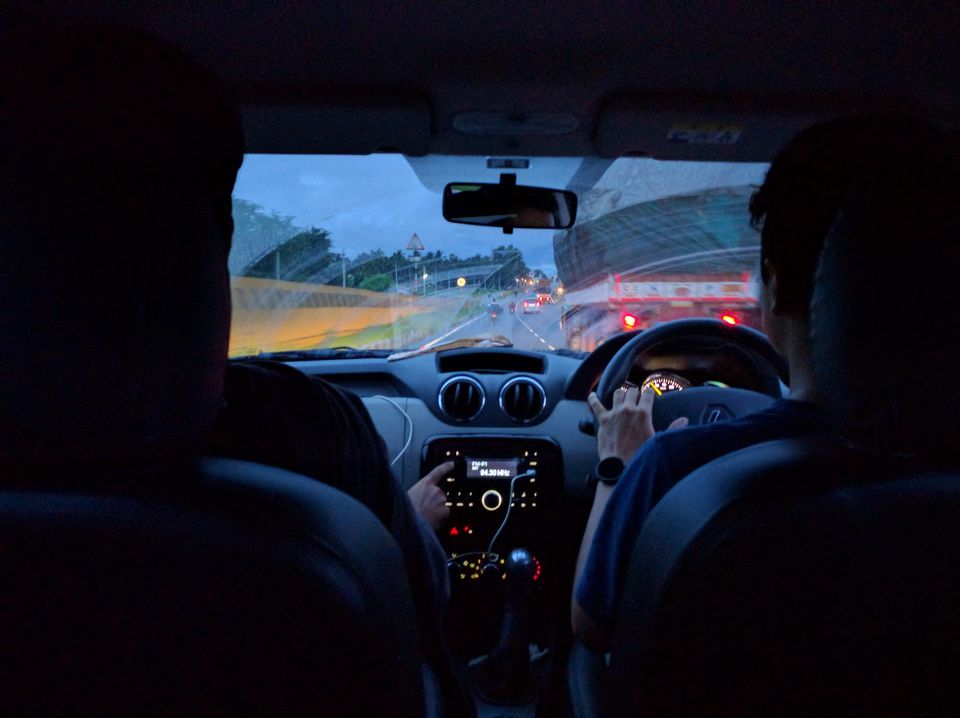 No, This was not a trip to United kingdom. This was a trip to Uttara Kannada district in Karnataka. This story is about the amazing dangerous adventures we had while we explored the beauty of Karnataka .

If you are looking for an ideal plan or tips for your itinerary, this will totally not help you but do check out the places.

This happened when we were in 4th year of engineering. As usual the trip plan went through so many iterations, from Engineer's mecca (Goa) to Gokarna to what not and finally decided on UK. So for people who don't know, UK and the Malnad region, looks lovely during monsoon filled with greenery everywhere and there also exists many beautiful waterfalls located deep inside and known only to few. We plotted the places, wrote down the itinerary, booked stays, and booked 2 zoom cars. Everything set !

The day arrived, we took the cars aaand got stuck in Bangalore traffic. By the time we reached outside Bangalore we were 3 hours late of our itinerary.

So as per the plan, we are supposed to reach a place called Sagara and stay there for the night and in early morning visit Jog falls and from there to continue the journey. The roads are bit narrow and in the night times need to be a bit extra careful as there are lots of lorries on the way. Since we were 3 hours late and also due to the monsoon rains we had to drive a bit late at night to catch up with our itinerary.

After a quick stop for dinner we headed back on the tracks. Few kms down from there and a drunk guy comes and hits our first car. Terrified with the scene, the first car people made an instantaneous decision and fled away. Being equally shocked to see the scene from behind we guys decided that if anyone asks, we have no idea about the people in first car and we got down to check what had happened to that person. Luckily the drunk guy was perfectly fine with no damage what so ever except the mumbling in drunkenness. As we moved forward to catch up with the other car, the driver was fumbling with fear thinking that he had killed a person. After explaining everything and consoling the driver, we moved forward.

The time was almost 1:00 AM in the night and we still had 70Kms or so to reach our destination. All of a sudden the first car drifted to make a turn, instead it turned all the way to the backwards sliding in its speed toppled to its side on the road end. Luckily everyone in the car were safe. This situations where there’s no one else on the road, no network on our mobile phone and no help what so ever. We used the other car went back some 20 Kms to find a lorry who could help us to pull the car back on roads . After 1 hour of lots of trials and lots of drama the lorry driver along with some local people helped us to get the car back on track. The car top was bent, front glass was shattered and the doors were jammed. As per the zoom car customer care, we had no other options but to drop the car in the service center which was 30KM back. So 2 of them rode the jammed car with the shattered glass back to the service center and returned back in morning, while the rest of us, shit scared, made it to the destination in 30KM/Hr in the second car.

So much for the itinerary.

So we wake up late tomorrow morning and decided to forget everything and to enjoy the rest of the days. One problem, there’s only one car now ! So we decided that we’ll ditch the itinerary, we’ll try to cover some places we had planned , some in car and some in bus.

We went to the mighty Jog Falls around 11 in the morning. Since it was the beginning of monsoon, the place was cool enough and the water was just starting to fill. Some of us enjoyed the view from the top while some took the trek to climb down some 500 steps or so to check the different view. The trek down the stairs is also good, with some weird orientations fully covered with lush green tress everywhere. We got down, enjoyed the views , took some photos and came back.

Riverbank on the way 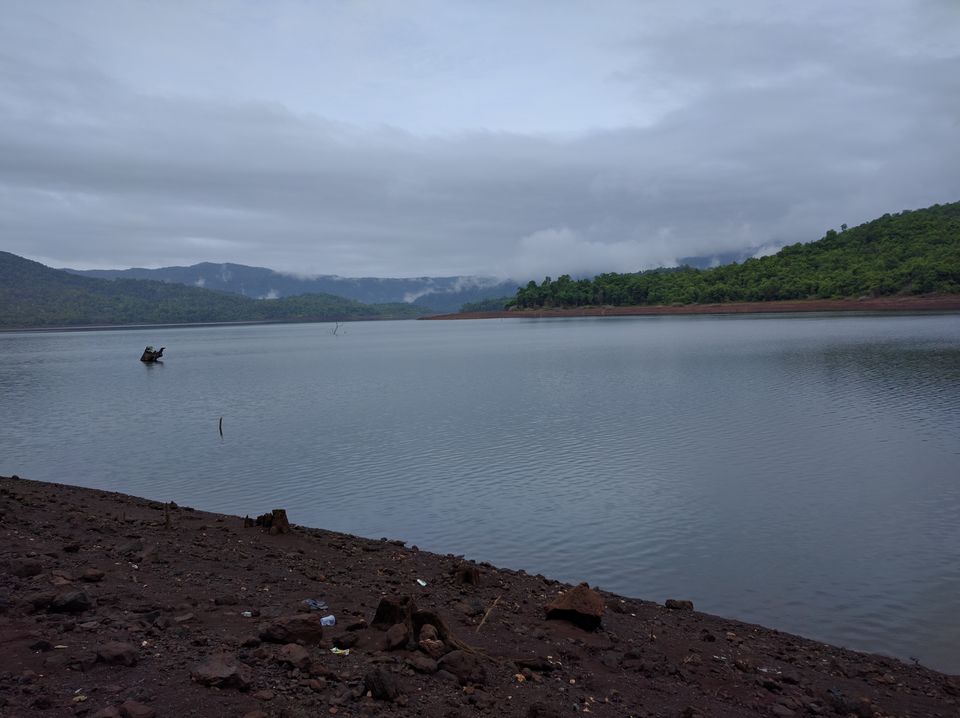 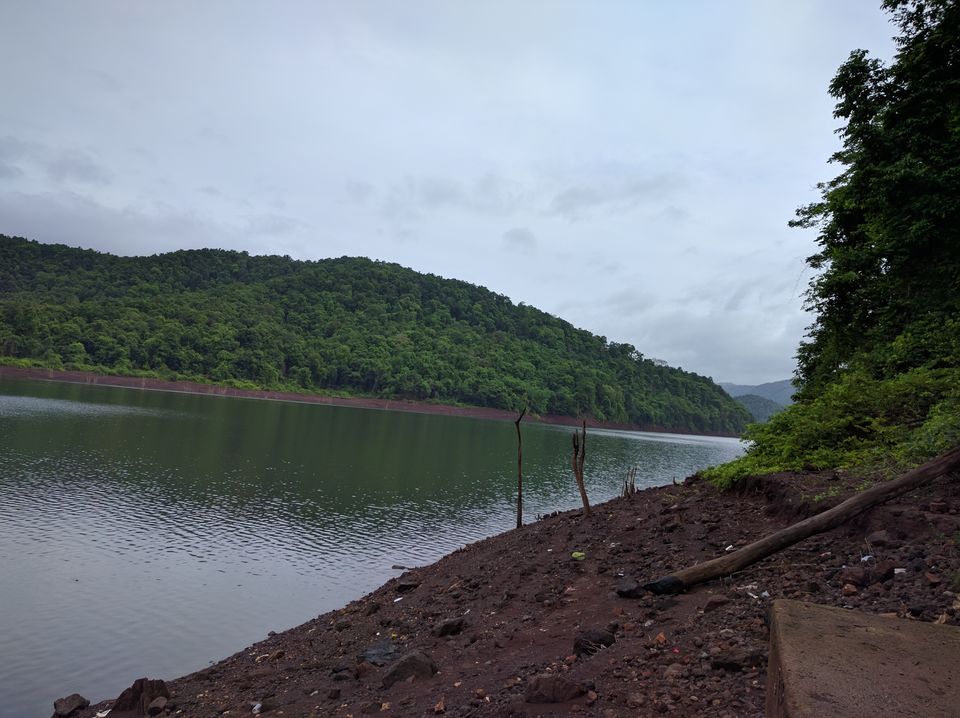 From there we planned to goto a place near Kumta called the Nirvana resorts. This is not exactly a resort but a beautiful local and cheap accommodation for us. What more, we get a private beach called the Nirvana beach in front of it. While it was my turn to take the bus, on our way to the bus stand , a taxi driver offered us to take us to the place for the same price as of the bus. What we didn’t know before making a deal with him, is that there were 5 more people in the Omni. We somehow got packed inside the omni and started our journey. We started talking to the people inside and then we got to know that they were in yellapaura to attend a marriage function and after a hefty meal the driver was interested to make some money for the day and called us. Those people were very friendly to us. We heard some of their local stories , listened to their funny weird local song which will crack anyone when they hear it for the first time. And finally we reached the place .

Nirvana resorts were relaxing wonderful place. Since the place was deep inside the city, very few people knew about this place and we had the entire resort for ourselves. The simplicity and the beauty of the place made us fell in love with it. We chatted for a long time , played card games, told some old stories, played on the beach , explored the nearby places and had a very relaxing day. 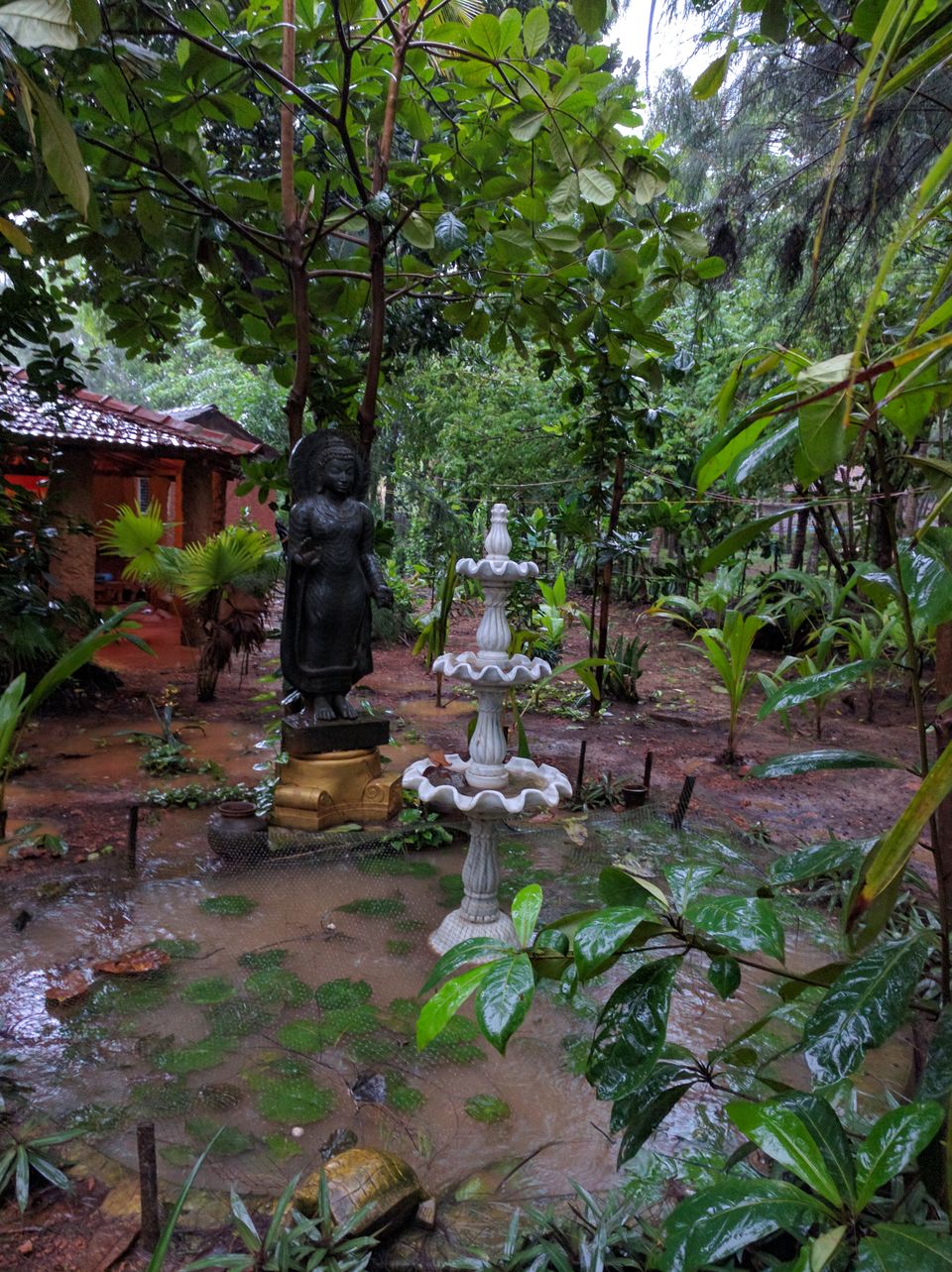 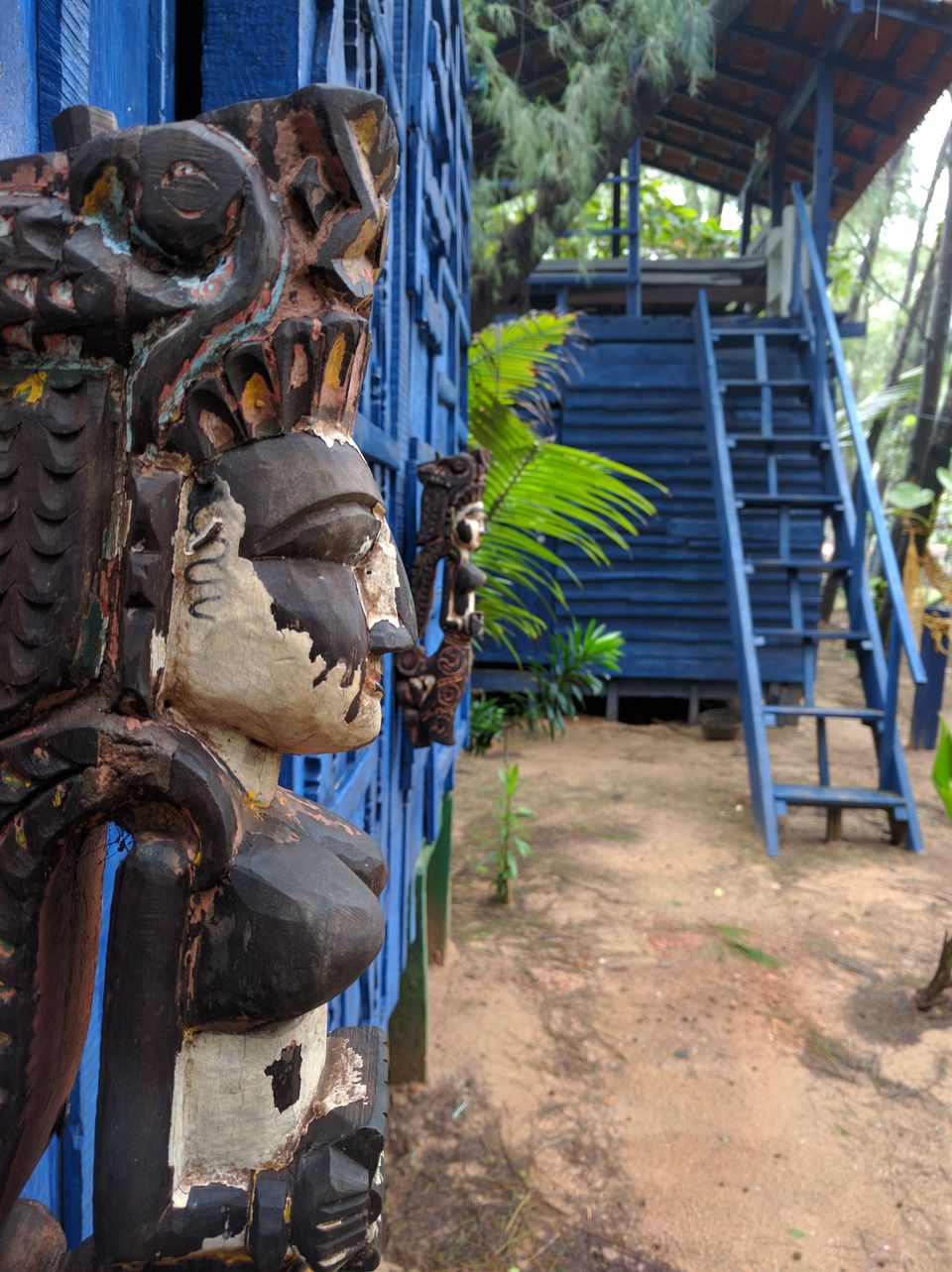 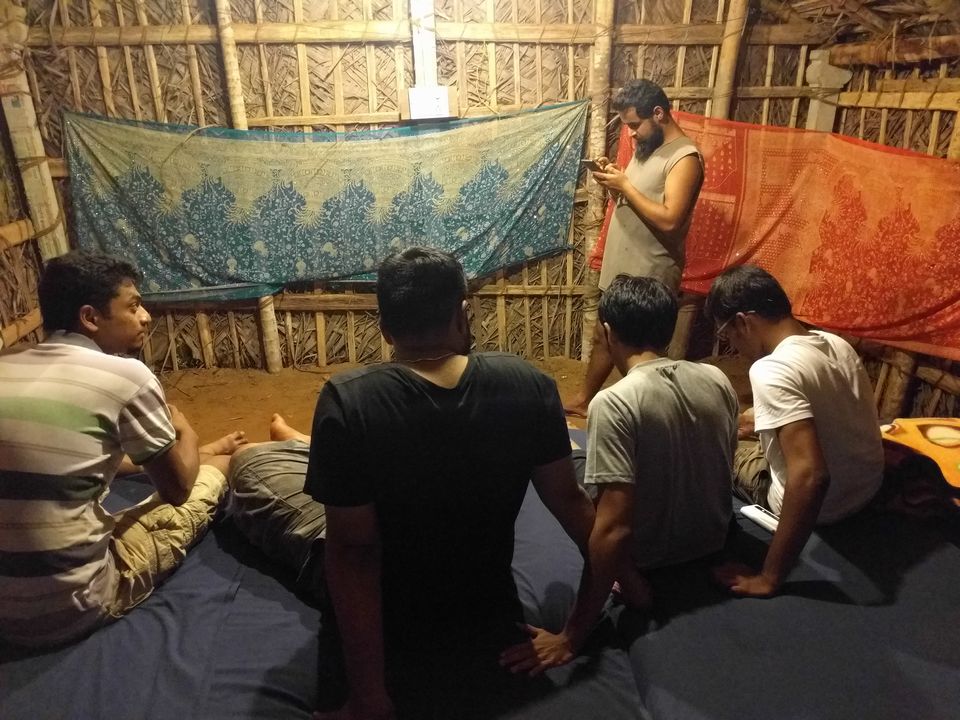 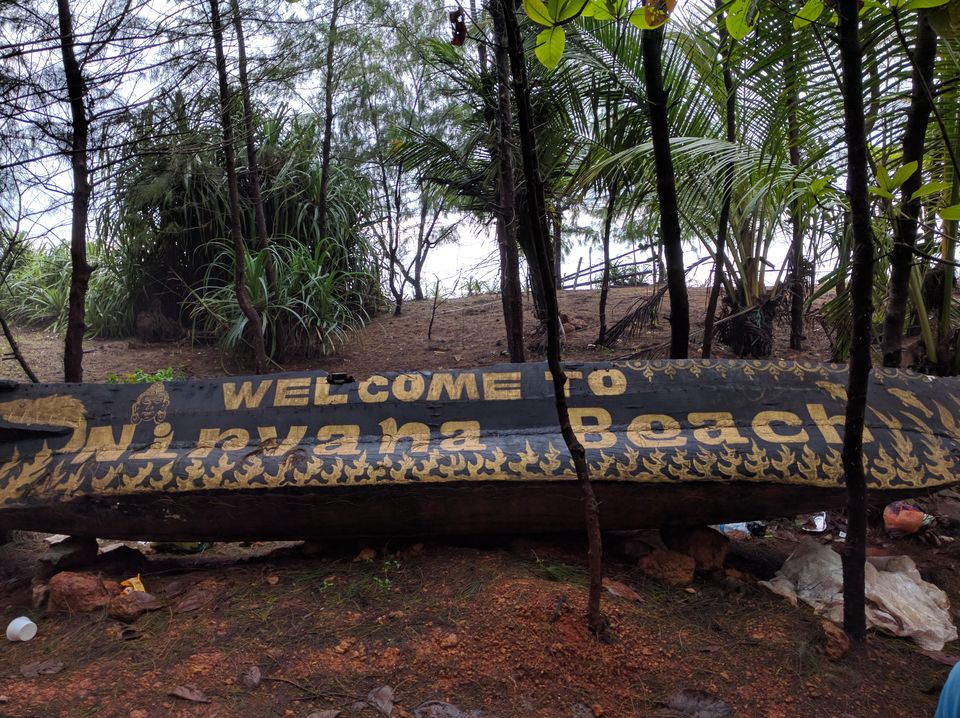 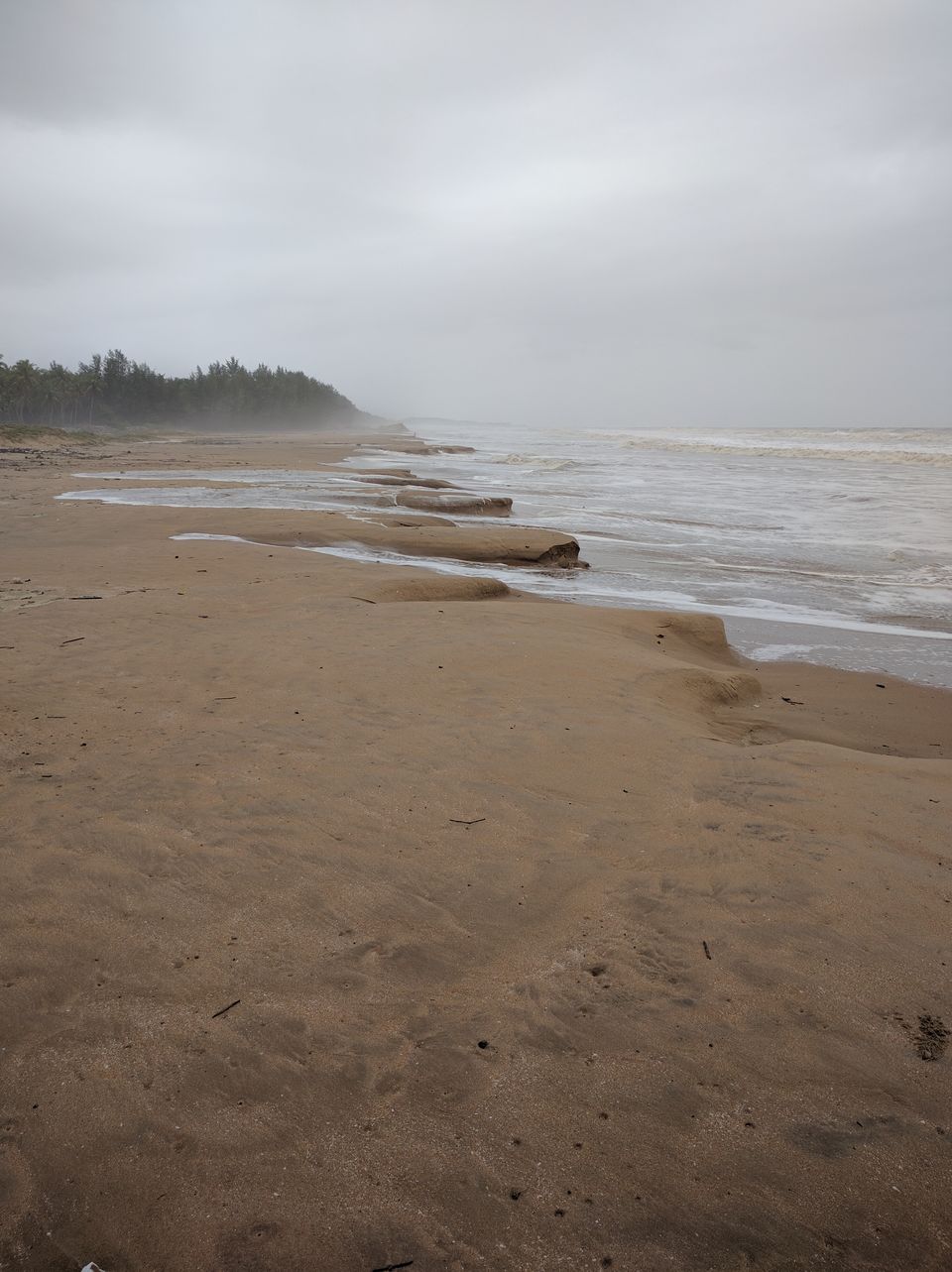 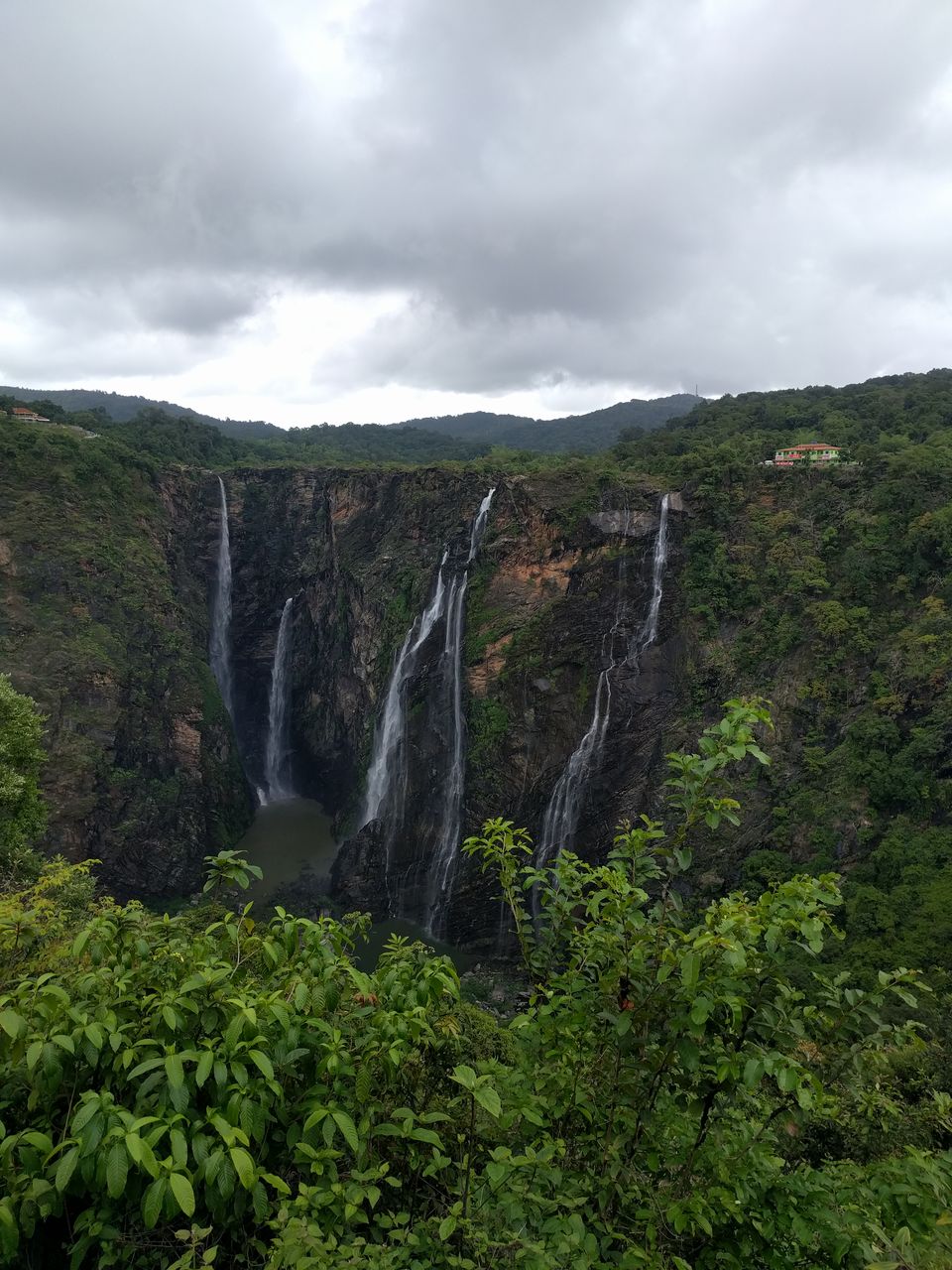 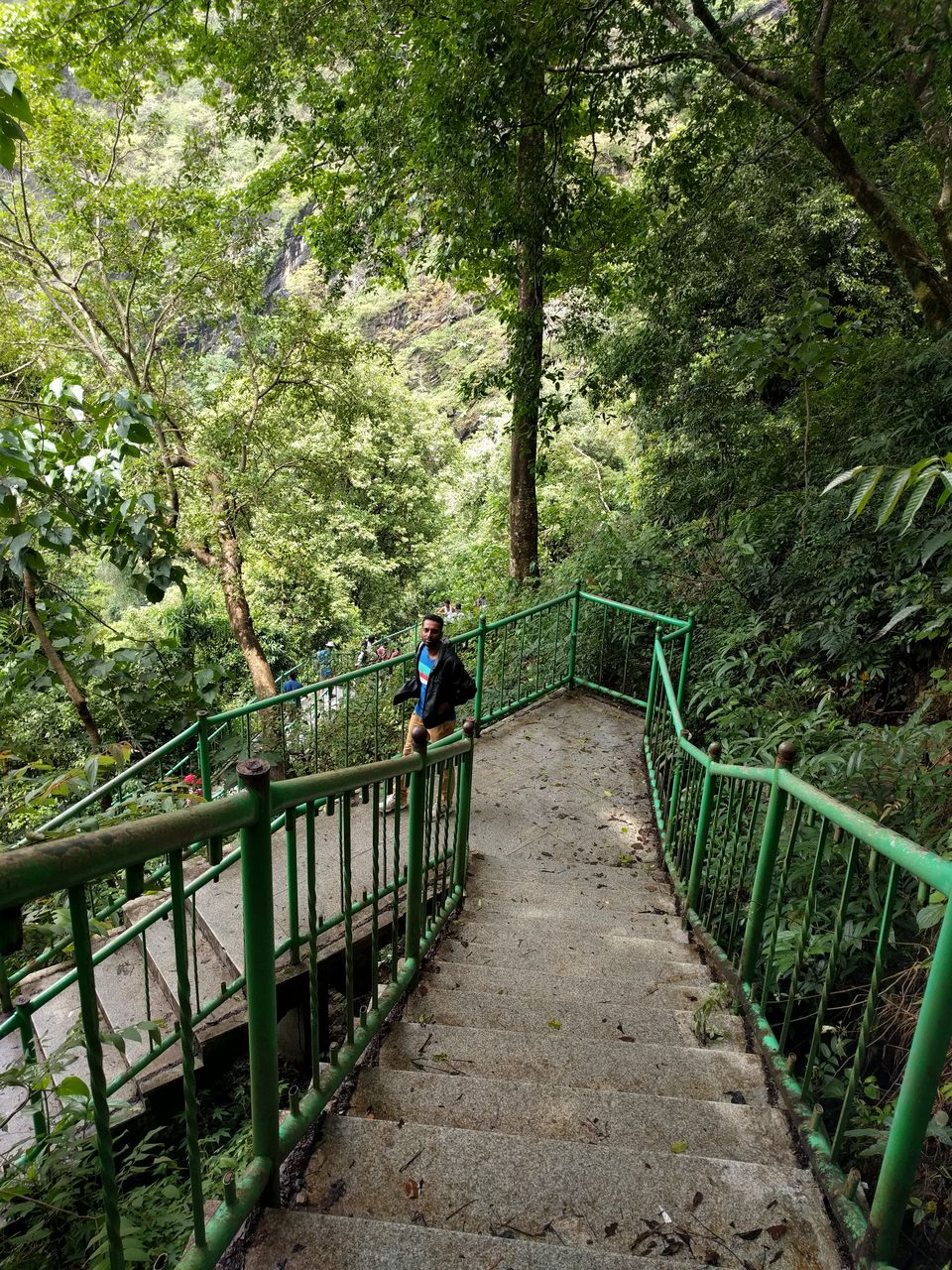 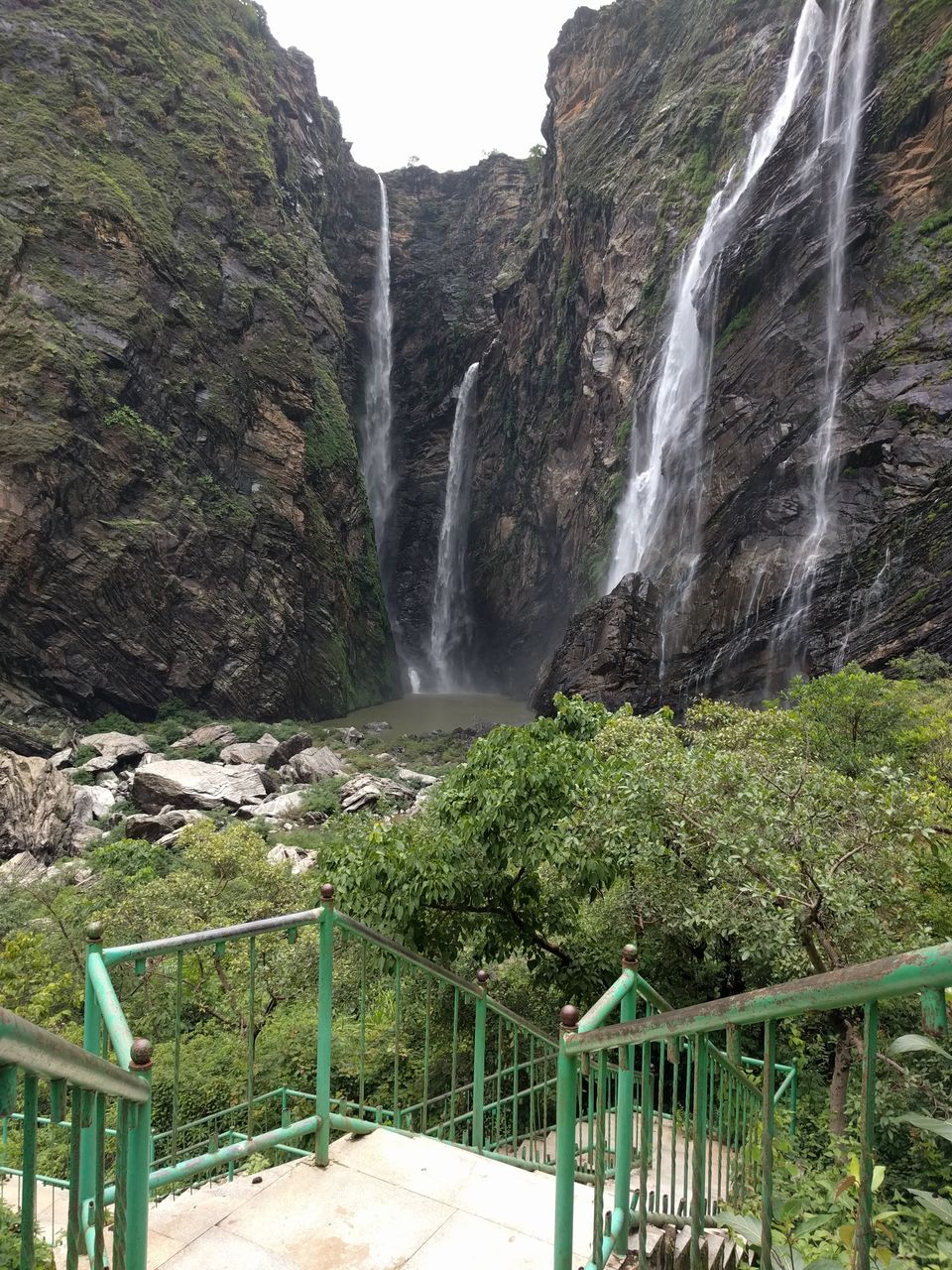 So the next stop was in a place called Yellapura passing Sirsi on the way. Our plan was to visit Sathodi Falls from yellapura in the morning and then head to our next destination. Sathodi Falls is one of the beautiful falls which is almost 30kms from yellapura deep inside. There are no proper roads till the end , yet very few buses do reach the near by village. You can also see a large river bank on the way to the falls.

So as per the plan, some took the bus while some came in car. I was fortunate to get the drive through sirsi in car as the weather was foggy and covered with mist everywhere. And the roads along with the sight through the window made us forget all the incidents of the previous day and made us feel like we were in a mystic land.

The road to Sathodi Falls 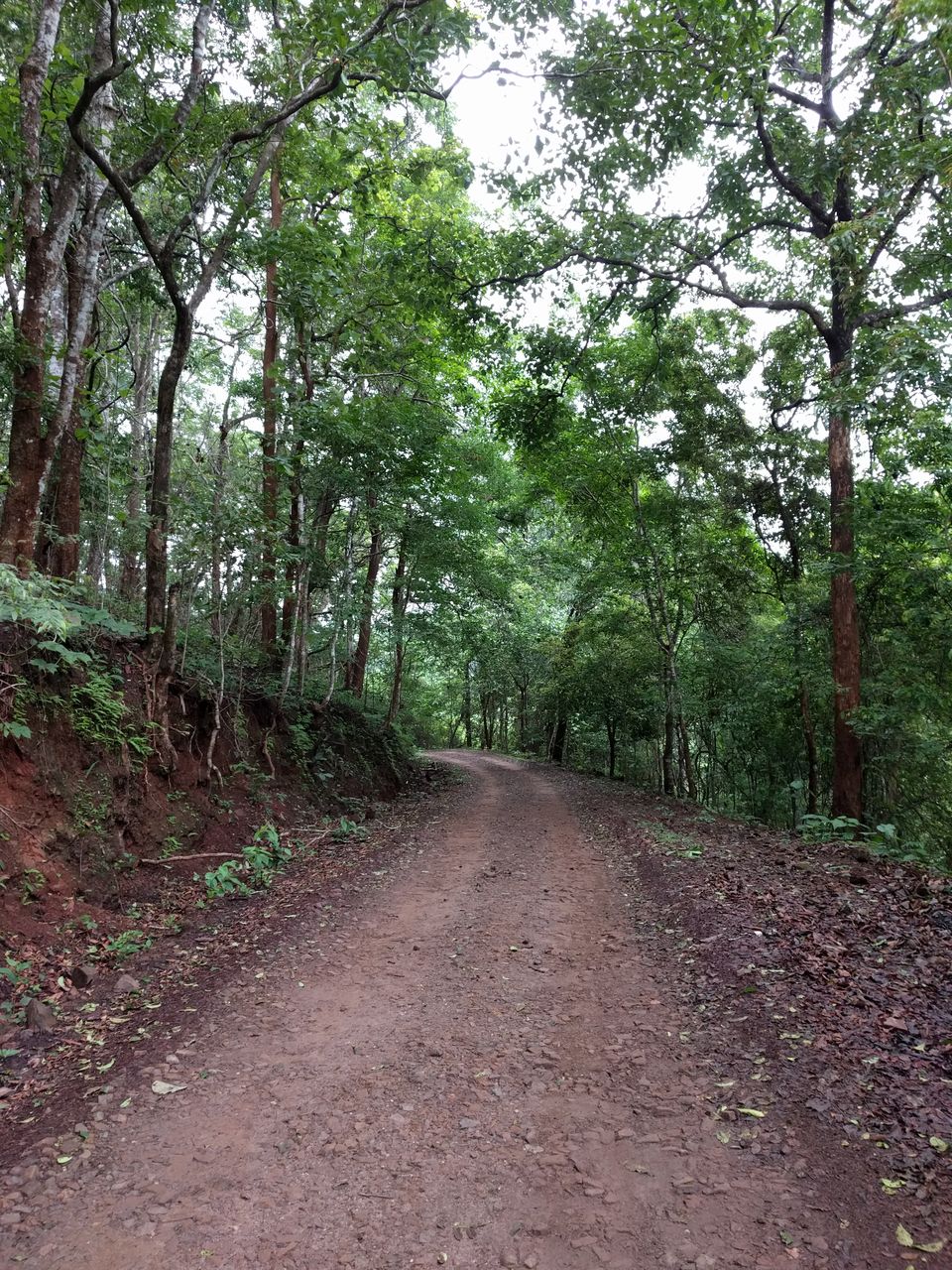 So all of again united at the hotel(I forgot the name of the hotel and there are very few good hotels in yellapura) which we had booked in yellapura. Since there was very few buses for this place, we decided we’ll make 2 trips in our car for this place. There doesn’t exist any proper roads(though they were constructing it at that time) to this place and 30kms distance almost took 1 hour for us. But once you reach the place, everyone were awestruck by its beauty. 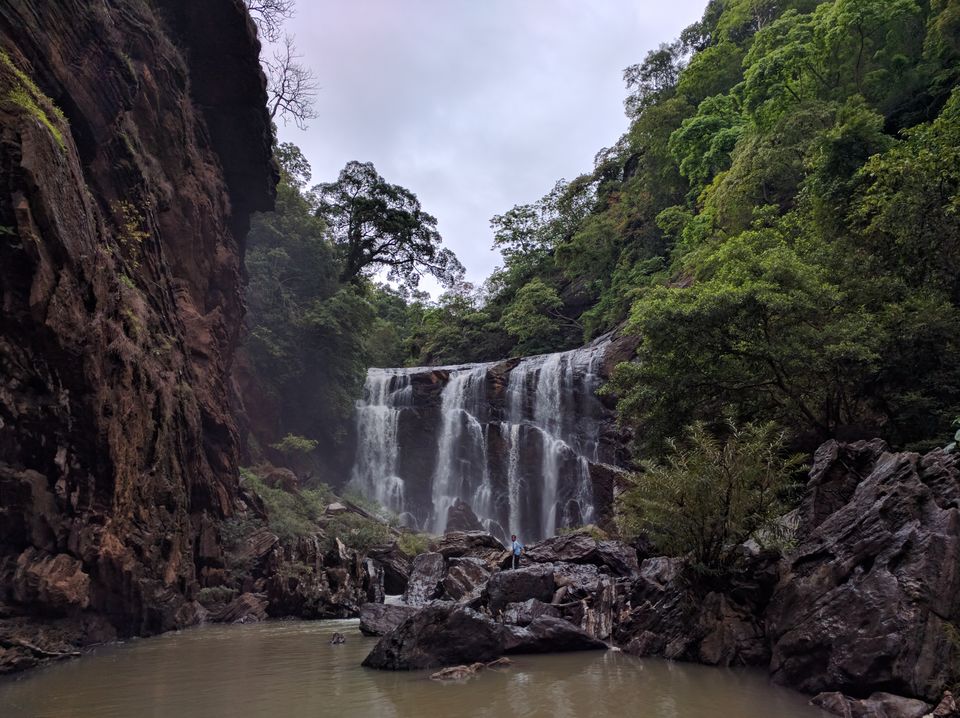 Path to go under the falls 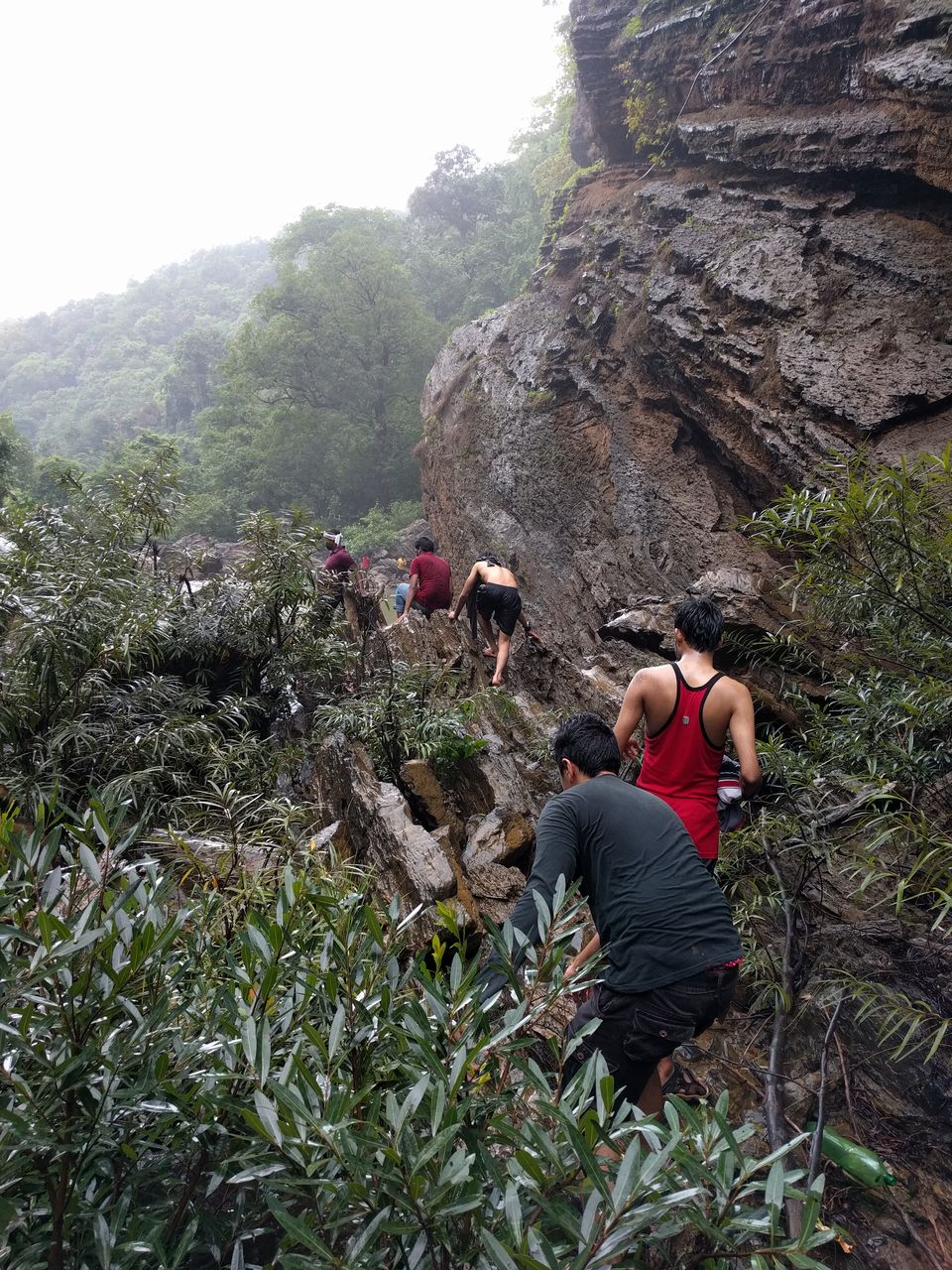 The closest we could reach 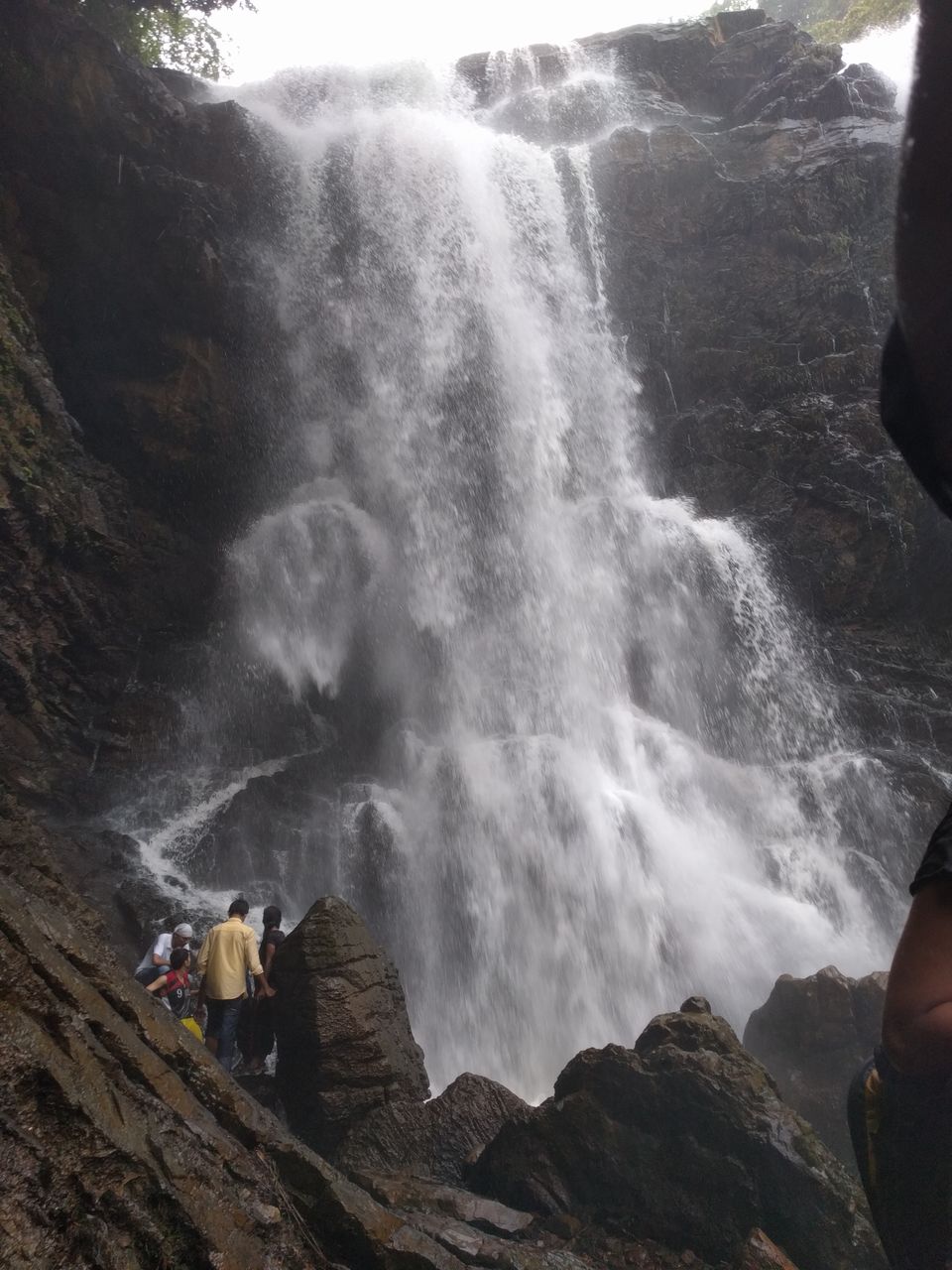 Our Next plan was to reach Gokarna. We found out that, there’s ferry ride which is almost 1 km from that place, which will directly take us to gokarna while the car road takes almost half an hour from there.

So we took the last beautiful ride of the day and reached the most famous place in gokarna – Om beach to watch the sunset.

On the way to the ferry ride 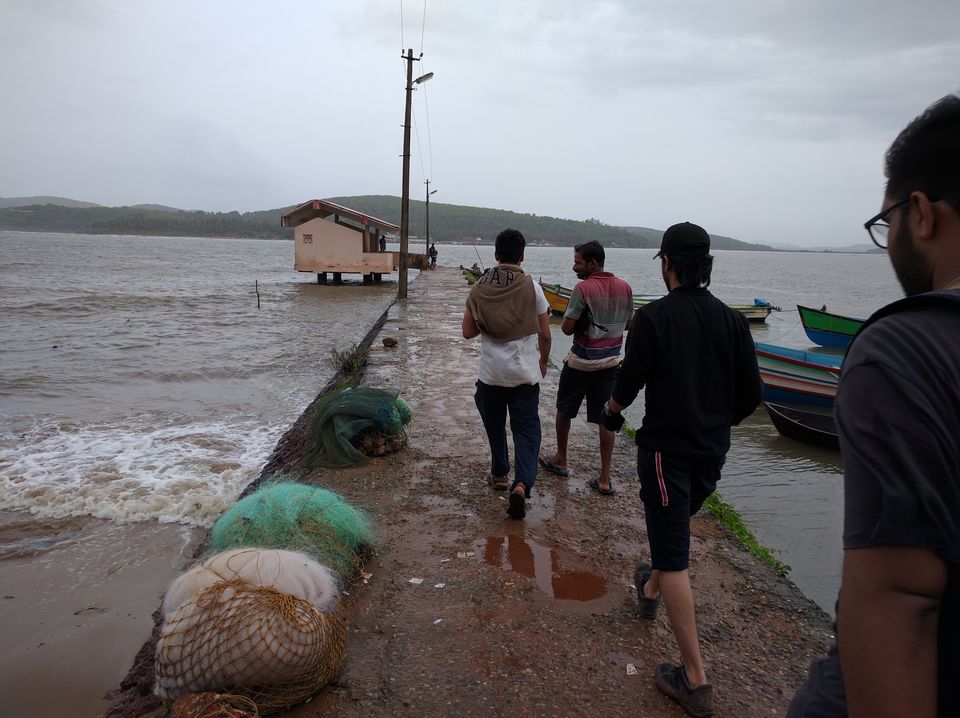 Our Ride for the day ! 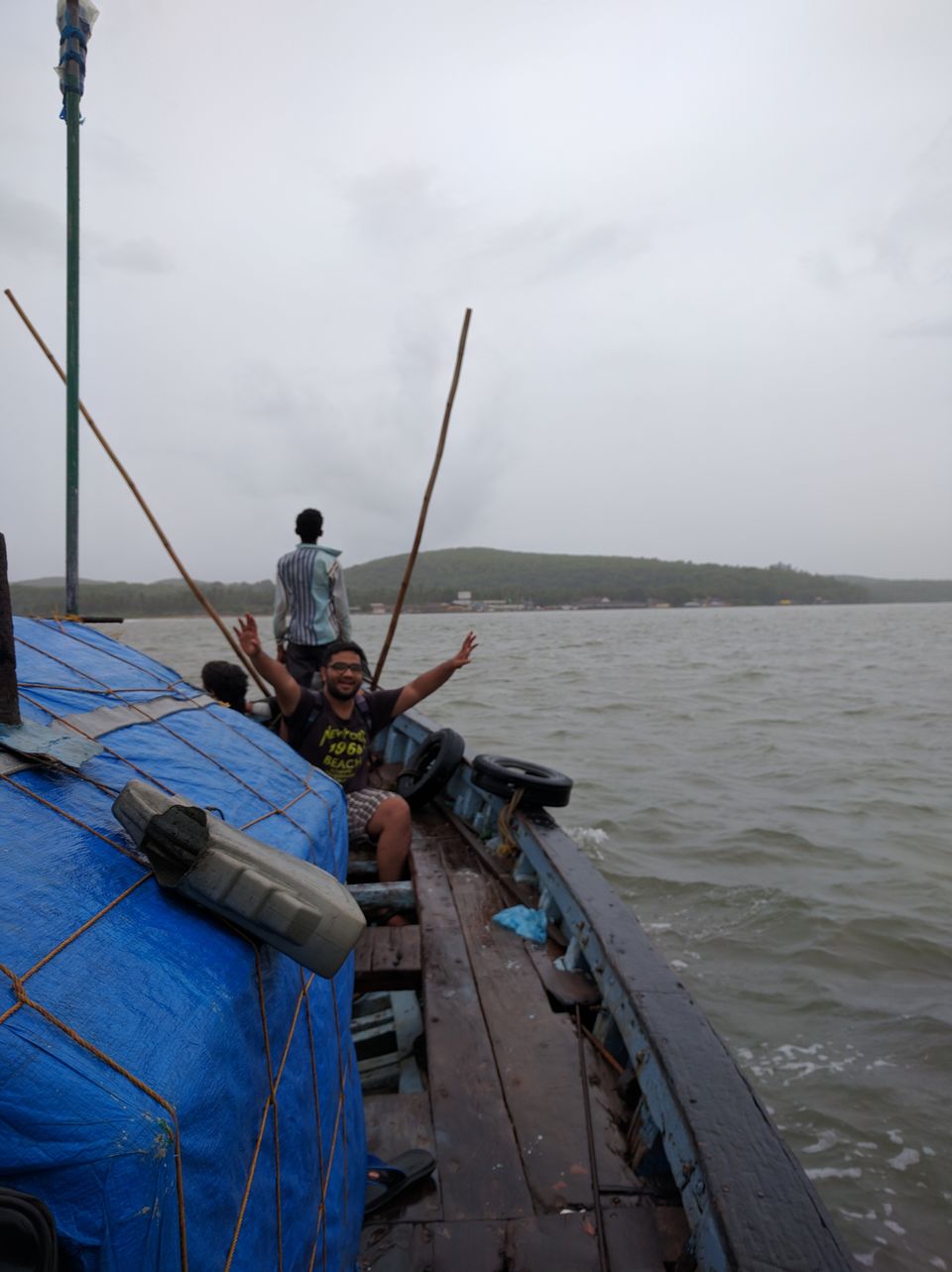 After spending some time on the beach we went to the dorm which we had already booked in gokarna. 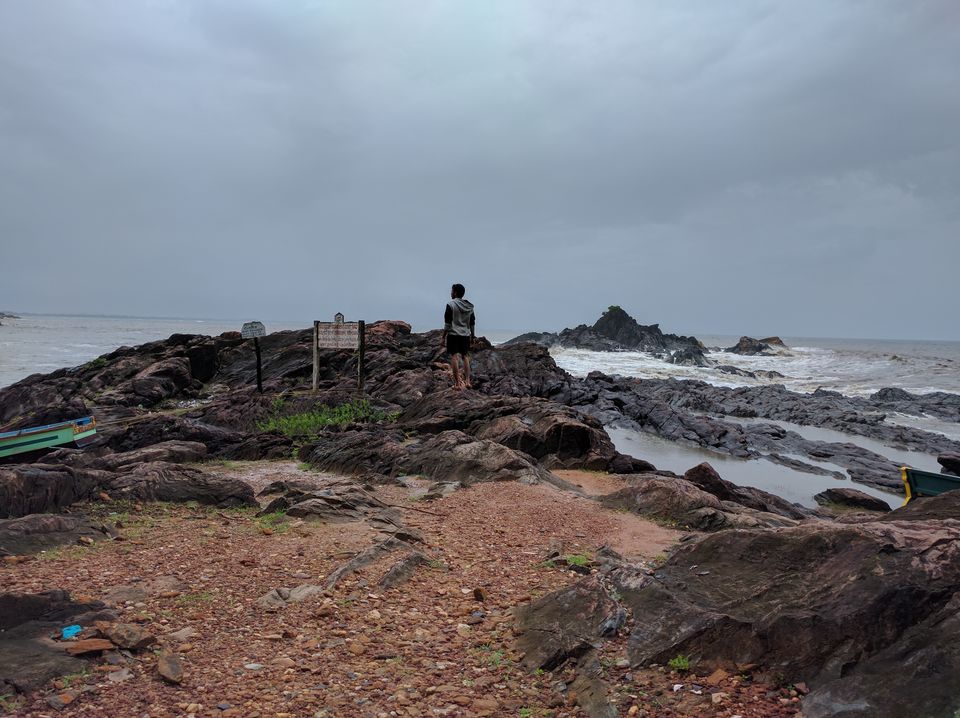 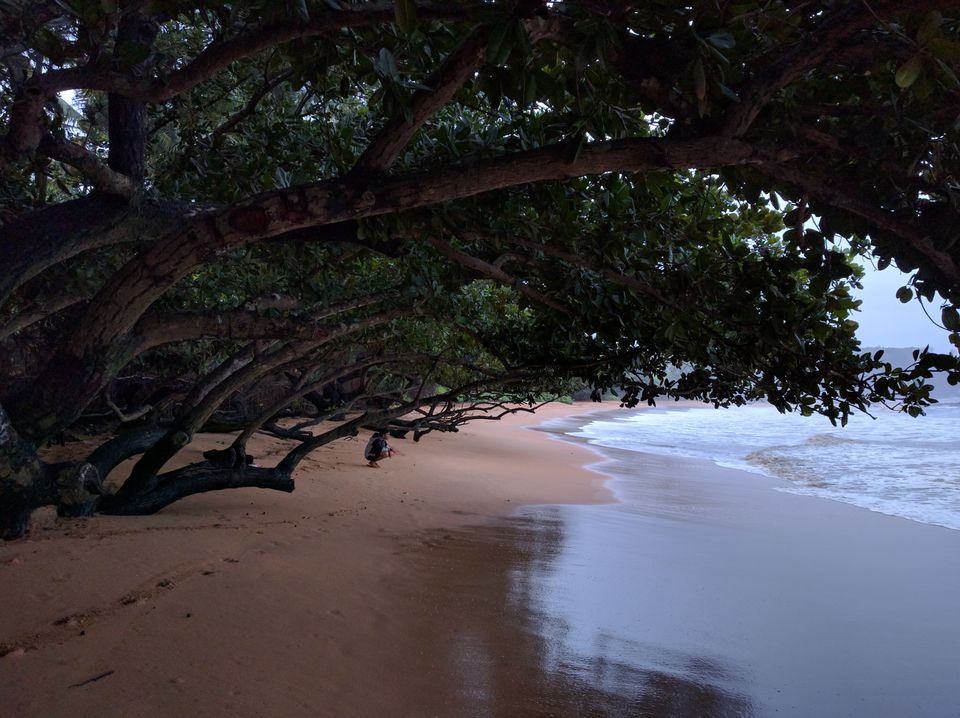 We then decided that some of us will take the train back home while the rest will come back in car . So we spent the next day visiting the nearby gokarna temple and headed to the gokarna railway station. And there we bid adieu for the other group and we boarded the train . 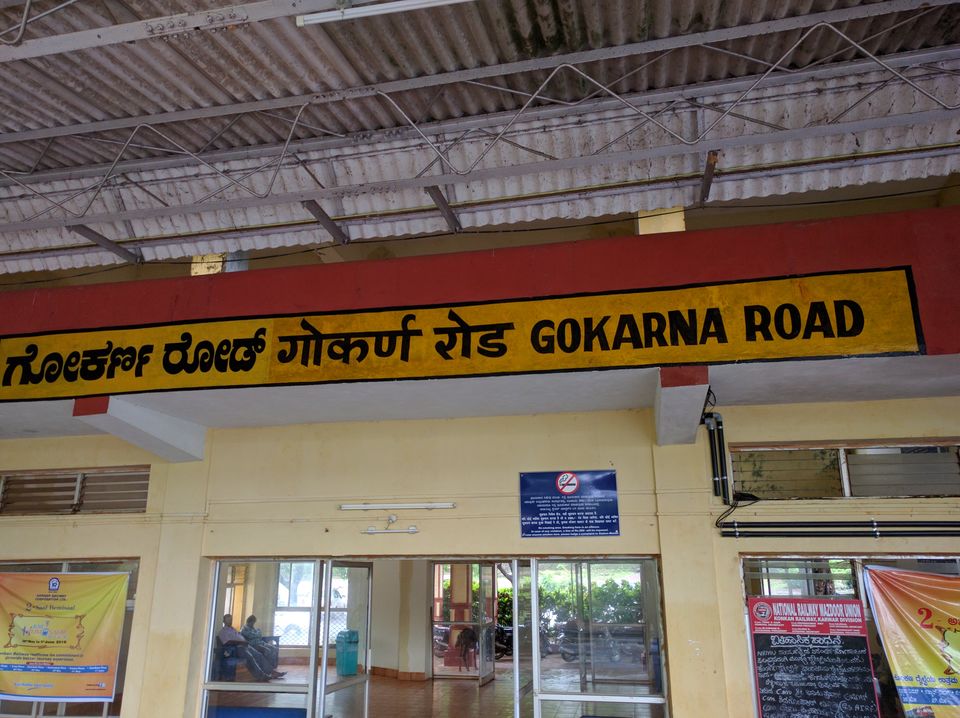 So people, please don’t try to stick to your itinerary. Do some research about the places but always be ready to make plans on the go. We learnt this the hard way !

Sit Back, relax and enjoy the moment .