My first solo trip- Part 1- A Monday in Mandi!! 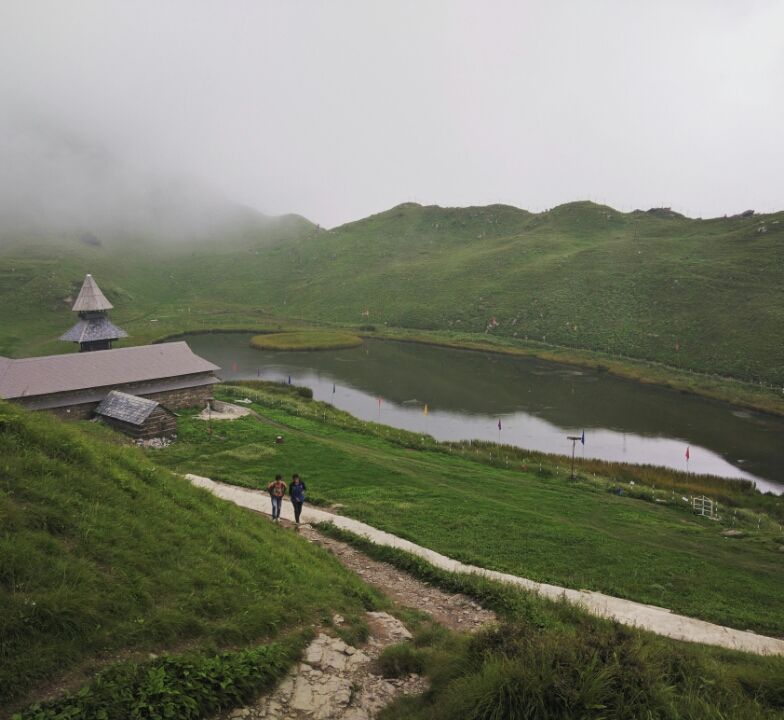 So finally the account for travelling for this year opens! After slogging for hours and hours at work, I finally manage a week's off, and decided to do what I always want to at the drop of a hat- run to the hills! So, I asked a couple of friends to join me, but after getting turned down by most, I decided to do what had always been on my list, but quite frankly never mustered the courage to do- travel alone!

And so, after much convincing, my parents gave in to the idea that I had travelled much and now I am pretty equipped to be traveling solo. With their due permission, I embarked on my very first solo trip as a female traveller. My destination - mandi and kasol!

For many, Mandi would seem like an odd choice, but about a year ago, one of my friends had shown a picture of the Prashar Lake. And I was so mesmerised just by it's picture that I just had to come here.

In about a day, I plan my itinerary, made the bookings and decided public transport to be the safest option. I took a 10 pm bus from Kashmere Gate ISBT, Delhi on Sunday night, and in about 11 hours I reached Mandi bus stand on Monday. I had done much reading about Prashar Lake, so I knew that I would get a bus to Baggi village from this very bus stand. So I checked into a hotel which is a half an hour walk away from the stand, freshened up and started for my visit to the lake. I reach the bus stand and ask around some people about how to go to prashar lake. And I must say, no matter how much you prepare yourself by reading, you always (ALWAYS!!) learn by actually doing. And I learnt that there are two places by the same name but they are pronounced differently locally- there baggi village (pronounced bug-gee) and there is baggi village which is pronounced as "baag-gee" here and this is where you should take a bus to. Unfortunately, there was only one bus plying between mandi and baggi at 8am and I had missed it by an hour and half. So, I asked around where I could get a cab from, because I had only planned a day for this, I was running out of time and I kind of got frantic about it too. Luckily the auto stand and taxi stand is quite near the bus stand. For a trip all the way to prashar and back I paid 2k for the cab, which seemed kind of right because, in one of the blog's that I had read, a guy had taken a cab till baggi for 600 bucks, so 2k seemed fair for going all the way to Prashar and back. My cabbie was quite a calm guy, (who seemed to know everybody in Mandi) had some mean driving skills! I say this because the road to Prashar Lake is quite smooth except at the last stretch. It is not even a road, it's basically a path which is not really motorable, but cars and to my surprise even the lone bus from Mandi, take this path to Prashar. As we drove n our way to the top, we met frequent warnings about mudslides and landslides and loose rocks falling on you. The driver also showed me the spot where a cloud burst happened last year, reassured me that such things are not a regular feature of this place and carried on. It felt like forever to reach the top on that rocky and broken road, and as we were about to get to the top, the place started getting covered by clouds and there was this one point where we were almost driving blind on this very narrow road. Soon, we reached an HPPWD sign board that showed the path towards the lake.

The walk to the lake is quite small and easy, half the path is made and half of it is broken and I think still under construction. Soon, I was accompanied by a dog on this little trail. I must say, I had only heard of this, that the dogs of the hills do this very often, or may be, they sense that people need company. Anyway, this cute one followed me till the temple. There is a small gateway which you have to cross, and you see the lake and the pagoda structure of the temple beside it. And it is very seldom that what you see for real is exactly like the pictures that you find on the internet. Of course, my clicks of it would be a little different because it was covered by clouds. It is also said that, the lake offers a different view at different time of the year and it looks just out of this world when it's covered with white snow during the winter. I, however, could only do one adventurous thing at a time, so I stuck to visiting it during monsoons, it doesn't offer any lesser of a view now either. After paying respect to sage Prashar and making small talks with the care takers and the priest about the temple, I headed back to my hotel. 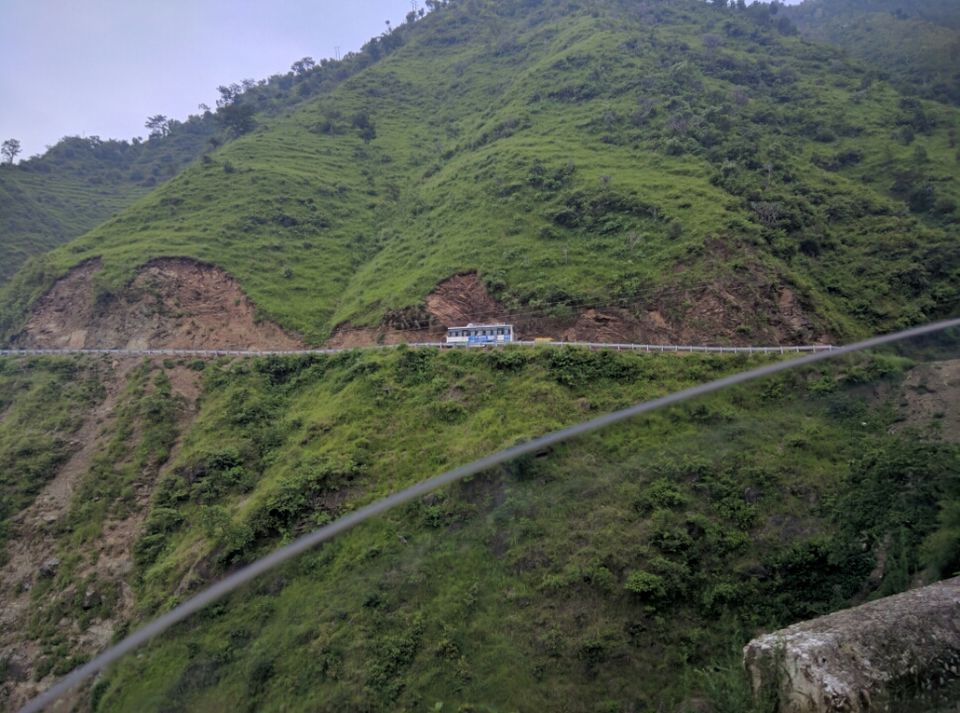 The broken road towards Prashar 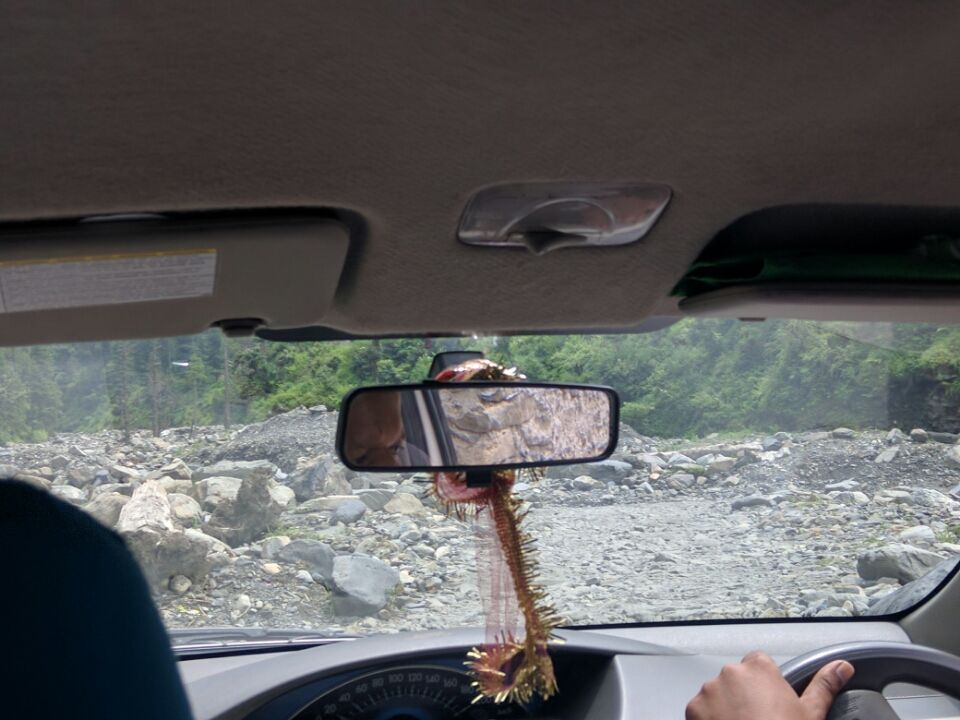 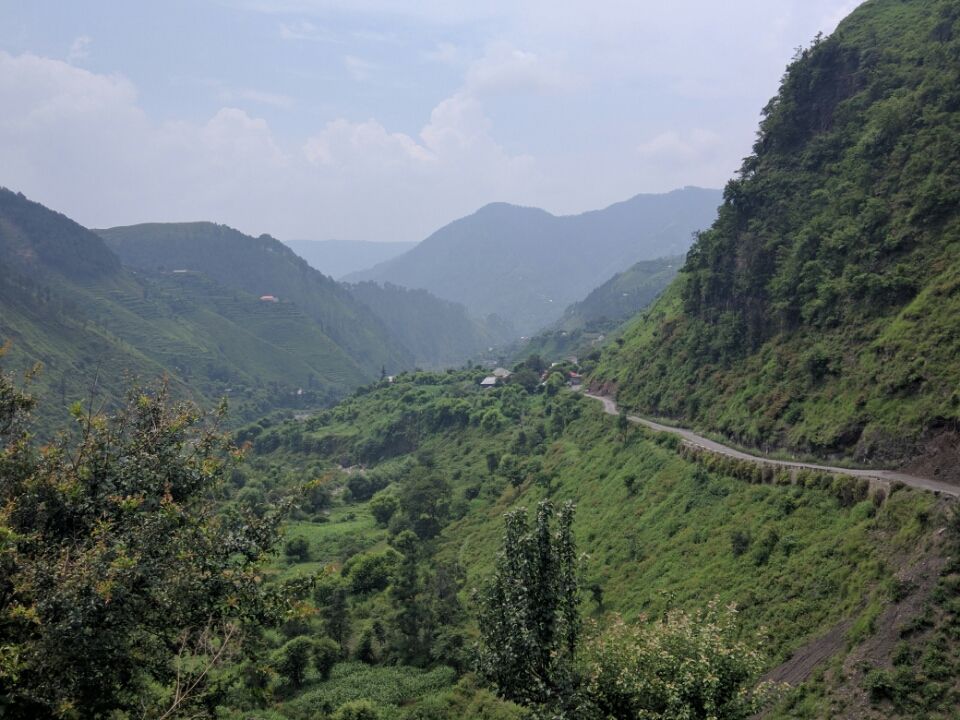 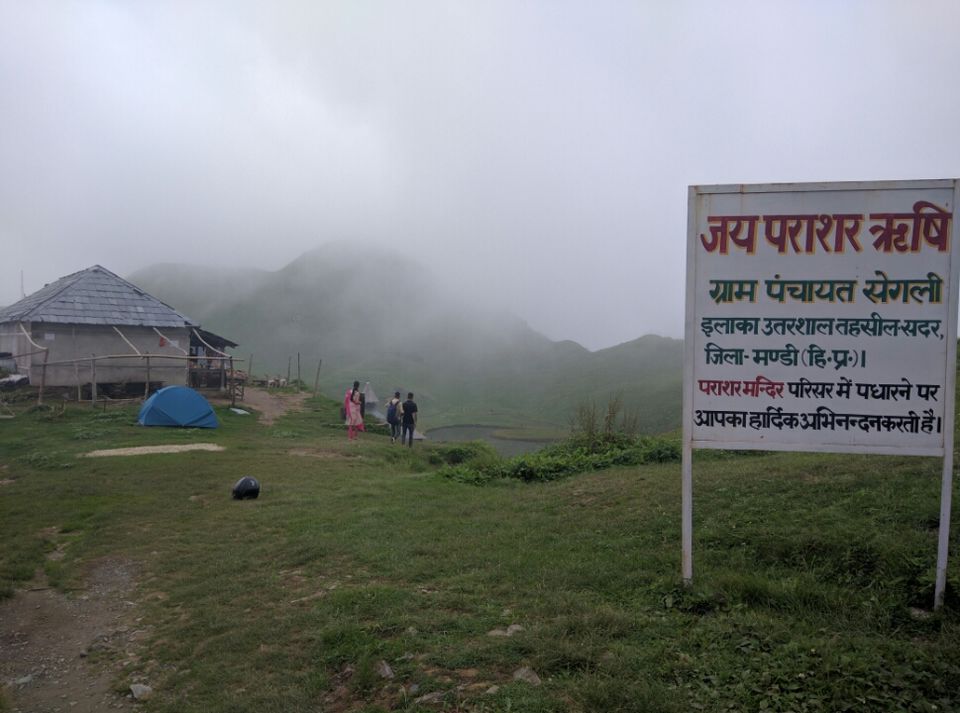 This view!!! Lake Prashar and Prashar temple on the left 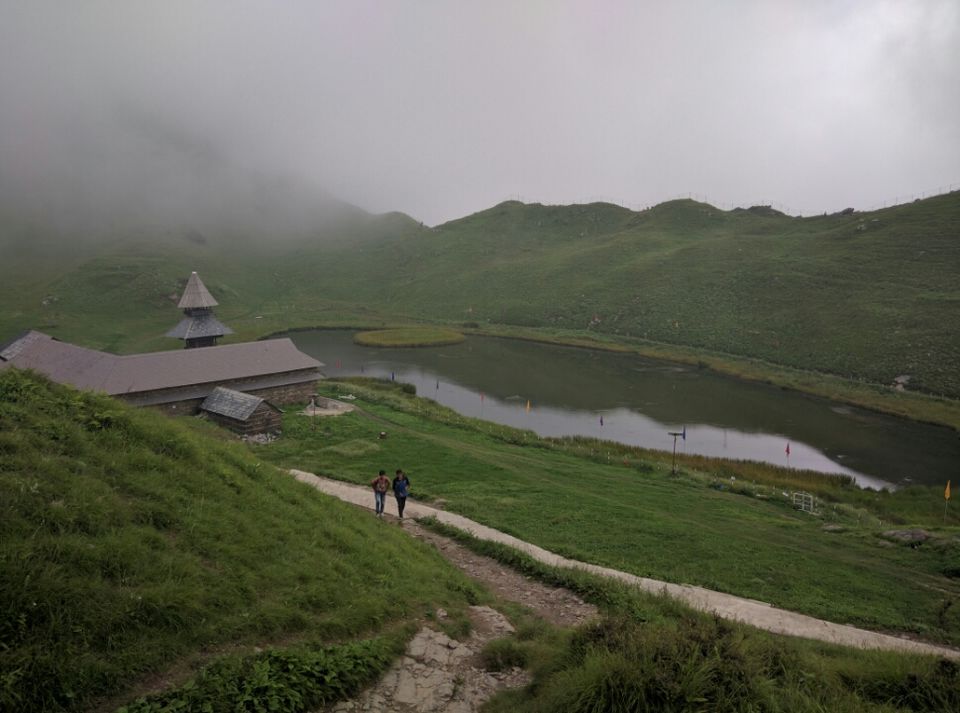 The clouds slowly engulfing the peak 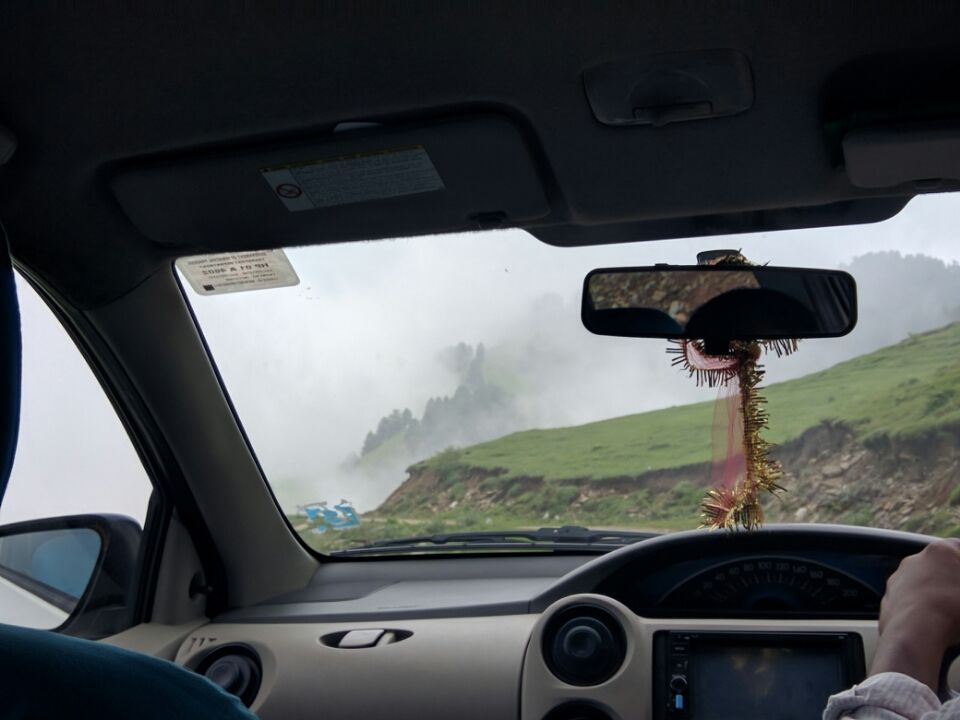 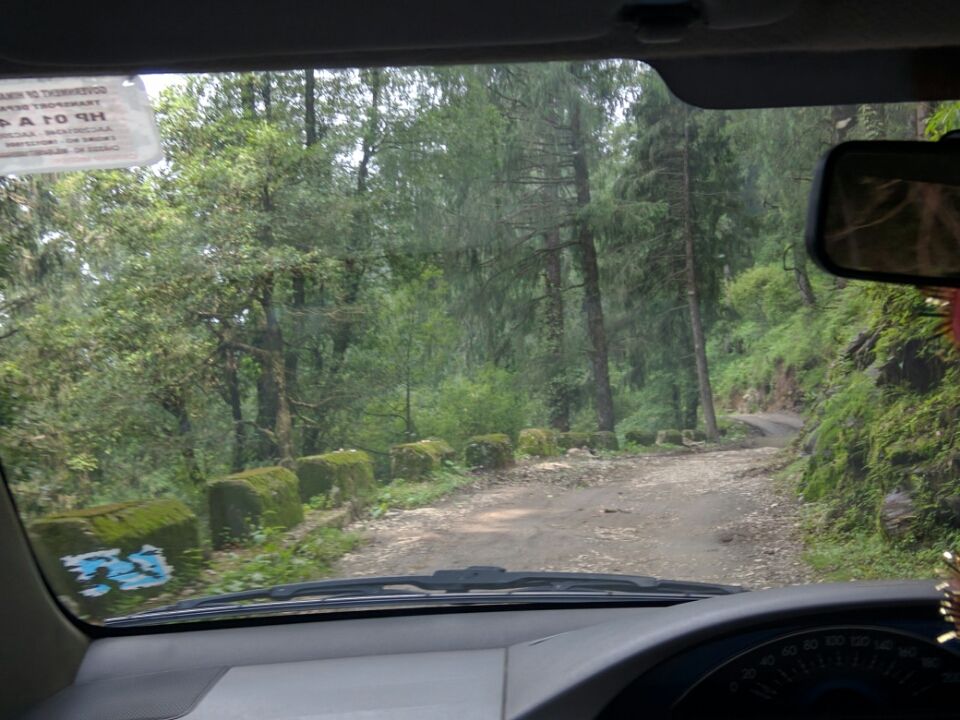 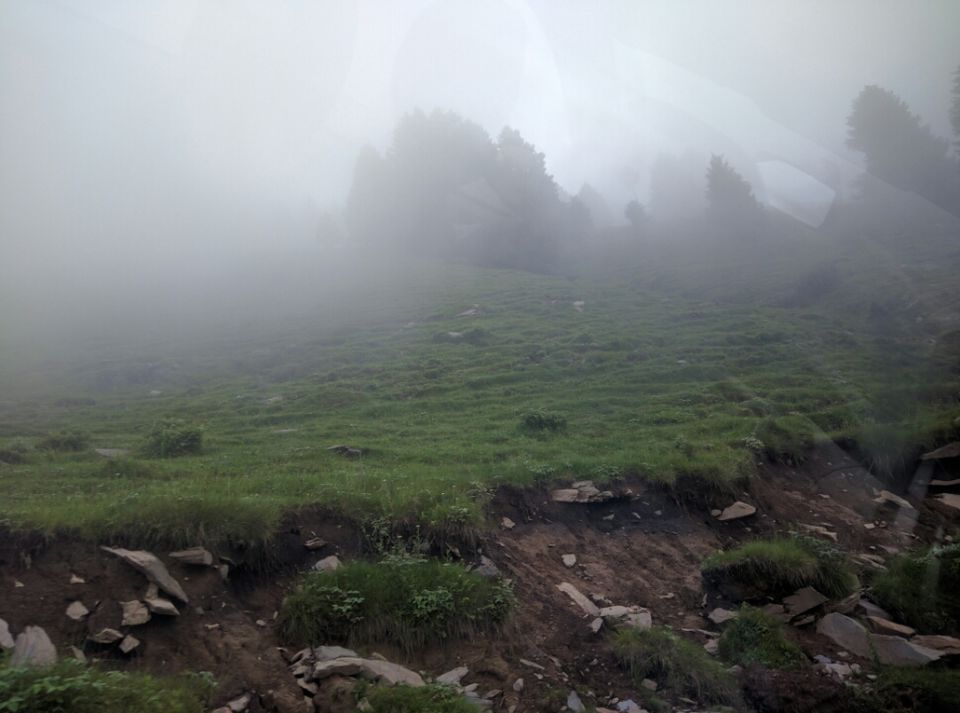