Bike Trip to Pondicherry along the East Coast Road!!!

Pondicherry is the first thing which comes to people's mind when they think of a weekend one day trip. Be it a bus ride or a car ride, it is always awesome to travel through the Scenic East Coast Road along the east coast of Tamil Nadu. But me and my cousin decided that we should do a one day bike trip to Pondicherry in a week day. And it worked out very well and we decided to travel in his Bajaj Avenger bike despite strong opposition from our parents

So we started out from his house at 7. am in the morning and after filing up petrol we proceeded towards tiruvanmiyur to enter the East Coast Road. We decided that we should have at least 5 to 10 pit stops in between. So our first pit stop was at Hot Chips, palavakkam to finish our Breakfast. After finishing our breakfast we proceeded with our journey. The bike ride was scenic starting from view of Bay of Bengal, lush green rice fields and fishing villages. We stopped and Mutukadu and Paiyanur in between to take pictures of lush green paddy fields which is a rare sight in the East Coast Road. After taking picture at various places we stopped our first place to visit was the awesome ruins of Sadras Dutch Fort 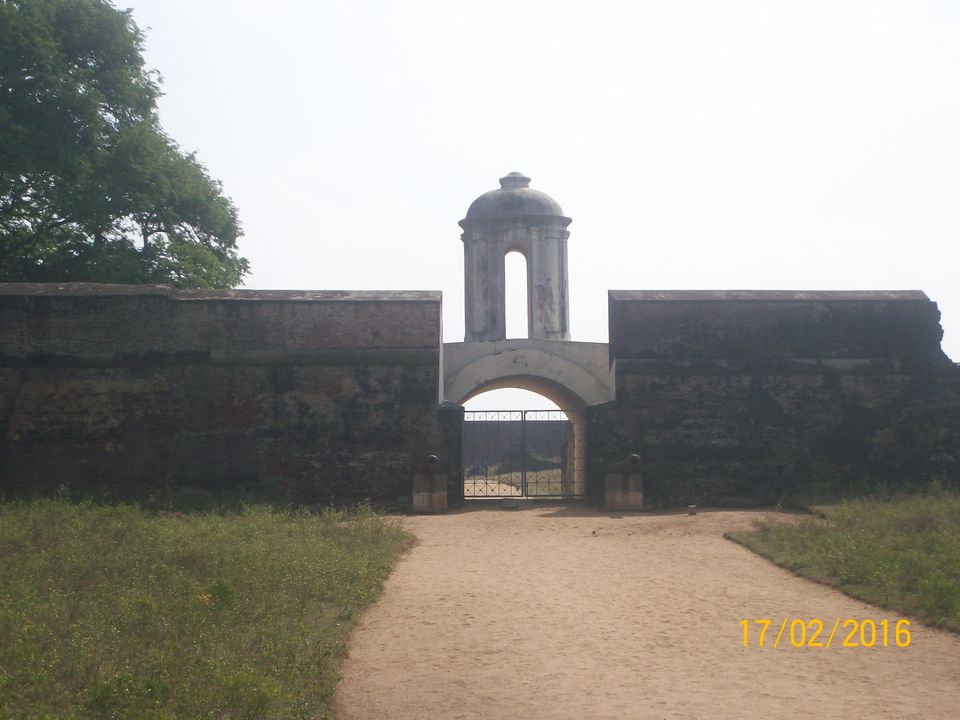 Sadras dutch fort is an ancient ruins 4 km from the Vengapakkam in the east coast road.This fort was built by the dutch in 1700's and was destroyed by the British in the Sadras war.The fort ruins is a protected monument and is of national importance . Sadras is the about the history of how the town of Rajanarayanan Pattinam during the Sambuvaraya rule became Sadiravasagan Pattinam and later changed to Saduranga Pattinam. The name was further shortened to Sadirai and then British called them Sadras. Sadras was famous for export of muslin cloth and this trade flourished during Dutch period.

Presently the fort is under the limits of the Sadras town panchayat. At present a bridge in ECR is being repaired and you have to take compulsorily take the left from Vengapakkam. There is no entrance fee and there are no parking facilities available. You have to park your vehicles outside the main gate or somewhere nearby. The walls of the fort are well maintained by ASI even though the remains inside the fort are crumbling. As you enter the Fort you can see two large cannons on the main entrance to the fort. Once you enter the fort you can see a Dutch Cemetery on the right side and a well on the right side which appears to be built by ASI. Once you start walking in the fine sand path you can see two large store house on the either sides. The store house are large and have been built with bricks. The floors of the store house have been filled with cement recently and is well maintained. The walls of the store house have holes for sunlight to enter. There is a brick well which is abandoned and not used now. Opposite to one of the store house there are steps through you can walk and see the Bay of Bengal. After taking few pictures inside the fort we left that place

To reach the East Coast Road you have to travel through the Kalpakkam Township. And you will never regret that this stretch will be the best part in your entire travel. The Kalpakkam township consists of residential apartments, schools, colleges, hospitals, temples, churches, military area, township hall and finally the Department of Atomic Energy. The Kalpakkam beach is also accessible from the Township. The ride through the township will be serene and beautiful. Roads are well laid and there is no traffic inside the township given the fact that all vehicles going through ECR have to travel through the township. Then proceeded in the ECR and our next spot to visit was the magnificent Alamparai Fort ruins 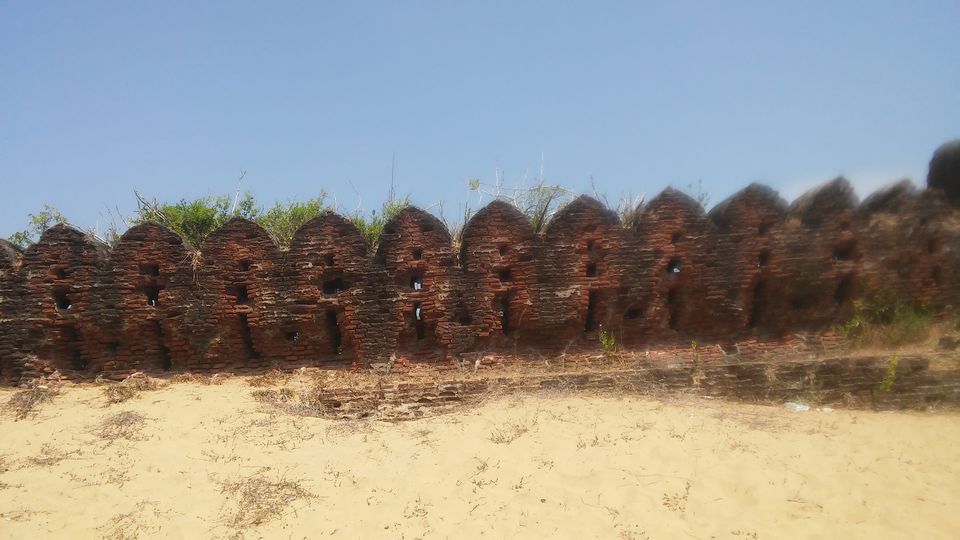 Alamparai Fort and dock yard was built Muslim Rulers during 1700's and was under the control of the Nawabs of Carnatic. The fort is in the shape of a square and was built with bricks and lime mortar. From the dock yard clothes, salt and ghee were exported. The Fort was destroyed by the Britishers in the year 1760 and further damaged by the Indian Ocean Tsunami in 2004

Alamparai Fort is 3.5 km from Kadapakkam in the East Coast Road and 40 odd km from Sadras Dutch Fort. Once you reach Kadapakkam, there is a sign board in the left side of the road which shows direction to reach the Fort. In between there is Alamparai Fort bridge and backwaters used by locals for fishing. The roads leading towards the fort are well laid. However the parking space before the fort is full of sand and most of the time your vehicle gets stuck in the sand. The fort is situated in the backwaters and shores Bay of Bengal.

One thing I could never understand is how could they build such a huge fort in the sand without any strong basement. The sands inside the fort are golden in color. There is nothing great inside the ruins of the fort except for a tomb and staircase which leads to watch tower. From the watch tower there is a beautiful view of Bay of Bengal. Palm trees can be found inside and outside the fort. You can visit the backwaters and beach behind the fort which is full of shells. There are also boating trips to nearby island which can be arranged by local fishermen

We reached Pondicherry by 2.p.m and was badly exhausted by the bike ride for nearly about 6 hours. We had our lunch at Pondicherry Saravana Bhawan and this is not branch of Hotel Saravana Bhawan. Once we finished the launch we decided to start to Chennai as we did not have any time to roam around Pondicherry. We started from pondicherry by 3.p.m and started our ride back in the East Coast Road. After few stops in between we reached Marakkanam and took some photos at the Marakkanam Salt Pans 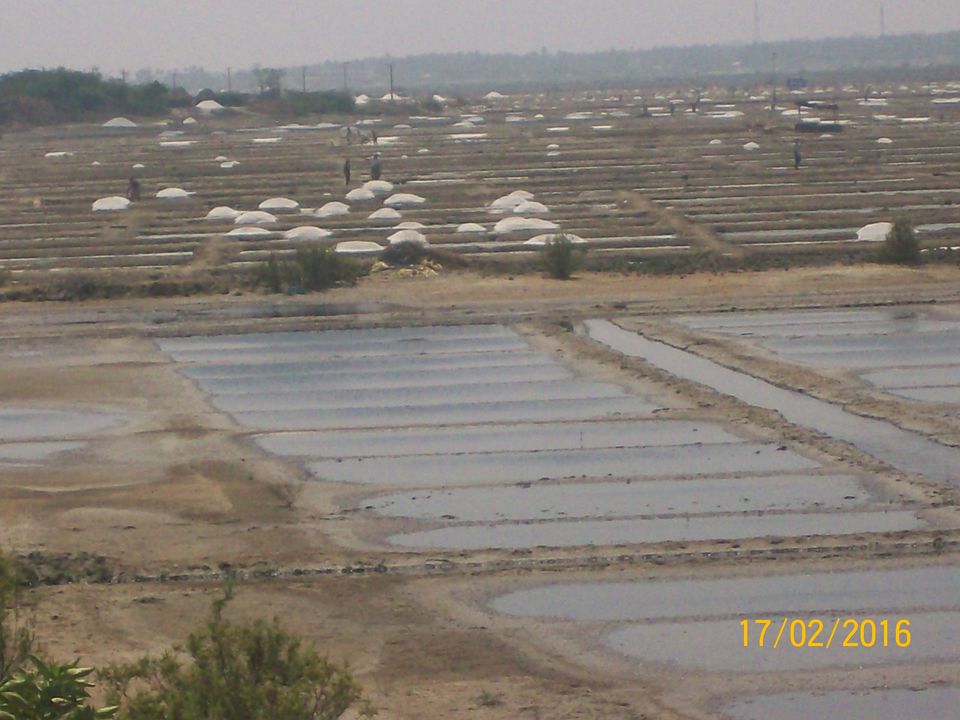 Proceeding in East coast road we then stopped at the Odiyur Lake to take some photos of the lake and the stunning sun set. You can go to the bed of the Odiyur Lake and but do not go near the water. The sands of the lake bed are very wet and they pull your legs inside the sand and your clothes may get spoiled. 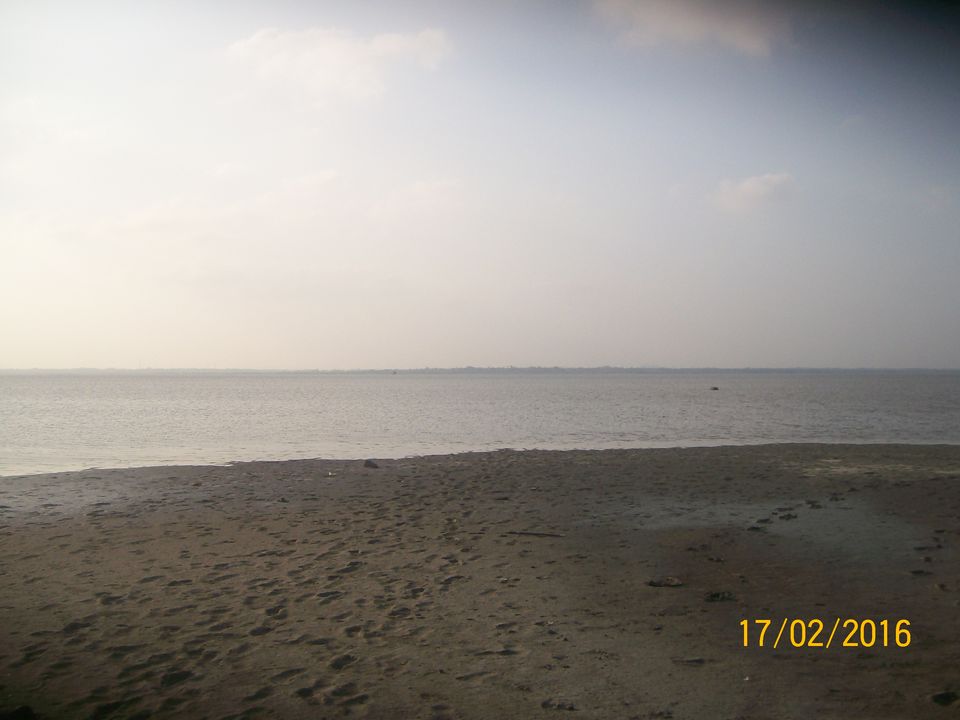 Then we proceeded with our ride and then had a hot Kumbakonam Degree Coffee at a shop in the right of East Coast Road which was energy booster for us. 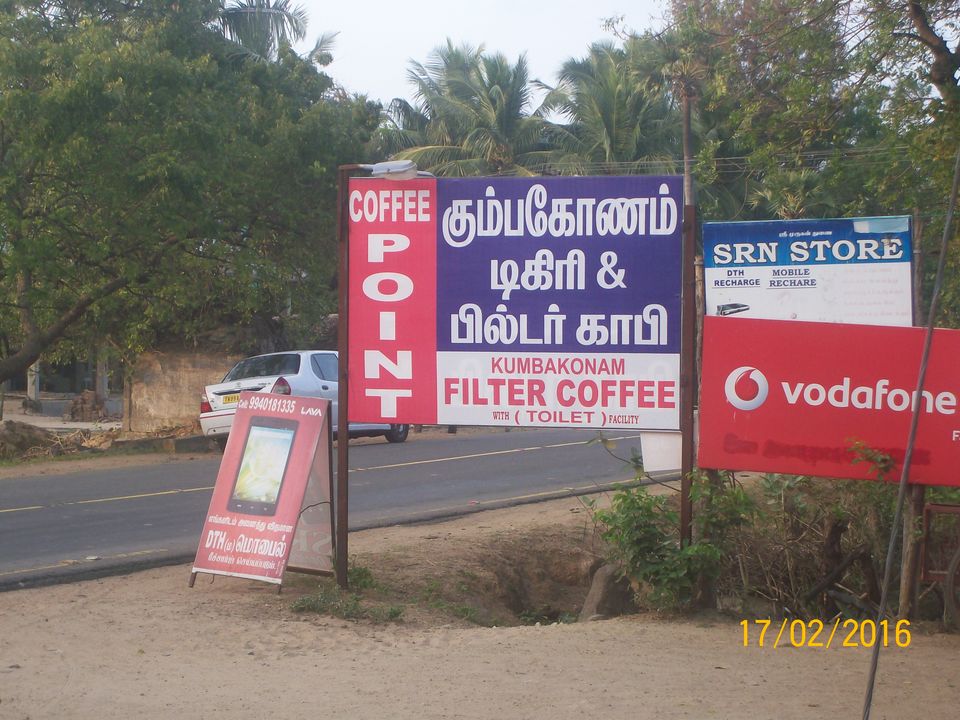 The worst part of the trip started when we were near to Chennai in the East Coast Road. Driving in the East coast road after sun set is a night mare and the road is accident prone. To add to the nightmare, few stretches have been made one way road. That is, both side traffic on the single side of the road which is very dangerous if you are not careful. We finally reached our houses by 10.p.m after having dinner at the Saravana Bhawan hotel.

We know that we did not visit any place in Pondicherry and few places in the East Coast Road. If we visited those places then we would have probably reached house by 12.am and would have fallen asleep on the road itself.

Ruins of Magnificent Alamparai Fort built by the Nawabs of Carnatic in 1700's and destroyed by the British in 1760. The Fort was more damaged by the 2004 Indian Ocean Tsunami